Paris: More than 70 conservative mayors and councillors have pledged support for Emmanuel Macron, in the latest sign that the Republicans, France's centre-right opposition party, is in danger of extinction.

Senior conservatives fear Macron is taking over the centre-right, while hard-line nationalists swing behind Marine Le Pen's far-right National Rally, after the Republicans' drubbing in the European elections, when the party took just 8 per cent of the vote. 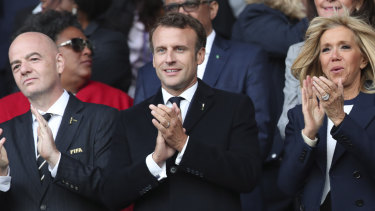 The popularity of French President Emmanuel Macron (centre), pictured watching the World Cup, is a critical threat to the Republicans. Credit:AP

A poll published in Le Journal du Dimanche, showed 31 per cent of party supporters favoured an alliance with the President's La Republique En Marche, while 26 per cent would back a pact with National Rally.

In the latest sign that rank-and-file Republicans are defecting to Macron, 72 right-wing and centre-right mayors and councillors from across France announced their support for the centrist President in a joint letter published in Le Journal du Dimanche.

"We are among those who desire the all-important success of France, which is why we want the president of the [French] Republic and the government to succeed, as nothing will be built on their failure," the letter said.

Noting that many French people "feel abandoned, alienated, left behind," the letter added: "We refuse to let ourselves be reduced to a label, a voting instruction, a party apparatus. Our party is firstly our constituents, it is the Republic."

The Republicans are desperately seeking a new leader after Laurent Wauquiez resigned a week after the European elections.

Macron has taken advantage of the party's existential crisis to renew his charm offensive to gain conservative support. He had already poached many senior Republicans, including Edouard Philippe, his prime minister, following his 2017 election victory.