One of Britain’s biggest cat lovers who shares his home with over 70 cats is being investigated by the police and RSPCA over claims the animals are living in squalid conditions.

Ian, 56, who uses the surname ‘Catmando’, lives with dozens of felines in a small terraced house and claims he trains them up to help people with epilepsy.

He describes himself as a ‘professional cat carer and showman’ and has defended his right to look after the animals at his property in Gainsborough, Lincs.

But he is now at the centre of an RSPCA probe after animal rights activists gathered outside his home last week to stage a protest over concerns for the cats’ welfare.

They say the pets cannot roam free because the back garden is covered with chicken wire, barbed wire and metal bars. 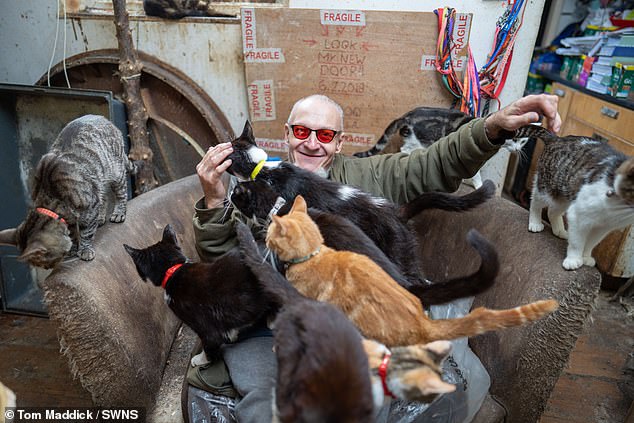 Pictured: Ian ‘Catmando’ who shares his home with over 70 cats is being investigated by the police and RSPCA over claims from activists that the animals are living in squalid conditions 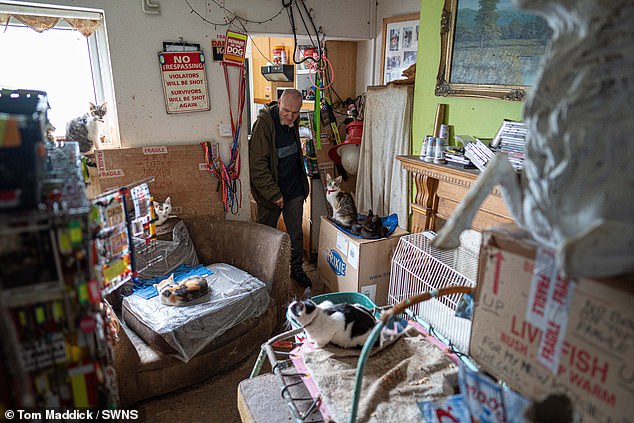 Ian describes himself as a ‘professional cat carer and showman’ and estimates he has looked after more than 5,000 cats at his home in Gainsborough, Lincolnshire (pictured), since 1992

Photographs from inside his house show dozens of cats piled on top of cluttered surfaces and living in seemingly filthy conditions.

But unemployed Ian says his pets are happy and healthy and he has trained thousands of cats over the years without any complaints.

Ian regularly walks up to 15 moggies down the street at a time and claims he also trains them for a PTSD recovery charity.

Ian, who is not married and has no children, said: ‘I’m a professional cat carer and have been since 1992.

‘I’ve looked after over 5,000 cats and trained up 2,000 as alternative treatments for epilepsy.

‘Cats can recognise when someone has an epileptic fit coming, sometimes hours in advance. 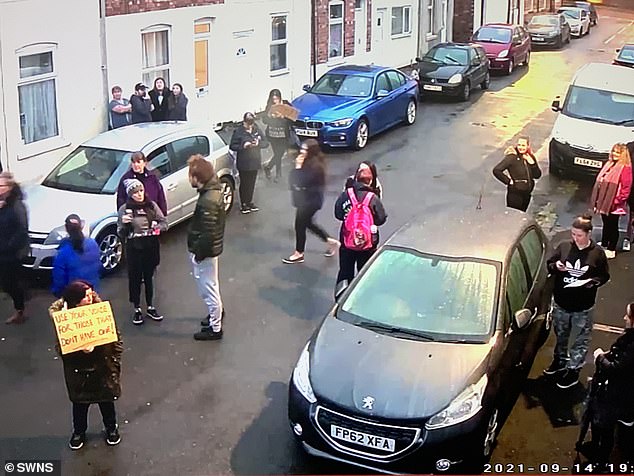 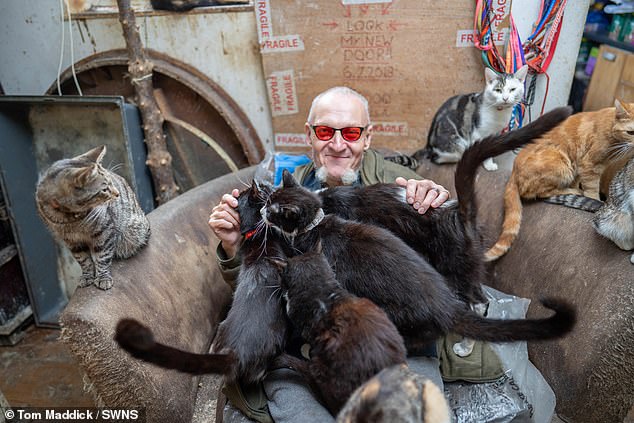 Cat lover: Ian insists he is doing nothing wrong and that ‘everything is legal and above board’

‘I don’t drink, I don’t smoke, I don’t chase women. I sit down with the cats and it takes it all away – plus a room full of cats keeps it warm.

‘If you have 30 cats in a room that is minus five centigrade, within an hour the temperature is well over 20 degrees.

‘Everything is legal and above board. I’m a good person. I’m taking a stand because I have done nothing wrong.

‘I am squeakier clean than a bar of soap. I’ve got no criminal records and no mental illness at all.

‘There’s enough room for the cats and I have the police in the property on a regular basis.

‘They have all said the same: the cats are all healthy and there is nothing wrong with them. 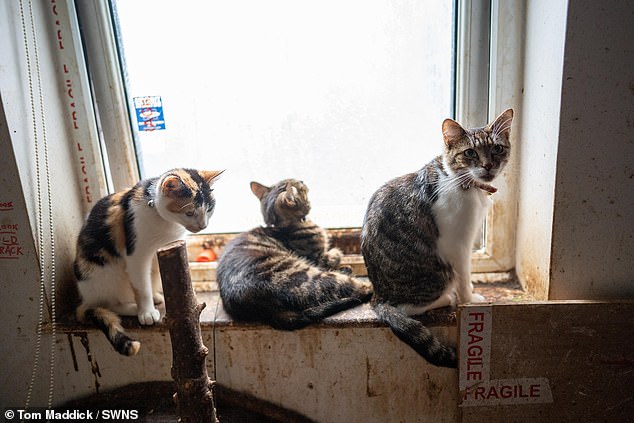 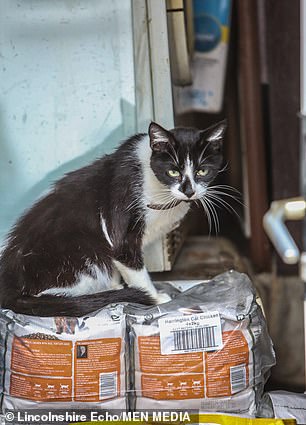 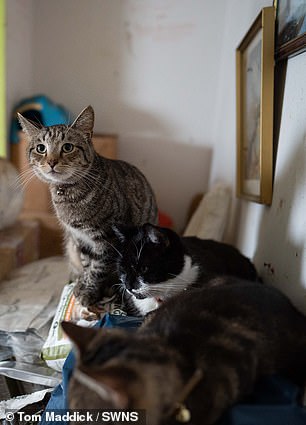 Pictured: Inside the house of Ian Catmando, on Portland Terrace, Gainsborough, Lincs

Ian has hit back at the protesters who have been gathering on his street daily since last Thursday (9/9) and says that the stress caused one of his cats to have a miscarriage.

He added: ‘One of the female cats was pregnant with seven kittens and she’s miscarried. The other cats are seriously stressed out.

‘The protesters reckon it is illegal and immoral to train and walk cats. That’s stupidity, what’s wrong with walking cats if people walk dogs?

‘At the end of the day, if you could pick on people who walk cats, who is it going to be next?

‘There’s nothing wrong with doing something the old-fashioned way.’

Ian says he also tours about the country with some of his cats in a cart as a showman, keeping up his family tradition. 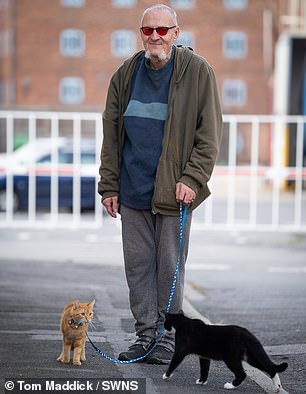 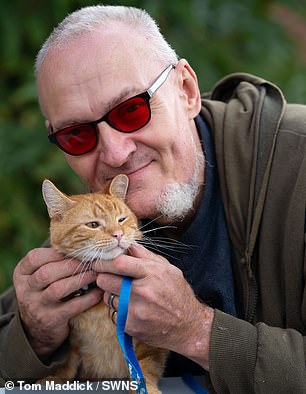 He added: ‘My father was a showman and my grandfather before him. I let people cuddle the kittens and bring happiness and hope.

‘That’s £70 of food and just for one meal for them which I get every day if I can.

‘My cats are well looked after. People cannot go around making allegations about me – the allegations are pure fantasy.’

Lincolnshire Police this week warned protesters to stay away from the property so that the relevant authorities could do their jobs.

‘This was believed to relate to a number of cats being kept at the address. 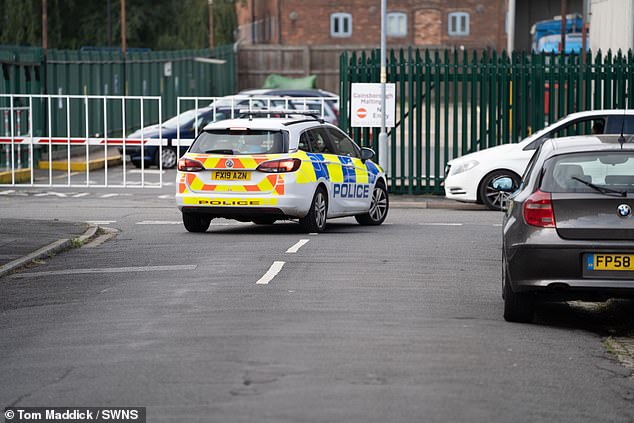 ‘No arrests were made during either incident and on both occasions, the groups left the area.’

‘This is not a police-led investigation however, we continue to work with and support the RSPCA who have the relevant information and expertise.

‘My request is that those who have previously felt the need to gather in the location to please stop doing so as this will support the relevant agencies to conduct their enquiries into this sensitive incident in an unhindered manner.’

An RSPCA spokesperson said: ‘We are aware of this incident.

‘Unfortunately we are unable to discuss complaints about specific people, however we are grateful to people who report suspected animal suffering to us and we would like to reassure people we will always look into and, if necessary, investigate any complaints made to us about animal welfare.

‘A lot of the time issues will be dealt with by advice and education and it is not always appropriate to publicise this information for legal reasons.’

A West Lindsey District Council spokesperson said: ‘We are aware of concerns and are currently liaising with the police.

‘At this stage, we cannot comment any further while an investigation is under way.’