How many Ukrainian refugees has YOUR area welcomed? Map reveals how many visas have been issued under Homes for Ukraine scheme, as Buckinghamshire comes top

New data published by the Home Office has revealed which areas of the country are welcoming in the most refugees under the Homes for Ukraine sponsorship scheme.

The figures put Buckinghamshire at the top, having granted 507 visas. Wiltshire and Cornwall come out second and third highest, having approved 402 and 337 visas respectively.

London boroughs of Wandsworth and Barnet are then fourth and fifth, having given out 311 and 307 visas under the Homes for Ukraine sponsorship scheme.

Other areas that have taken high numbers of refugees include Richmond upon Thames, South Cambridgeshire and South Oxfordshire.

The figures – published last week – are for lower tier local authorities in England, and show that 28,345 visas have been approved since the scheme was launched on March 14.

Across the UK, more than 71,800 Ukrainian refugees have been granted visas through varying schemes, but just 21,600 have arrived. 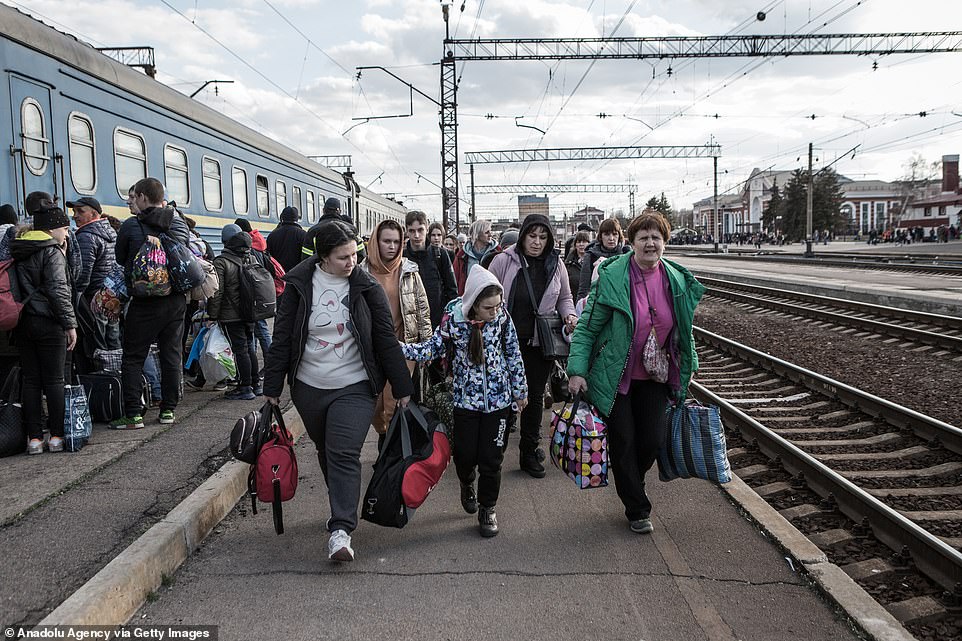 Across the UK, more than 71,800 Ukrainian refugees have been granted visas through varying schemes, but just 21,600 have arrived. Pictured, Ukrainians at a train station wait to be evacuated from Kramatorsk, in eastern Ukraine, earlier this month 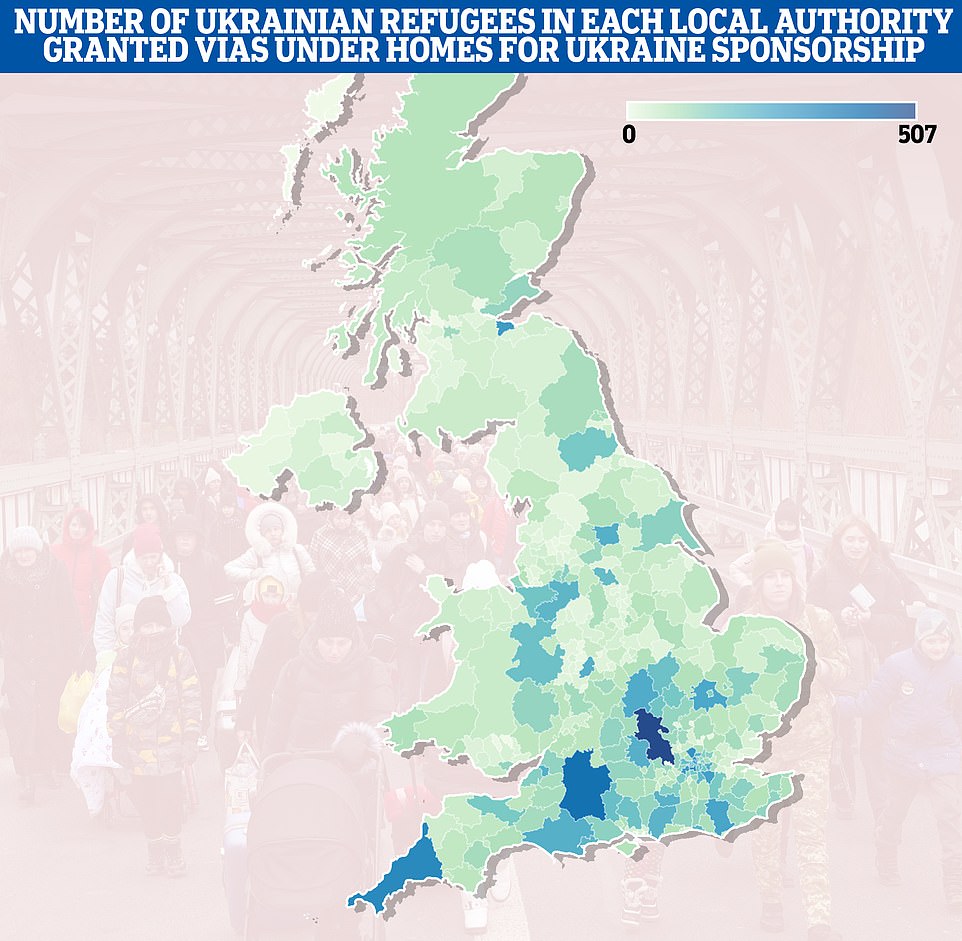 The figures are for lower tier local authorities in England, and show that 28,345 visas have been approved since the scheme was launched on March 14

Having issued 222 Homes for Ukraine visas, Chichester in West Sussex has the highest rate when its own population is taken into account, at 183 visas per 100,000 people, The Times reported.

In East Dean, a West Sussex village north of Chichester, a couple whose home is ‘used to being busy’ have welcomed a family of Ukrainian refugees.

Janet and John Holt now have three generations living in their three-bedroom house.

Svetlana Scomavska, 38, her six-year-old twins and her parents, arrived 10 days ago with help from Sanctuary in Chichester, a charity that is part of the wider City of Sanctuary movement.

Mrs Holt, who has six children and 10 grandchildren, told The Times that she loves having the Ukrainian family in her home.

‘My house is full again,’ she said. ‘There’s always someone cooking in the kitchen. We have delicious Ukrainian soup every lunchtime.’

Ms Scomavska and her family fled from industrial town Kamianske, near Dnipro, earlier this month.

Since arriving, her children have found their smiles again.

‘When we have this hard trip, it feel not good yourself,’ she told Sky News. ‘But now my children always happy, smiley and always play. Many smiles many scream, but John say its not bad, its good.’

Mrs Holt added: ‘This house is very used to being a busy, child-centred house, so we don’t mind a bit of screaming.’

‘I have daughters the same age [as Svetlana],’ Mrs Holt added. ‘I wonder how they’d cope. She’s been so tough.’

She told Sky News that welcoming the Scomavskas has been easier that other families experience, due to the help from others.

‘I think I cheated actually, because I haven’t filled in all the visa forms — that was done by Svetlana’s boyfriend Slav. Sanctuary did everything else.’

Mrs Holt explained how the Chichester charity’s business and volunteer coordinator, Katy De Lazslo, drove to Calais and ‘brought the family back in her car’.

‘I think we’ve actually got away lightly, because I gather it’s not an easy process,’ she added.

‘I hear this morning that some families are still not able to come because some of the visas have come through but not all — so the family can’t be separated and they’re still waiting for visas for children and for grandparents.

The Holts are the first family in their village to take in Ukrainian refugees, but there are more families en route.

‘I really want to meet more of my people,’ Ms Scomavska told the paper. ‘We hear that another family is arriving next week.’

Gillian Keegan, Conservative MP for Chichester, said that West Sussex has a ‘generous and open’ community. Her office has supported more than 130 people with their visa applications.