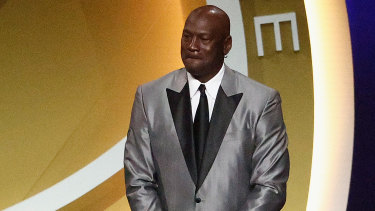 Michael Jordan on stage during the 2021 Basketball Hall of Fame Enshrinement Ceremony on May 15.Credit:Getty Images

The gift announced on Saturday (AEST) will help enrich its journalism and sports program that was originally launched with a donation from director and actor Spike Lee. The school, in a statement, said the donation would help fund scholarships, technology and educational programming for students in those fields.

“Morehouse is grateful to Michael Jordan and [Nike’s] Jordan brand [of products] for an investment in the education of talented men of colour who will ensure there is equity, balance, and truth in the way sports stories are framed and the way the Black experience is contextualised within American history,” said Monique Dozier, vice-president for institutional advancement at single-sex school. 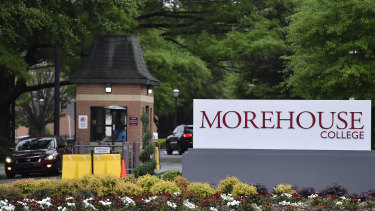 The entrance to the Morehouse College in Atlanta. Credit:AP

The donation is part of a larger philanthropic donation by Jordan and Nike called the Black Community Commitment, which has directed donations to the Smithsonian Institution’s National Museum of African American History and Culture and the Ida B. Wells Society, among other organisations.

“Education is crucial for understanding the black experience today,” Jordan said. “We want to help people understand the truth of our past and help tell the stories that will shape our future.”

The program, which has focused on the lack of black leadership in sports journalism and athletics, has produced more than 80 graduates who now work in media and sports.

Lee, a 1979 Morehouse graduate, said there would be a “rich legacy of storytellers who will be supported by these programs”.

“Many people are influenced to think a certain way about black folks based on what they see on television and in Hollywood. We’ve got to tell our story,” he said.