Join the little litter heroes: Youngsters lead the way as the Great British Spring Clean kicks off across the UK

This year’s Great British Spring Clean got off to a flying start yesterday as volunteers nationwide tackled the blight of rubbish.

An army of recruits answered the Daily Mail’s rallying cry to help make Britain beautiful again by cleaning up streets, parks, beaches and even mountains.

The Great British Spring Clean, backed by the Mail and organised by Keep Britain Tidy, runs until June 13.

A total of 151,244 people have answered our call, pledging to clean 957,872 miles of Britain – bringing the magic target of cleaning one million miles tantalisingly close. 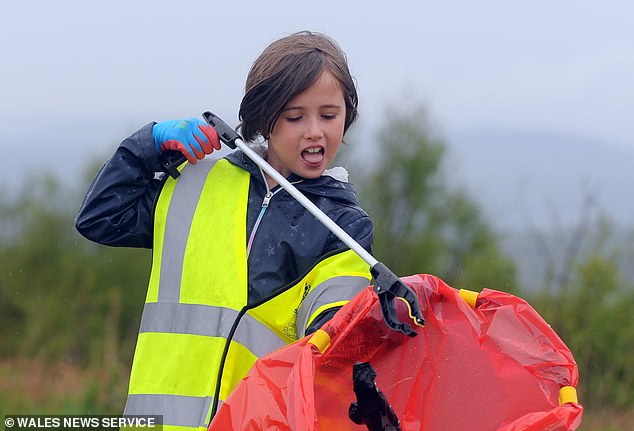 Environment minister Rebecca Pow was among those who took part in a local litter pick in her constituency of Taunton Deane, Somerset. She was joined by nine members of staff from KFC, which has partnered with Keep Britain Tidy.

Hailing the campaign and thanking the thousands joining in across the nation, she said: ‘The blight of litter on our environment has come into sharp focus over the past year.

‘As we all spend more time enjoying the great outdoors, many of us have seen our favourite walks, beauty spots and green spaces suffer from plastic bottles or food wrappers. That is why the Great British Spring Clean is so important to get our environment back on track.’

In Hove, pupils aged six to 11 from Deepdene Prep School went litter picking on the beach for an hour.

School head Tracey Hayward said: ‘On Friday afternoons the children have ‘golden time’ that they have earned through working hard in the week, and normally play games… but they volunteered to do an hour’s beach clean instead. They found lots of small bits of plastic and lots of rusty beer bottle lids and fishermen’s nets. They were concerned that these could hurt a dog on the beach or fish in the sea. I think it makes them more committed to not dropping rubbish themselves.’ 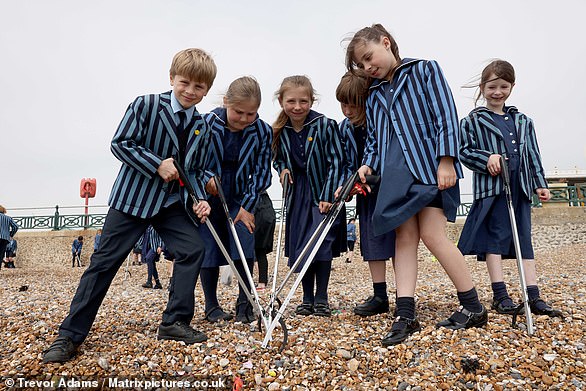 In Hove, pupils aged six to 11 from Deepdene Prep School went litter picking on the beach for an hour

Braving the elements to do their bit

Organiser Andrew King, of Keep Wales Tidy, said: ‘We picked up 20 bags of litter off the mountain and surrounding areas in an hour-and-a-half. One of the issues is that there is a snack bar in the car park. People buy drinks, go up the mountain for lovely views but leave their litter behind.

‘Before the pandemic, we organised weekly litter picks in Caerphilly but they have been cancelled until now because of Covid. This was our first event to coincide with the start of the Mail campaign and we have two more planned over the weekend.’

Gove got his hands dirty too

Michael Gove joined in the Great British Spring Clean in his Surrey Heath constituency yesterday – and joked that picking litter was a nice change from life in Westminster.

Their contents included lager cans, an empty champagne bottle, a car tyre, and a plastic manhole cover at a car park near Blackwater park in Camberley, Surrey.

Mr Gove said: ‘The Great British Spring Clean is a brilliant initiative. It’s now become part of the calendar, thanks to the Daily Mail and Keep Britain Tidy.

‘After the year we have had, people want to be outdoors enjoying nature. I’m always amazed by what gets thrown away. You find so much, it’s a sign of a thoughtless minority.’

He added: ‘It’s always nice to be away from Westminster. After a week like this, it’s nice to be out and about.’ 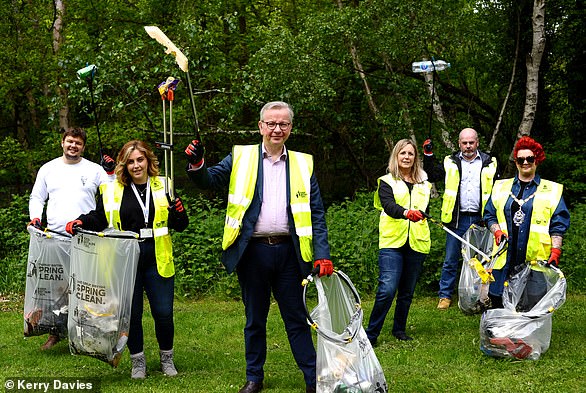 We’ve been applauded in the street

Pupils in the Eco Warriors club at Manchester Enterprise Academy in Wythenshawe have been litter-picking every Wednesday for four months, cleaning up in and around the school.

Aged between 11 and 14, they have pledged to clean up around 160 miles during the Great British Spring Clean.

Geography teacher Brittany Furness has organised the group and said one elderly couple had applauded the children for their good work, adding: ‘That really spurred the kids on!’

Miss Furness, 27, said the children have brought ‘community spirit’ to the school and find the clean-up ‘really rewarding’.

She added: ‘I think they see that they can make a difference.

‘I say to them all the time, they are the future and they can do whatever they want. They understand its importance and they can make a difference.’ 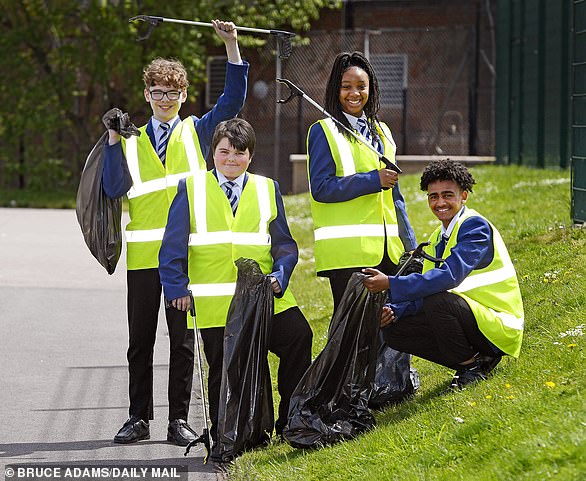 Pupils in the Eco Warriors club at Manchester Enterprise Academy in Wythenshawe have been litter-picking every Wednesday for four months, cleaning up in and around the school

While schoolchildren were busily picking litter yesterday, all age groups are expected to take part in the clean-up in their droves.

Over the weekend, groups in areas across the country – from Burwell, Cambridgeshire, to Tunbridge Wells, Kent, and Castlefield, Manchester – will be out and about as part of the immense effort.

While many volunteers will be joining organised events, lone litter pickers can also take part.

Anyone joining the Great British Spring Clean is urged to pledge how many hours they expect to devote to picking litter by entering the information on the Keep Britain Tidy website.

The charity’s chief executive Allison Ogden-Newton said: ‘The response of the great British public on the opening day of this year’s campaign has been overwhelming.

‘After an incredibly difficult year for everyone, the response to the Great British Spring Clean and the willingness of individuals, communities and businesses to join us on our million-mile mission shows that people have learned to value the environment on their doorstep, want to tackle the litter pollution that blights it – dropped by a thoughtless minority – and are ready and willing to take action.

‘We thank each and everyone of them for loving where they live.’

Among the more unusual items picked up yesterday was an 84-year-old beer bottle found in a Worcestershire churchyard.

It was discovered by a group of 90 pupils from Kidderminster’s Hartlebury Church of England Primary School.

The group’s organiser Karen Blanchfield said: ‘The children were very excited about today’s finds in the churchyard. There was a rusty bell, an old candle holder and a beer bottle from 1937.’