Washington: US Secretary of State Mike Pompeo has come into contact with someone who tested positive for the coronavirus and will be quarantining, although he has tested negative, the US State Department said.

"Secretary Pompeo has been identified as having come into contact with someone who tested positive for COVID. For reasons of privacy we can’t identify that individual," a spokesperson for the State Department said. 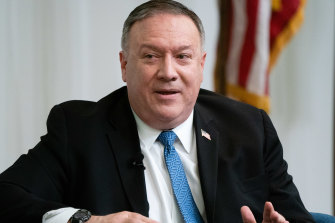 Mike Pompeo reportedly cancelled a speech he was due to deliver at an indoor holiday party.Credit:Bloomberg

"The secretary has been tested and is negative. In accordance with CDC guidelines, he will be in quarantine. He is being closely monitored by the department’s medical team."

The State Department did not immediately answer further queries about how Pompeo came into contact with the infected individual. The Washington Post on Tuesday reported that Pompeo cancelled a speech he was due to give at an indoor holiday party the State Department had organised.

Pompeo did not have any appointments or event in his public schedule sent out by the State Department late on Tuesday. President Donald Trump was due to hold a Cabinet meeting at 11.30am EST, according to the White House schedule.

The District of Columbia tightened up its guidelines for restaurants, businesses and gatherings as coronavirus cases across the United States as well as Washington have been back on the rise. The latest guideline on the district's web site says indoor gatherings may not exceed 10 people.

More than 72.66 million people have been reported to be infected by the novel coronavirus globally and 1,636,000​ have died, according to a Reuters tally.

In the United States, there have been around 16.7 million confirmed cases and more than 304,000 deaths.

Stay across the news you need to know related to the pandemic. Sent Monday and Thursday. Sign up here.