A high school pupil was slammed to the ground by a police officer and hit her head on the pavement in new shocking footage.

Questions have been raised about the level of force used by the school resource officer in the video, with the girl being slammed to the ground appearing to go limp after hitting her head.

The footage, shared on social media, was filmed yesterday at Liberty High School in Osceola, Florida.

In the video, the police officer pins the girls’ arms behind her back before forcing her to the ground. 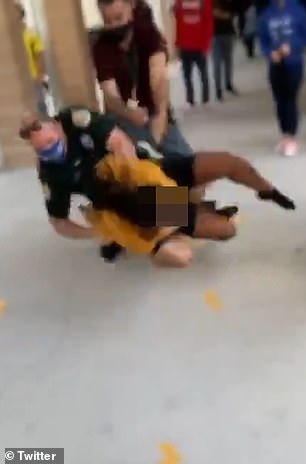 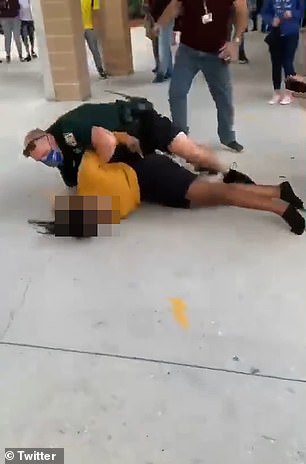 A police officer pins the arms of a Liberty High School student behind her back before using his body weight to slam her into the ground in in Osceola, Florida. A loud thud is heard as her head hits the concrete

A loud bang is heard when the girl’s head hits the concrete floor, with the officer keeping the student in place using his entire body weight.

Despite the girl not visibly moving, the officer keeps her arms pinned behind her back and places her in handcuffs.

It is unknown what led up to the officer’s involvement or the current condition of the girl.

The student who posted the video on Twitter said: ‘This girl was already separated and under control by one of the faculty members when the officer came out of nowhere picked her up and bodyslammed her head first on to the concrete.’

Following the incident at the high school, the Osceola County sheriff’s office released a statement which said: ‘Today the sheriff’s office received information from school officials at Liberty High School about a video posted on social media depicting one of our School Resource Officers in a confrontation with a student.

‘The incident appeared to take place between classes in the hallway. In the video, it shows the deputy taking the student to the ground and placing handcuffs on her.

‘Our office is in the initial stages of our investigation. We are collecting video, witness statements, and relevant information related to the incident.

‘We know that the School Resource Officer was in the process of trying to stop the student from fighting another student in the hallway when the deputy took her into custody.’

The sheriff’s office also confirmed that more information will be released when it has been made available.

After the video was shared on Twitter yesterday, people quickly responded by questioning whether the level of force displayed by the police officer was necessary, with one person saying they will never forget the sound of the girl’s head hitting the ground

People responding to the video on Twitter were shocked by the brutality the officer showed in the way he handled the student.

One person said: ‘I am never going to get that sound of her head hitting the ground outta my head. I hope she’s ok.’

Another responded to the video and said: ‘What kind of man does it take to do that to a girl? He is a cop, she is a child. This is disgusting.’

A third pointed out that the officers appeared to already have control of the girl in the video. They said: ‘She didn’t need to be smashed into the concrete! I feel ill, I have a daughter.’

While another questioned whether it was necessary to have slammed the student into the ground at all.