Milwaukee: The second night of the Democratic National Convention lacked the fireworks of Michelle Obama's speech on night one. But it was a deftly-executed broadcast that served an important purpose: highlighting Joe Biden's strengths as a nominee rather than simply positioning the Democrats as a party that opposes everything Donald Trump stands for. 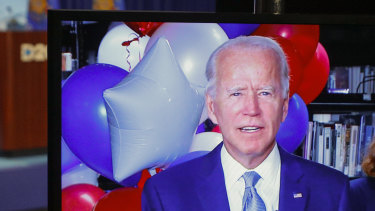 The Democratic National Convention has emphasised Joe Biden’s empathy and ability to recover from tragedy.Credit:Reuters

One of the most effective segments on the opening night was a video documentary recounting Biden's many years travelling back-and-forth on the Amtrak train between his home in Delaware and Washington D.C to spend time with his young sons. The video showed Amtrak employees saying how Biden took an unusual interest in their lives and those of their family members.

The Democrats leaned into this theme further on Tuesday night (Wednesday AEST) in a bid to contrast Biden's empathetic style with Trump's braggadocio. It's an important tactic: although Biden is well-known from his decades in the Senate and as Barack Obama's vice-president, he is still hazily-defined for many voters.

It was a clever move for the Biden campaign to select a New York Times security guard named Jacquelyn as the first person to enter his name for the party's nomination. It was another reminder of his ability to connect with ordinary people.

Jill Biden finished the night with a moving speech about her husband, recounting how they fell in love after the death of his first wife and young daughter in a car crash in 1972. She also told how Biden returned to work as vice president four days after the funeral of his son Beau, who died of brain cancer in 2015.

She said that her husband's experience recovering from personal tragedy would help him lead the nation through the pandemic and the mass unemployment it has caused.

"How do you make a broken family whole?" Jill Biden asked. "The same way you make a nation whole. With love and understanding, and with small acts of kindness. With bravery. With unwavering faith."

Barack Obama, who will deliver the headline speech on night three, has an important role to play in explaining how Biden helped improve his administration during their time together.

The Trump campaign is working overtime to portray Biden as a semi-senile puppet of the radical left. The Democrats have shown that Biden is likable; now they need to demonstrate that he has the policies and judgment to be an effective president.