With Hurricane Michael cooling off as a tropical storm off the coast of New York, the true extent it the damage it caused to Florida’s Panhandle has become plain.

Entire communities including Mexico Beach and Panama City have been ravaged by the storm which hit on Wednesday, bringing 155mph winds to the area.

With the storm now clear of the area, authorities are working to recover any bodies from the wreckage that they could not get to when the storm was raging.

They, along with energy companies desperate to reconnect the 1million plus customers who have lost power, have taken to the skies in helicopters to survey the extent of the devastation and the results are sobering.

Thirteen people are confirmed dead as a result of the storm but officials fear that number may rise. 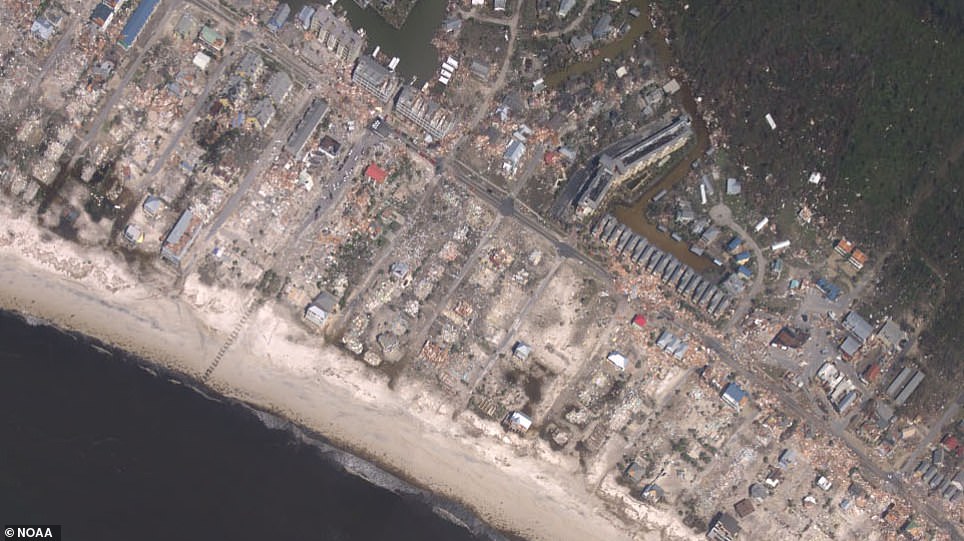 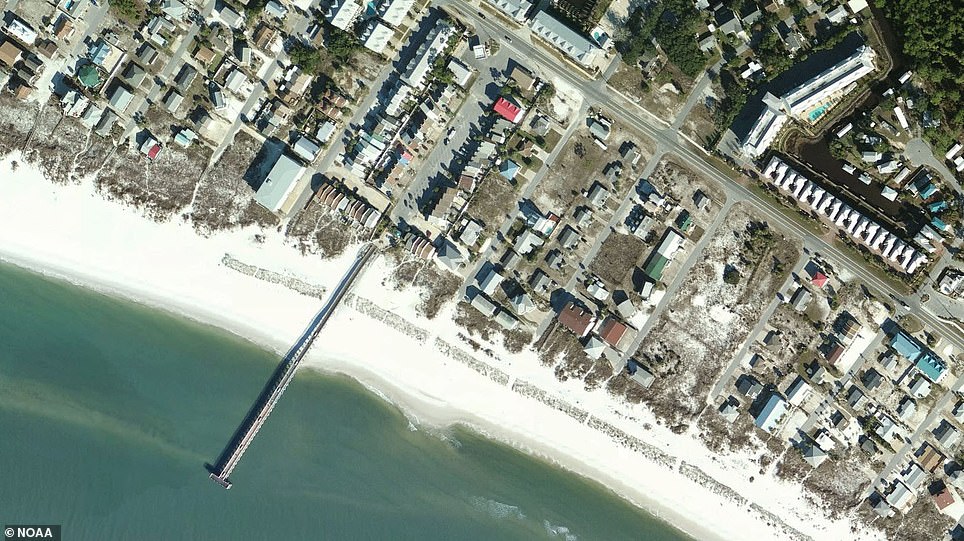 Harrowing before and after photographs show the extent of the damage on Mexico Beach. The area is shown, left, on Thursday after Michael hit and right, beforehand. An entire pier was torn from the ground by the storm and homes were completely wiped out 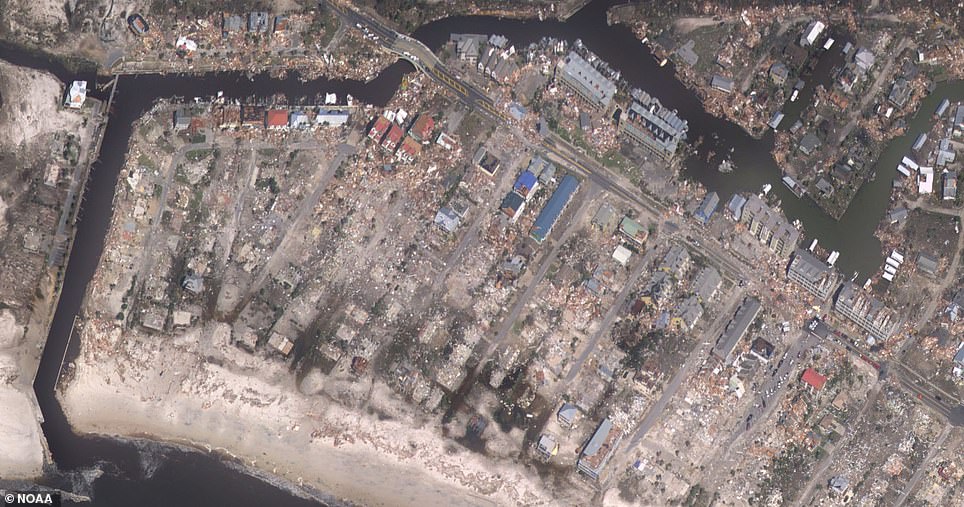 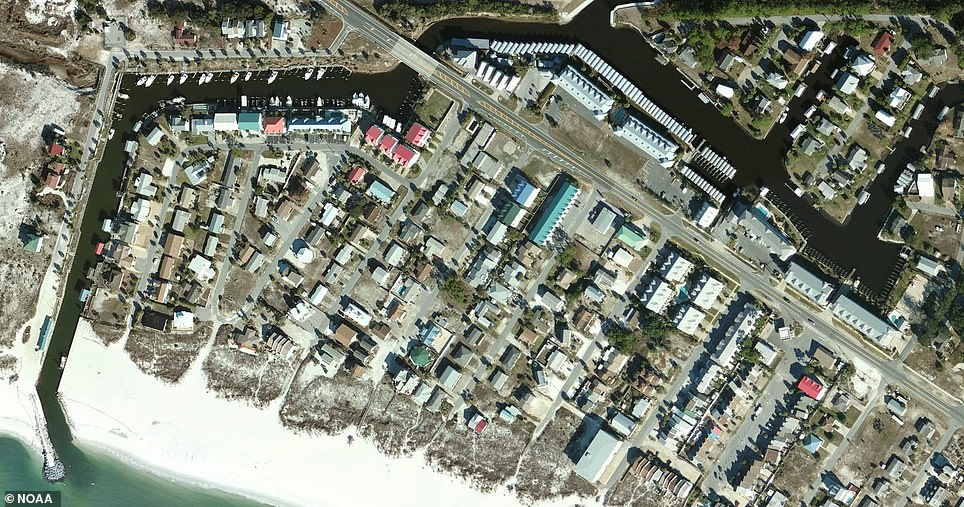 Mexico Beach’s homes were utterly destroyed. Emergency rescuers were still unable to get to the town on Thursday because the roads were impassable. They are now in the process or working through the damage to try to find anyone who is alive or dead 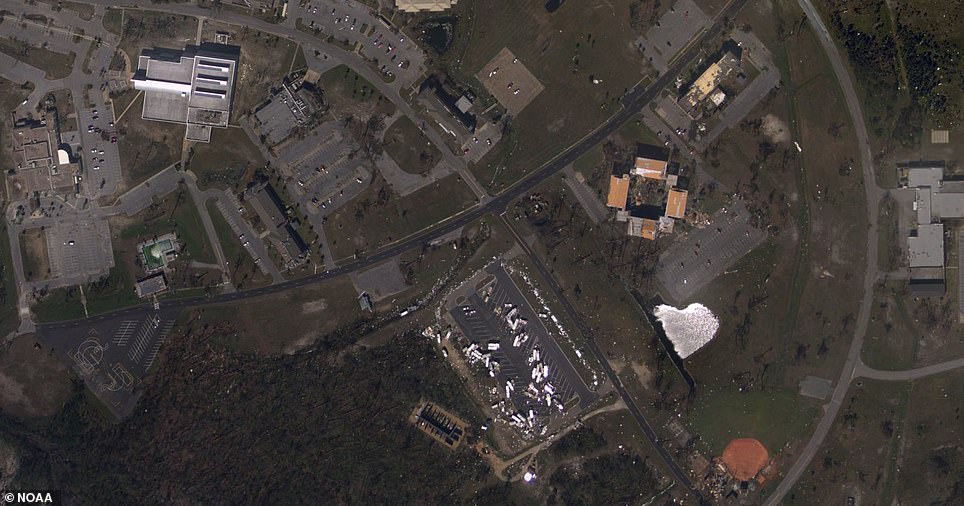 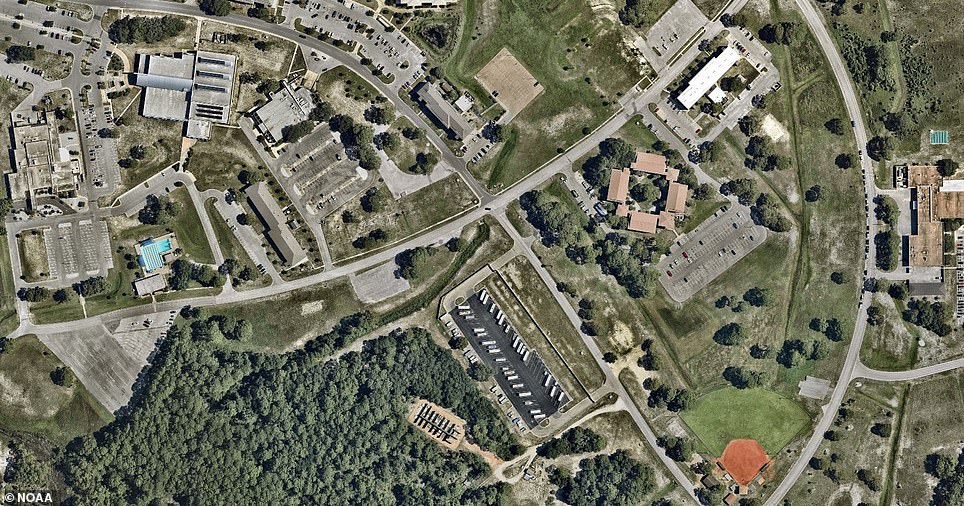 Many roads in the region are impassable because of debris which was blown over the region by the monstrous winds. The Panhandle was hit worse by winds than it was by storm surge which is plaguing parts of Georgia and Virginia 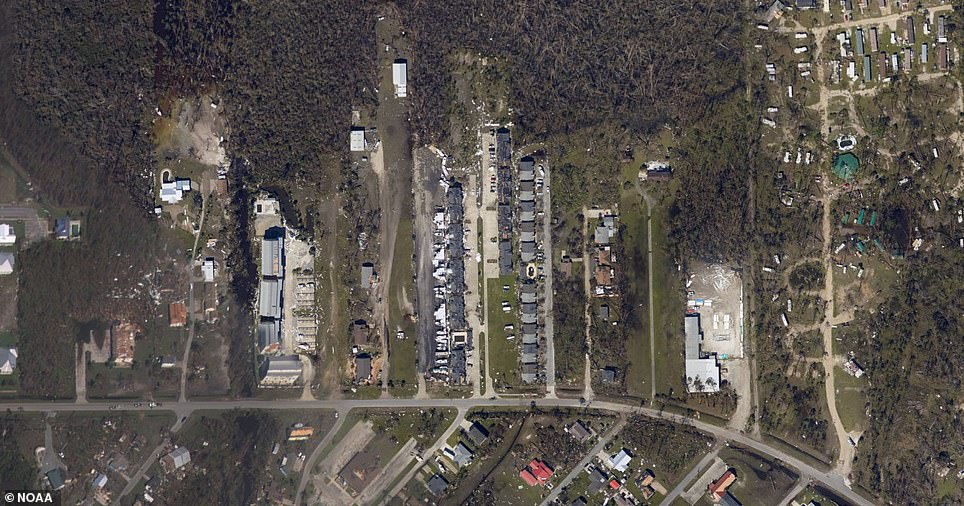 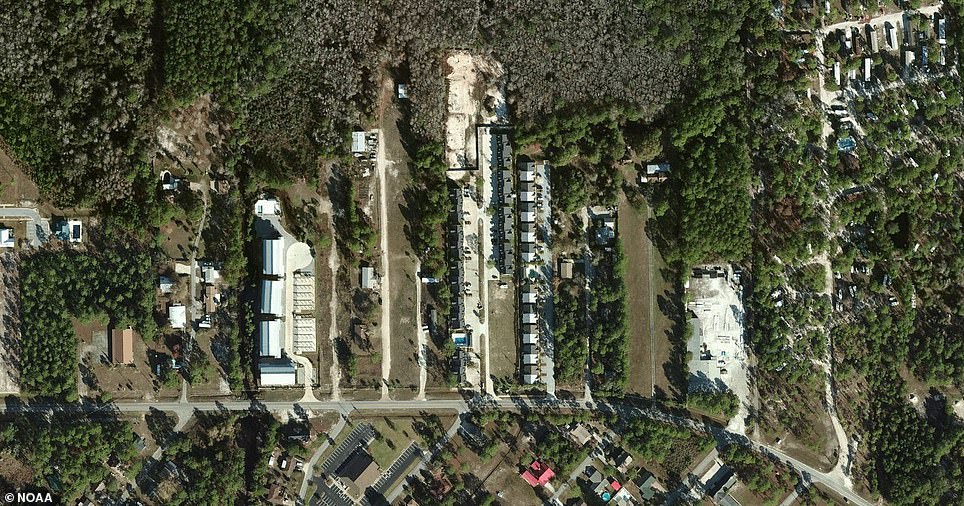 More of the devastation in Mexico Beach is shown above in images taken left, after the hurricane, and right, before. Of the 1,200 people who live there, around 280 stayed. Many are unaccounted for 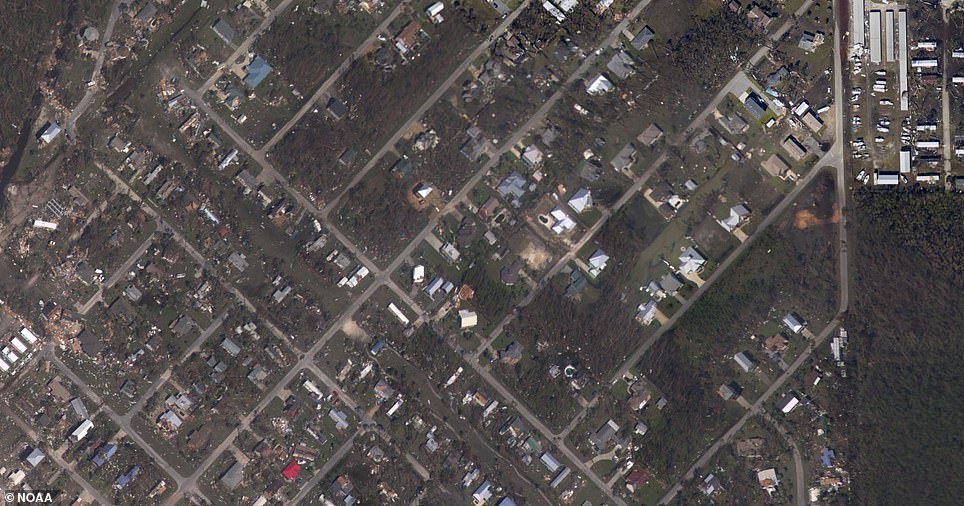 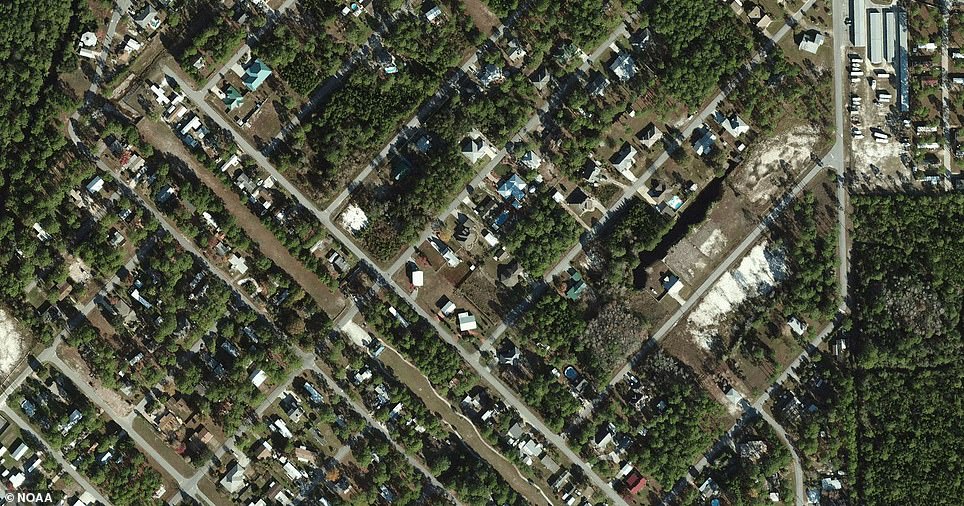 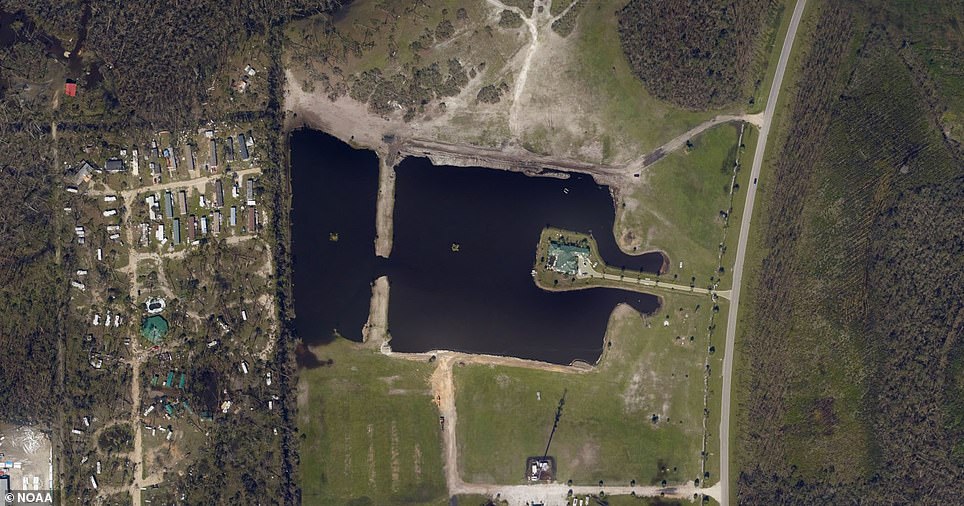 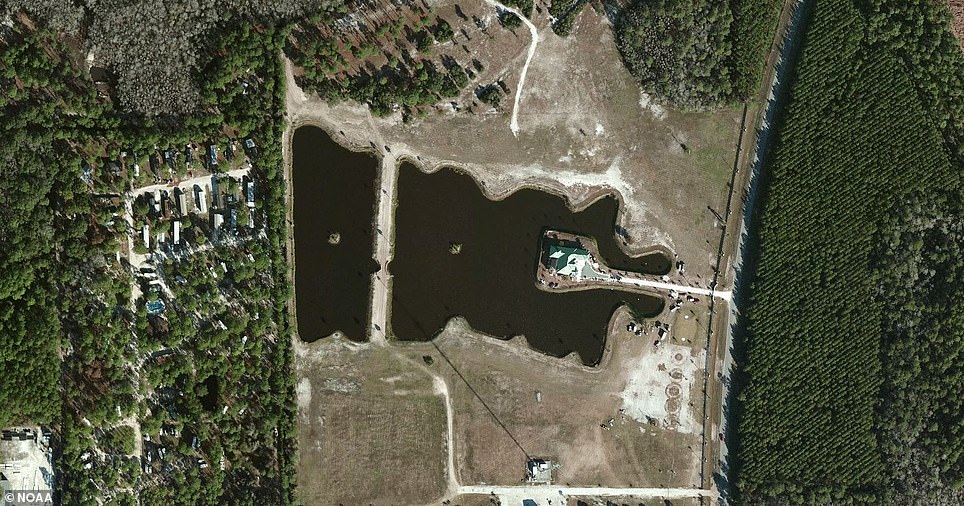 The aftermath of the storm is shown left, on Thursday. The same area, including a home which sits in the middle of a lake, is shown right, before the hurricane. Around 20,000 people are in shelters across the region because their homes have been destroyed 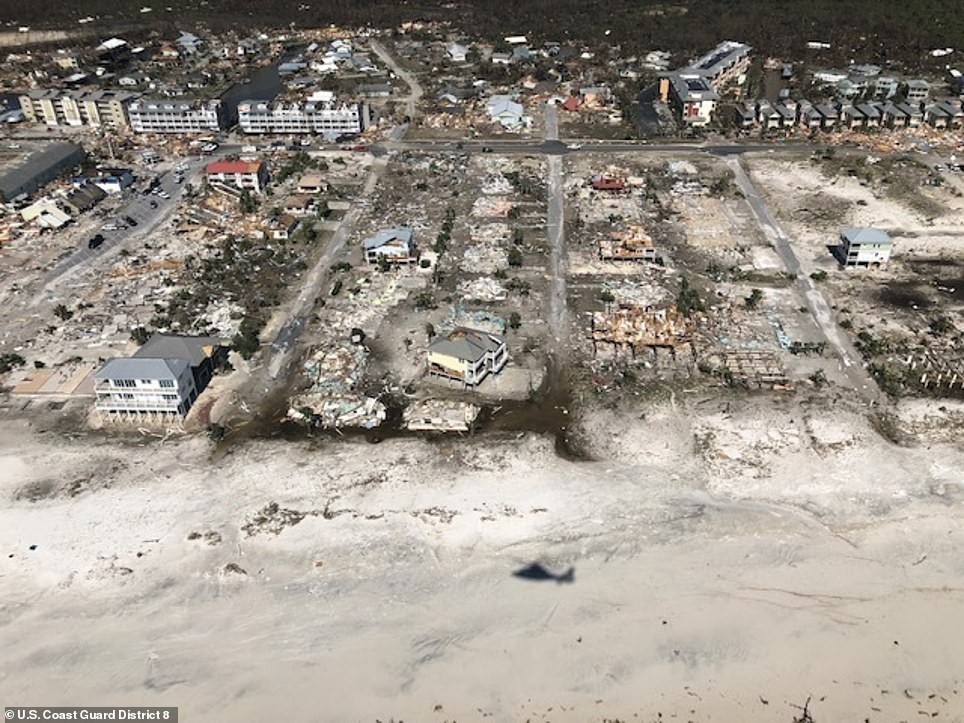 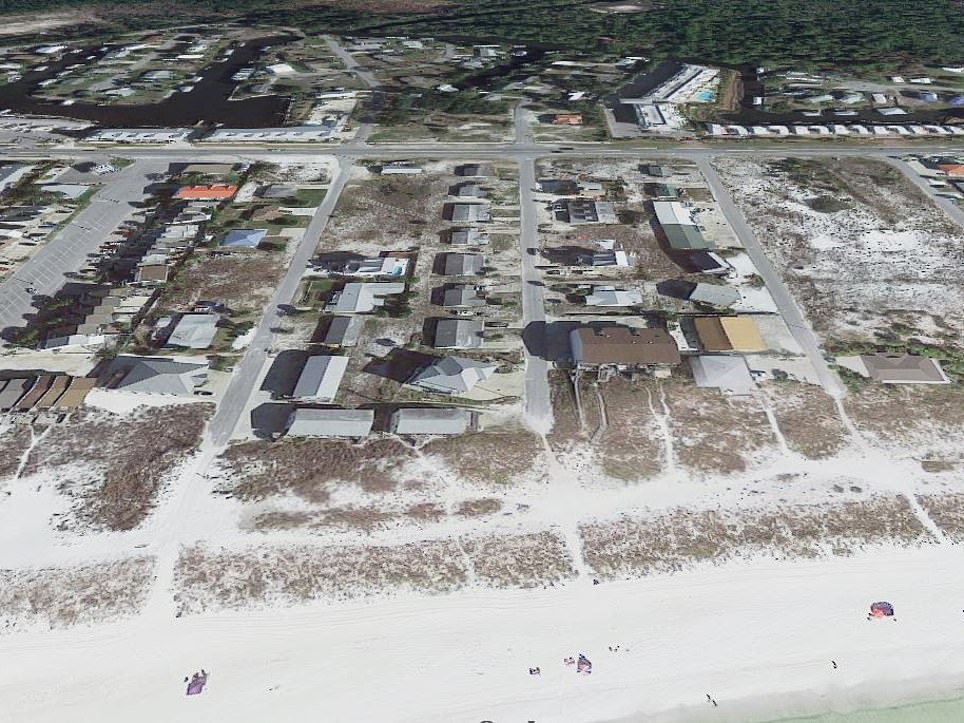 This is the Coast Guard MH-65 Dolphin Aircrew’s view of Mexico Beach on Thursday, after Hurricane Michael passed through the region (left) and (right), an aerial view of the same stretch of beach before the devastating storm 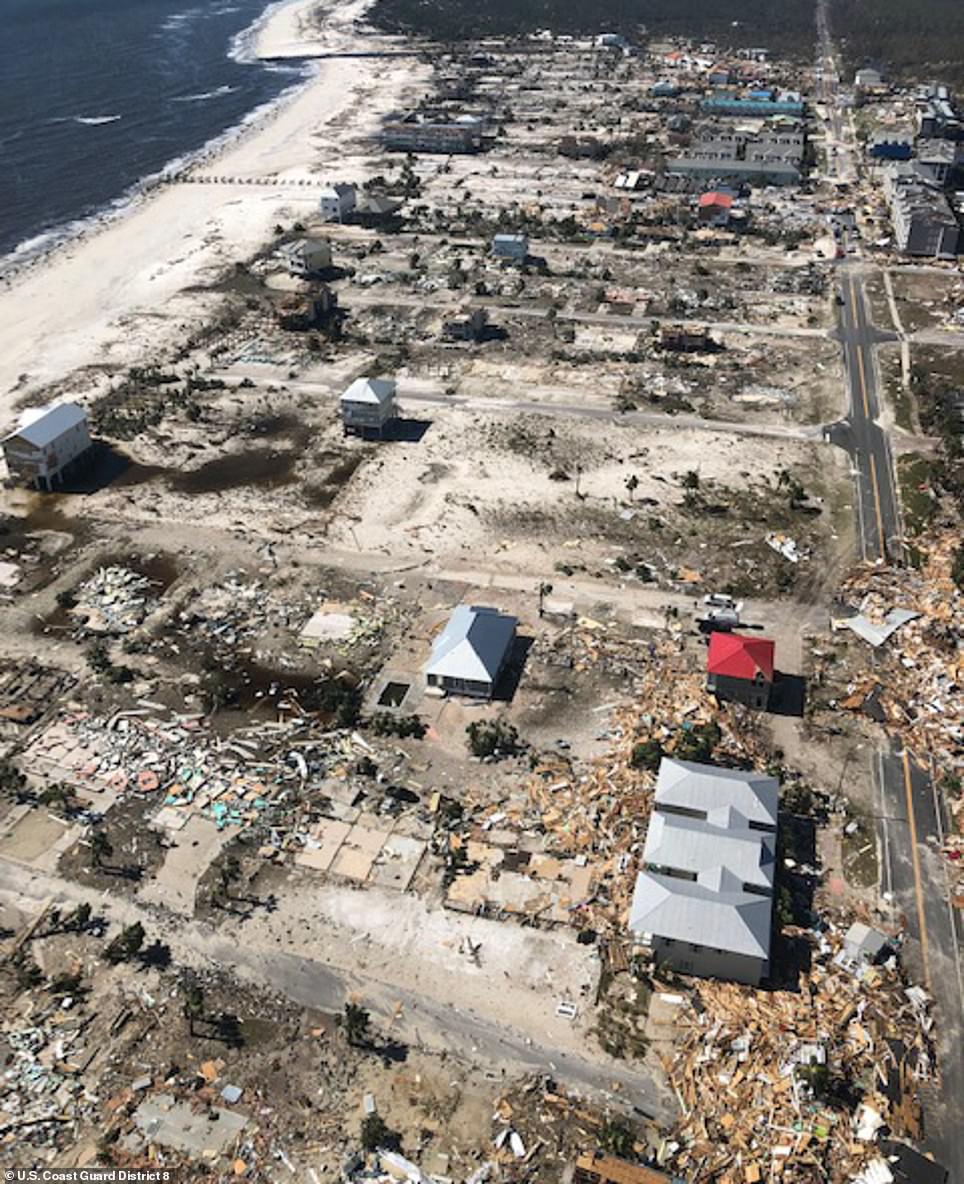 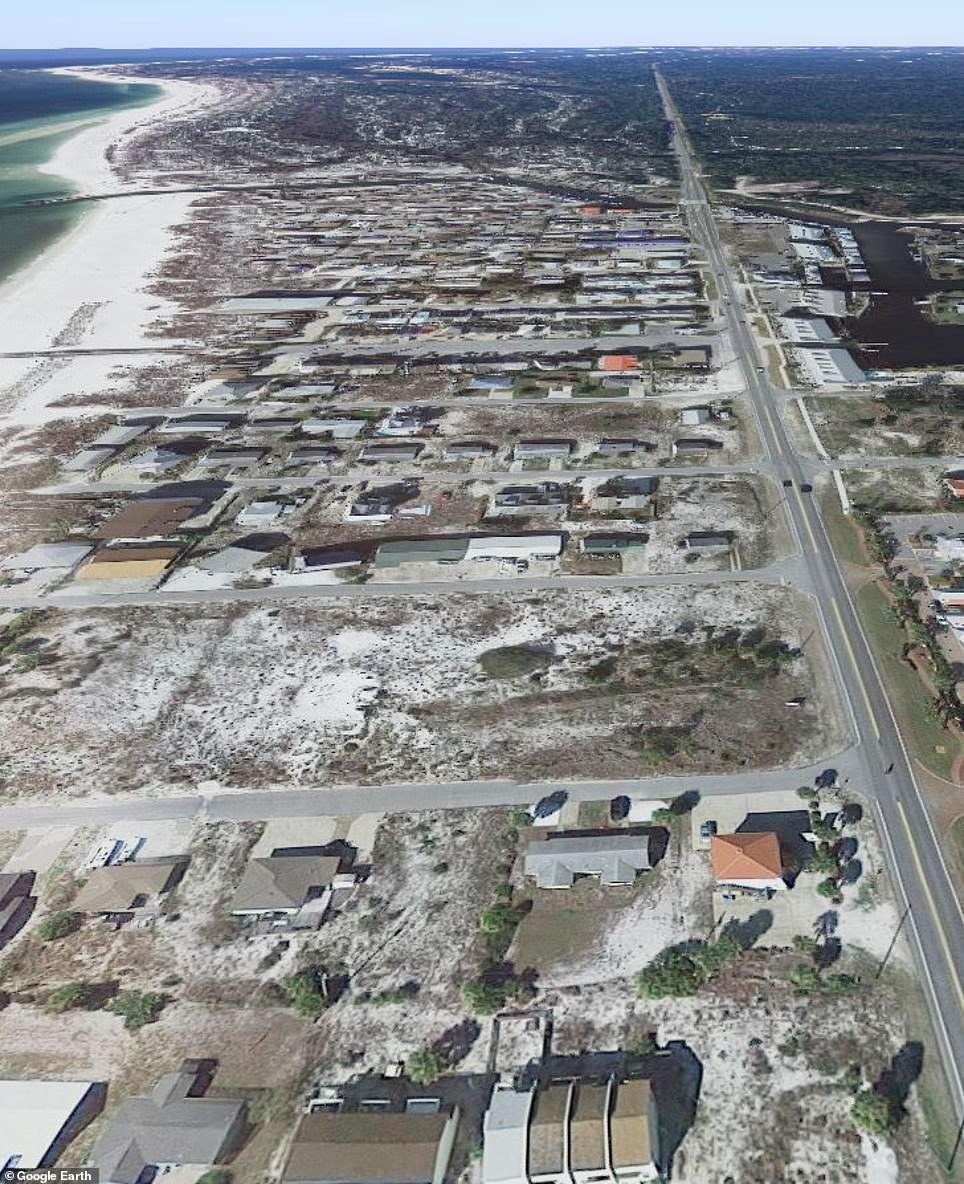 A stretch of beach in Mexico Beach that was obliterated by Hurricane Michael on Wednesday is shown, left, on Thursday and right, before the storm. Mexico Beach was one of the worst hit 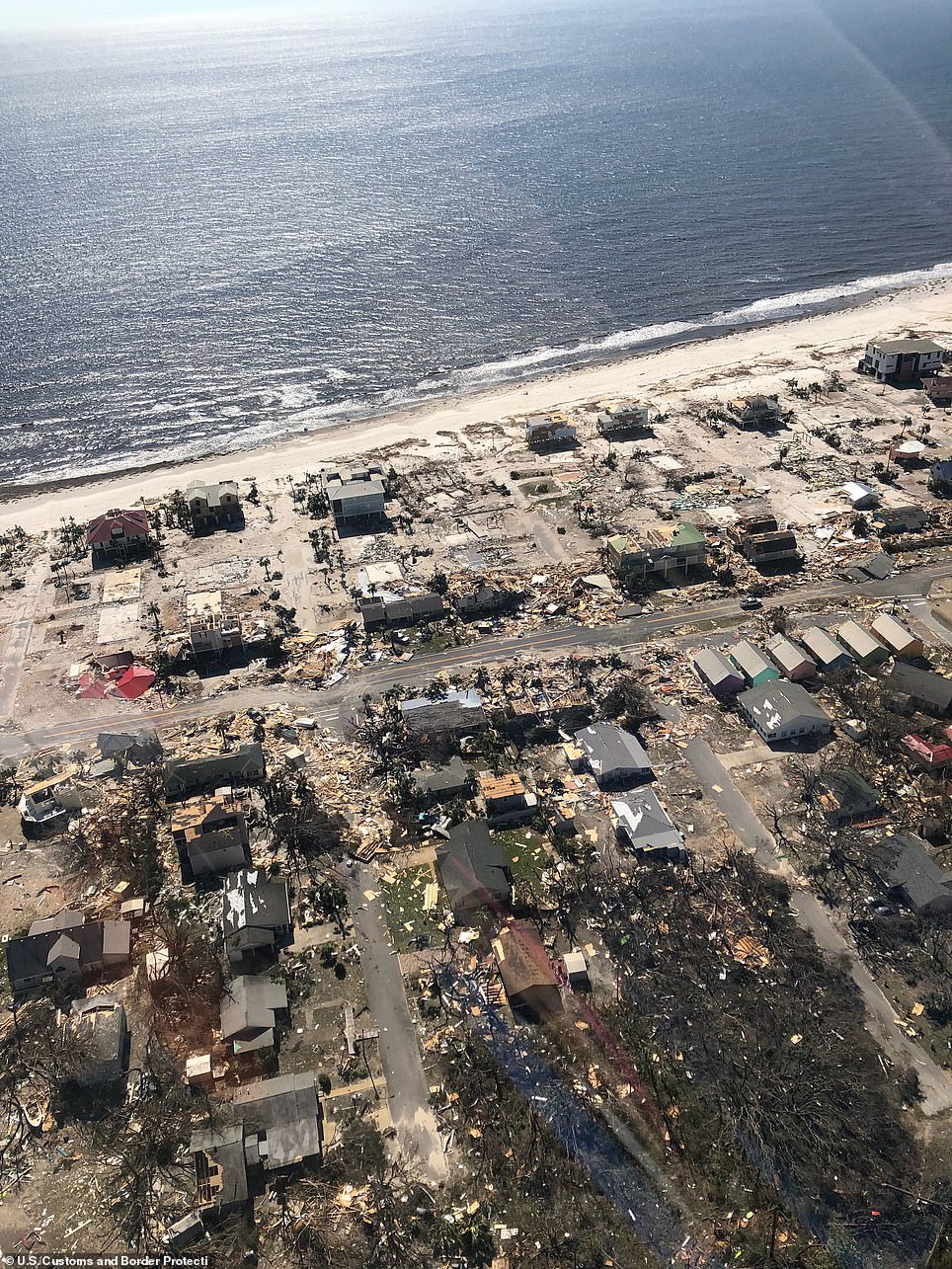 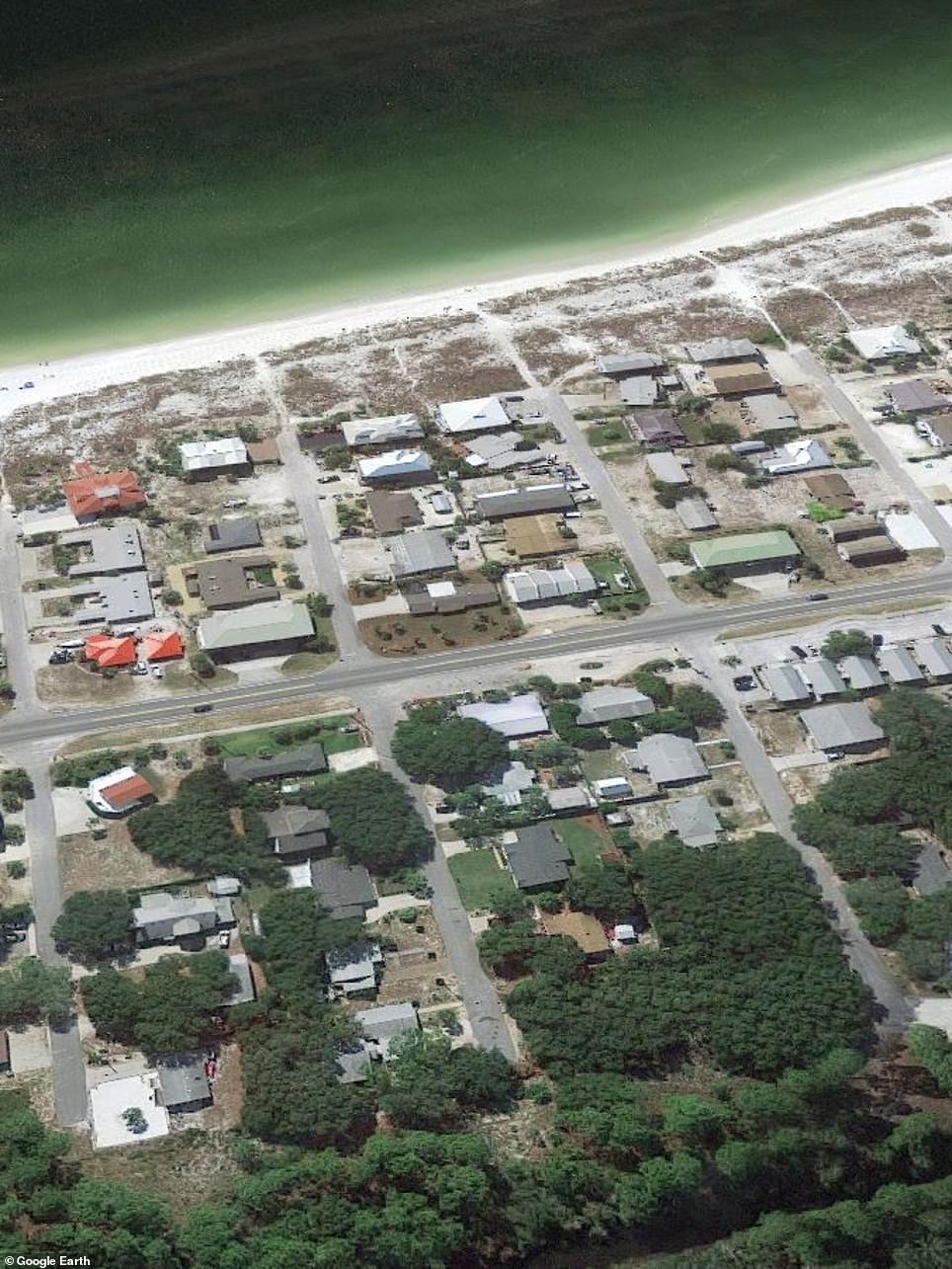 The entire beach community of homes in Mexico Beach was obliterated by the storm. The city took the brunt of Michael, feeling the full force of its 155mph winds on Wednesday afternoon 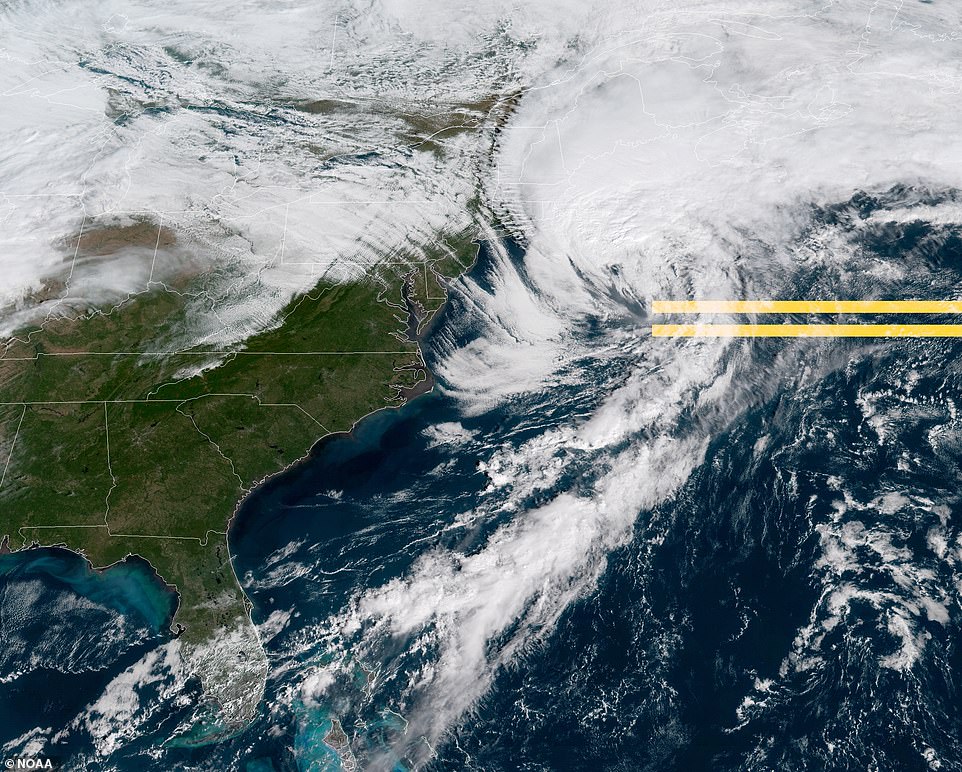 Michael has now moved away from Florida and the south and is lingering off the coast of New York. It has been downgraded to a tropical storm but is expected to move away, further across the Atlantic, by Friday night

As camera crews flew over it on Friday including one belonging to CNN, stunned reporters remarked: ‘It’s gone. It’s gone.’

Residents in other areas described the terrifying conditions as the storm hit on Wednesday including in Georgia where they likened the noise of the looming hurricane to a ‘train coming’.

On Friday, Virginia’s Department of Emergency Management said five lives been claimed in the state. They include four people who were swept away by flood water and a fire fighter who died in a highway crash.

Sarah Radney, an 11-year-old, was visiting her grandparents’ home when Hurricane Michael roared into southwest Georgia.

She and her siblings were there on a fall break. Her parents decided cautiously to let them stay as Michael approached because they thought the home was powerful enough to withstand the storm.

If the family feared anything, it was probably falling trees – not a carport next to the house.

In what could only be described as a freak accident, authorities say Michael’s powerful winds lifted the portable structure high into the air and slammed it back down on the house. 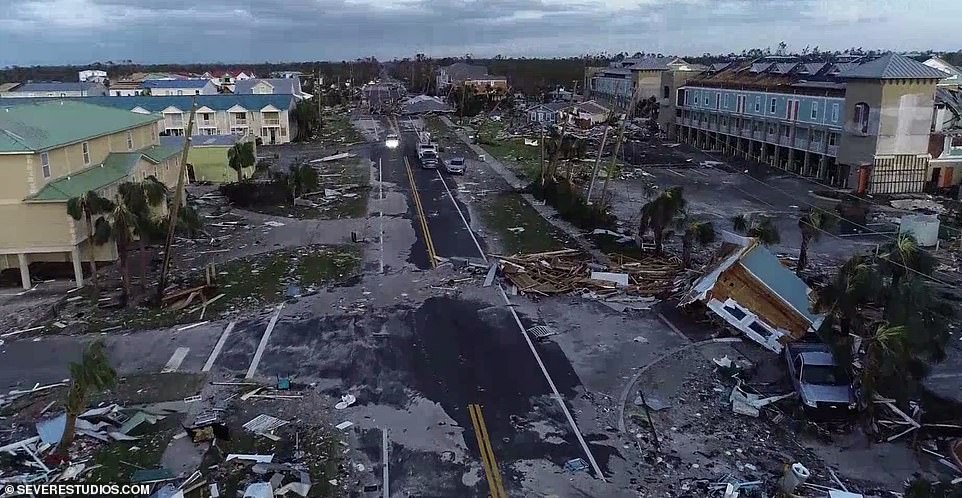 The storm caused ‘catastrophic damage’ at the Tyndall Air Force, which sits on the shoreline between Panama City and Mexico Beach (pictured), a small community which was almost completely destroyed 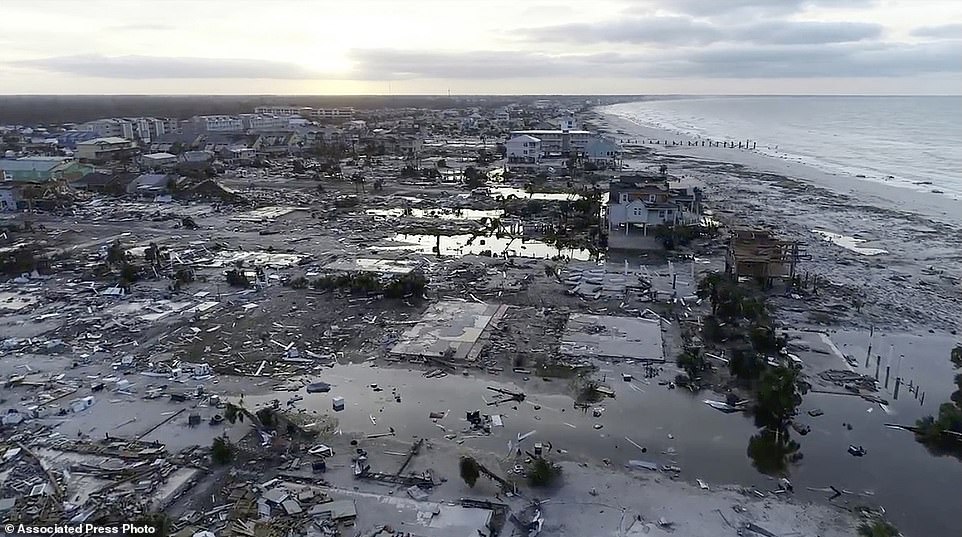 When it landed, one of the legs tore through the roof, fatally striking Sarah in the head. It also hit her grandmother, puncturing her in the lung and breaking her rib.

Sarah’s father and stepmother, Roy and Amber Radney, said Thursday that Sarah loved being around her big family and made everything more fun.

Her grief-stricken father told The New York Times before she died that it was ‘just hell’.

‘Last night was just hell. I’m an hour and a quarter away, and my daughter’s dying, and I can’t do anything about it. I can’t think of anything that is more related to hell than that,’ he said.

He urged others to heed warnings when they are told to leave their houses.

‘I want people to know, man, when they say, “Get out of your house” — leave your house, listen to them. When they say, “No first responder is going to be able to get to you” — they’re not joking.’

Five people were killed in Florida after the storm devastated the state’s Panhandle.

They include Steve Sweet, a 44-year-old who died in his wife’s lap after an oak tree came crashing down on their home, crushing them both.

His wife Gayle was able to call her father and brother who came to the house and pulled her out from beneath the tree. They could not save Steve.