‘He was a beacon of hope’: Newspapers from around the globe pay tribute to Captain Sir Tom Moore after his death from coronavirus

Newspapers from around the world have paid tribute to Captain Sir Tom Moore tonight after the British hero’s death from coronavirus.

The war hero, who raised £33 million for the NHS by walking laps of his garden during the first national lockdown, passed away peacefully in Bedford Hospital on Tuesday afternoon.

The Queen led tributes in the UK and foreign newspapers have also now honoured the 100-year-old whose unrelenting optimism and belief that ‘tomorrow will be a good day’ endeared him to fans around the world.

The Sydney Morning Herald described him as a ‘beacon of hope’, a label also used by the New York Times who went on to describe him as a ‘hero’ and ‘inspiration’.

Germany’s Bild highlighted how the Queen mourned the captain’s death and labelled him as a ‘British Corona hero’.

In France, several papers labelled him as the ‘hero of the confinement’.

His passing was also covered by newspapers in Spain, Portugal and India. 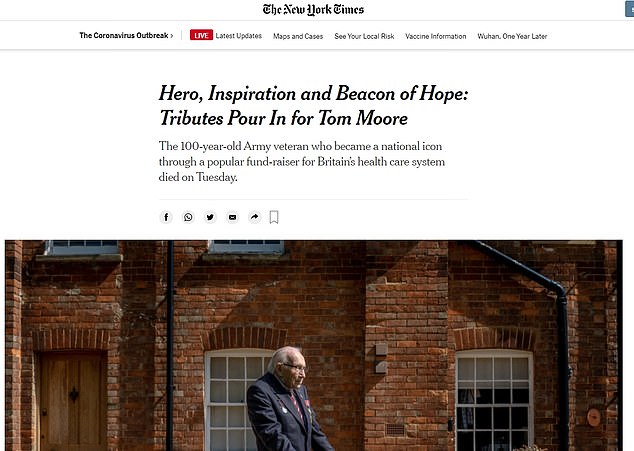 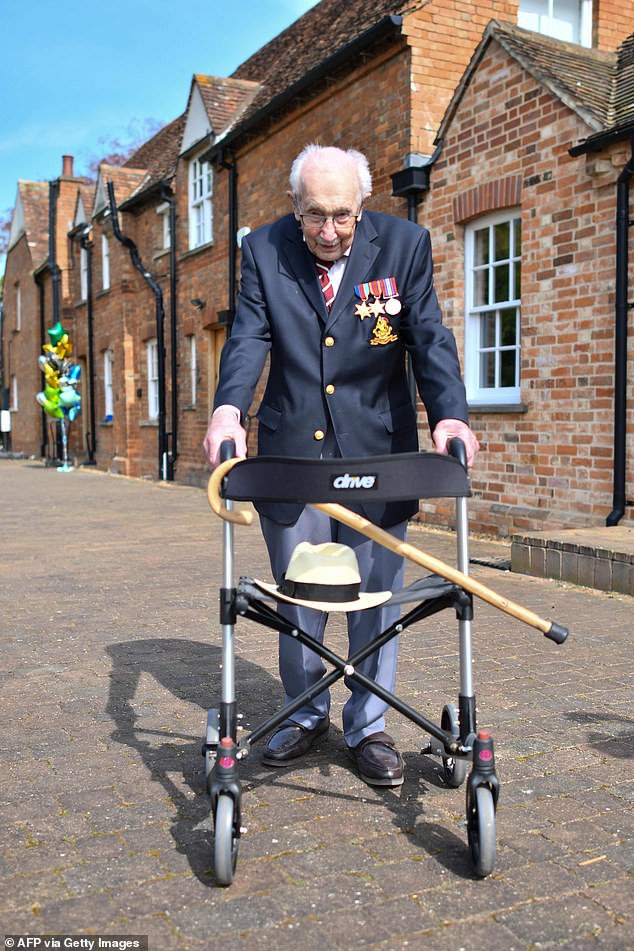 The war hero, who raised £33 million for the NHS by walking laps of his garden during the first national lockdown, passed away peacefully in Bedford Hospital on Tuesday afternoon 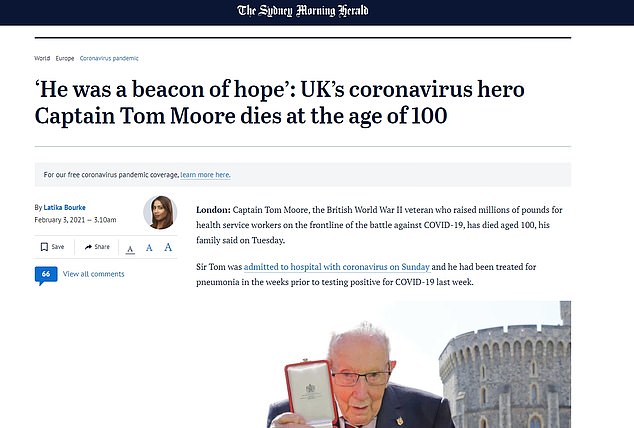 Tributes for Captain Tom have stretched across the Atlantic to the US, as the White House tweeted tonight: ‘We join the United Kingdom and the world in honoring the memory of Captain Sir Tom Moore, who inspired millions through his life and his actions.’

His daughters Hannah Ingram-Moore and Lucy Teixeira hailed the last year of his life as ‘nothing short of remarkable’, and said: ‘He was rejuvenated and experienced things he’d only ever dreamed of.’

Her Majesty this evening sent a message to Captain Tom’s grieving relatives and told of her joy at meeting him in person when he was knighted in July.

A statement from Buckingham Palace said: ‘The Queen is sending a private message of condolence to the family of Captain Sir Tom Moore.

‘Her Majesty very much enjoyed meeting Captain Sir Tom and his family at Windsor last year. Her thoughts and those of the Royal Family are with them.’

A tribute to Captain Tom was emblazoned on the screens at Piccadilly Circus, while the London Eye, Wembley Stadium, and Blackpool Tower were all lit up in his honour. 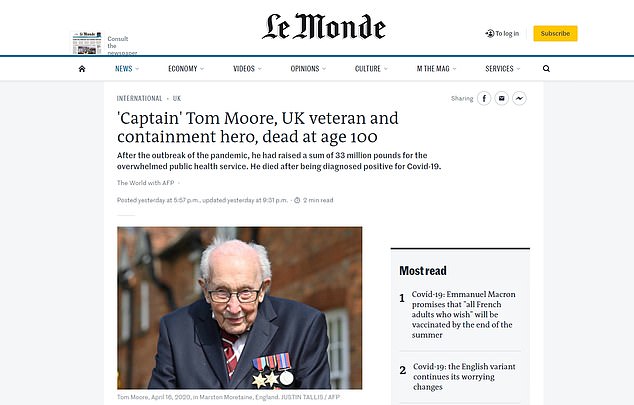 Le Monde, in France, described him as the hero of the containment, a sentiment repeated in several French papers 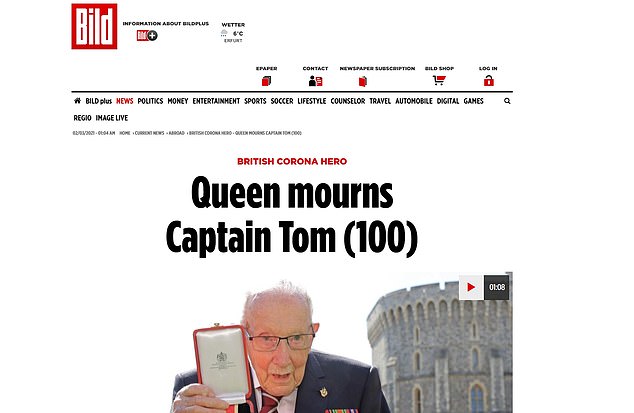 Downing Street lowered its flags to half-mast as Boris Johnson hailed the national hero as a ‘beacon of hope in the world’.

Captain Tom’s daughters had announced the sad news that their father had passed away just after 4pm.

They said: ‘It is with great sadness that we announce the death of our dear father, Captain Sir Tom Moore.

‘We are so grateful that we were with him during the last hours of his life; Hannah, Benjie and Georgia by his bedside and Lucy on FaceTime. We spent hours chatting to him, reminiscing about our childhood and our wonderful mother. We shared laughter and tears together.

‘The last year of our father’s life was nothing short of remarkable. He was rejuvenated and experienced things he’d only ever dreamed of.

‘Whilst he’d been in so many hearts for just a short time, he was an incredible father and grandfather, and he will stay alive in our hearts forever. 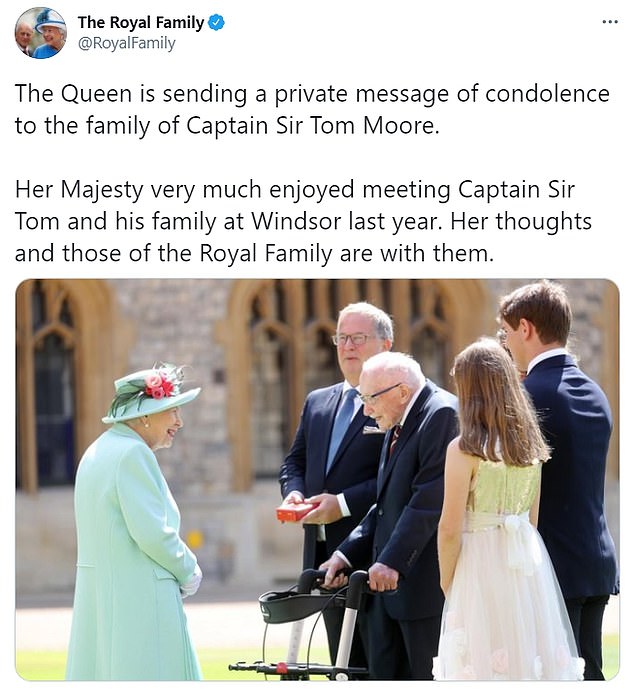 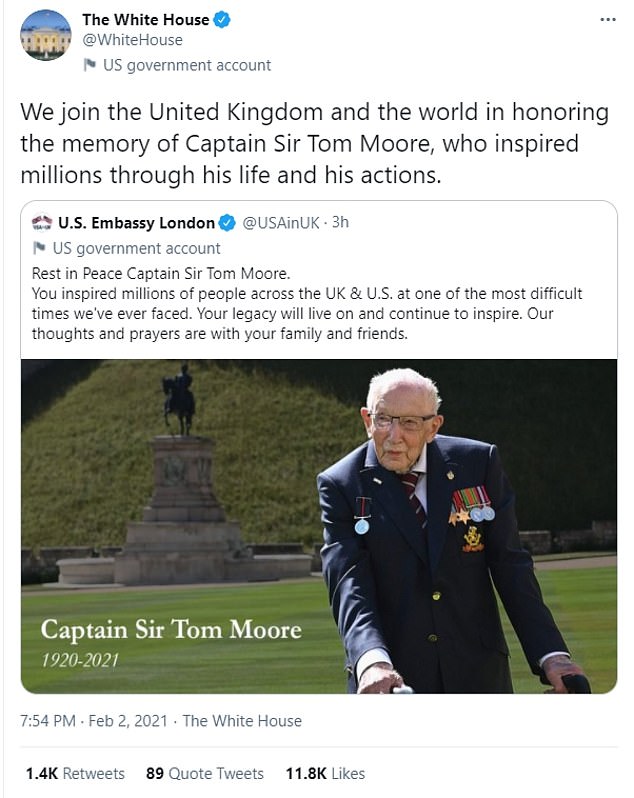 ‘The care our father received from the NHS and carers over the last few weeks and years of his life has been extraordinary. They have been unfalteringly professional, kind and compassionate and have given us many more years with him than we ever would have imagined.

‘Over the past few days our father spoke a great deal about the last 12 months and how proud he felt at being able to leave behind the growing legacy of his Foundation.

‘We politely ask for privacy at this time so we can grieve quietly as a family and remember the wonderful 100 years our father had. Thank you.’

On Sunday Ms Ingram-Moore had revealed he had been battling pneumonia over the ‘past few weeks’ before also testing positive for Covid-19 a week ago.

The former serviceman was then taken to Bedford Hospital in Bedfordshire on Sunday night after requiring ‘help with his breathing’, but was not put into intensive care.

Captain Tom had not been able to have the coronavirus vaccine because of the pneumonia.