BREAKING NEWS: Emotionless Parkland shooter Nikolas Cruz is sentenced to life in prison without parole as disgusted parents weep and beg that he’s murdered behind bars

Parkland shooter Nikolas Cruz has been sentenced to life in prison without parole after being spared the death penalty by three merciful jurors last month.

Cruz, 24, was emotionless in court on Wednesday as the parents and siblings of his victims wept all around him.

Many of those parents spoke today to blast the defense team who defended Cruz for their ‘offensive’ behavior in court and to beg the judge to put Cruz in general population.  Some called for other inmates to ‘exercise the judgement that the court can’t’ and kill Cruz in custody.

Judge Elizabeth Scherer thanked the parents for being ‘strong and patient’ throughout the sentencing phase of the trial before handing down the term.

She was powerless under the law and could only impose a maximum term of life in prison.

Scherer froze Cruz’s commissary until restitution is paid, meaning he cannot benefit from any money donated to his prison account.

Cruz had been facing execution, which the victims families wanted, but a lone, hold-out juror decided against it.

They persuaded two others jurors to vote against executing him – a decision that horrified the families, many of whom had been told not to show their emotions throughout the trial.

On Wednesday, some of told of their hope that Cruz will be murdered in jail. 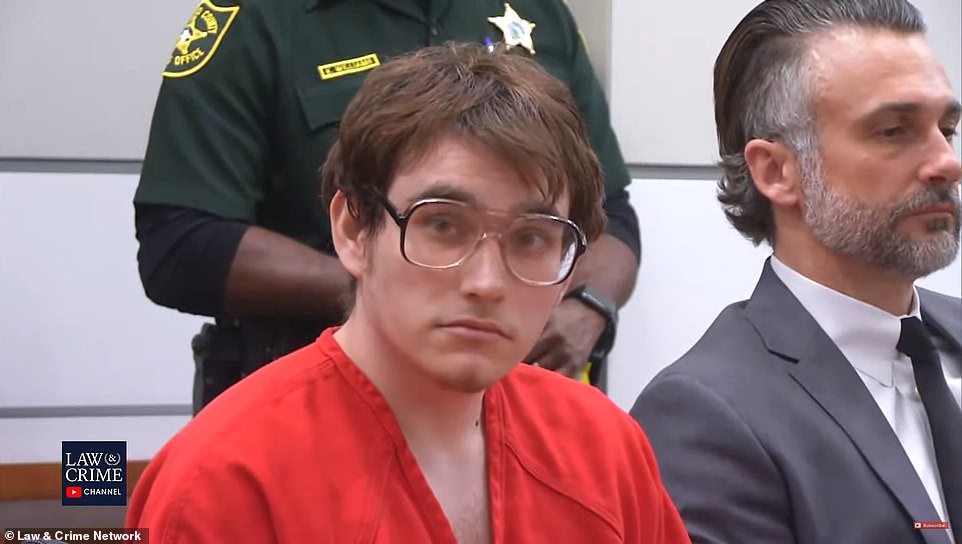 Nikolas Cruz, 24, was emotionless in court on Wednesday as the parents and siblings of his victims wept all around him 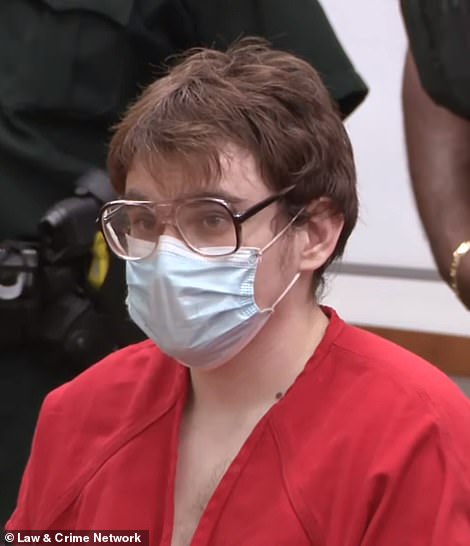 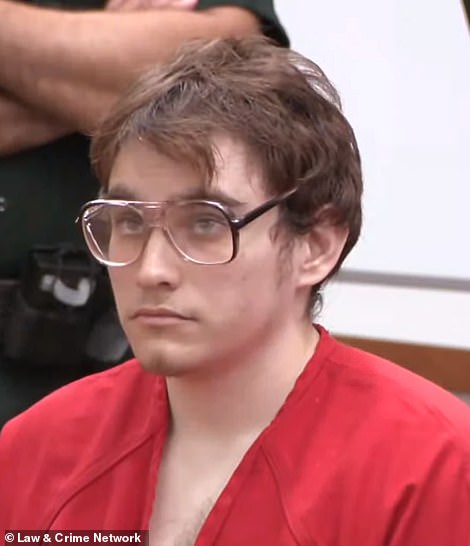 Cruz was told by one of the victim’s mothers to remove his COVID-19 mask. They said he was using it to make himself look innocent and was hiding behind it

‘What will happen to you in jail? You’ll be passed around like an inanimate object. Your protection will be paid for with your body. You’ll be someone’s b***h and you’ll deserve it.

‘You will be a commodity, traded like bubblegum, cigarettes and candy. My hope for my 70th birthday is to get word that you are dead, that the inmates executed the judgement that this court can’t.

‘I hope your death is slow and agonizing. It won’t be like a state execution. Prison justice is a b***h.

‘You will be wishing that the state of Florida had executed you in the compassionate way that they must by law,’ Michael Schulman, the father of murdered teacher Scott Biegel, said.

Many of the parents lamented having to remain silent throughout the sentencing phase of the trial so as not to jeopardize the outcome.

‘Let me share how angry and frustrated I am with the judicial sentence after four grueling years. Do I see this as accountability? Absolutely not. Do we now have closure? Absolutely not.

‘The system values this animal’s life over the 17 now dead. We sent a message to the next killer out there that the death penalty won’t apply. This is wrong,’ Ilhan Marc Aldaheff, whose daughter Alyssa was among those killed, said.

He begged the judge: ‘Put this creature in general population. Forbid TV, internet, mail, education. Let this creature be erased from society. Let him wear a shock collar like the animal he is.’

Prosecutors were seen wiping tears from their eyes as the parents thanked them for their efforts and assured them: ‘You did not let us down.’ 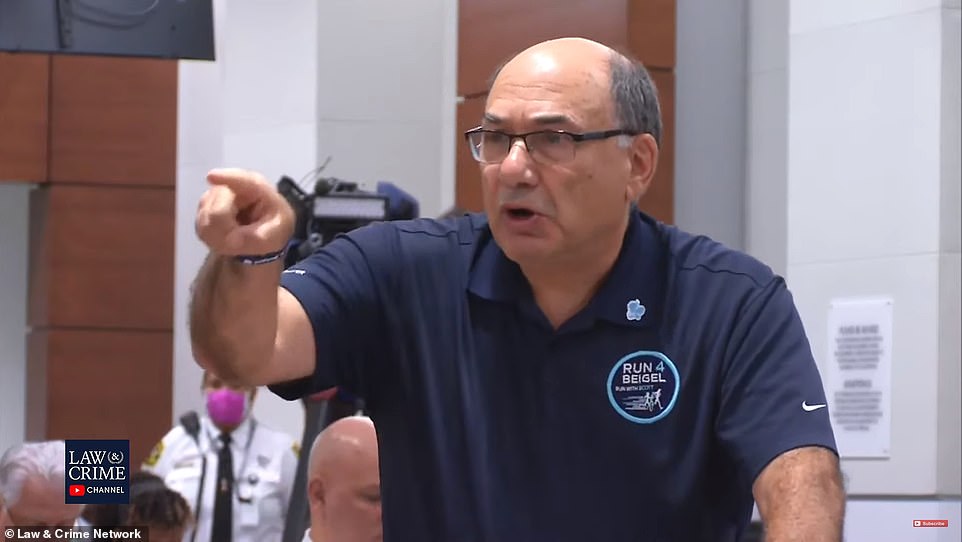 Michael Schulman, whose son Scott was murdered, begged for Cruz to be slaughtered in prison. ‘I hope your death is slow and agonizing. It won’t be like a state execution. Prison justice is a b***h. You will be wishing that the state of Florida had executed you in the compassionate way that they must by law,’ he said 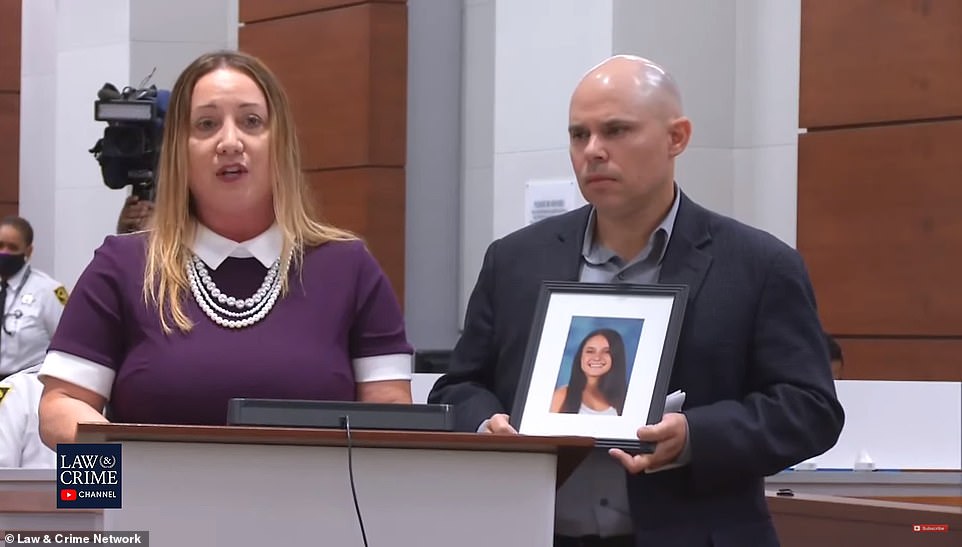 Ilhan Marc Aldaheff and his wife Lori were among parents who spoke at Wednesday’s sentencing hearing. Ilhan begged the judge to put Cruz in general population and afford him no additional mercy 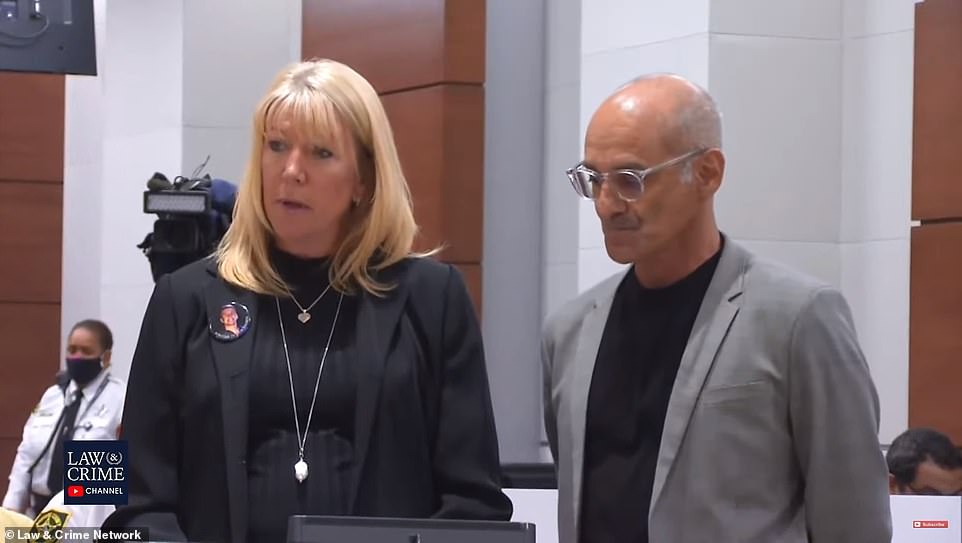 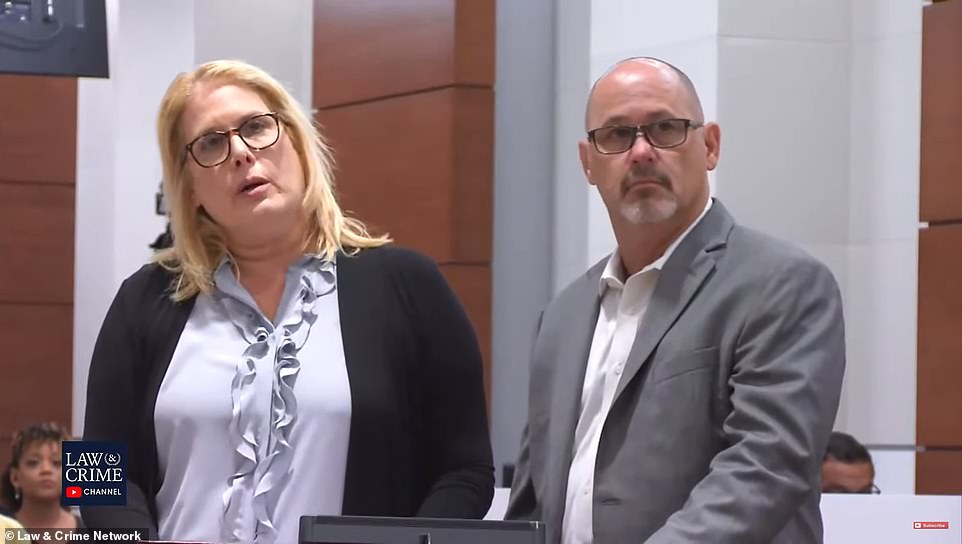 Jennifer and Fred Guttenberg, whose daughter Jamie was killed, were among those who spoke on Wednesday. Fred fumed at the defense team for their conduct throughout the sentencing phase of the trial, and asked: ‘I hope you’re happy. You did it. You got him off the death penalty’ 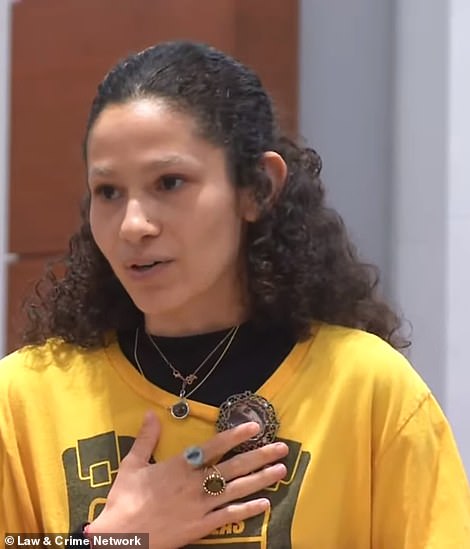 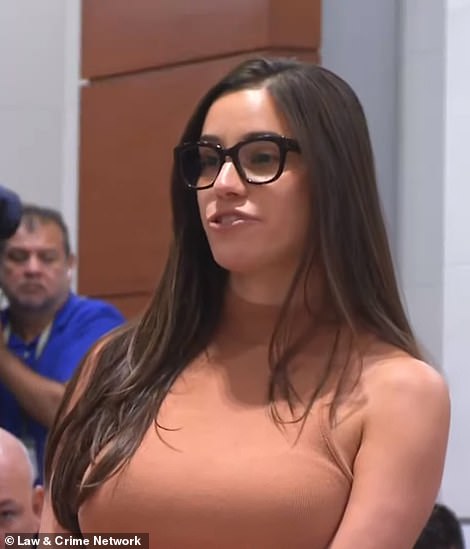 The sisters of Joaquin Oliver, who was in the school on the day of the shooting and escaped. One sister told Cruz: ‘F*** you’

Michael Schulman, the father of murdered teacher Scott Biegel, tore into the defense team and their conduct throughout the sentencing trial.

He praised the judge and the prosecution, prompting tears from some of the attorneys.

Schulman, who is an attorney in New York, said he would have been disbarred if he’d behaved the way some of Cruz’s lawyers did.

One was caught sticking a middle finger up during the proceedings.

‘Zealous representation of a confessed murderer does not mean flipping the bird when you think the cameras aren’t on you. You should be embarrassed. You had the balls to say no one has endured what he has endured.’

Jennifer Guttenberg, whose daughter Jamie was slaughtered, told Cruz to remove his COVID-19 mask, saying he was using it to hide his emotions from them.

At her instruction, Cruz removed it on Wednesday. Jamie’s father, Fred, fumed at the defense team for not showing ‘any humanity’ throughout the proceedings. 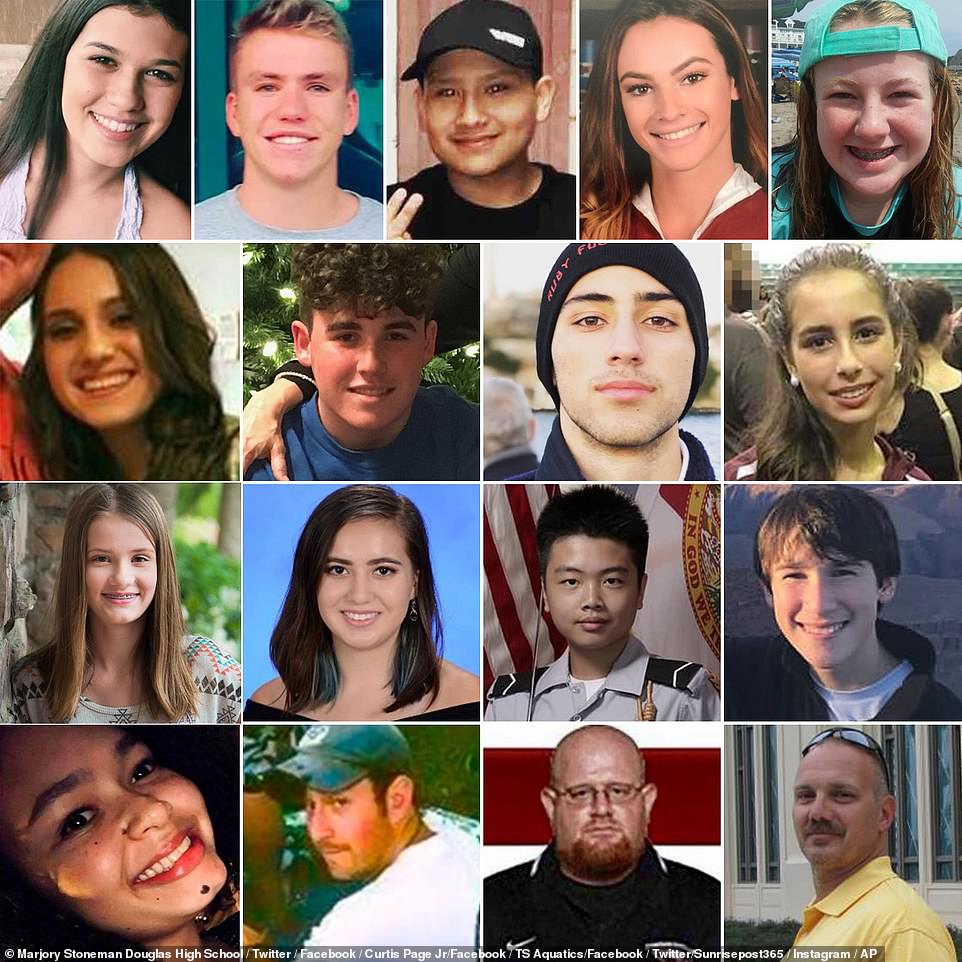 ‘I hope you’re all proud of yourselves. Months we’ve been here, not a single one of you has actually ever looked in our direction or made an effort to say I’m sorry for your loss. Ever.

‘I understand you had a job to do, you were doing your job as you were required to do, but I am not sure anywhere along the way that there was a requirement to give up your humanity and decency. But you did it.’

‘One of the most disgusting and unprofessional things to happen in this courtroom was the defense team, holding, touching and giggling with this cold blooded murderer.

‘This was so offensive to our family as well as our son Nicholas’s memory.’

Yesterday, defense attorneys enraged the judge by bringing up her children while complaining about having to listen to the parents’ victim impact statements.

Judge Scherer dismissed one of the defense lawyers, saying he ‘violated every standard’.

Broward County Circuit Judge Elizabeth Scherer agreed to a prosecution request to first allow relatives of Cruz’s victims to address the court before the sentence was handed down.

A number of victims’ relatives castigated the jury’s decision and criticized a state law requirement that all 12 jurors be unanimous in order to sentence a convicted person to be executed.

Some relatives also chided Cruz’s defense lawyers, who fruitlessly objected to the judge on Tuesday, noting that Cruz had a constitutional right to legal representation.

Many victims’ relatives directly addressed Cruz, who sat inscrutable behind large spectacles and a COVID-19 mask at a table alongside his public defenders.

Anne Ramsay, the mother of 17-year-old Helena Ramsay, told him he was ‘pure evil’ Inez Hixon called him a ‘domestic terrorist’ for killing her father-in-law, school athletics director Chris Hixon.

Cruz was 19 at the time of his attack on Marjory Stoneman Douglas High School in Parkland, about 30 miles north of the courthouse in Fort Lauderdale. He had been expelled from the school.

Some of the survivors went on to organize a youth-led movement for tighter gun regulations in the United States, which has the highest rate of private gun ownership in the world and where mass shootings have become recurrent.