NSW has reported 1257 new local coronavirus cases and seven deaths on Monday, as Premier Gladys Berejiklian warned the state’s vaccination rate was not increasing as rapidly as it has over the past few weeks.

Ms Berejiklian said there had been a “slight slowdown” in vaccinations across the state. More than 46 per cent of people aged 16 and over in the state are double-dosed and 78.5 per cent have received one shot. 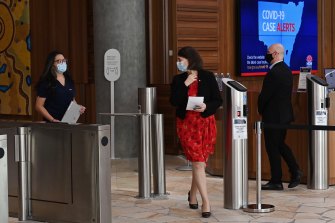 While fully vaccinated people were allowed to gather outdoors for recreation from Monday morning, the Premier asked people to “not let their guard down”. “Any event that we don’t anticipate or expect could see a major setback and none of us want to see that happen,” she said.

Ms Berejiklian has said people who do not get vaccinated should “not assume” they will be able to exit lockdown restrictions after her deputy suggested earlier on Monday morning they could only be excluded from home visits and businesses for a matter of weeks.

“Don’t assume that at 80 per cent double-dose vaccination that unvaccinated people are going to have all those freedoms. I want to make that point very clear,” Ms Berejiklian said, adding the state government had not finalised its plans.

“For those of you who choose not to be vaccinated, that’s your choice, but don’t expect to do everything that vaccinated people do even when we hit 80 per cent.”

Her comments came after Deputy Premier John Barilaro told two different breakfast radio programs on Monday morning it was likely businesses would only need to turn away unvaccinated patrons for “three to four weeks”.

Mr Barilaro said he expected people would have the same freedoms regardless of their vaccination status once 80 per cent of the population were fully vaccinated.

“There will be businesses that don’t like the idea either [of mandatory vaccines] but the 70 per cent road map gives us an opportunity to open up the economy and lift restrictions,” he told 2GB.

“If they don’t want to do it that’s fine, you might have to wait another three to four weeks after that when we get to 80 per cent and above.”

Speaking later on Canberra radio station 2CC, Mr Barilaro said there would be very few restrictions for everyone when 80 per cent of people aged 16 and over were fully vaccinated.

“We are turning unvaccinated customers [away] for a period of probably three weeks,” he reiterated.

Under the plan agreed to by national cabinet, vaccinated residents will be exempt from all domestic restrictions when 80 per cent coverage is reached.

The virus has continued to infiltrate vulnerable communities across Sydney, with health authorities particularly concerned by transmission in the inner city.

Fourteen residents and two staff at Frederic House, an aged care facility providing accommodation to about 60 men who are at risk of homelessness in the inner Sydney suburb of Waterloo, tested positive to COVID-19 last week.

Although the bulk of virus exposures at aged care homes have not led to resident cases during the outbreak, some larger clusters have formed this month, data released by the federal government shows.

An additional 26 residents at Guildford Nursing home caught the virus during the week, bringing the number of positive residents from the western Sydney facility to 28. The largest aged care cluster on Friday was Hawkesbury Living Nursing Home at Richmond, where 31 residents and 11 staff are positive and one resident has died of the virus.

A total of 16 resident cases have also been detected across two aged care facilities operated by Catholic Healthcare at Dubbo, in the state’s west.

There were 473 new cases reported in Victoria on Monday. A Melbourne school that encouraged families to send their students despite government directions to work from home is facing a significant outbreak.