A 62-year-old man in New York City was swarmed by a group of seven men who were captured on disturbing video striking him with what appeared to be a wooden object before stabbing and slashing him on a Manhattan sidewalk early Wednesday.

The brutal assault happened in front of 315 West 44th Street in Midtown just after 5:30 a.m., when an unidentified male approached the victim from behind, the NYPD said.

One suspect first strikes the victim on the back of his head with what appears to be a piece of wood, knocking the 62-year-old to the ground, according to video released by the NYPD.

Video released by the NYPD shows an unidentified male struck a 62-year-old male from behind with an object, knocking him to the ground. Police said six additional unidentified males then approached the victim on the ground, stabbing and slashing him.
(NYPD Crime Stoppers)

As the man falls flat on the sidewalk, video shows six additional unidentified males swarm the victim. Police said the group stabbed and slashed the victim multiple times before fleeing on foot.

The victim suffered stab and slash wounds to his body, head and nose, according to police. He was rushed in critical condition to Bellevue Hospital, where he was stabilized. 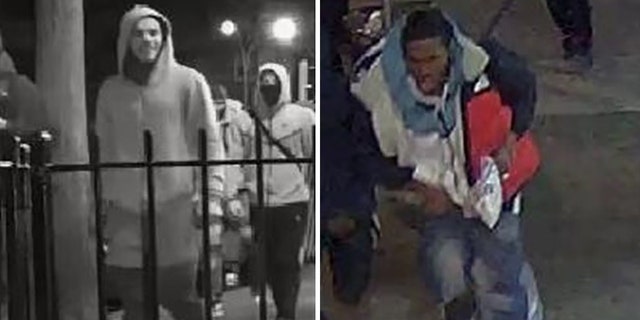 During the first week of November, police data shows citywide felonious assault cases were up 6% compared to the same period last year, with 442 cases versus 417 in 2020.

Through October, citywide crime year-to-date reached 80,801, a 1.3% increase compared to the same period in 2020, according to NYPD statistics.

Authorities asked anyone with information about the incident to call the NYPD’s Crime Stoppers Hotline at 1-800-577-TIPS (8477).