A BABY boy was fatally shot in the chest while on a trip home from a Chicago laundromat with his mom.

The child’s mother, 22, drove him to St. Bernard Hospital where the 20-month-old was pronounced dead, say cops. 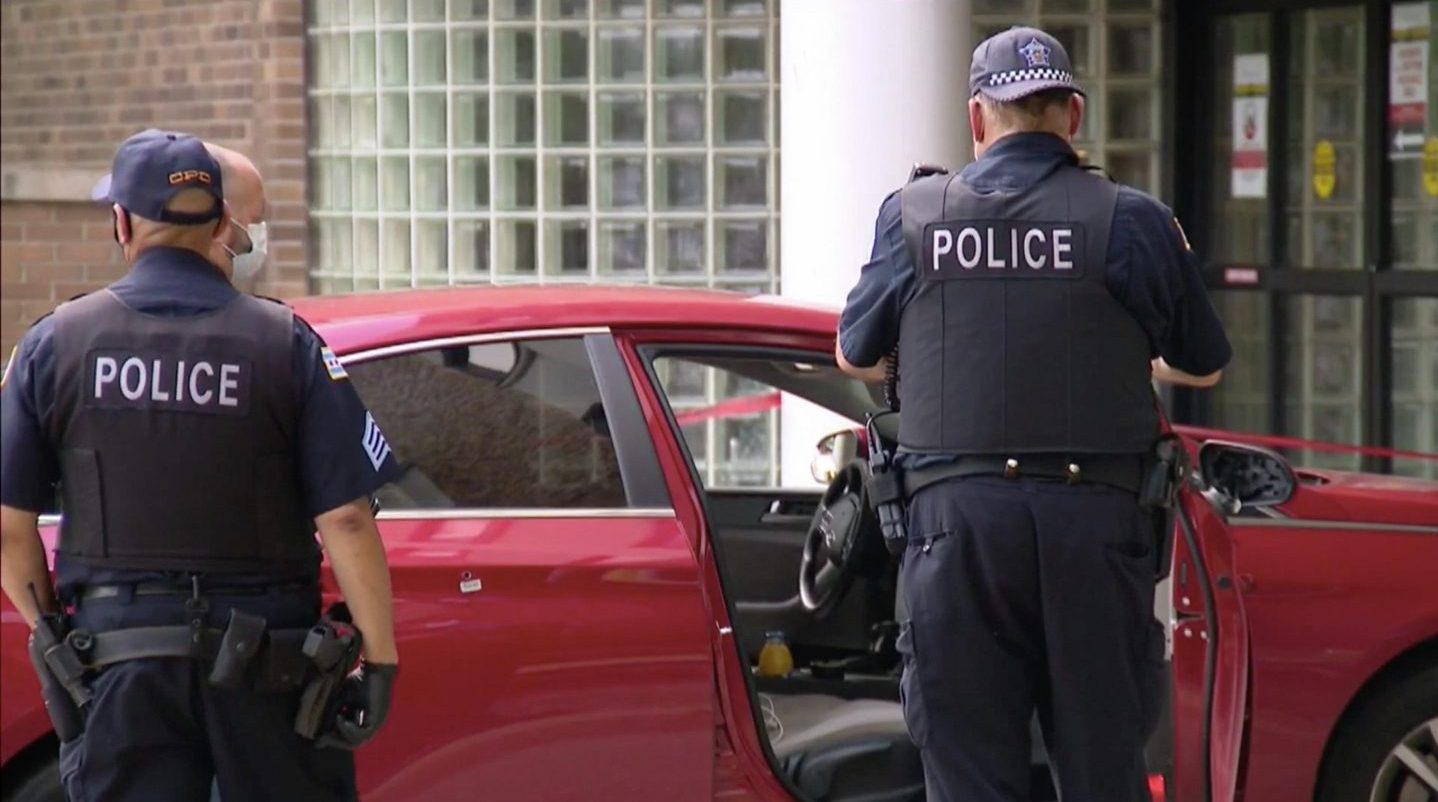 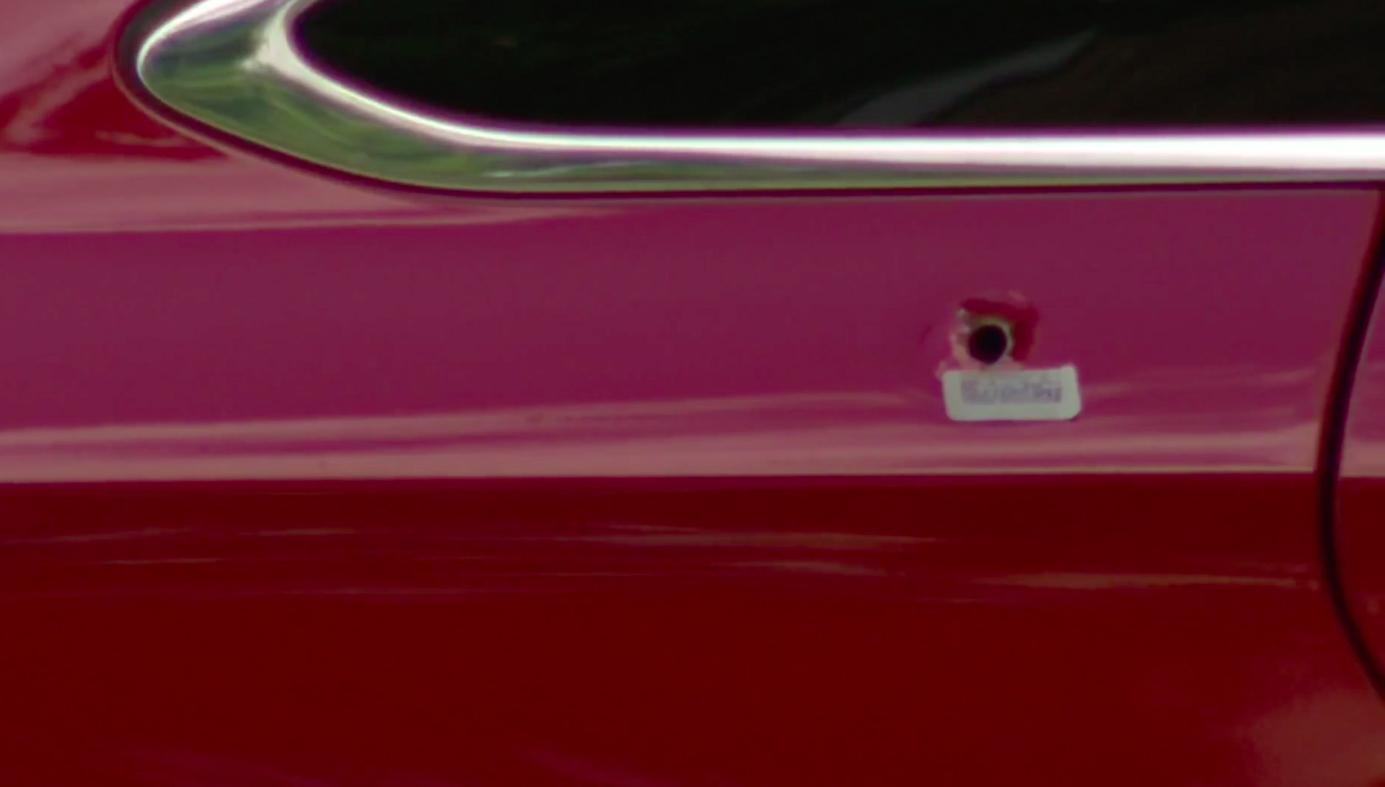 Chicago police Chief Fred Waller told reporters that the pair were traveling through the city’s South Side on Saturday afternoon when the baby was shot once in the chest while in his car seat.

He said the fatal shooting occurred after 2pm when the mom was heading south on Halsted Street near 60th Street, on her way home from the laundromat.

Her baby was sitting in a child seat in the back of the car.

Suddenly, another vehicle pulled up alongside them, and someone inside that car started firing at them.

Tragically, the baby received a bullet to his chest, while the mother’s head was grazed with another bullet, Waller explained.

NBC Chicago reports that the injured woman was later transferred to the University of Chicago Medical Center for treatment. 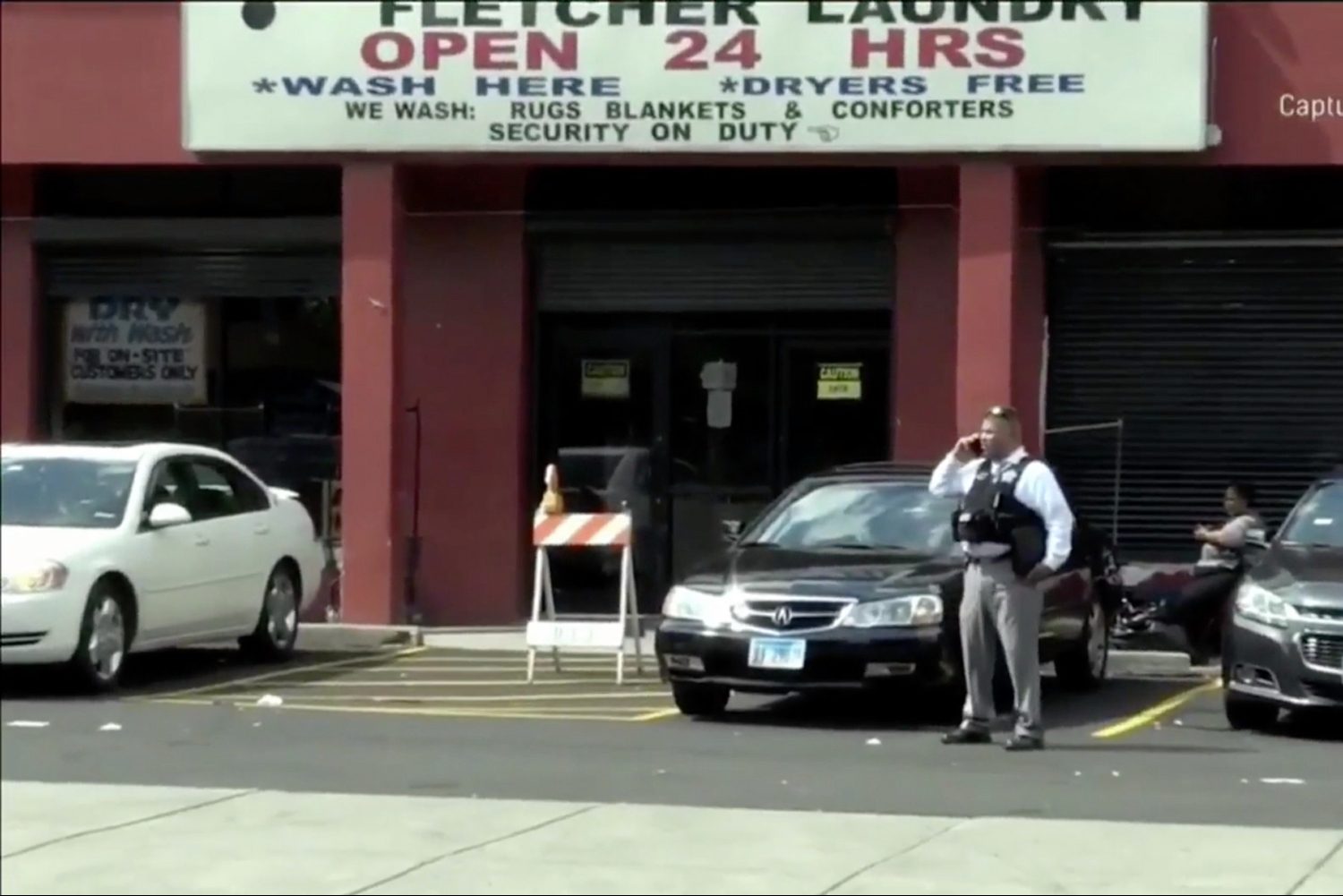 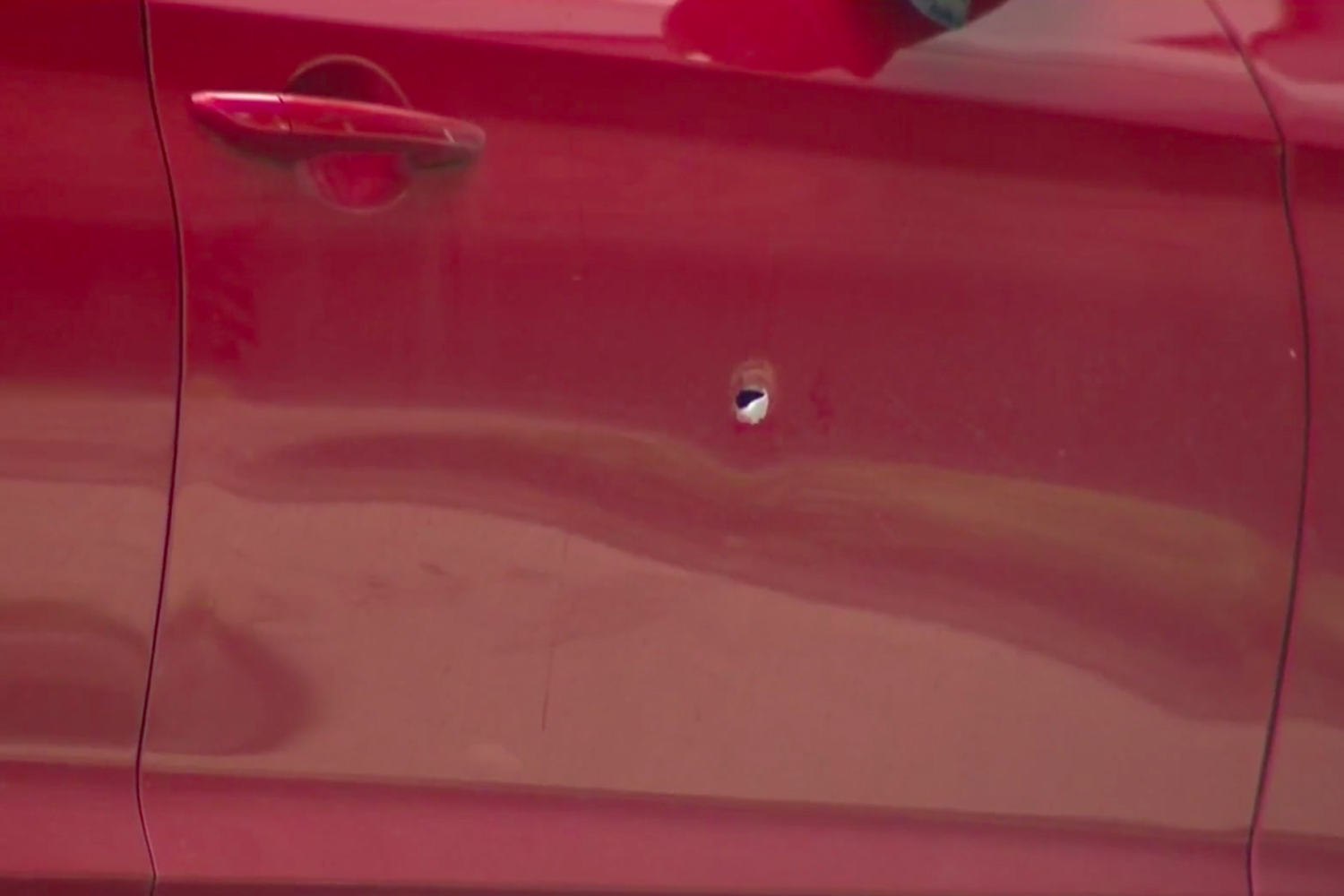 The baby's shocking death comes days after 14 people, including five children, were killed as more than 100 people were shot in a wave of gunfire in Chicago over the Father’s Day weekend.

Among those victims was three-year-old Mekhi James, who police said was fatally shot as the boy was in a car with his dad in the south Austin neighborhood.

Police said the child’s 27-year-old father was the intended target when someone fired shots at the vehicle.

Waller said: “It seems like just yesterday – it was actually last Saturday, I was in front of you all talking about a three-year-old that was killed in the Austin community, and now here in Englewood, a 20-month-old was killed.

“This is happening far too often.

“Too many times children are killed by senseless violence, and not only just children, but grown-ups also.

“When is this going to stop? When are we going to say enough is enough?”

Heartbroken for the devastated parents, he later tweeted: “A one year old has been shot and killed.

“I really wish I had something to say…when I got ready to leave to go to this shooting I took a towel with me.

“I didn't expect to be filled with the blood of the mother of this 1 year old and to hold her and the father and feel their level of pain.

“This is one of if not the first time that I just want to sit on the curb and cry."

He told reporters a weapon hasn't been recovered as yet, but it's assumed the killer used a handgun, based on evidence found at the scene.

Waller added: “No doubt we’ll catch the person who did it.

"We’ll catch the person who killed that three-year-old [over the Father's Day weekend].

"We’ll catch the person who killed this kid.

"Today, we lost more young people to the gun violence epidemic: a 17-year-old in Humboldt Park and a 1-year-old in Englewood.

Ex-mayoral candidate and civil rights advocate Ja’Mal Green tweeted that he is offering a $5,000 reward for information leading to the arrest and conviction of the gunman who killed the baby.

Urging those who know the shooter to “speak up, the code has been broken”, he added: "My youngest is 1 years old.

"I couldn’t imagine this happening to my kids. 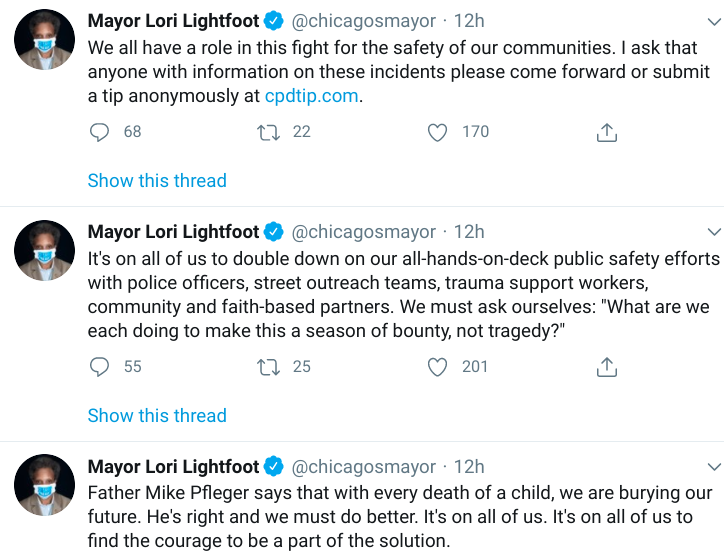 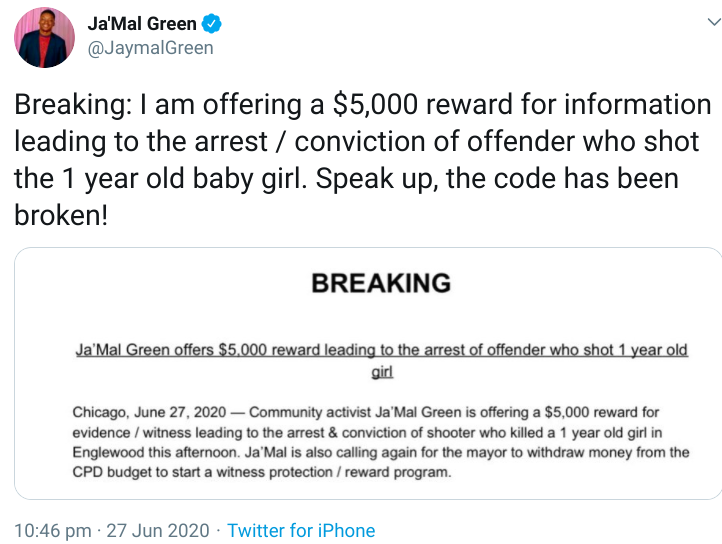 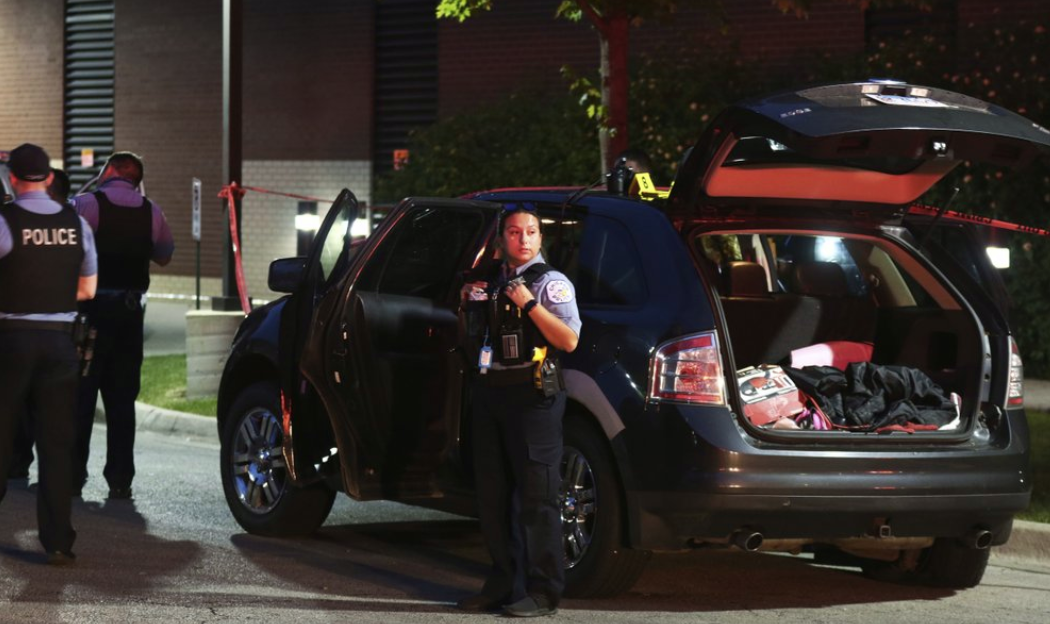