A Legoland-inspired haven, a shed floating on skis and a black cab converted into an outdoor bedroom are among the unique structures hoping to be crowned Shed of the Year.

The Cuprinol-sponsored competition, now in its 11th year, attracted nearly 3,000 entries which have been whittled down to 24 hopefuls.

Sheds in eight hotly contested categories – which include eco-friendly creations, budget outbuildings and historic-like structures – will battle it out for the 2018 title and a £1,000 cash prize.

A winners plaque, a giant crown and £100 worth of garden woodwork products are also up for grabs.

The next stage falls in the hands of the public, who will vote for the best shed in each category before a ‘panel of shed experts’ decides on the victor.

Among the innovative buildings which have left ordinary tool sheds quaking sits one structure made out of glass bottles.

The Bottle Shed in Scarborough, owned by Lauretta and Philip Denton, was inspired by an old primary school teacher and made from materials collected over decades.

Scroll down to find out more about some of the wonderful sheds in this year’s competition. 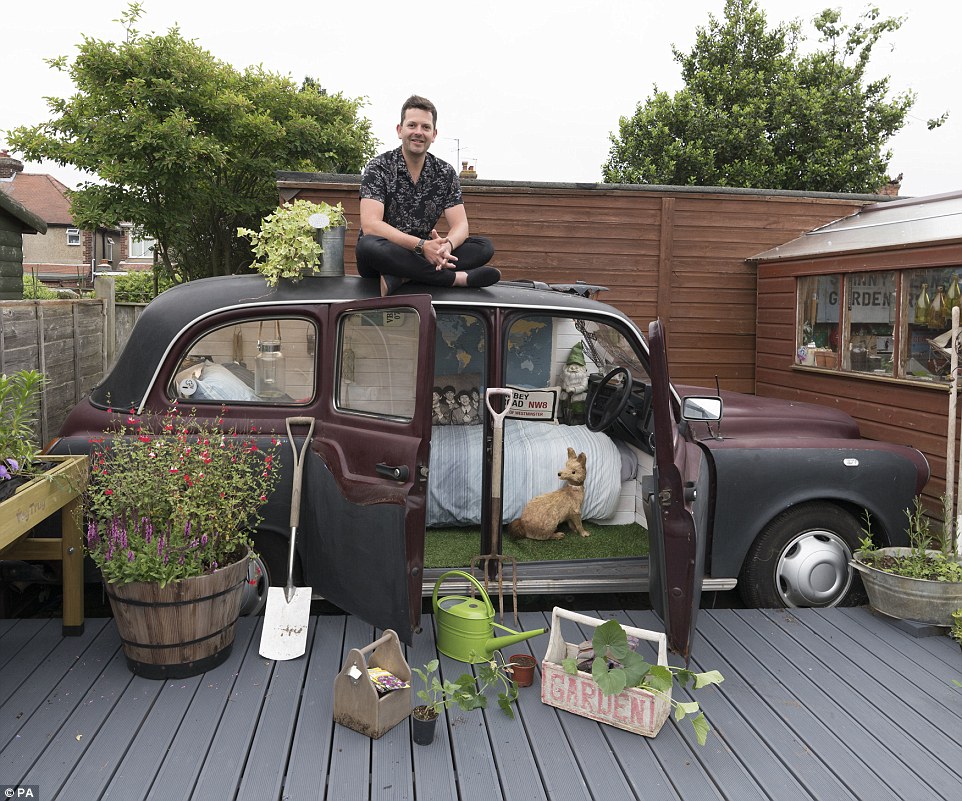 The Taxi was formerly an old London Black Cab which now been converted into an outdoor bedroom. It has become a focal point of Lee Connelly’s garden and used a a social and work area next to an allotment. It even has its own bed. 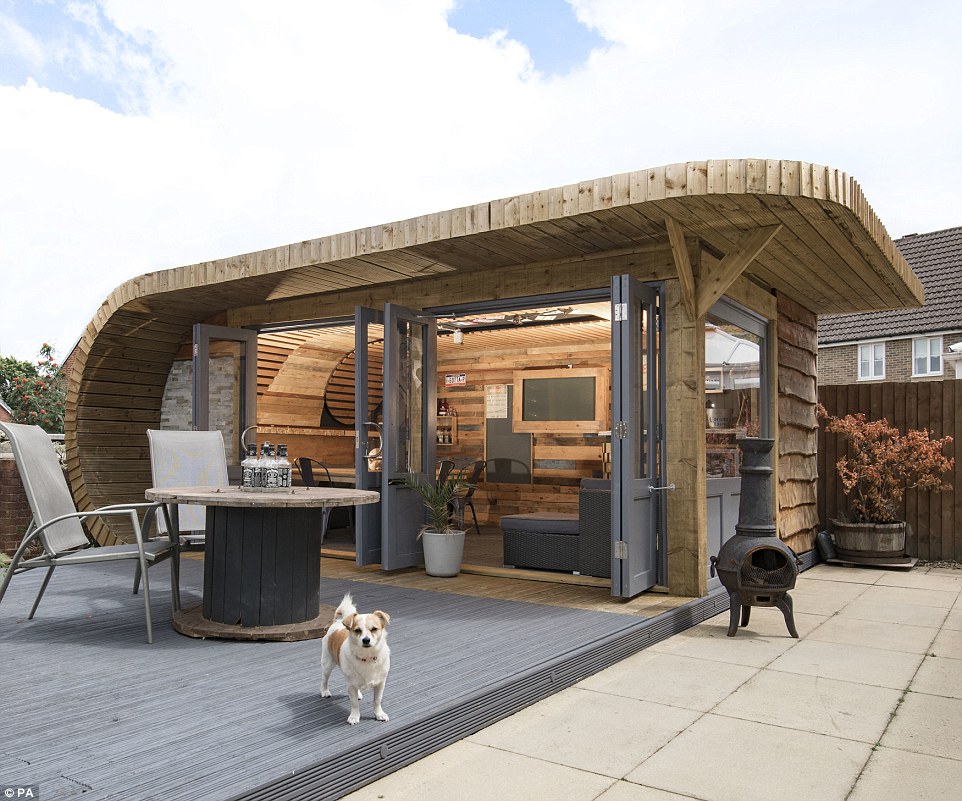 Noah’s by David Morris appears to be wave shaped and is fighting it out in the pub and entertainment category. It has its own entertainment’s hub complete with bar stools and a TV 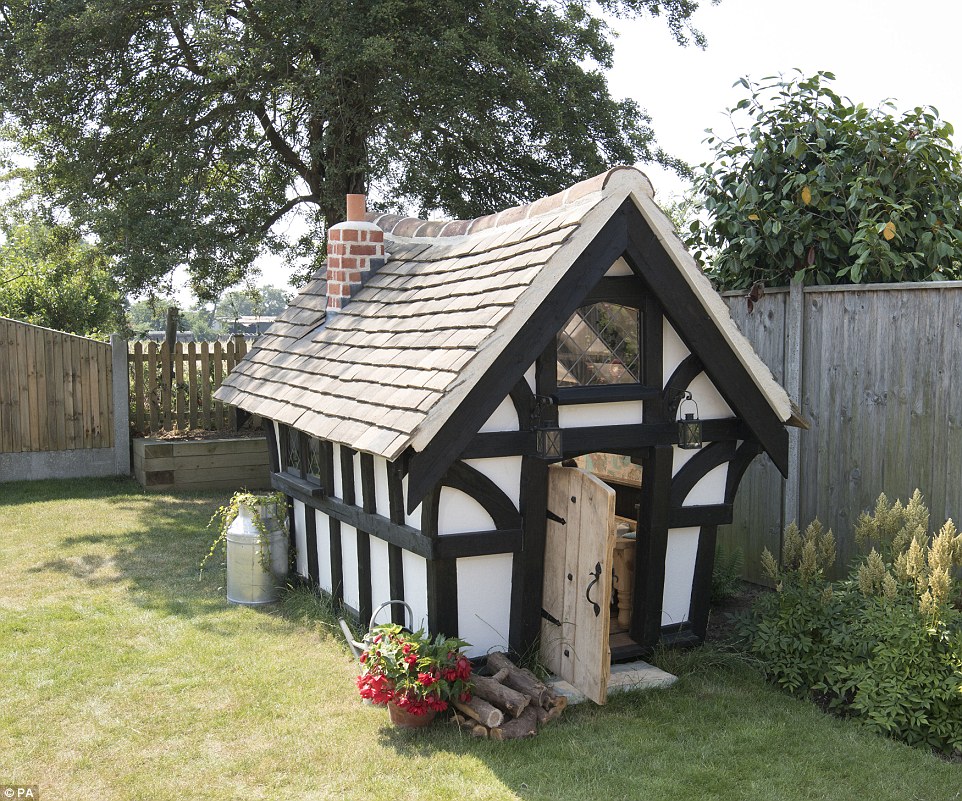 Tudor Playhouse is a small playhouse built for Craig Clavins twin boys Hugo and Ralph in Norfolk. It’s built from mostly reclaimed and salvaged materials, and despite them both being only three and a half years old, it has so far represented a great father and son project. The door and floors are made from old scaffold boards, with the frame constructed of old fence posts 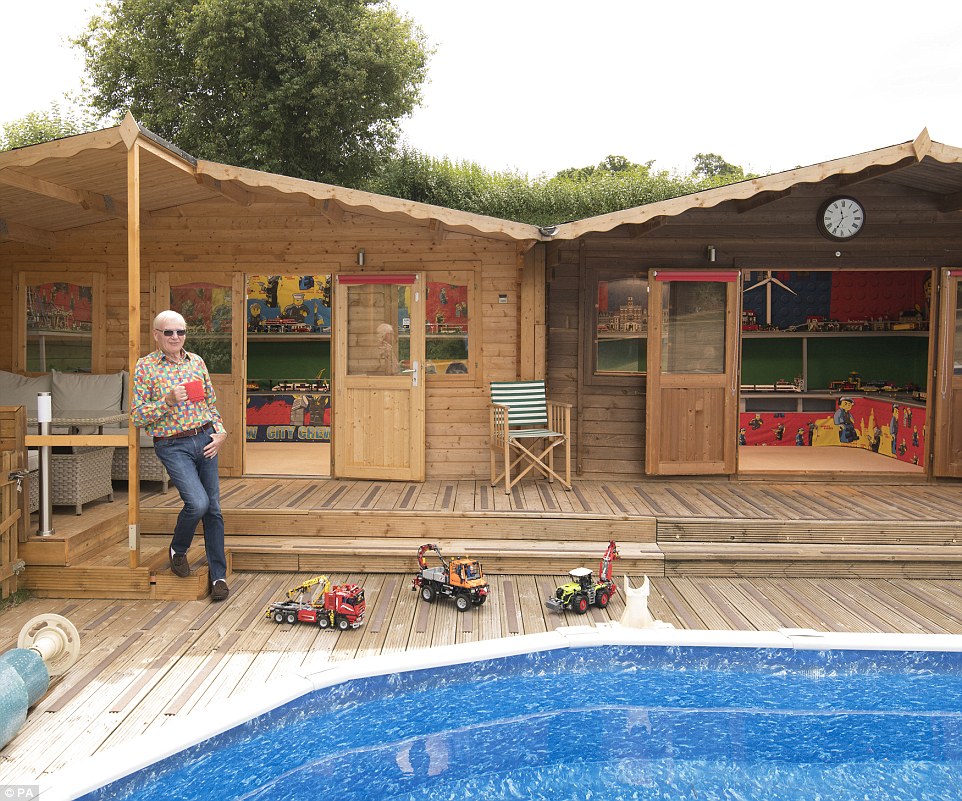 Geoff Pike first built a wooden cabin 12 years ago which he stored Lego in. When his collection grew he created an adjoining cabin to store it in. Bricks and Water now has an outdoor pool too 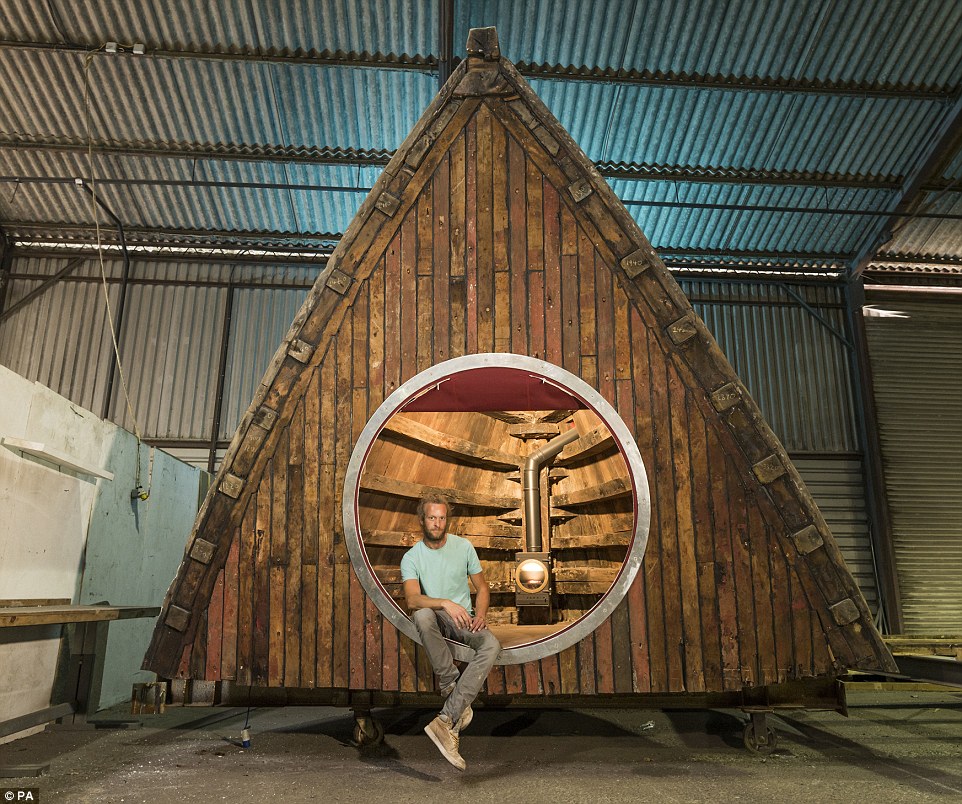 Boat Pod created by Barnaby Dearsly in Exeter, Devon is a magical shed with a plethora of uses. It is made from the upturned bow section of a decommissioned fishing trawler built in 1945 and acts as a retreat space with a difference. It has been made watertight using marine resin and cloth 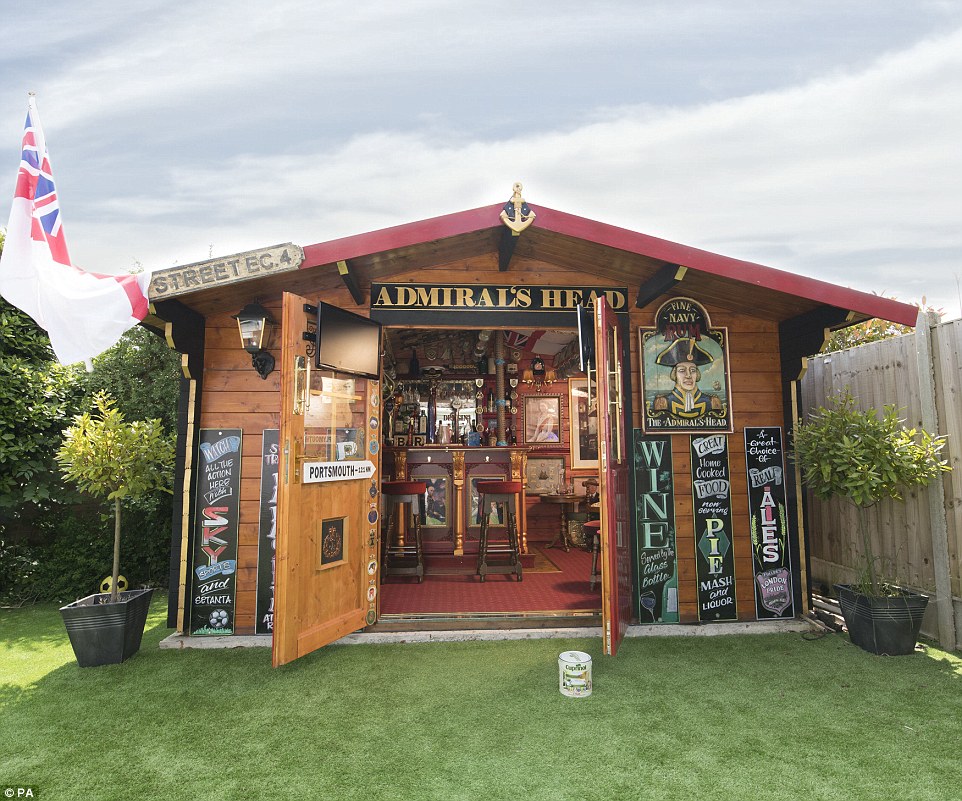 The Admiral’s Head took Lee Carrie just short of a year to build. The signs are all hand made (with exception of the external Horatio Nelson pub sign). Among its features are LED lighting, under, around the back and at the side of the bar. It also has a large drinks fridge under the counter with a fire place and electric fire, decorated with beer bottle tops 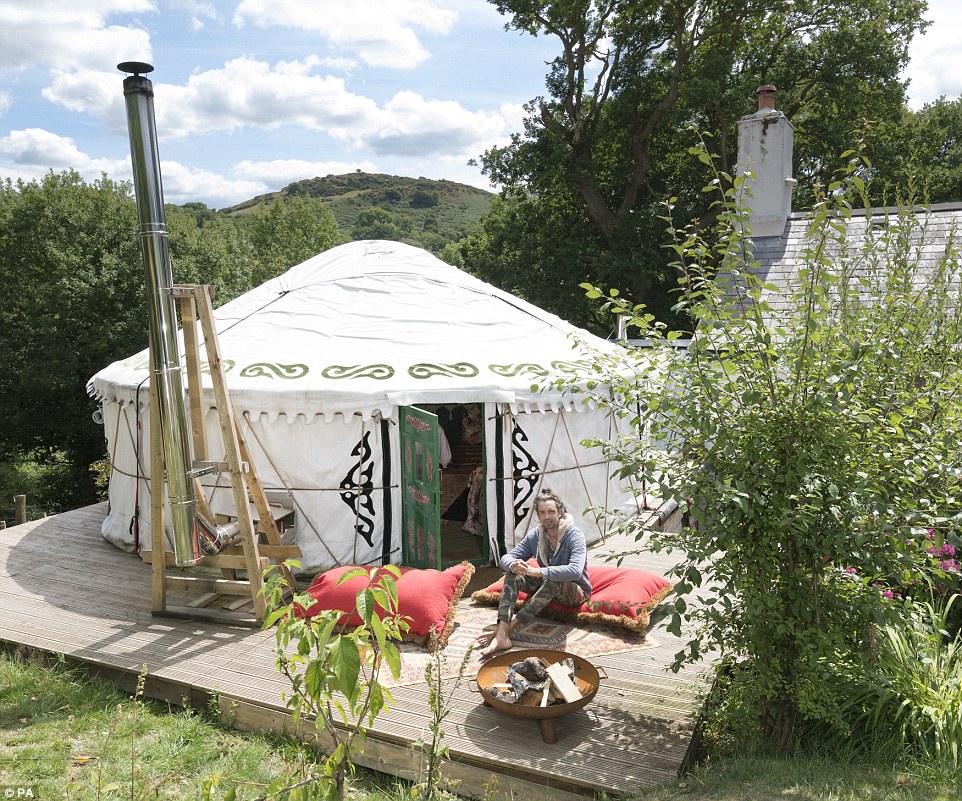 Jack Fetherstonhaugh’s imaginative Hapas Yurt is a yurt that has a shed underneath it and can sleep five people. The timber shed is set in a Welsh hillside in an opening surrounded by forest with beautiful views. The shed is beside an old barn and the two are connected  through ‘a rabbit hole’. It has a spiral staircase, a rose stain glass window and  a loo with a view 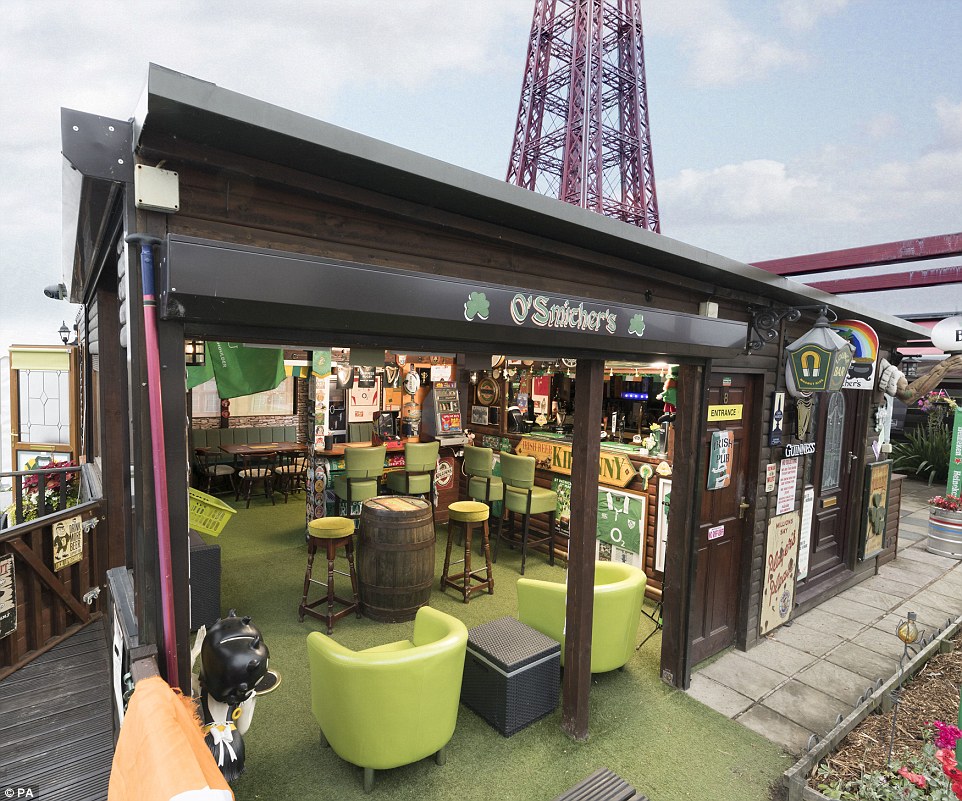 OSmithers is a proper Irish bar in Blackpool with a rugby theme on the inside. It is authentic with everything that you would expect to see in a genuine commercial Irish pub. It has a 25ft replica of Blackpool Tower on the roof which was built during the Second World War and has been restored updated 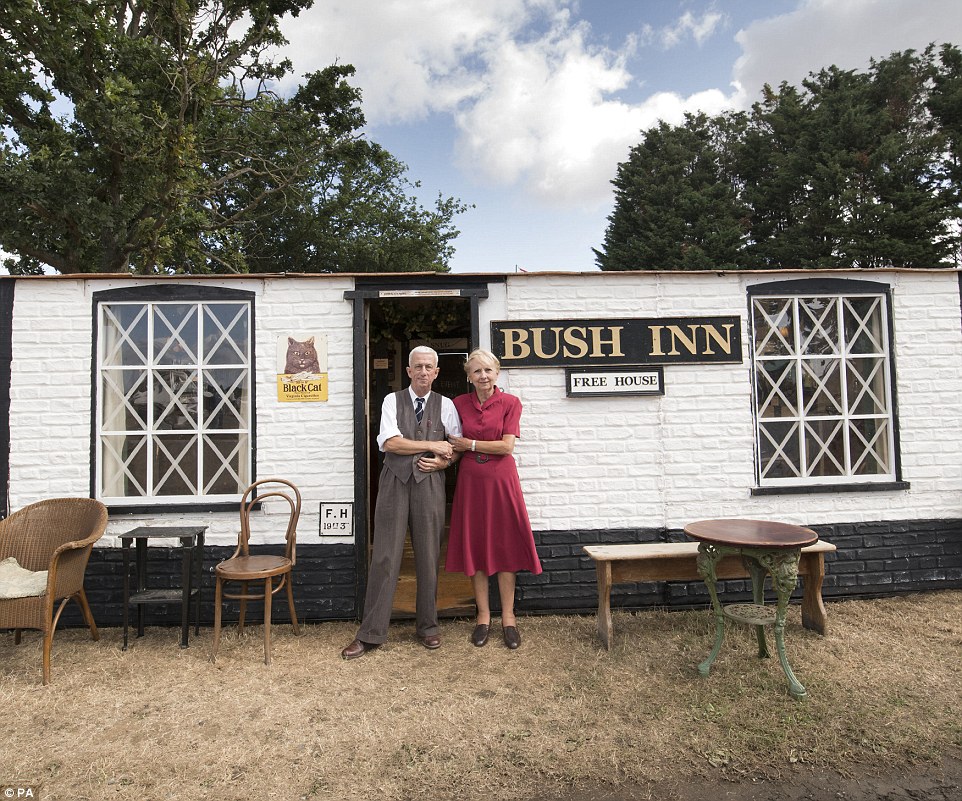 The Bush Inn, created by John Parks is themed around pubs found during the Second World War. It makes appearances at many military reenactment events such as the War and Peace Revival held on Folkestone Racecourse. The fixtures and fittings are either pre-war, wartime, or thereabouts to give an authentic feel. 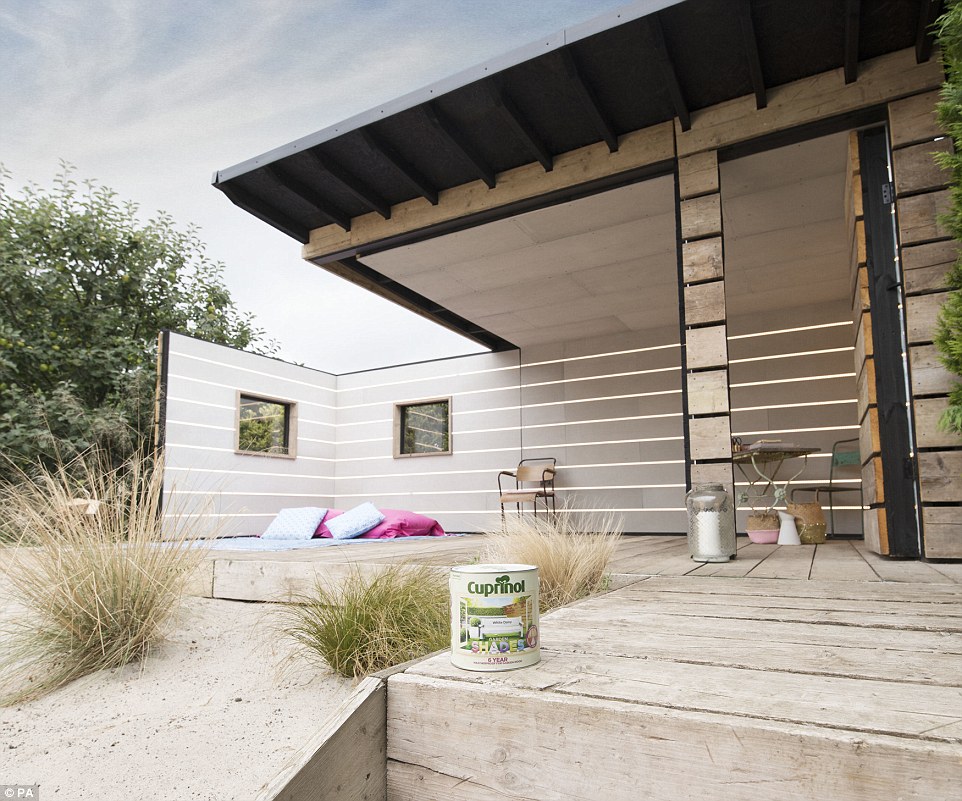 The Scaffold Board Summer House has over 100 metres of LED strip lighting, and a huge pivoting action where two of the walls rotate to open up the space. The cantilever roof then floats above it. It was featured on George Clarke’s Amazing Spaces on Channel 4 which puts inspirational small-builds in the spotlight 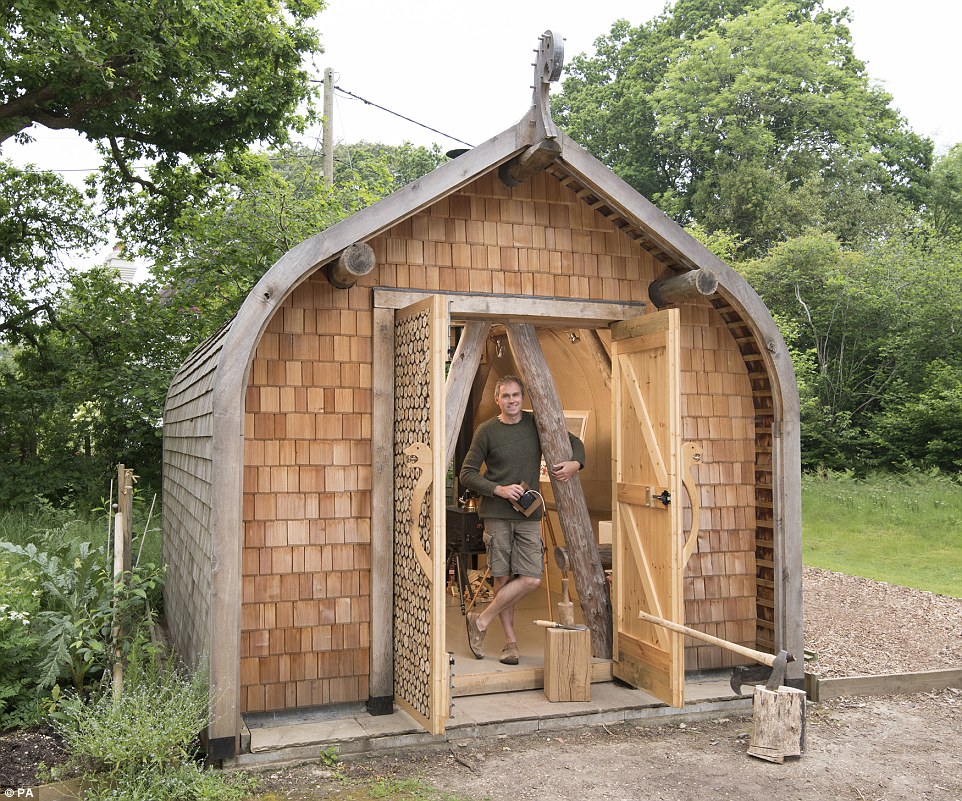 Chris Walter’s Viking Bauhutte is a Middle Ages themed structure that acts as a workshop, an artists’ studio, family craft room and a space to design and build cameras. It has a Viking motif dragon handles to the doors. The construction is based on a roundwood chestnut frame, the internal walls are clad in birch ply and the ceiling is painted hardboard 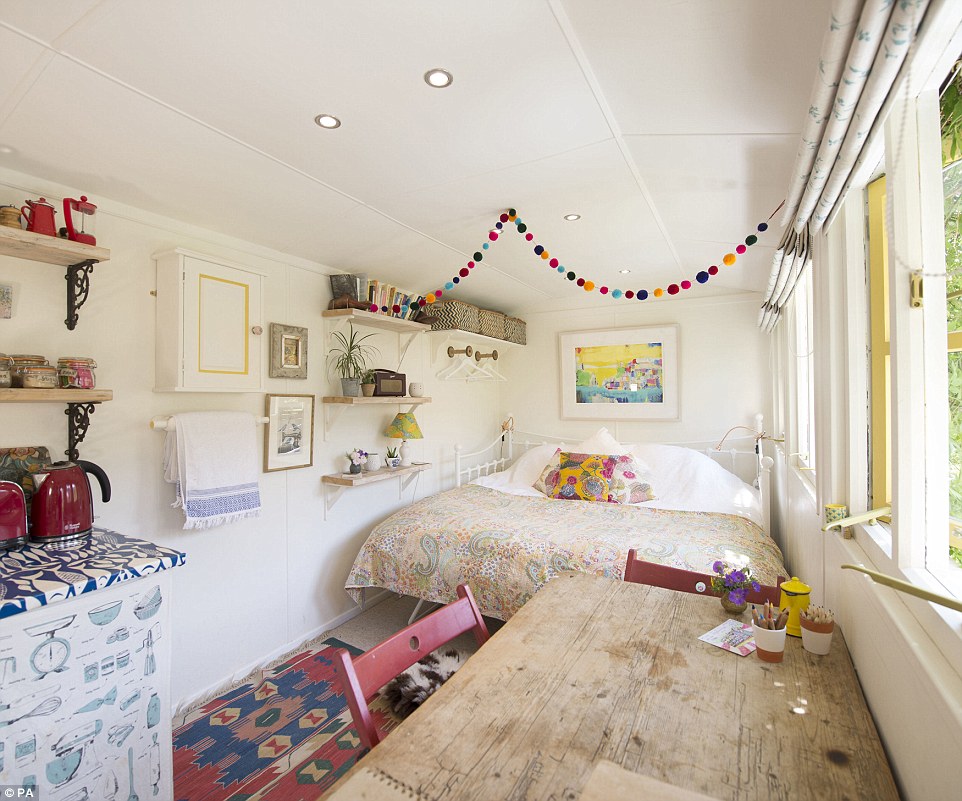 The Shed and Breakfast is run as a bed and breakfast on Airbnb. It has a bright yellow exterior with jasmine, honey suckle and clematis climbing up it. Inside you’ll find a super king sized bed, its own little kitchen with two hobs and access through the garden to a private shower room in the house 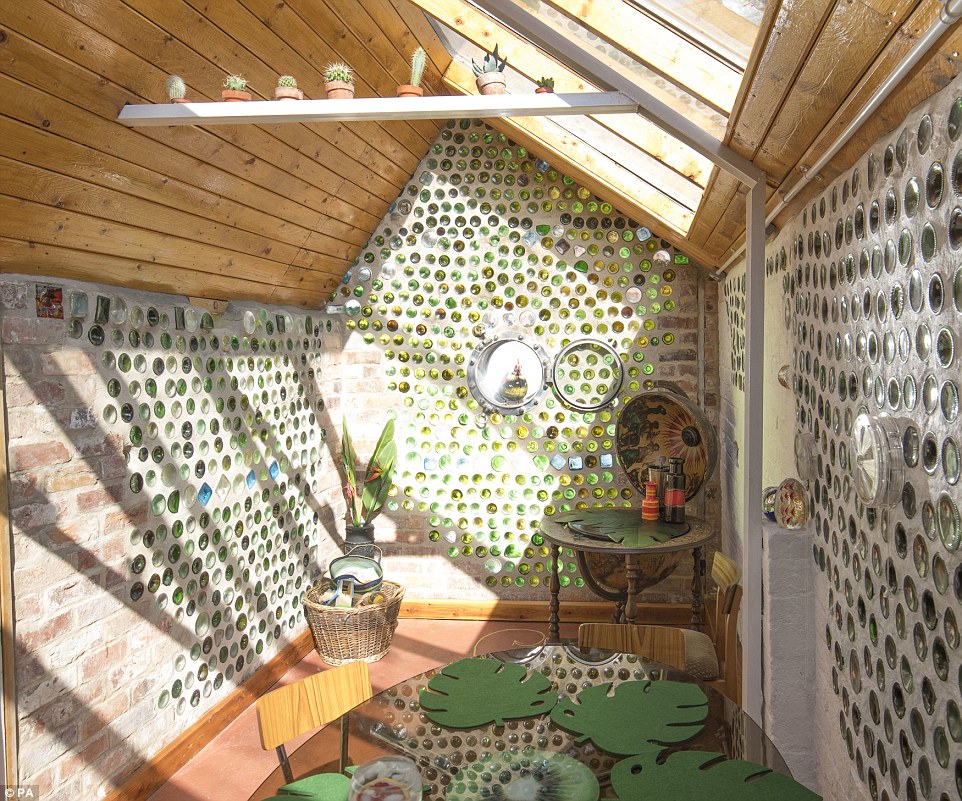 Bottle shed, owned by Lauretta and Philip Denton in Scarborough, is made almost entirely from reclaimed materials and is the result of a 35 year old childhood den builders dream. It has developed organically over four years. It pays homage to light and is created from materials collected over the decades 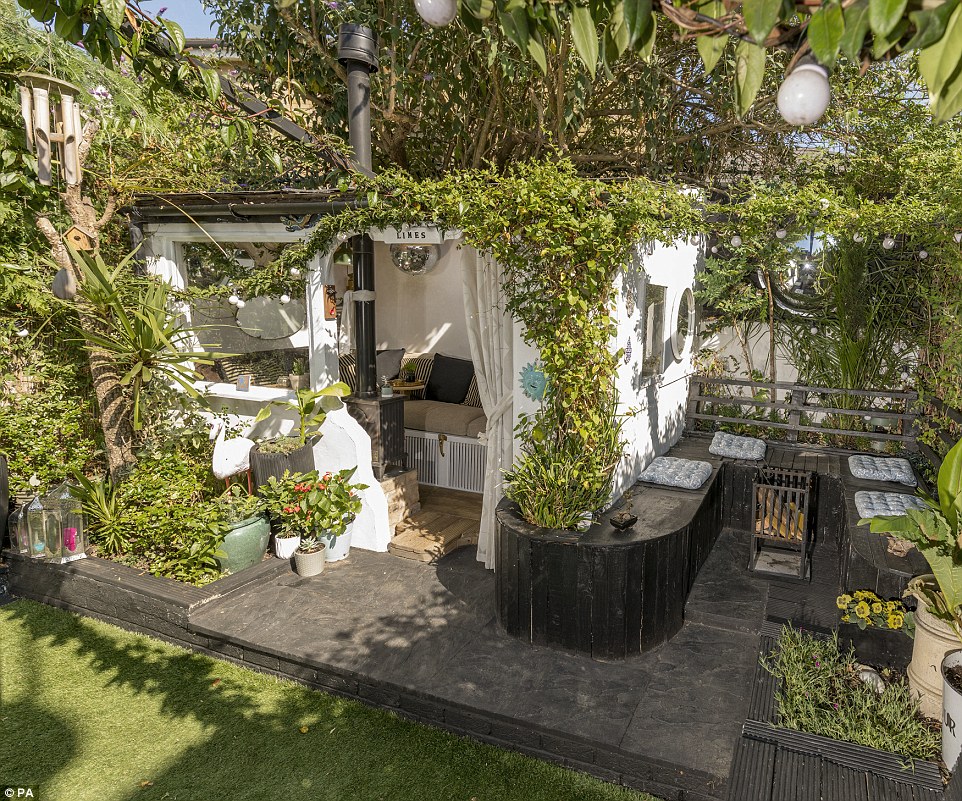 The Limes, designed by Mike Allport is an open fronted summer house that has an added skylight and side window to flood the space with light. 90% of the materials used to make it have been scavenged from the ice cream factory next door to Mike (with permission) or from local skips, friends and family 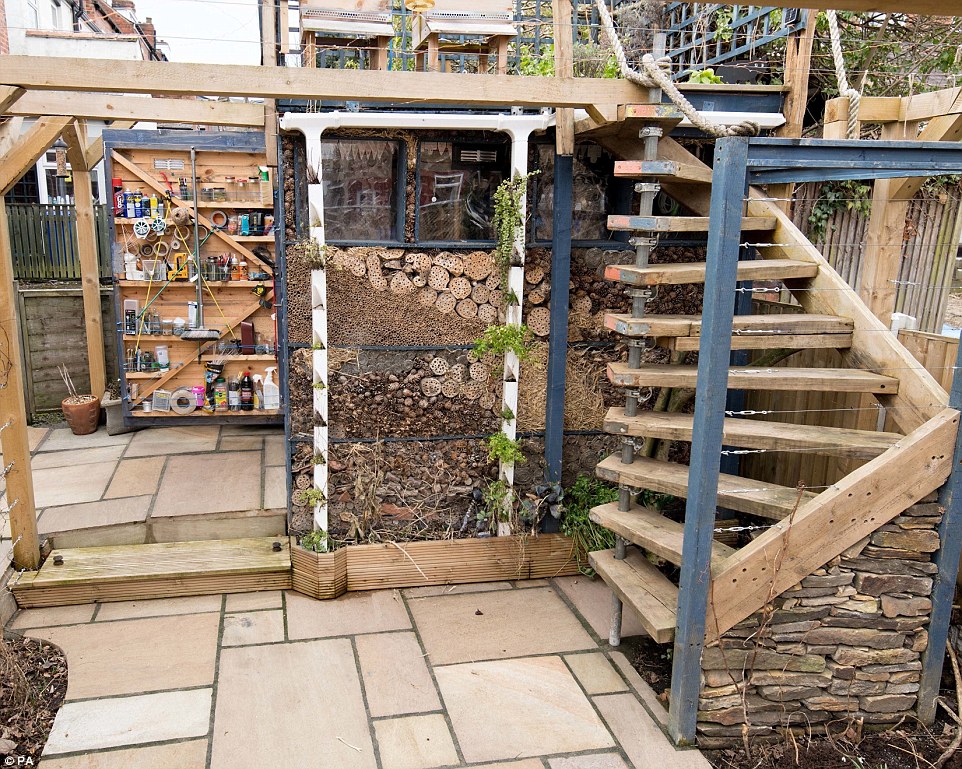 George Smallwood’s Bee Echo Shed has a spiral staircase to the roof where there are beehives and a giant bug house on one wall. The roof has flowers and vegetables on it and when the water reaches the gutters it waters a herb garden and a garden  built at the base 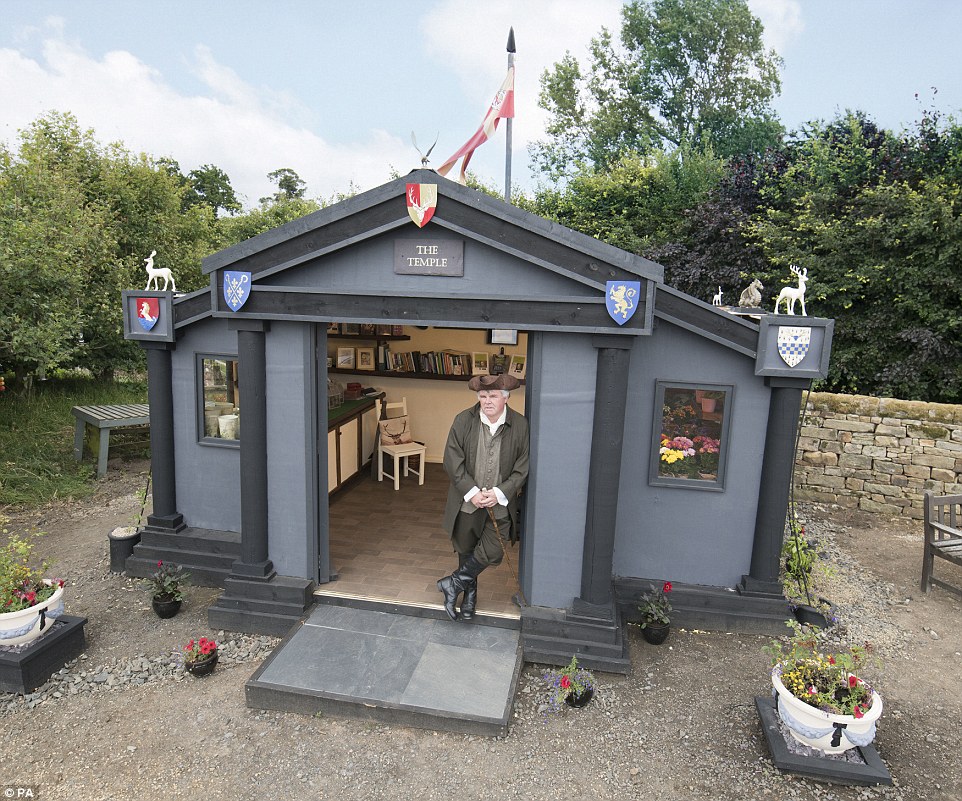 The Temple – Kirkharle – Northumberland is the creation of Angus Robert Thompson who is passionate about plants and the history of Northumbria. The Temple is a Greek design and has gothic colours. It is a functional structure used as a base for the historic walks around Kirkharle and also is used to sell plants, flowers, garden sundries and books 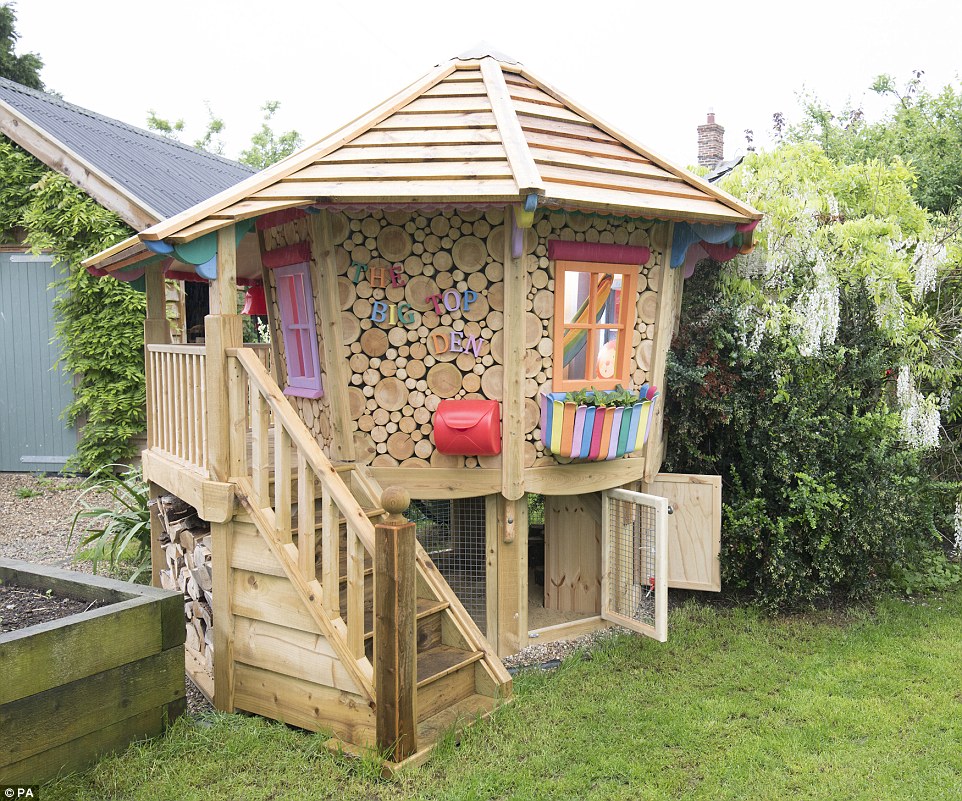 Steve Burrow’s Big Top Den in Longcut, Oxfordshire is an octagonal play den for kids. It has a built-in blackboard, shelving, hammock, multi coloured floor and a circular light box covering the entire ceiling. There is a built in rabbit and guinea pig hutch and pen beneath the playhouse with a secret door that allows pets to come up into the den to play 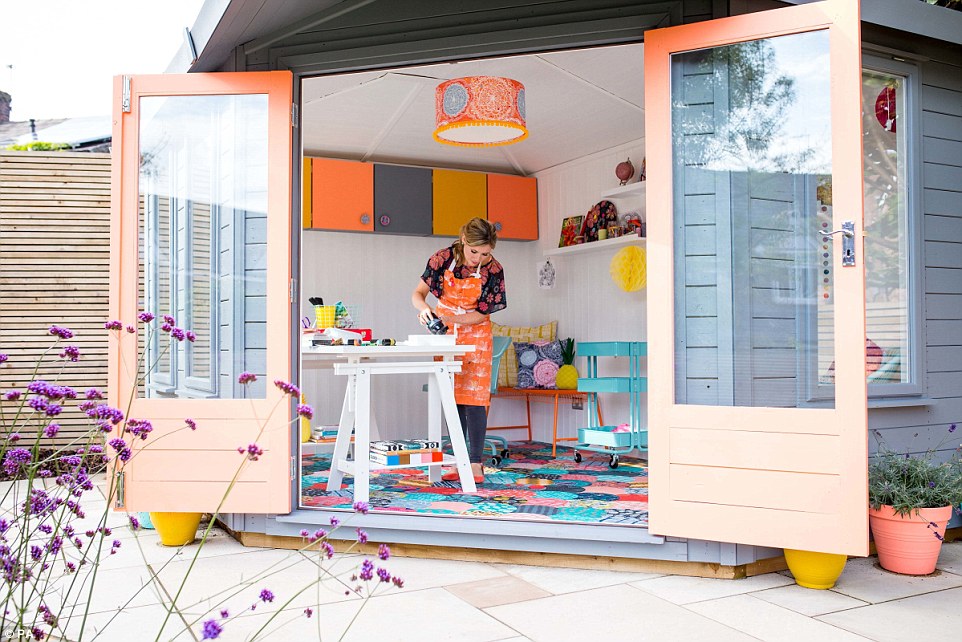 The Rainbow Daydream by print and pattern designer Rachael Taylor is an outdoor design shed-come-studio. She uses it to create designs and get inspired. She said she has really tried to make every aspect of this shed unique, from the vibrant colours used right down to the shed shape I’ve chosen 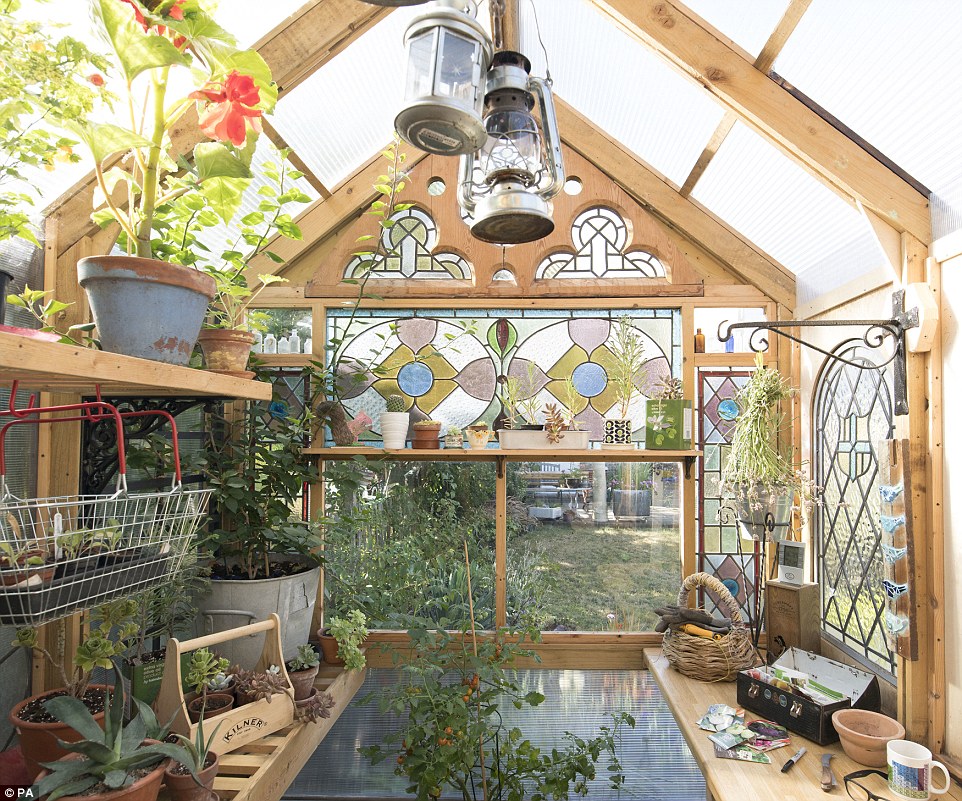 The Great Glass Propogator, owned by Andy Ramsay and Kate Spencer is a half greenhouse half summerhouse.  It is made with stained glass reclaimed from local Victorian houses and old buildings. The pair built the glazed shed without a plan and designed it for use as a potting shed and greenhouse 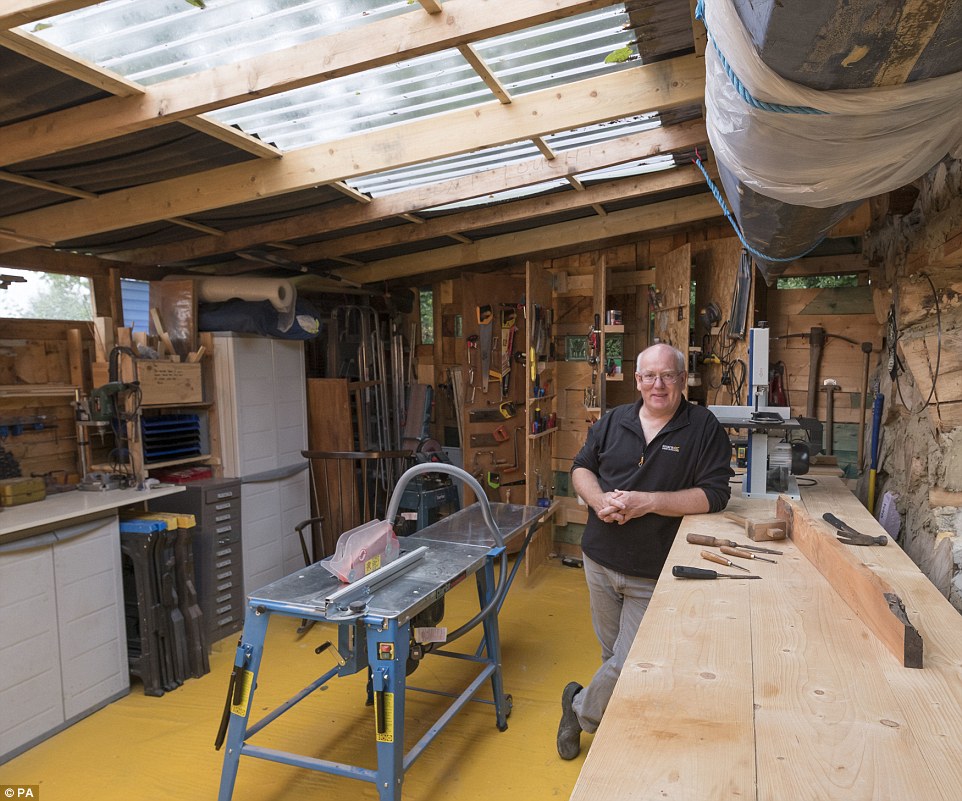 Mark Humphy’s Off-cut shed is made almost entirely from off-cuts, either cord wood for the main wall, or small sections from the off-cuts from the manufacture of roofing trusses. It also has off-cuts of stained glass, small bits of perspex and a broken microwave plate for windows. The shed has two purposes: one to store Mark’s sea kayak, and secondly as workshop where he can do carpentry etc 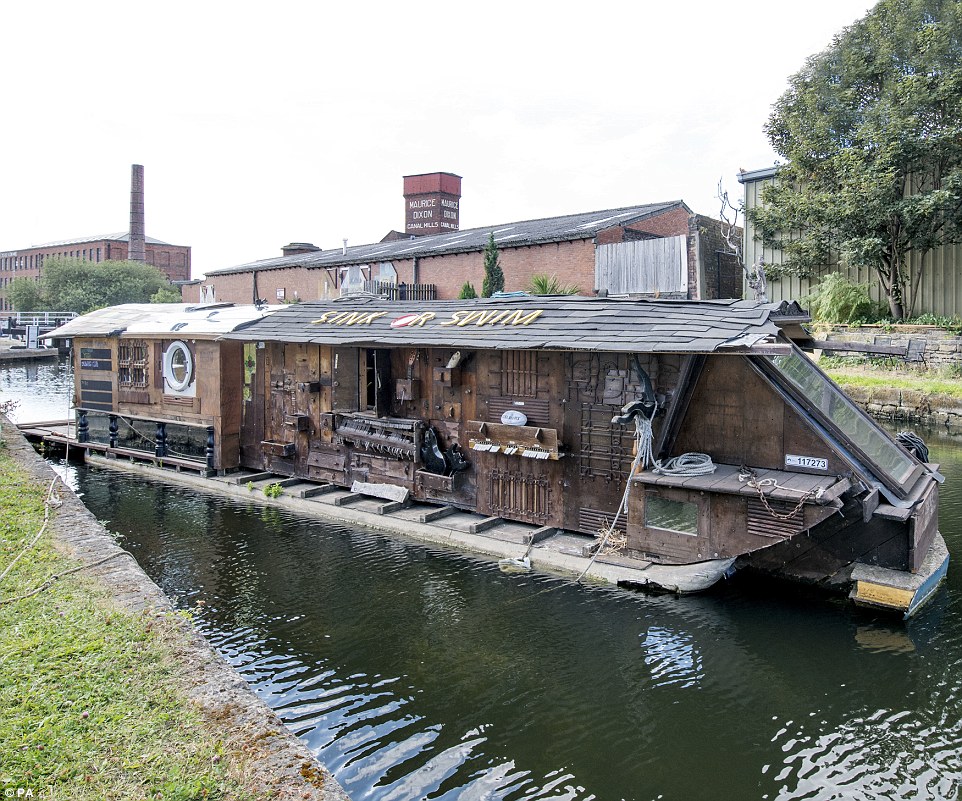 Ben Cummins has been manually pulling his shed on skis from Liverpool to Leeds over the last  five years. He built the structure from utilising reclaimed materials found along his journey. He envisages his shed to function as a floating arts platform 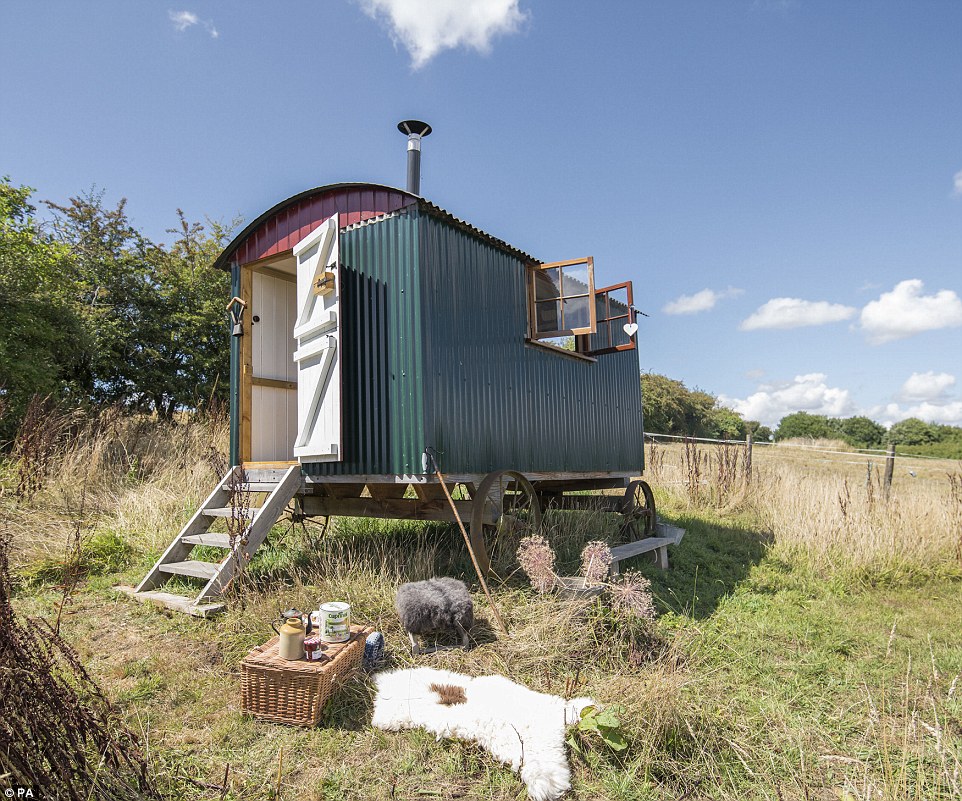 Greg WhaIe’s Shepherds Hut is based on historic shepherd hut designs. He took measurements and pictures of various local huts with permission.It is painted green on the sides and black on top and has now been fluffed up on the inside with sheep skins, rugs cushions and a wood burning stove