Paris: Three Paris police officers being held over the beating of a black music producer during an arrest a week ago will remain in custody for now, Paris prosecutor Remy Heitz said on Sunday.

Heitz told a press briefing that judicial authorities wanted to make sure that the three did not have any contact with one another and that they could not exert any pressure on witnesses.

The minutes-long beating of producer Michel Zecler was recorded on CCTV and has been widely circulated on social media, sparking an outcry in the national and foreign press and demonstrations against police violence across the country on Friday and Saturday. 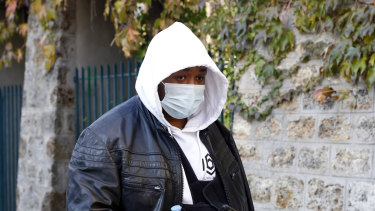 Michel Zecler on his way to the Inspectorate General of the National Police on Thursday.Credit:AP

President Emmanuel Macron said on Friday that the images were shameful for France.

Prosecutor Heitz said the officers would be charged with intentional violence with weapons, the use of racist language, falsifying police records, violation of a private home and intentional damage to a private home.

A fourth police officer, who is not accused of taking part in the beating but of throwing a tear gas grenade into Zecler's music studio, would be suspended from active service and placed under judicial control, Heitz said.

Heitz said that during a hearing by investigators, the three police officers admitted to having beaten Zecler but said they did so because they could not subdue him as he was resisting arrest and because they were panicking.

Heitz added that the officers denied using racist language against Zecler, but said that one of several young people who was in the basement studio – and who have also been heard by investigators – confirmed having heard the racist insults.

Laurent-Franck Lienard, a lawyer for the three police officers, said on BFM television that he too had been shocked by the images of the beating and said he was thinking "have they gone crazy?".

But he said that the three officers believed the arrest had been handled correctly and that force had to be used when unavoidable.

He said his clients should not remain in custody. "Preventive detention is totally hysterical," he said.

Zecler's lawyer Hafida El-Ali said on BFM "They (the police officers) are lying at every level."