Beijing: On the basketball court at lunchtime, patriotism beat out sporting loyalties in downtown Beijing on Thursday. 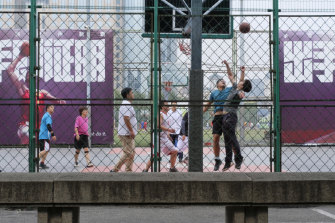 Yet players who spoke to The Sydney Morning Herald and The Age claimed they didn't care that Thursday evening's game between the Lakers and Brooklyn Nets, to be played in Shanghai, wouldn't be shown on Chinese TV – if it went ahead at all.

"I won't watch the game, won't buy its shoes and won't buy its clothing," said Luan, 37, who works in book publishing. He said he has been watching America's NBA for 20 years, "since the Michael Jordan era and I was 17".

The reason for the sudden boycott? "They should respect the dignity of our motherland."

Shooting hoops on a court surrounded by billboards for Nike that featured young Chinese NBA player Zhou Qi, a medical worker concurred: "Patriotism goes above all."

He said he followed the NBA even before Chinese superstar Yao Ming became an NBA All Star a decade ago.

The NBA commissioner Adam Silver landed in Shanghai a day earlier to try to defuse spiralling tensions and salvage two high-profile games to be played in Shanghai and Shenzhen after broadcasts and a fan event were axed.

Fourteen Chinese sponsors have pulled out, and advertising posters were pulled down on Wednesday.

Internationally, the incident has brought a wave of condemnation against China for bullying Western organisations into restricting free speech. The attempt to silence the NBA was seen as a tipping point in such behaviour, which had probably backfired as it put a spotlight on Hong Kong democracy protests among middle America's sports fans.

But adding extra heat to the controversy in China is the history of the Houston Rockets with Chinese fans: Yao Ming, now the head of the Chinese Basketball Association, forged his NBA career with the Houston Rockets. Zhou Qi, the latest young star, was drafted to the NBA by Houston in 2016 – but waived by Morey last season.

Yao Ming is yet to publicly comment on the crisis, but Silver said Yao Ming was "extremely upset" at the situation and was meeting with Silver in Shanghai, his hometown.

"I am hoping that together, Yao Ming and I can find an accommodation," Silver told media.

NBA's China business is estimated to be worth $US5 billion ($7.4 billion) annually in a market where 300 million people play basketball. There is a statue of former NBA player Stephon Marbury outside the Beijing Ducks stadium, and in 2015 he became the first Western celebrity to be offered permanent residency in China. Marbury was paid a reported $US2 million to join the Beijing Ducks in 2009.

Not all Chinese basketball fans put patriotism over team loyalties however. A 25-year-old Houston Rockets fan, Howard Wang of Jilin province, was detained by police after he appeared on social media platform Weibo this week wearing his NBA team colours and threatening to burn the Chinese flag.