Pensioner, 87, who drilled holes through his neighbour’s garden wall REFUSES to stop his campaign unless the wall is knocked down – and rebuilt two inches further back

A pensioner drilled holes in his neighbour’s garden wall claiming it encroached on his land by two inches, and erected placards accusing the family of being thieves.

Despite a £90 fine for damaging the wall with a drill, Ewen Taylor is refusing to stop his campaign until the wall is replaced to the same ‘height, depth and width as it was before’.

The 87-year-old has accused his neighbours of ‘illegal building work’ and says they should sue him if they want him to take his signs down.

The family, who built the extension to create more dining space, say the row has left their children ’embarrassed to go out’.

For several months Mr Taylor, from Cardiff, has been putting wooden placards at the front of his house in the Grangetown area.

The 87-year-old’s messages include: ‘You and your cowboy builder are thiefs [sic]’; ‘Other councils take down illegle [sic] building work’; ‘Will they sue me?’; and ‘Do not like my signs, tell the council’.

The display shows the street number of the next-door family, who said: ‘It needs to stop.’

Mr Taylor, a retired bricklayer who has lived in his house for around 50 years, said his anger was sparked in 2020 when the family built an extension in their back garden. 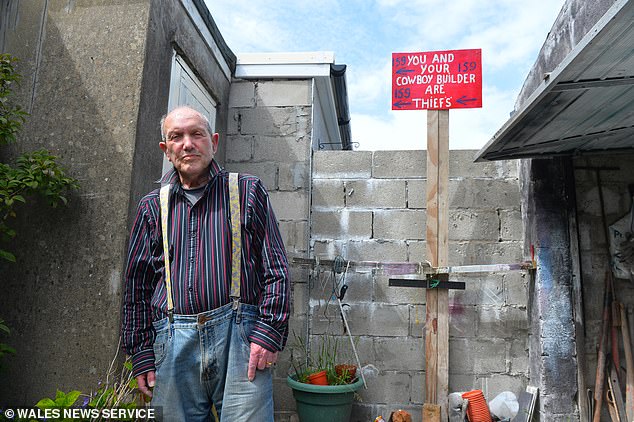 Ewen Taylor, 87, claims that his neighbours in Cardiff have rebuilt a garden wall two inches onto his land, and he has since began a campaign to have the wall demolished 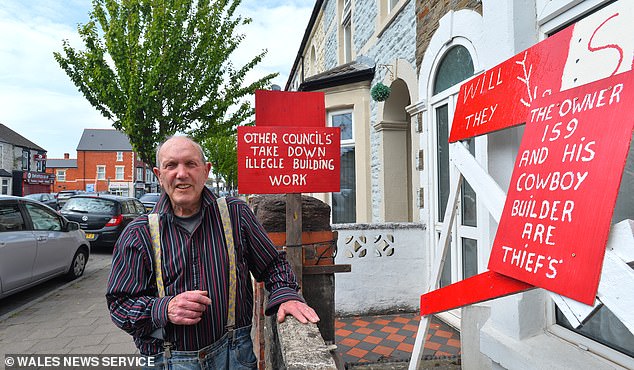 Pictured: Pensioner Ewen Taylor drilled holes in his neighbour’s garden wall and put up signs complaining that their new extension encroaches on his garden by a couple of inches 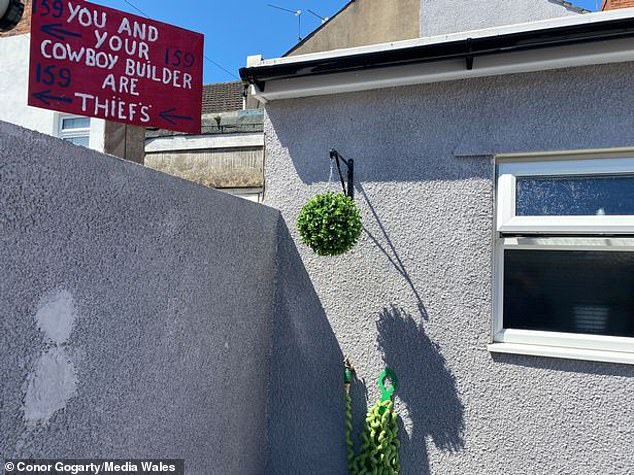 He claims the family removed the garden wall they previously shared and replaced it with a new one – which he claims juts into his own garden.

‘It’s a matter of two inches but it’s my property,’ he said. ‘Even if it was half an inch I would object.’

The neighbours – a married couple with four children aged eight to 20 – deny any encroachment.

The mother, 42, said: ‘I have no idea why he thinks it is in his property. It is distressing, especially for my children. They are embarrassed to go out when people ask questions about the signs.

‘This has been very stressful for us and very upsetting. We didn’t want to upset anybody.

‘I wish it would all be over.’

The family’s extension pushed back their bathroom to create more dining space.

Builders knocked down the old garden wall – which Mr Taylor described as ‘a random rubble wall with a cock and hen finish’ – and built a concrete replacement.

‘Since we moved in 20 years ago [Mr Taylor] hasn’t talked to us,’ said the woman. ‘We hadn’t had an argument or anything. This is the first time there’s been any confrontation. 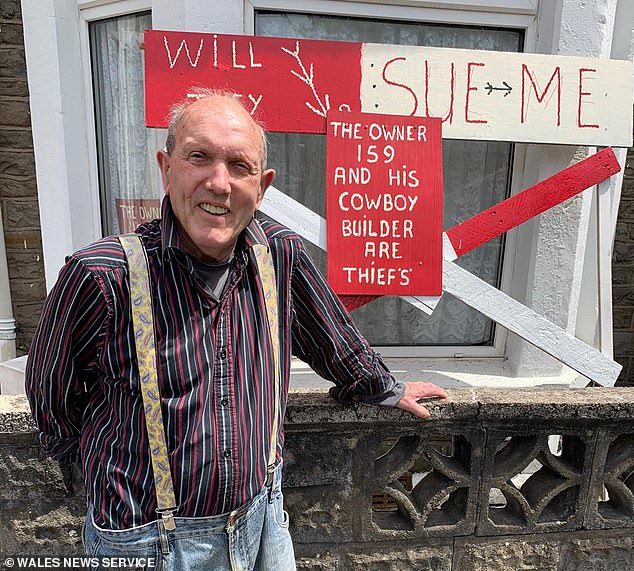 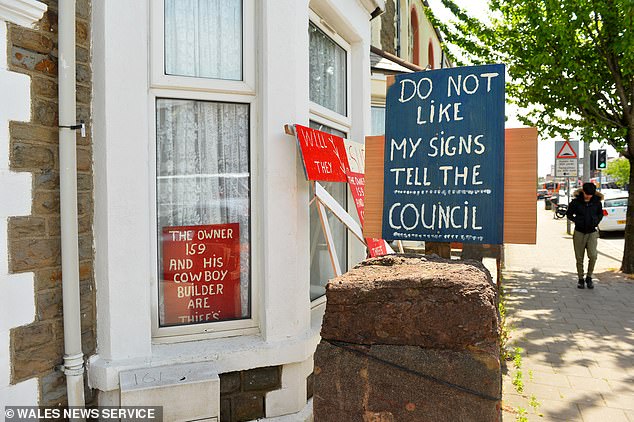 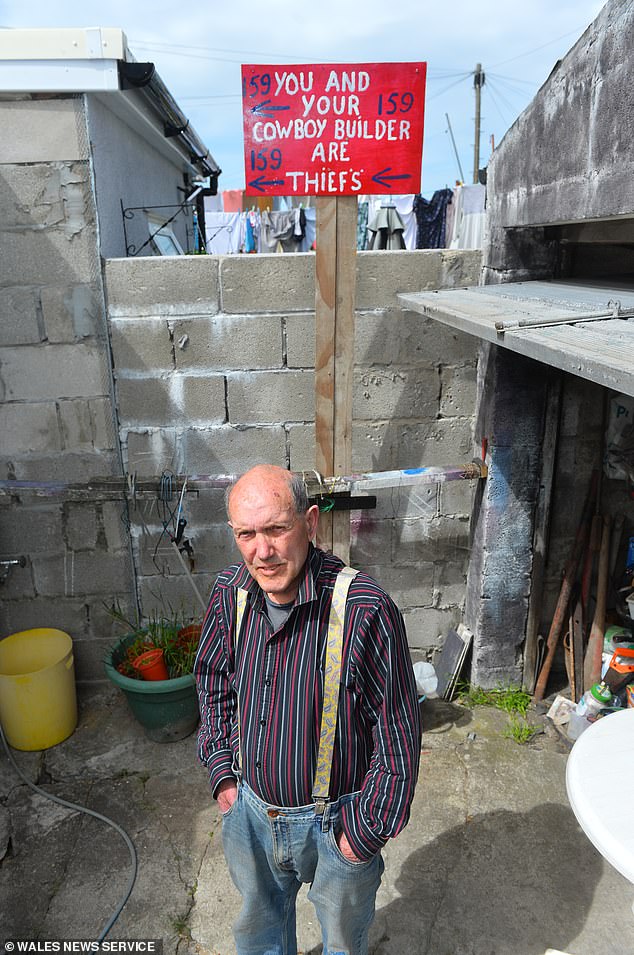 Mr Taylor won’t take down his signs until the wall is the ‘same height, depth and width as it was before’

‘Cardiff Council says there’s no need for a planning application for extensions of six metres and this was within six metres. Then after the work was finished [Mr Taylor] drilled straight through.’

Mr Taylor accepts he used a drill and hammer to make holes in the wall over a period of around five months. He also peeled off a strip of stucco from the building extension. Four circles in the garden wall show where the family have sealed up damage.

‘He would often do it in the mornings when we were out,’ the mother continued.

‘One time when we were in, he started doing it and we asked why. He said: ‘It is in my property.’ 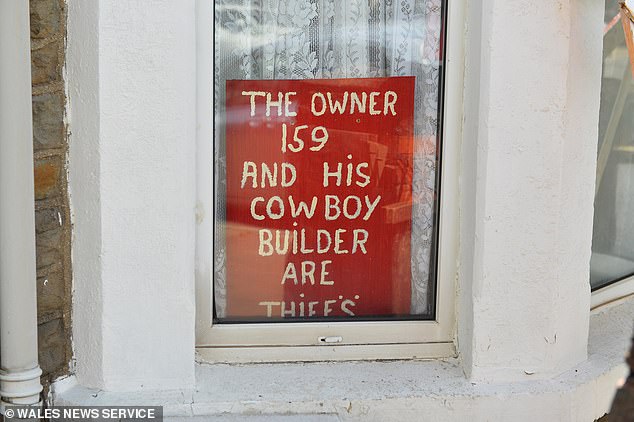 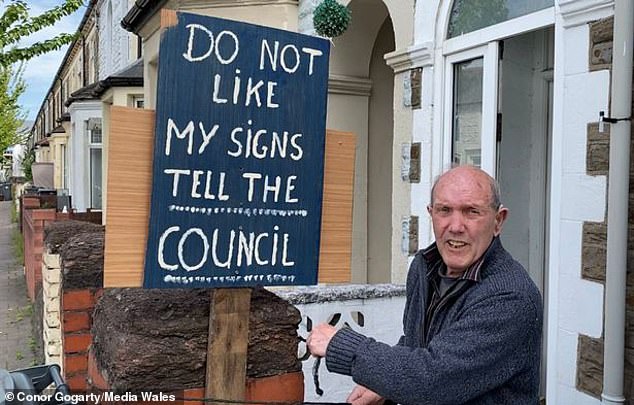 Pictured: Mr Taylor has a collection of signs accusing his neighbours of illegal building work 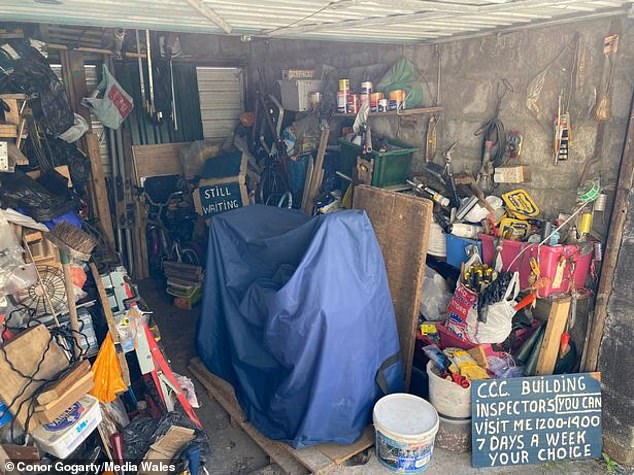 ‘It was intimidating for my children.’

Mr Taylor said he had lived in the house for around 55 years after buying it for just £2,300 with his wife Margaret.

In response Mr Taylor said: ‘I don’t see how it was intimidating. Hammering and drilling has been going on next door for years. And that’s acceptable.

‘She passed away quite a few years ago.’

The woman said: ‘The police took away his drill. That’s when he started with the signs. We called the police two weeks ago and they said they can’t do anything because it’s in his private property.

‘They said it is like a protest sign even though it’s got our house number and he’s calling us thieves. How can that not be offensive?’ 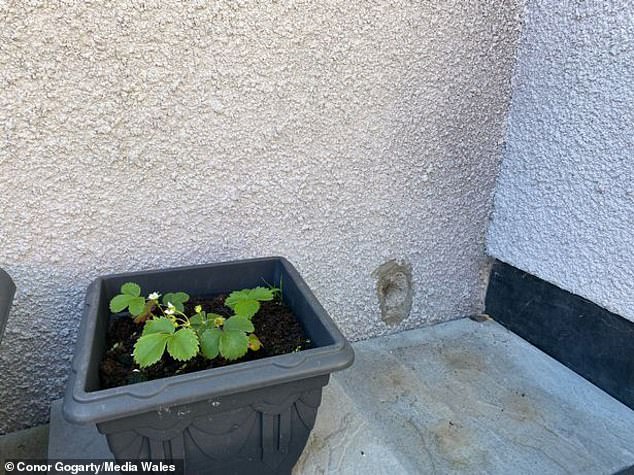 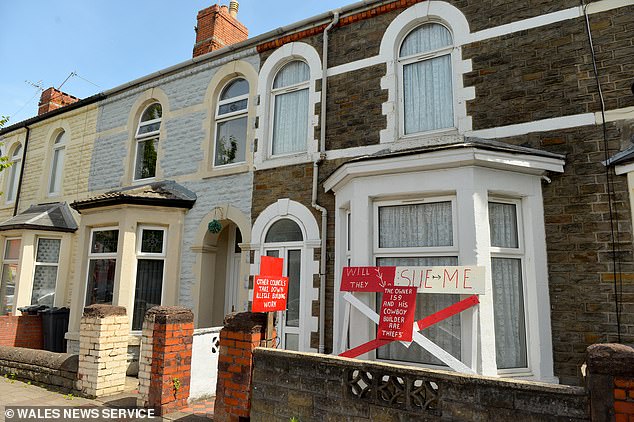 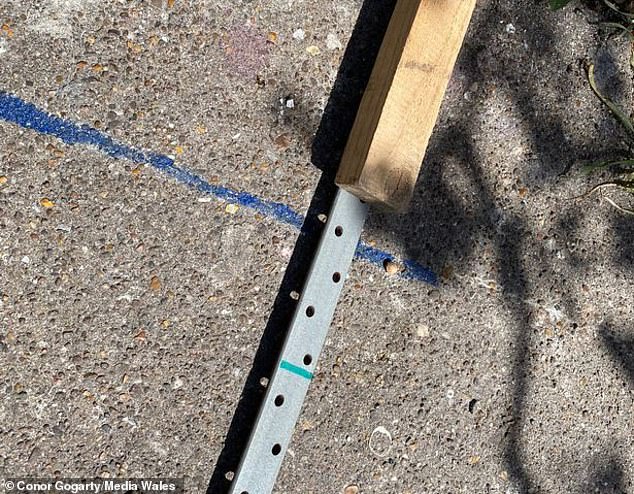 The pensioner felt he was left with ‘no other choice’ but to drill holes after the council refused to intervene.

One council officer wrote to Mr Taylor that the extension did not need planning permission and that boundary disputes a civil matter and not for the council.

Mr Taylor said he launched his protest because he cannot afford civil action. ‘I am protesting that they have encroached on my property to extend their property, devaluing my property. I am a victim and I am penalised?’

When asked if he tried to speak with his neighbours about his concerns he said: ‘Oh no. How do you talk to someone and tell them what they have done is illegal?

‘As far as I am concerned it is an issue for the council.

‘I keep sending them letters and I have sent them photos and videos over the last two years but not heard back.

‘The council are a law unto themselves. If you want something done you have to do it yourself. I’ve not got the money to pay a lawyer but the council should do it.’

When Mr Taylor was informed that the family feel harassed by the placards he said: ‘My signs are the truth. A couple of days ago the law [police] were here.

‘They told me the signs are not very nice and that other people object to them. But I wasn’t asked to take them down because they don’t have the power. It’s on my property.’ 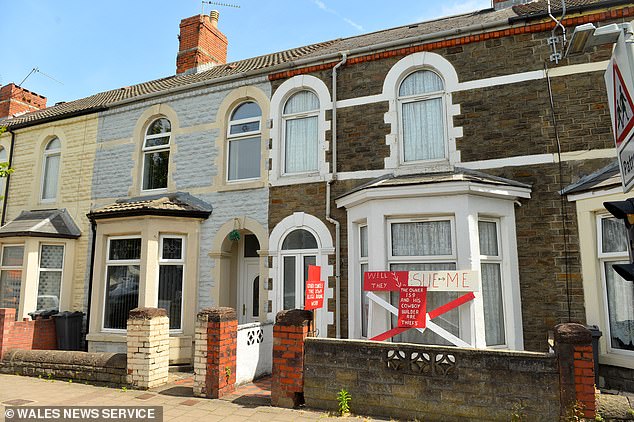 Mr Taylor said he wants the rear wall to be replaced at the same depth, width and height

The family said police have advised them they could launch civil proceedings over the display but they decided against it to avoid legal costs.

The grandfather of four said: ‘Why won’t they sue me? Because they know they’re in the wrong.

‘I won’t take my signs down until the boundary wall is replaced to the same height, depth and width as it was before.’

A council spokesman said it was a civil matter between two parties, adding: ‘We could only get involved if the signs were on the highway, causing an obstruction, or have been put up without permission, so in effect flyposting, which is an offence under the Environmental Protection Act 1990.’