Naked sunbathing, city street brawls and hippie festivals: Photographer Bob Mazzer captures everyday British folk in all their glory from the 1970s to the present day

A new book by renowned photographer Bob Mazzer highlights the day-to-day characters of Britain from the 1970s to the present day in all their glory.

The new self-titled collection by the ex-Time Out photographer brings together snapshots taken throughout the country since the 70s, during his happy hippie phase in Wales, as well as a stint capturing the local faces in Hastings and St Leonards in East Sussex.

Candid shots of the streets of London also feature, as do timeless still of the London Underground, his signature work.

By turns sexy, funny, sad and scary, the many brawls documented in London’s streets suggest past decades weren’t as genteel as some would have us believe.

For most people the 1970s are a period synonymous with a poor economy, high inflation, employment struggles and strikes, typified by the Winter of Discontent.

The 1980s, on the other hand, are seen as the decade of glamour and razzmatazz, gigantic hair and shoulder-pads, the Filofax and the home computer and, most memorably, the decade of Margaret Thatcher and the decline of the unions and the miners strike.

The 90s saw the explosion of Britpop, the Spice Girls, Friends and the internet, book-ended with Tony Blair’s 1997 election victory and Mr Mazzer’s photo chart the changing face of the nation.

Kids trick or treating, sunburned holidaymakers, young men flirting with attractive ladies, students spacing out on the grass, Mazzer’s images are an insightful document into everyday life in this country during a period of radical social change. The book will be released by Unicorn publishers this month, and features a foreword by friend Will Self. 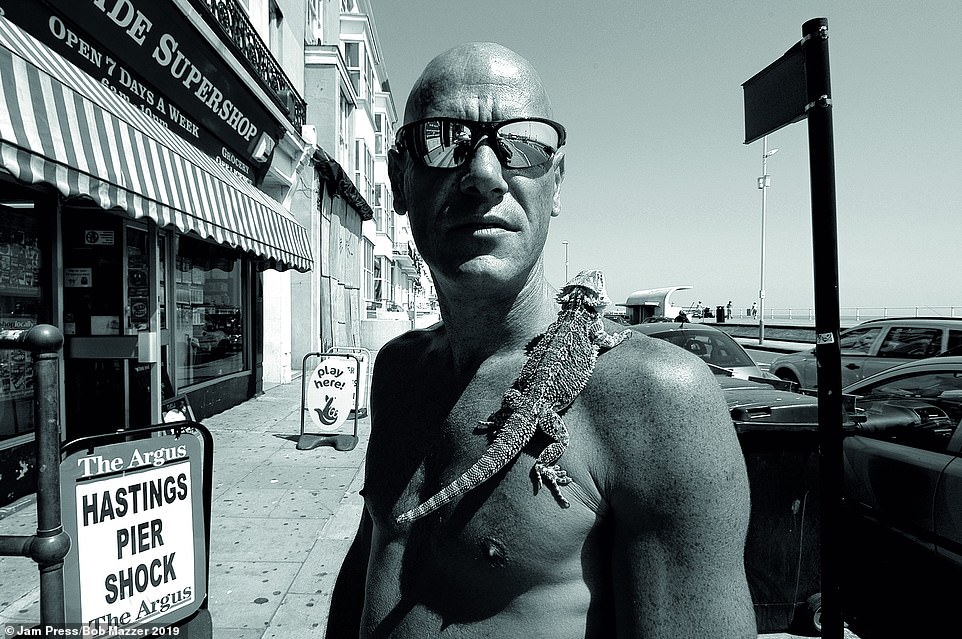 A man pictured enjoying the sunny weather with a bearded dragon climbing his chest in this photo from 2006 near Warrior Square in Saint Leonards-on-Sea, Hastings in East Sussex. The photo forms part of a collection showcasing everyday British folks from the 1970s to the present day 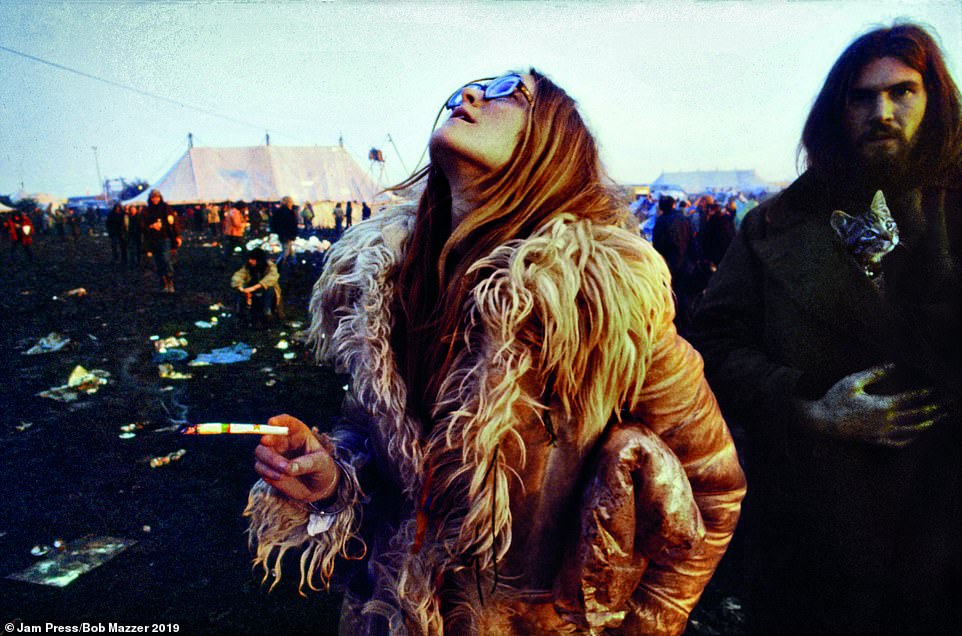 A photo Geof and Georgie with their adorable pet cat Puss. Mr Mazzer says that the photo was taken at the Bickershaw Festival, near Wigan in 1972. It rained for three days during the festival, though the throngs of people suggest that didn’t deter many of the attendees 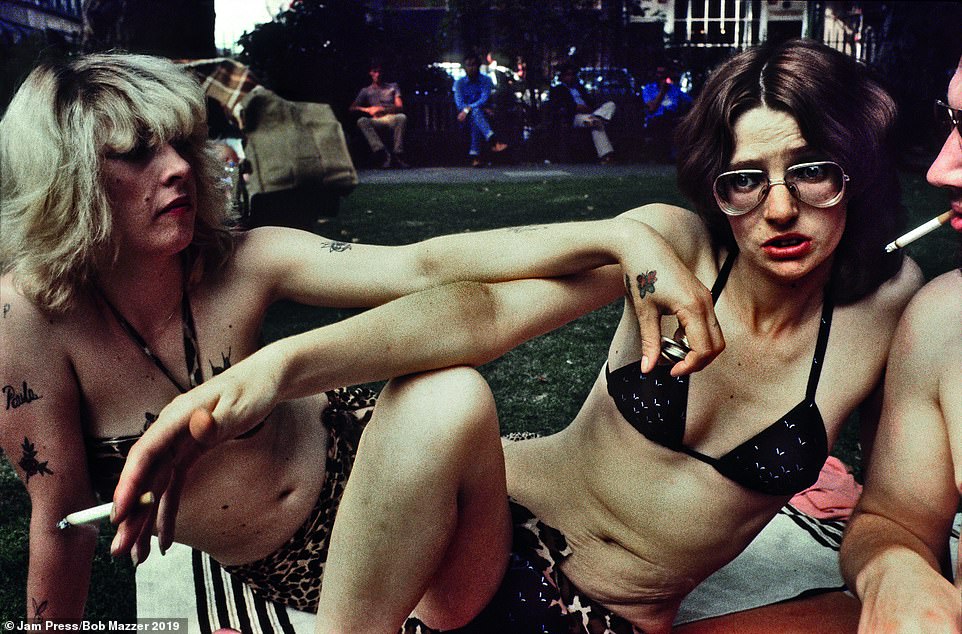 Friends in Soho Square in the 1970s. Mr Mazzer said: For a long time I thought that I’d only taken one shot of these seemingly conjoined persons, but while looking for pics for this book I came across several of this little group showing that I had snuck up on them from behind, then having got their approval, sat down with them. Although I doubt whether I had much to offer conversationally I now remember that they were completely unfazed by my snapping away, and that they were also very sweet and friendly’ 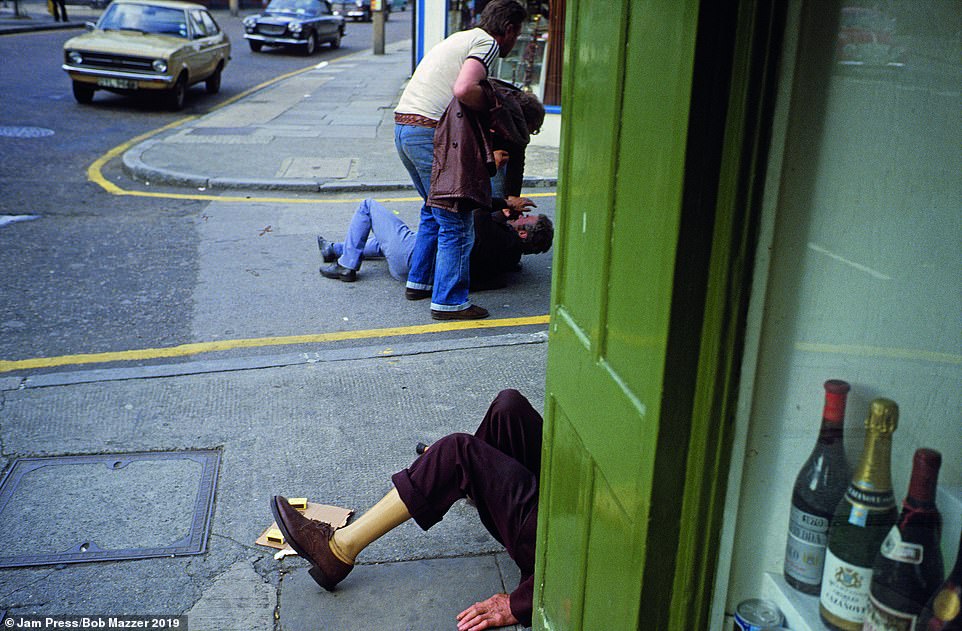 The aftermath of what appears to be a street brawl in King’s Cross, London in the 1980s. The many brawls documented in London’s streets suggest past decades weren’t as genteel as some would have us believe, says photographer Bob Mazzer in his new book 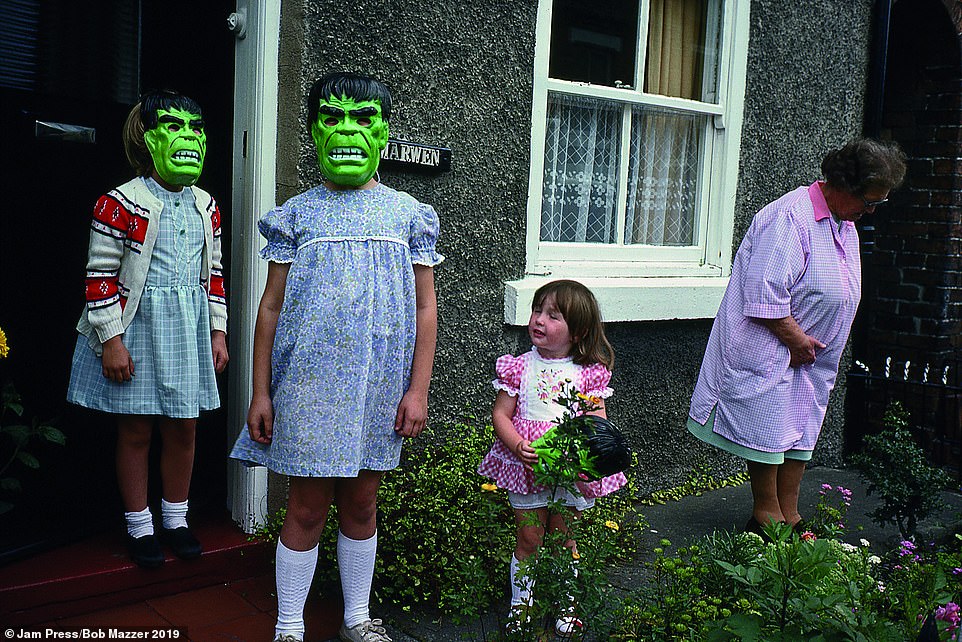 Pictured is a family in Llansantffraid-ym-Mechain, Powys, in Wales in the mid 1970s. The three girls all seem to be fans of the Incredible Hulk, sporting his mask as they pose for the camera – though the youngest seems to be confused by the whole situation 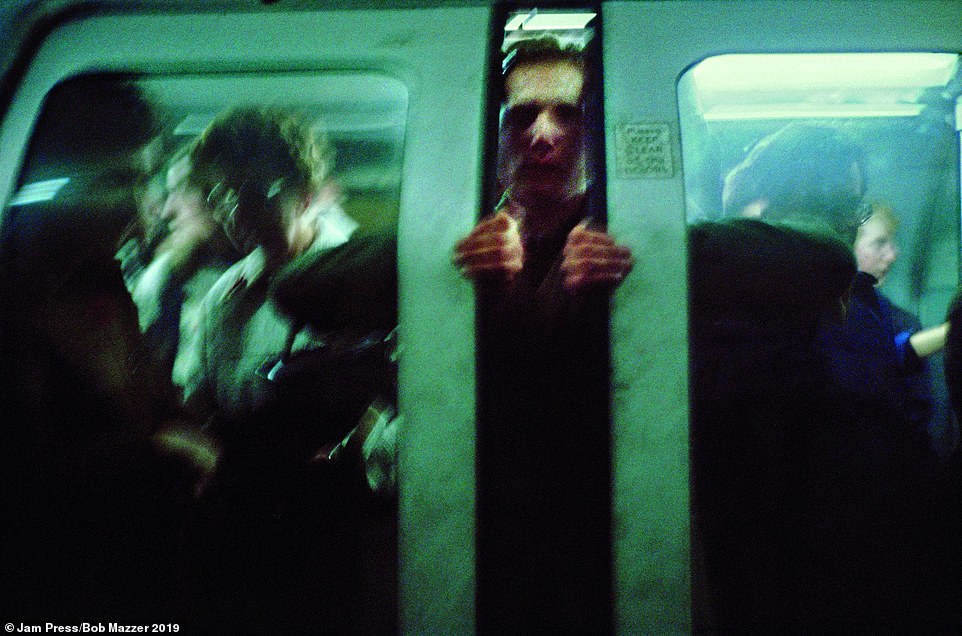 This picture shows a man trying to stop the doors of the London Tube from closing in the 1980s. The snap is titled ‘Obstructing the doors’. Mr Mazzer said: ‘The DJ John Peel was always wryly amused whenever he saw that little sign saying ”Obstructing the doors can be dangerous”’ 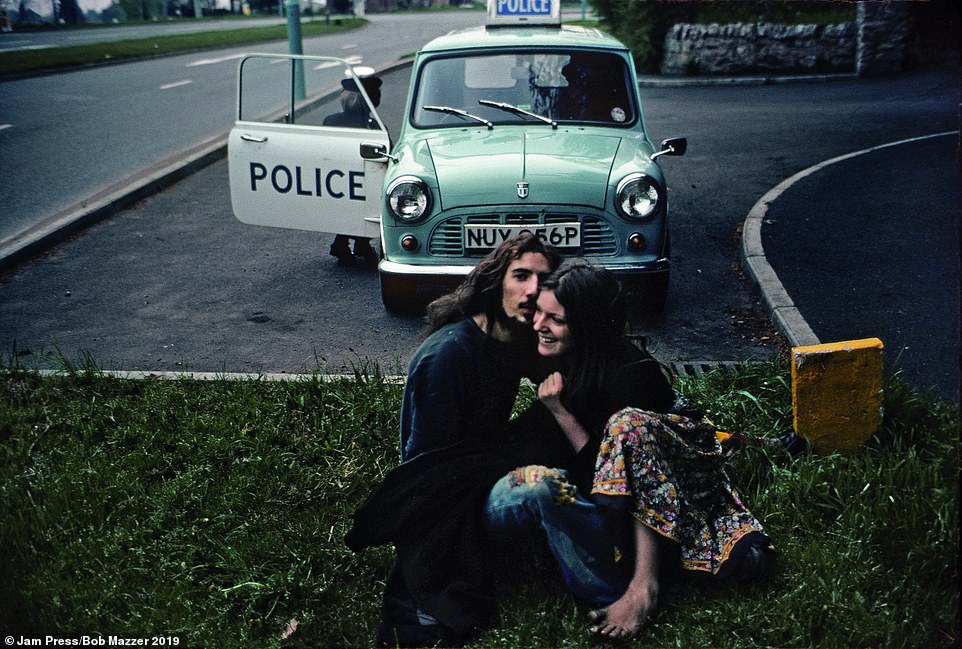 In this photo, a happy hippy couple pose on some grass in front of a police car in Shrewsbury – though Mr Mazzer isn’t sure if the police car was present for them. He said: ‘I was hitchhiking between London & Wales when I came across this happy couple.I suppose it’s possible that the Mini Police car was just parked up, & these two were just sitting on the grass. Everyone seemed content, so I took a couple of snaps, no one minded’ 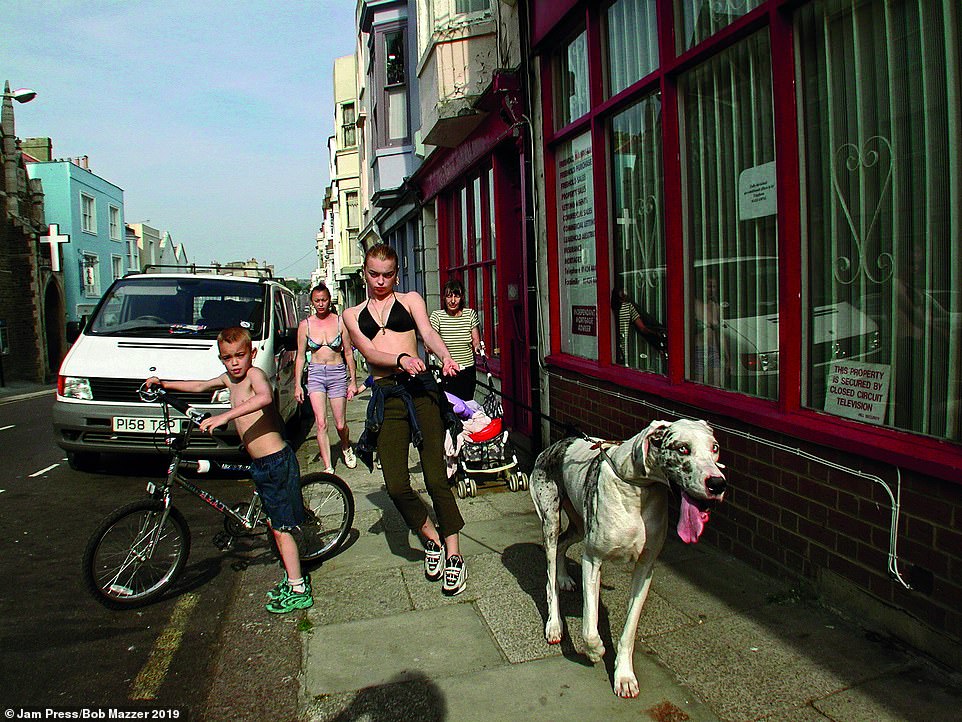 A young family pictured in 2001 in St Leonards-On-Sea. The girl in the middle sports her most fierce expression as she clings onto a happy dog making its way down the street, while the rest of her family peer into the camera on what is clearly a warm summer’s day 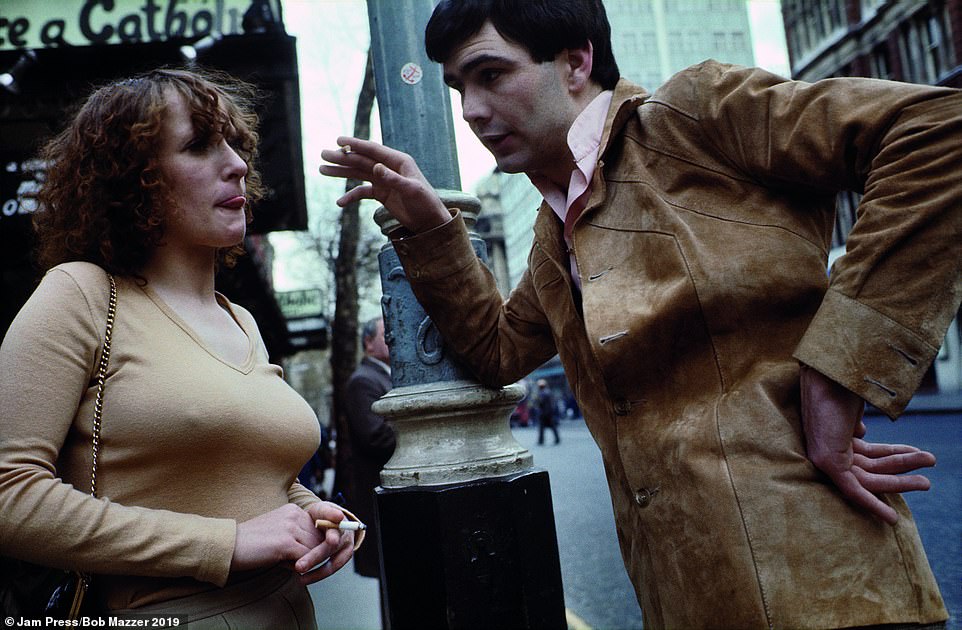 A young man and a young woman, both clutching a cigarette, have a conversation on Charing Cross Road, with the man, dressed in brown leather, appearing to be flirting with the woman. Mr Mazzer said: ‘My feeling at the time was that this was a business meeting’ 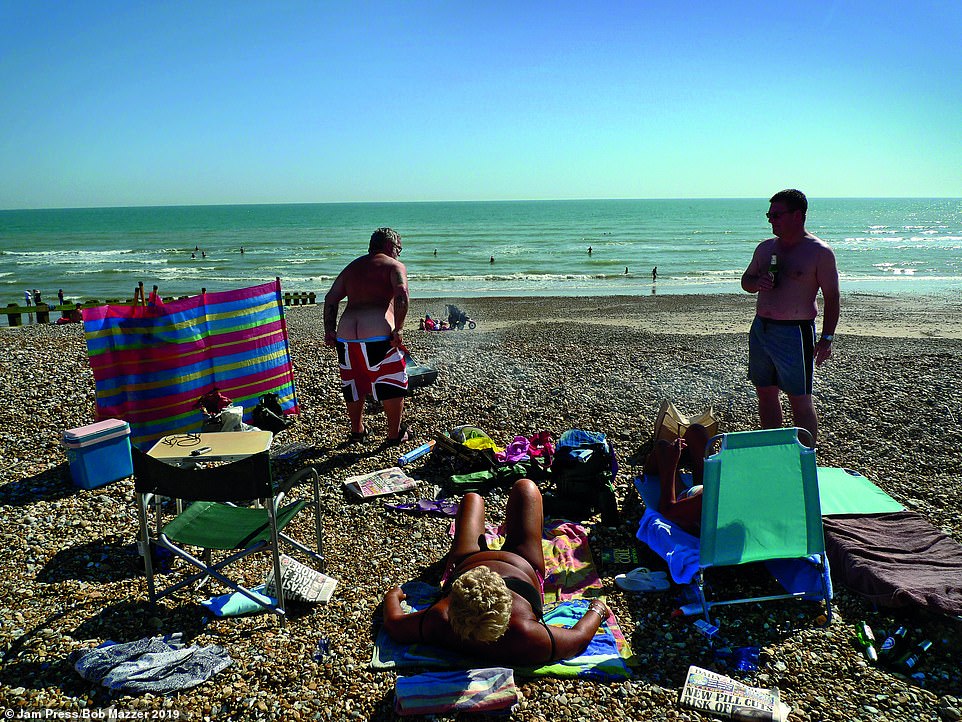 This photo, captioned simply ‘Inevitable’, was taken in 2009 on St Leonards beach. Mr Mazzer captured the exact moment a man attempted to cover his behind with Union Jack trunks, while his companion looked on and another woman bathed in the warm summer sun 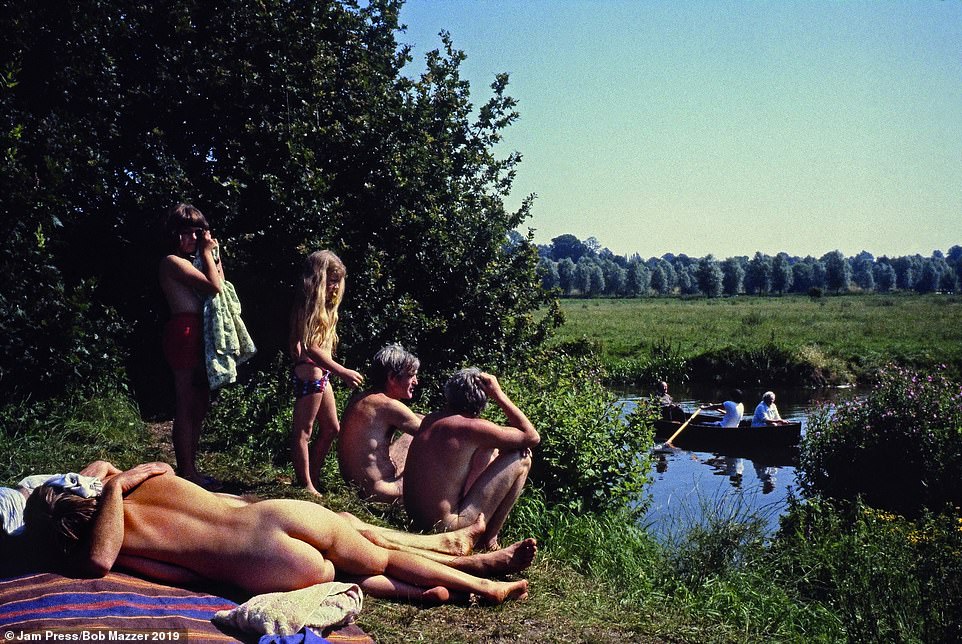 A young family take in the summer sun as they sit in the grass. Meanwhile, a naked couple, named Pete and Di, lay lovingly entwined in the grass behind them while innocent boaters row in the sunshine at a music festival somewhere in Norfolk in the 1980s 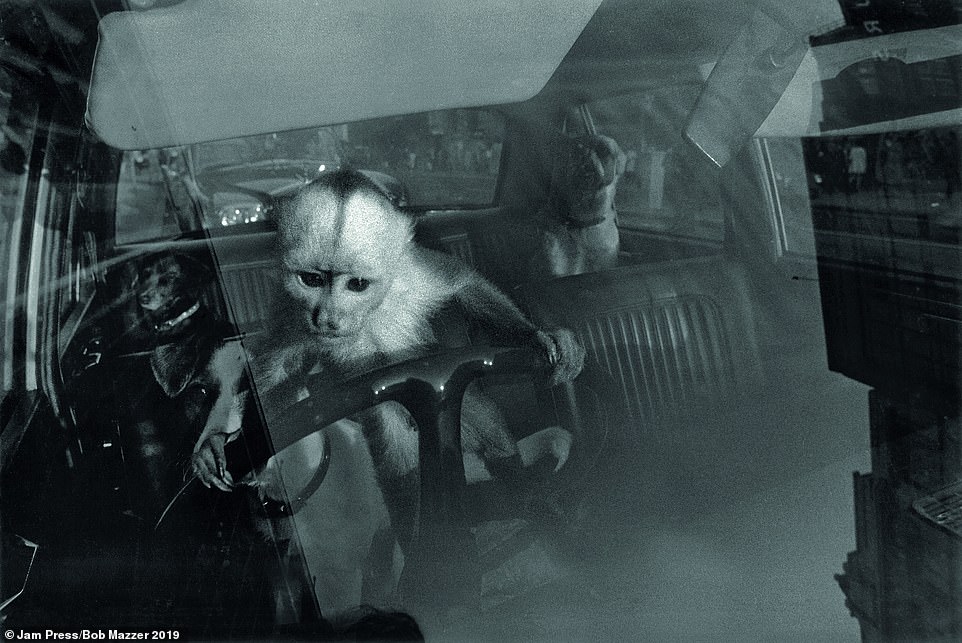 This bizarre photo was taken outside of Selfridges, on Oxford Street in London in the 1970s. A monkey is in the driver’s seat, while dogs sit in the back watching him. Mr Mazzer jokes in his book:’ As I recall, this monkey was chauffeuring three dogs around in a Daimler’ 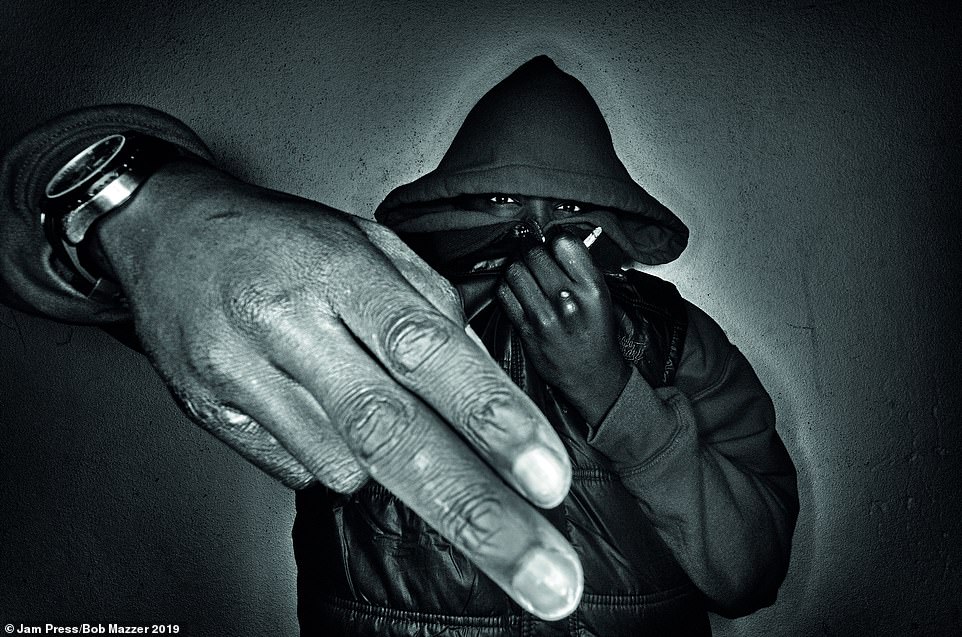 A more recent photo, this picture shows a man named Muhummed at the Respond Academy in Hastings. The academy is a youth project based in Hastings & St Leonards and says that it caters for young people who are interested in arts, music, crafts 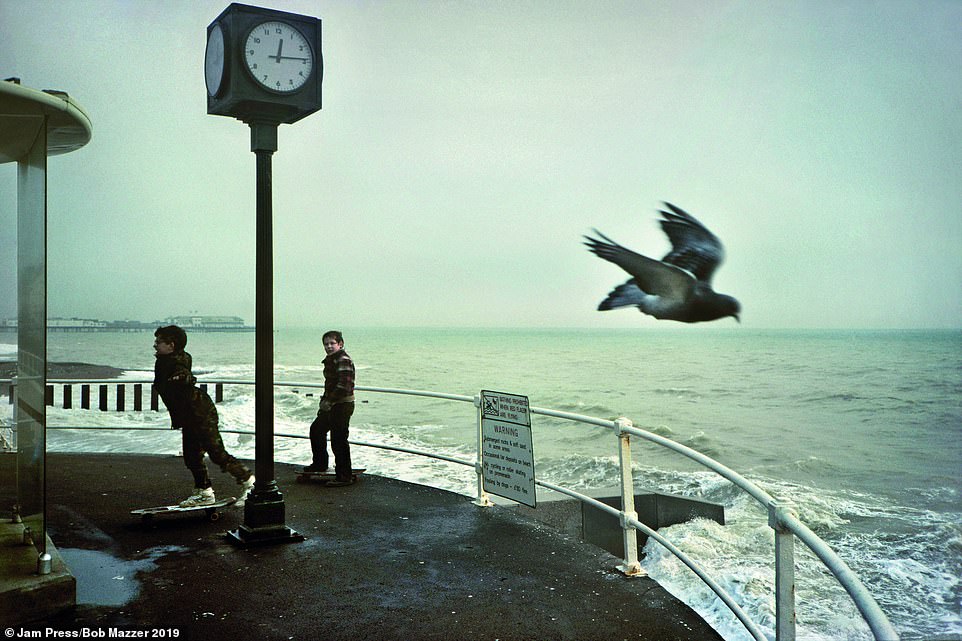 St Leonards sea front, 1989. Mr Mazzer said: ‘Nearly everything in this photo is gone now; the pier, the modernist shelter, the curve of the prom and railing, the pilings on the beach, the boys and skateboards, and the pigeon has flown the coop. All that remains is the clock on a pedestal at nearly a quarter past twelve’ 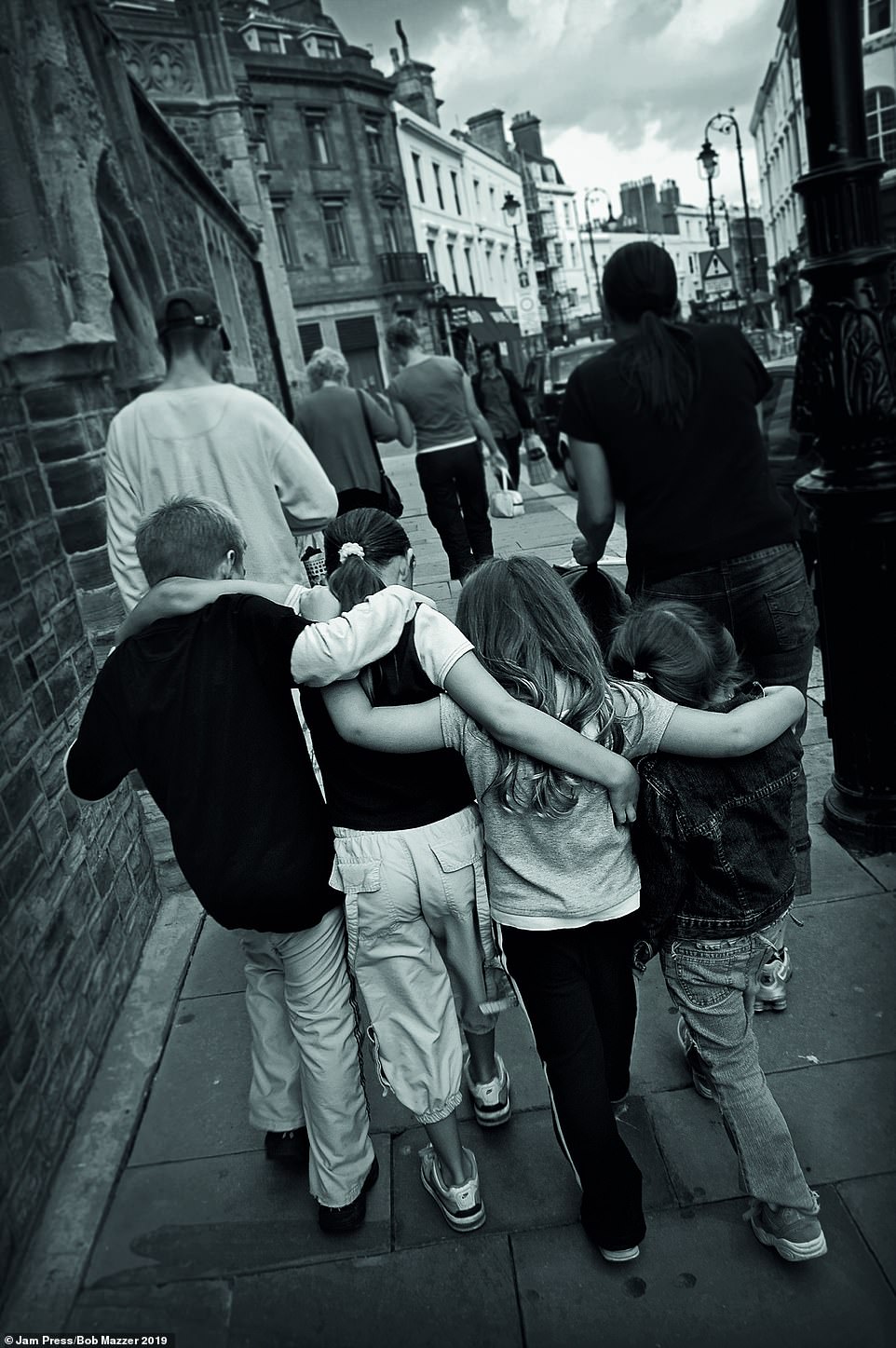 This photo shows a young family on Robertson Street in London, the children clinging to each other in an adorable display of affection as they walk down the street together, while passers-by go about their day on a cloudy day