Government plans to let 2.2million workers ask to work from home from DAY ONE of their new job – but firms will be allowed to say no if it could damage their business

More than two million workers would be allowed to ask their bosses to let them work from home from day one of a new job under plans unveiled by ministers today.

The plan would ease the current rules that allow staff to request flexible working once they have been in a role for six months.

It has been launched after millions of people worked form home during the Covid pandemic, with many firms deciding to keep some measures in place permanently.

Ministers plan to keep in place rules that allow businesses to refuse the requests if they have ‘good business reasons’ to do so.

But they want to place pressure on employers to negotiate with their staff rather than reject requests outright.

However it is a watered down version of the move in the Tory 2019 manifesto which pledged to make flexible working the ‘default’ rather than something that has to be asked for. 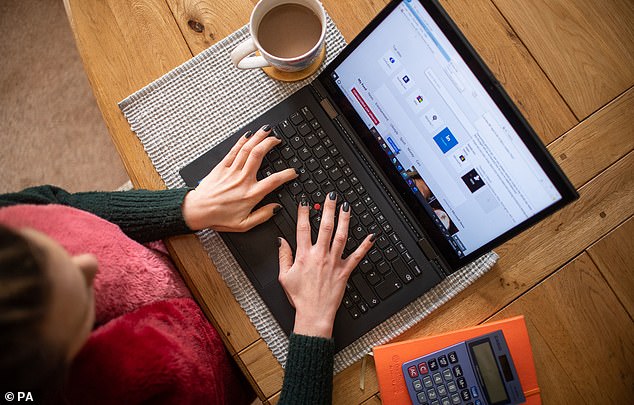 It has been launched after millions of people worked form home during the Covid pandemic, with many firms deciding to keep some measures in place permanently. 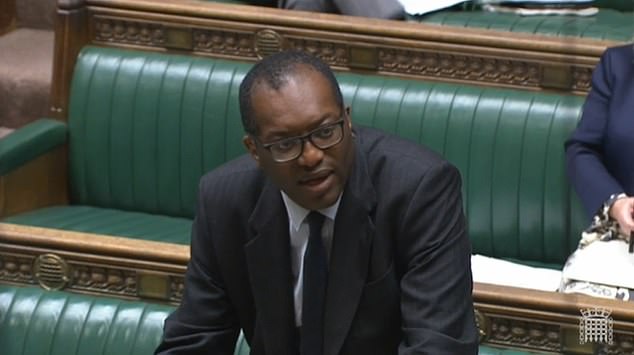 Business Secretary Kwasi Kwarteng said: ‘Empowering workers to have more say over where and when they work makes for more productive businesses and happier employees.

Business Secretary Kwasi Kwarteng said: ‘Empowering workers to have more say over where and when they work makes for more productive businesses and happier employees.

‘It was once considered a ”nice to have”, but by making requests a day-one right, we’re making flexible working part of the DNA of businesses across the country.

‘A more engaged and productive workforce, a higher calibre of applicants and better retention rates – the business case for flexible working is compelling.’

The Government said a range of flexible working methods will also be looked at, including job-sharing, flexitime, compressed hours and phased retirement, as well as working from home, a trend which has accelerated as a result of the pandemic.

A day-one right to a week’s unpaid leave for carers balancing a job with caring responsibilities is also being planned.

Ministers said there were some circumstances where businesses will not be able to offer flexible working, so they should still be able to reject a request if they have sound business reasons.

Minister for Women and Equalities Liz Truss said: ‘As we move beyond the pandemic, we must seize the opportunity to make flexible working an option for everyone.

‘No-one should be held back in their career because of where they live, what house they can afford, or their responsibility to family.

‘I want everyone to have the same opportunities regardless of the background or location. This is the right thing to do for workers, families and our economy.’

‘But under these plans employers will still have free rein to turn down all or any requests for flexible working.

‘Instead of tinkering around the edges, ministers should change the law so that workers have the legal right to work flexibly from the first day in the job. The right to ask nicely is no right at all.

‘All job adverts should make clear what kind of flexibility is available.’ 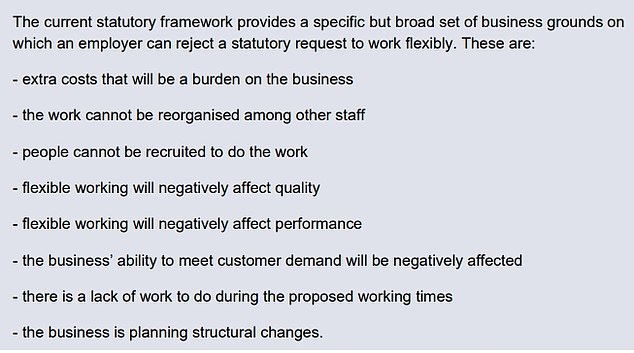 Matthew Fell, CBI chief policy director, added: ‘Businesses have learnt a huge amount about the pros and cons of flexible working during the pandemic, with many firms expecting to receive more formal and informal requests in the future.

‘Employers support giving employees the right to request flexible working from day one in the job.

‘Companies want to work with the Government to ensure that they can say ‘no’ when they have properly considered requests but for good reason can’t accept them,’ he added.

Baroness Kishwer Falkner, who chairs the Equality and Human Rights Commission said: ‘We have long been highlighting the benefits of flexible working – from unlocking career opportunities for women, carers and disabled people, to helping employers attract and retain a more diverse workforce.

‘Its benefits are clear, and the pandemic has proved that different forms of flexible working can work in practice to benefit both employer and employee.

‘The Government’s consultation is a welcome first step towards flexible working becoming a default day one right, where possible.’