Protesters have once again converged on the streets of Melbourne; this time rallying against a vaccine mandate for all authorised workers as well as COVID-19 lockdowns.

Police were out in significant numbers in the CBD on Saturday morning as demonstrators awaited confirmation of a location to meet via an encrypted messaging app. 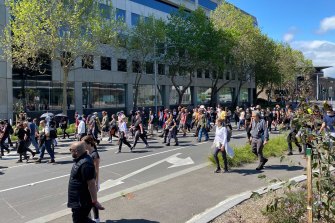 Protesters heading to Southbank in Melbourne on Saturday. Credit:Chris Hopkins

The location – an area around the Shrine of Remembrance where police dispersed protesters last week using tear gas and non-lethal rounds – dropped about 12.15pm.

Demonstrators moved around the Royal Botanic Gardens, with about 150 later marching down the Tan Track by the river, chanting “my body, my choice”, and “f— Dan Andrews” among other things.

Police choppers were overhead, as hundreds of officers on foot and horseback charged the crowd from behind just before 2pm. The Age witnessed at least a dozen people being arrested. 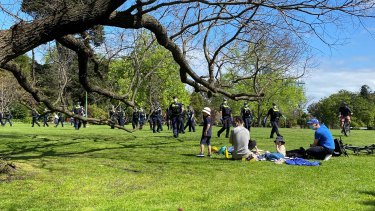 Some families were picnicking as police converged on protesters around them.Credit:Chris Hopkins

Premier Daniel Andrews on Friday announced all authorised workers would have to be vaccinated with at least one dose of a COVID-19 jab by October 15 to continue attending their work sites. They would have to receive their second doses by November 26.

There was major protest action in Melbourne last week, too, as the Premier announced a two-week shutdown of the construction industry.

Before the announcement on Monday, September 20, violent scenes broke out when a group of construction workers and others angry about a range of issues including vaccination mandates clashed with CFMEU officials at their Elizabeth Street offices in the CBD.

The following day a large, rolling protest swept across the city, with protesters bringing traffic on the West Gate Freeway to a standstill for an extended period.

Later the same week, hundreds of protesters occupied Melbourne’s Shrine of Remembrance where there were violent scenes as police cleared the crowd and arrested more than 200 people.

This week, though, attempts at protests have been quelled by police.

On Monday a small gathering held anti-vaccination signs in North Fitzroy’s Edinburgh Gardens, watched by dozens of police, but the group swiftly dispersed.

Truck drivers planned on Tuesday to cause a major disturbance on the city’s roads, travelling at 20km/h in a convoy from Port Melbourne to the Tullamarine Airport. They were thwarted when bus-loads of police turned up at the port about 5am.

Officers ended up intercepting eight trucks on the Tullamarine Freeway later on Tuesday morning and issuing penalty notices of more than $1800 to 15 people for breaching the Chief Health Officer’s directions.

On Friday, three people were arrested for failing to state their names, and police issued penalty notices to 121 people for breaching the Chief Health Officer’s directions.

Victoria Police warned they would “continue to have a highly visible presence to maintain public safety, and to ensure any protest activity that breaches the CHO directions does not impact on the broader community’s right to go about their daily lives”.

Mr Andrews announced on Friday that the construction sector would reopen next week.

On Saturday, Treasurer Tim Pallas announced the state would fund $196.6 million in grants for 70,000 eligible construction businesses affected by the two-week shutdown.