Former Tory leader Iain Duncan Smith has been told by police he must have an escort when he votes in the General Election.

It comes after his office was vandalised and he received vile online abuse warning him: ‘Worse than this is coming.’

Mr Duncan Smith said detectives investigating the attack in his constituency have insisted that an officer accompanies him to the polling station on December 12. 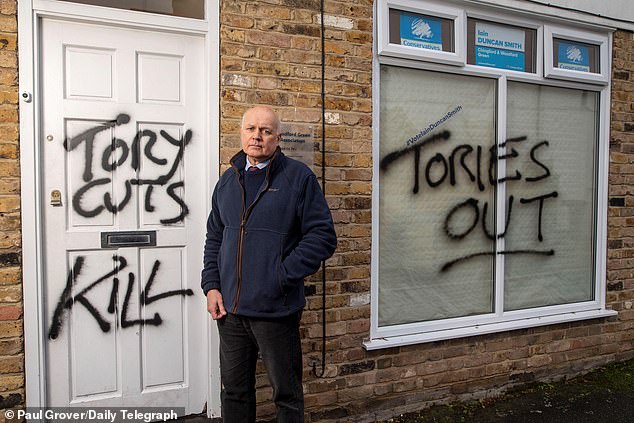 Iain Duncan Smith, pictured outside his constituency office in Chingford, Essex claimed the 2019 General Election is the most nasty in his experience. He accused Momentum activists from across London of arriving in his constituency and ‘trying to frighten people’

In the early hours of Monday, a thug daubed graffiti on his office door and window saying ‘Tory cuts kill’ and ‘Tories Out’. CCTV images of a man police want to speak to shows him parking his bicycle just yards from Mr Duncan Smith’s constituency office in Chingford, east London.

Wearing black shoes, a dark tracksuit top with the hood pulled down and a baseball cap underneath, the footage shows him arriving at 12.26am. The man walks towards Mr Duncan Smith’s office, and then rides off three minutes later.

After publicising the incident on his Facebook page, the Tory MP received a torrent of abuse.

One user wrote: ‘Corbyn did promise a dirty campaign, he is delivering.’ The message was accompanied by a laughing emoji. Another said: ‘Seems perfectly acceptable to me. Also acceptable would be lining you up against a wall in front of a firing squad.’

A third user said ‘they should have used petrol’, and another wrote: ‘Great work, comrades.’

It comes amid an increase in hard-Left activists – including members of pro-Corbyn group Momentum – visiting the Chingford and Woodford Green constituency to campaign for Labour’s Faiza Shaheen. 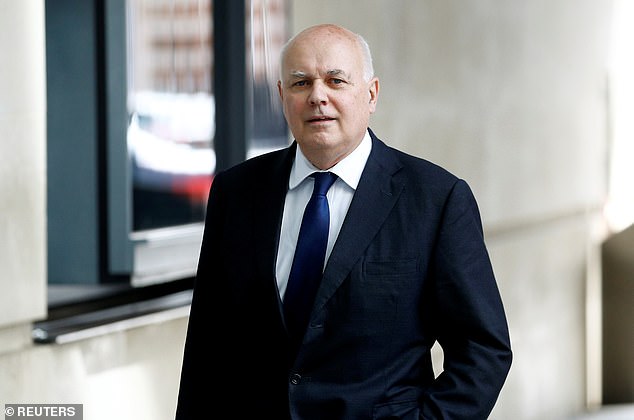 Mr Duncan-Smith, pictured said Momentum activists were arriving from neighbouring London boroughs such as Hackney into his constituency. He said: They are trying to frighten decent people. This is the nastiest General Election campaign I have seen in my more than 20 years here’

Dr Shaheen defended Labour leader Jeremy Corbyn after he visited the grave of terrorists behind the murder of 11 Israeli athletes and said ‘it’s not a fact’ that the killings were an anti-Semitism issue. She later apologised.

Mr Duncan Smith, who has held the seat since 1997, said the Momentum activists often came in from neighbouring London boroughs such as Hackney. He said: ‘They are just trying to frighten decent people. This is the nastiest General Election campaign I have seen in my more than 20 years here.

‘They are just desperate now because Corbyn is disliked – which comes up on the door repeatedly.

‘The culture of Momentum is creating this.

‘This is what they’ve also been doing to Jewish Labour MPs and now they have turned it on to people like me. But it’s counter-productive. People see this and just think these people are nasty.’

A Scotland Yard spokesman said: ‘Police were called at 9am on Monday, November 25, to graffiti on a premises. Officers are investigating. There has been no arrest.’

Mr Duncan Smith said: ‘The police have said if there is someone who wants to get you, it will be at a static location, so they’ll have somebody at the polling station.

‘They’re slightly concerned about it now. The police have all this [online] stuff now and they don’t like what they see.’

Three people who posted the abuse online have also ‘liked’ the hard-Left Momentum movement on Facebook, with one liking a page set up in appreciation of Karl Marx. Another liked a page called ‘Make Marxism Mainstream Again’ while a further user who posted abuse appeared to be an SNP supporter.

Dr Shaheen said she strongly condemned ‘all acts of intimidation and criminal behaviour’ and was ‘disappointed’ to see Mr Duncan Smith’s office turned into a target.

She told The Daily Telegraph: ‘We must take action to stop the current toxic political environment.’

Momentum said: ‘We’re busy running a positive campaign speaking to thousands of voters about the real change Labour is offering them.’