Rome: Pope Francis has broken his silence on the protests convulsing Iran, denouncing the recourse to the death penalty there and seemingly legitimising the rallies as “demanding greater respect for the dignity of women”.

Francis made the comments in an annual speech to ambassadors accredited to the Vatican, a foreign policy speech he delivers at the start of each year outlining the areas of greatest concern for the Holy See. 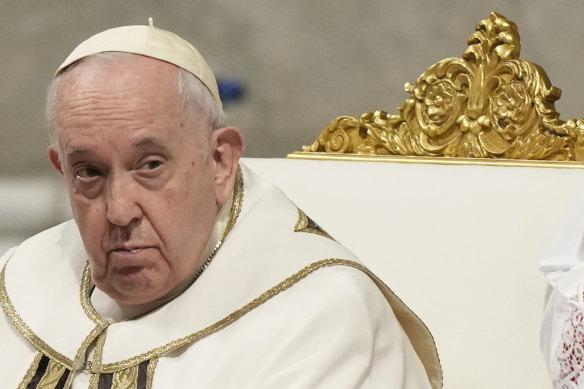 Pope Francis presides over an Epiphany mass in St Peter’s Basilica, at the Vatican, on January 6.Credit:AP

“The right to life is also threatened in those places where the death penalty continues to be imposed, as is the case in these days in Iran, following the recent demonstrations demanding greater respect for the dignity of women,” Francis said. “The death penalty cannot be employed for a purported state justice, since it does not constitute a deterrent nor render justice to victims, but only fuels the thirst for vengeance.”

His comments marked his first public remarks about the protests that erupted in Iran in mid-September over the death of Mahsa Amini. The 22-year-old woman died after being arrested by Iran’s morality police for allegedly violating the Islamic Republic’s strict dress code. Women have played a leading role in the protests, with many publicly removing the compulsory Islamic headscarf, known as the hijab. 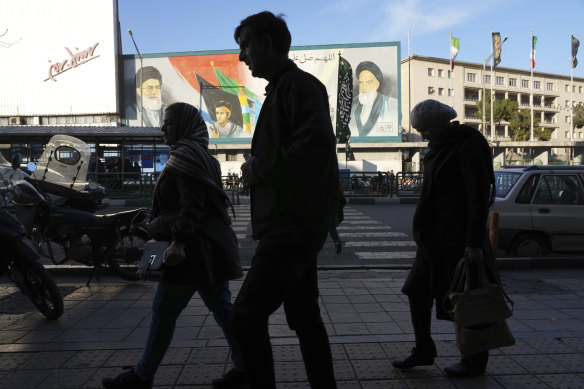 Pedestrians walk in front of a mural showing the late Iranian revolutionary founder Ayatollah Khomeini, in downtown Tehran on Saturday.Credit:AP

At least four people have been executed since the demonstrations began, following internationally criticised, rapid, closed-door trials. Three other protesters, Saleh Mirhashemi, Majid Kazemi and Saeed Yaghoubi, were told at a recent hearing they too would be executed, the London Telegraph reported on Tuesday. Another, Amir Nasr-Azadani, a former footballer, was sentenced to 26 years in prison, to serve 16.

At least 519 people have been killed in the months-long demonstrations, with more than 19,200 others arrested, according to Human Rights Activists in Iran, a group that’s been monitoring the protests since they began. It’s become one of the greatest challenges to the country’s Shiite theocracy since its 1979 Islamic Revolution.

Francis has been cautious to not call out Iran’s government, given his attempts to foster dialogue with the Muslim world. He has forged a strong relationship with the imam of the Al-Azhar in Cairo, the seat of Sunni learning. But his attempts to forge dialogue with the Shiite world have been more circumspect, though he held a landmark meeting in 2021 with the top Shiite cleric in Iraq, the Iranian-born Grand Ayatollah Ali al-Sistani.

There was no immediate reaction to Francis’ remarks, though Iran Supreme Leader Ayatollah Ali Khamenei in Tehran on Monday called for a “stern” reaction to the ongoing demonstrations. He said those who set fire to public places had committed “treason with no doubt” – a crime that carries the death penalty. He also repeated an allegation that foreign powers had fomented the unrest, without providing evidence to support the claim.

The remarks by Khamenei could embolden authorities to continue the harsh punishment of detainees.

UN spokesman Stephane Dujarric, asked for Secretary-General Antonio Guterres’ reaction to the death sentences and executions in Iran, told reporters Monday: “We cannot condemn enough the use of the death penalty.”

“Every time the secretary-general has spoken to an Iranian official, he has expressed his concern about the overall situation regarding the demonstrations that we have seen, among others,” Dujarric said.

Pope Francis referred to the Iran protests in lamenting overall that women in many parts of the world are treated as “second-class citizens”.

“They are subjected to violence and abuse, and are denied the opportunity to study, work, employ their talents, and have access to health care and even to food,” he said. While Francis has appointed women to many high-ranking jobs in the Vatican, some women say they too are treated as second-class citizens in the Catholic Church since they can’t be ordained priests.

Francis also referred to Iran in his remarks lamenting the continued threat posed by nuclear weapons in Russia’s war in Ukraine, but also in the breakdown of talks over Iran’s atomic program. Francis has changed church teaching to declare that not only the use of nuclear weapons, but the mere possession of them is immoral.

He said the stall in Iran talks was a point of “particular concern.”

Iran insists its nuclear program is peaceful, though it now enriches uranium closer than ever to weapons-grade levels and has drastically limited international oversight of its atomic activities in recent years since the collapse of its nuclear deal with world powers.

In his remarks, Francis listed conflicts, natural disasters and migration crises afflicting the planet, but also the threats to democracy — particularly in the Americas.

Making a last-minute change to his speech, he added in the “events in recent hours in Brazil”, a reference to the thousands of ex-president Jair Bolsonaro’s supporters who stormed Congress, the Supreme Court and presidential palace, trashing the nation’s highest seats of power.

“In many areas, a sign of the weakening of democracy is heightened political and social polarisation, which does not help to resolve the urgent problems of citizens,” he said. “I think of the various countries of the Americas where political crises are laden with tensions and forms of violence that exacerbate social conflicts.”

In addition to Brazil, he cited Peru and Haiti, in saying that “there is a constant need to overcome partisan ways of thinking and to work for the promotion of the common good.”