The Trump administration has declared New York State a major disaster area as the number of confirmed coronavirus cases skyrockets and it becomes the epicenter of the US outbreak.

President Trump’s declaration comes four days after it was requested by New York Governor Andrew Cuomo and paves the way for the federal government to pay for up to 75 per cent of the state’s bills for its emergency response to the pandemic.

New York now has the most confirmed COVID-19 cases in the nation, with 7,102 diagnoses and 38 deaths, as the number of confirmed cases shot up by more than 2,000 between Thursday and Friday, Syracuse.com reported. 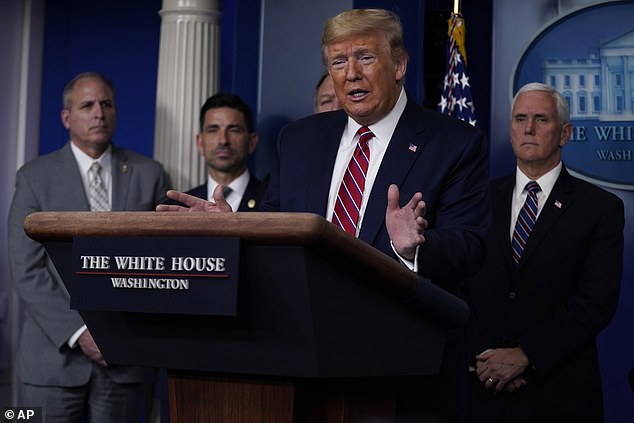 FEMA will now be able to send personnel and resources to the state, as well as set up mobile coronavirus testing centers, disinfect public facilities and provide in-demand medical supplies including face masks, gloves and surgical gowns.

Earlier in the week, an intensive care nurse at Montefiore Medical Center in the Bronx, said nurses are being asked to re-use masks if they have only been with patients a short time – raising their risk of infection, because supplies were running so low.

‘We don’t want to reuse a mask that we’re going to touch with our hands, our bare hands, and then go and put it back on our face when it could have the COVID virus on it,’ nurse Michelle Gonzalez told CBS 2.

‘We find it important that we don’t reutilize these masks so that we don’t put the rest of our community and our fellow co-workers at risk.’

Prior to Trump’s declaration, Cuomo issued a total ban on non-essential businesses and warned there would be strict fines for any businesses that do not comply Friday.

The ban – which will impact 19.5million people – is to go into effect on Sunday evening and is indefinite.

Public transportation would also continue as usual, but it was unclear whether cabs, and ride shares including Ubers and Lyft would be forced to stop.

White House coronavirus expert Dr. Anthony Fauci spoke around an hour after Cuomo’s announcement to say he ‘strongly supported it’.

Cuomo said he had tried to put off the order but felt he could no longer hold off as the number of cases continued to rise.

‘These actions will cause businesses to close. They will cause much unhappiness. I understand that.

‘I’ve spoken to my colleagues around the state, there’s a spectrum of opinion. Some people say we don’t need to do this, it’s going to hurt the economy. Just so we’re all clear – this is a state wide order.

‘It’s not what your county executive is doing, your mayor, it’s not what anyone else but me is doing. I accept full responsibility.

‘If someone is unhappy and wants to blame someone or complain about someone – blame me. There is no one else who is responsible for this decision.

‘I’ve been in public service for many, years, managed dozens of emergencies, the philosophy that always worked is prepare for the worst and hope for the best.

‘That is what we’re doing. ‘In 10 years, I want to be able to say I can say to the people of New York that I did everything I could do.

‘This is about saving lives and everything we do saves just one life, I’ll be happy. This is science and math. Watch the number and trajectory.

‘You have the density control valve. If the number doesn’t slow down, tighten the valve more… then close the valve. We’re closing the valve.

‘Everybody has personal freedom and I’ll always protect that….but everybody also has a responsibility.

This is the first time in US history that a president has ever had to declare a major disaster over a public health threat.

Major disasters are typically declared over natural disasters, including hurricanes, earthquakes and flooding.