Children who aren’t unwell shouldn’t have to self-isolate to curb the spread of Covid, one of the country’s top coronavirus experts said today.

Sir Andrew Pollard, who helped develop the Oxford University/AstraZeneca vaccine, said it ‘makes sense for them to be in school’.

Last term children in England had to self-isolate for 10 days if another pupil in their bubble – which can be an entire year group – tested positive for coronavirus.

The rules caused mayhem, with 1.13million children off school on a single day in July due to the virus.

Nine in 10 of these pupils were isolating due to being in contact with an Covid case, while the rest either had symptoms or tested positive. 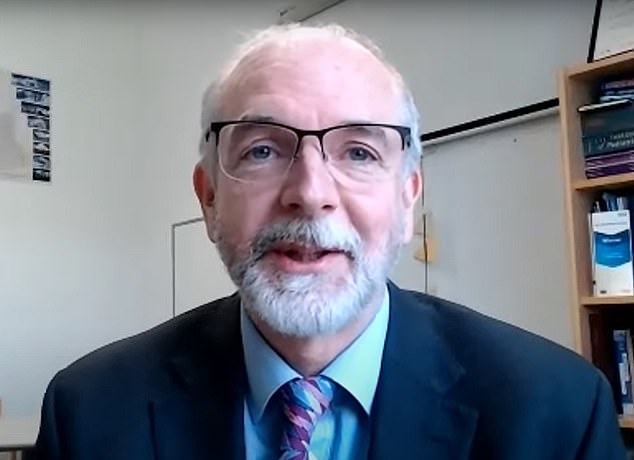 Covid variants that can escape the protection given by vaccines are an ‘absolute inevitability’, infectious disease expert Professor Paul Hunter has said.

He was speaking today to the All-Party Parliamentary Group on Coronavirus, which was hearing evidence on vaccinating children, booster jabs and access to jabs.

Professor Paul Hunter, from the University of East Anglia, told the All-Party Parliamentary Group on Coronavirus: ‘It is absolutely inevitable that we are going to get escape variants coming in.’

Mutations deemed variants of concern in the UK include the Kent ‘Alpha’ variant, the South African ‘Beta’ mutation, the Indian ‘Delta’ strain and the Brazil ‘Gamma’ variant.

Vaccines are thought to be less effective against Beta and Delta.

Professor Hunter said the seasonal coronaviruses in circulation will infect people ‘repeatedly’ throughout their lives, typically on average every four or five years.

He said: ‘Quarter of the UK population will get infected on average every year, what that means is about 45,000 people will be infected every day with theses other coronaviruses.

‘Ultimately what happened with these other coronaviruses is that although you get a gradual escape, because we are getting re-infected so frequently, we actually keep up.’

Prof Devi Sridhar, chair in global public health at the University of Edinburgh, added: ‘We have already seen Alpha, Beta, Delta, it is inevitable.’

She added that vaccines had ‘transformed’ the pandemic but ‘not solved it’.

Education Secretary Gavin Williamson said last month that the use of ‘bubbles’ will come to an end. From August 16, children in England will only need to self-isolate if they have tested positive.

Pupils contacted by Test and Trace as a contact of a positive case will be required to take a PCR test but they will only have to isolate if they themselves test positive.

It prompted concerns from some experts at the time, who criticised the approach.

The APPG was hearing evidence from experts on inoculating children, booster jabs and global access to vaccines.

Professor Pollard said: ‘Given that children have relatively mild infection compared to adults… we probably should be moving to a situation where we’re clinically-driven.

‘If someone is unwell, they should be tested.

‘But for those contacts in the classroom, if they’re not unwell then it makes sense for them to be in school and being educated.’

He said clinically-driven testing should be the approach in the community as well.

He said: ‘Over time we need to be moving to clinically-driven testing as well where it’s people who are unwell who get tested and treated and managed, rather than lots of community testing in people who have very mild disease.’

It comes after a study by experts at Oxford University revealed daily testing of close contacts was just as effective as isolating for stopping the spread of Covid.

The study found fewer than one in 50 people who were close contacts of an infected person had Covid.

Professor Pollard added: ‘Anybody who has not been vaccinated will at some point meet the virus.

‘It might not be this week, this month or this year but they will meet the virus.’

He also said: ‘Herd immunity is not a possibility because it still infects vaccinated people.

‘I expect what it will throw up next is a variant even better at infecting vaccinated people.’

‘One of the strongest argument to vaccinate children is to protect adults. The vaccine doesn’t fully stop transmission, so doing that doesn’t protect adults.’

Separately, Professor Pollard told the APPG said the fight against Covid should focus on preventing hospitalisations and death.

He said: ‘We can’t do anything to stop new variants emerging around the world.  We need to focus on how do we prevent people dying or going to hospital.

‘We had 67,000 deaths around the world last we and more than 4billion vaccine doses were deployed globally.

‘There are enough doses given out around the world to have prevented those deaths but they died anyway.

‘What we can do is play a more active role in the global imperative to stop people dying and make sure vaccines are going to the right people.’

Around 30 per cent of the world has now received a dose of a vaccine and 15.5 per cent are fully immunised, according to Our World in Data.

But the data shows only 1.1 per cent of people in low-income countries have received a single dose.