Queen Elizabeth II paid an emotional tribute to her “beloved Philip” in a deeply personal Christmas Day message after a year of great loss for her family and so many others.

Britain’s 95-year-old monarch, delivering her first annual holiday address to the nation since the death of Prince Philip in April, spoke about her late husband and reflected on what will be a bittersweet holiday for the royals and the world.

“Although it’s a time of great happiness and good cheer for many, Christmas can be hard for those who have lost loved ones,” she said in the televised speech recorded days earlier and penned by the queen herself.

“This year, especially, I understand why.”

The traditional holiday message took a more somber tone as the monarch marked her first festive period without her closest companion in life, but she also expressed hope and optimism for the new year ahead.

"Even with one familiar laugh missing this year, there will be joy in Christmas," she said.

The speech is traditionally watched by families across the U.K. as they settle down in front of the television before or after enjoying their Christmas meal.

Unlike last year, when strict Covid-19 restrictions left many Britons unable to mark the occasion together, families and friends were able to gather this year in spite of the surging omicron variant. Christmas Eve saw another record number of daily positive cases recorded in the country, with estimates suggesting as many as 1 in 10 people in London have the virus.

The monarch spent Christmas Day at Windsor Castle, about 25 miles west of the capital, for the second year in a row after cancelling her tradition plans to spend Christmas at the Sandringham estate in Norfolk. She was joined by Prince Charles, her eldest son, and Camilla, Duchess of Cornwall.

The decision came as Covid spread but also after the queen faced her own health difficulties earlier this year, with the monarch spending a night in hospital back in October and canceling a string of events after receiving medical advice to rest.

The queen's speech was recorded from the White Drawing Room at Windsor on Thursday, with a framed photo of her and Philip arm in arm visible on the desk beside her. The picture was taken in 2007 at Broadlands, Hampshire, to mark the couple's Diamond Wedding Anniversary. She also wore the same sapphire chrysanthemum brooch in the photo and the televised address.

Elizabeth addressed the difficult reality many around the world are facing this Christmas as they try to mark the holiday with — or without — their loved ones and amid fears about the surging new variant.

“While Covid again means we can’t celebrate quite as we may have wished, we can still enjoy the many happy traditions,” the queen said. 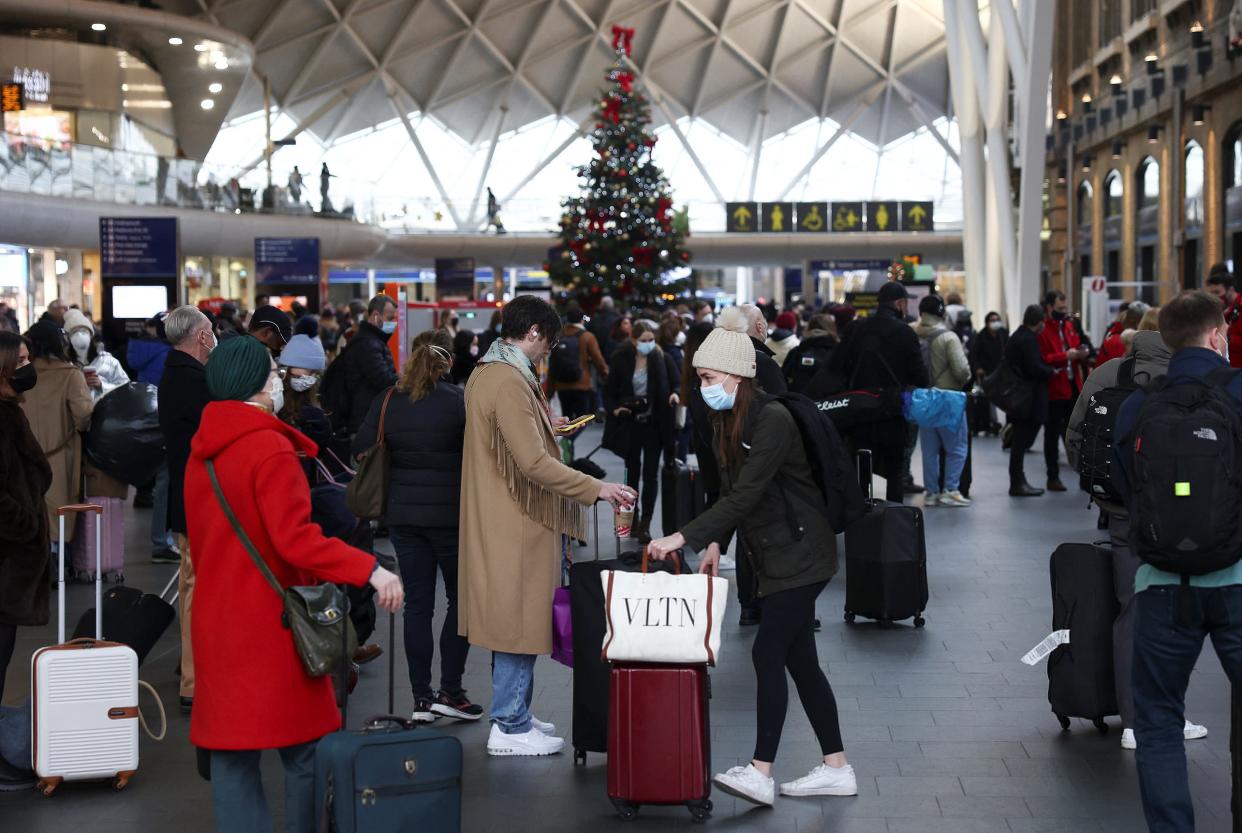 Despite her sorrow, the queen said that in the months since Philip's death at age 99 she had "drawn great comfort from the warmth and affection of the many tributes to his life and work — from around the country, the Commonwealth and the world."

“His sense of service, intellectual curiosity and capacity to squeeze fun out of any situation — were all irrepressible," she said of her late husband, who carried out official duties supporting Elizabeth for 65 years before retiring from his public role in 2017. “That mischievous, enquiring twinkle was as bright at the end as when I first set eyes on him."

Download the NBC News app for breaking news and politics

“But life, of course, consists of final partings as well as first meetings — and as much as I and my family miss him, I know he would want us to enjoy Christmas," the queen said, adding that she had felt Philip's presence with her as she prepared to mark her first holiday season without him.

Those traditions that could still be enjoyed include the “singing of carols — as long as the tune is well known,” the queen said, as well as “watching a favorite film where we already know the ending.”

The queen also spoke of Philip’s environmental work and her pride that Charles and his eldest son, Prince William, have followed in his footsteps with their work on the issue, including at this year’s COP26 climate change summit in Glasgow.

Looking ahead to the new year, Elizabeth said she looked forward to the start of her Platinum Jubilee year from February, which will mark the 70th anniversary of her accession to the throne.

The queen said she hoped the celebration would be "an opportunity for people everywhere to enjoy a sense of togetherness," as well as "a chance to give thanks for the enormous changes of the last 70 years — social, scientific and cultural — and also to look ahead with confidence."

For now, she said she would be celebrating Christmas, a holiday that "can speak to the child within us all."

“And for me and my family, even with one familiar laugh missing this year, there will be joy in Christmas, as we have the chance to reminisce, and see anew the wonder of the festive season through the eyes of our young children, of whom we were delighted to welcome four more this year," the queen said.

Among those new children is Lilibet, the daughter of Prince Harry and Meghan, the Duchess of Sussex. She was named after the queen — Lilibet is the monarch's nickname used by her family — as well as her paternal grandmother, Diana, the Princess of Wales.

Her arrival came during a difficult year for the royals, with Harry and Meghan's definitive exit in the wake of a fierce family feud drawing global attention and unwanted headlines centered on accusations of racism and bullying.

But in spite of the year's setbacks and challenges, the queen ended her speech on an optimistic note.

She expressed hope for brighter days ahead, saying children “teach us all a lesson — just as the Christmas story does — that in the birth of a child, there is a new dawn with endless potential.”