London: A convicted murderer who fought the London Bridge terror attacker is set for early release after being granted a Queen's pardon.

Steven Gallant – jailed for murder in 2005 – has had his sentence reduced by a Royal Prerogative of Mercy, known as a royal pardon, cutting 10 months off his 17-year sentence. 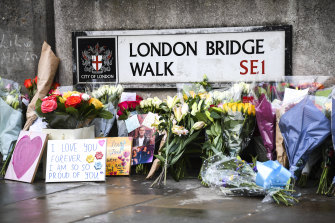 Flowers left at London Bridge in memory of Jack Merritt and Saskia Jones, who were killed in the 2019 attack. Credit:AP

The 42-year-old had been on his first day-release at a conference to help rehabilitate prisoners, when Usman Khan, 28, launched his attack last November.

Wielding a pair of knives, Khan killed Jack Merritt, 25, and Saskia Jones, 23, who were both co-ordinating the Learning Together event.

Gallant later told how civil servant Darryn Frost handed him a 1.5 metre narwhal tusk from a display as Khan ran at him.

He said: "I saw injured people. Khan was stood in the foyer with two large knives in his hands. Had Darryn not passed me the narwhal tusk, not only could I have been killed, but the situation could have been even worse." 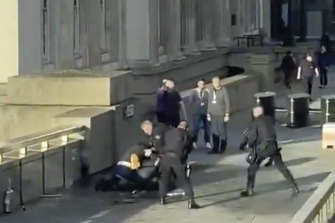 A man wearing a fake explosive vest stabbed several people before he was tackled by bystanders and then shot dead by armed officers on London Bridge.Credit:@HLOBlog

Khan, wearing a fake suicide vest, fled on to London Bridge from the event at Fishmongers' Hall, chased by Gallant and three others. After Khan was cornered, they fought with him, trying to disarm him. Anti-terror police approached, got the bystanders out of the way and shot the attacker dead.

Merritt's father, David, 55, from Cottenham, Cambs, said: "Steve fully deserves it. He was close to Jack and turned his life around and reformed." Jack had mentored Gallant in jail since 2016 through his role at Learning Together. Gallant called him a "role model and friend". The pardon's sentence cut means he could go before a Parole Board as early as next June.

It is extremely rare for convicted killers to be given pardons.

The Ministry of Justice said it was "in recognition of his exceptionally brave actions, despite the tremendous risk to his own".

Neil Hudgell, Gallant's solicitor, said: "Steve is very happy. He's passionate about using his experiences to steer others away from crime."

Gallant was jailed for life in 2005 for beating to death ex-firefighter Barrie Jackson, 33, in Hull, believing he had attacked his girlfriend.

Jackson's son Jack, 21, said last night: "I have a lot of mixed emotions. If someone has undergone rehabilitation, which it seems he has, then it's fair enough.

"What happened at London Bridge shows people can change."