North Korea stops dismantling of nuclear sites: Satellite images reveal nothing has been done for weeks despite Kim’s denuclearisation promise

Satellite photos of North Korea’s nuclear test facilities appear to show that work to dismantle to controversial sites has ground to a halt.

Pictures taken on August 16 at the Sohae Satellite Launching Station, North Korea’s only operational space launch facility, seem to show little effort has been made to dismantle visible structures since the start of the month – Washington think tank 38 North reports.

Launch pad structures which had been partially dismantled remain standing at several sites around the station while support bunkers also have yet to be demolished.

It also appears there are less construction vehicles on site than in previous aerial photographs. 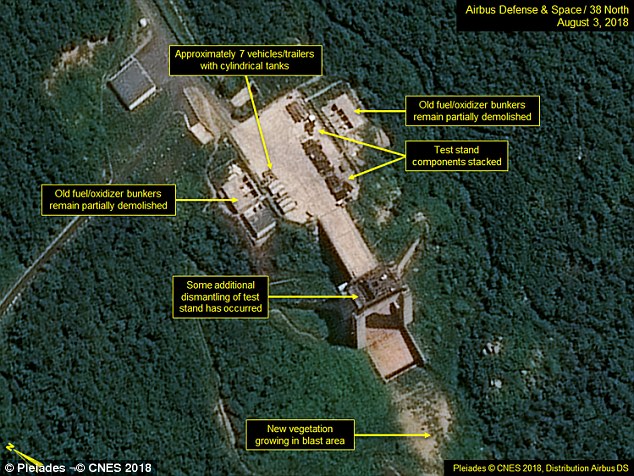 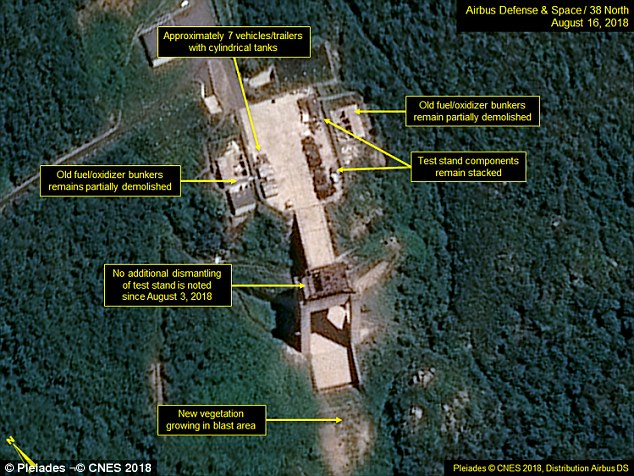 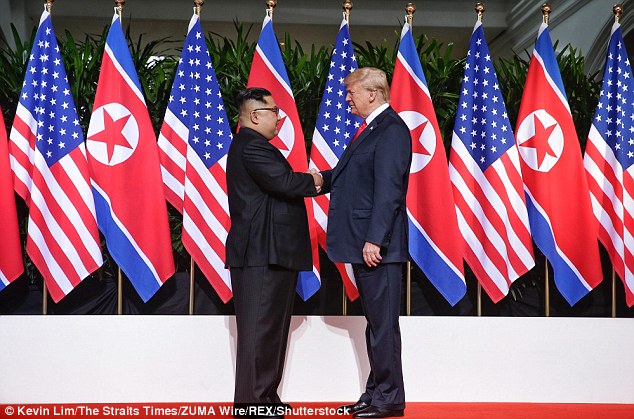 The damning pictures emerge as the commander of U.S. forces in South Korea said Wednesday that he’s cautiously optimistic nuclear diplomacy will work out with North Korea.

But he also said Seoul and Washington must continue to apply pressure so that ‘there’s not a reason or even an ability’ for the North to back out.

Gen. Vincent Brooks told reporters that reports about continuing nuclear and missile development activities in North Korea show that Pyongyang currently lacks confidence that it can take real steps toward denuclearization and still be safe.

‘While I do seek to have empathy to understand why North Korea is doing what it’s doing and where it’s coming from, nevertheless, this is a condition North Korea created for itself,’ Brooks said at a news conference in Seoul.

‘They will have to take the risk to move into the direction toward peace, given that they created the circumstances we are in.’ 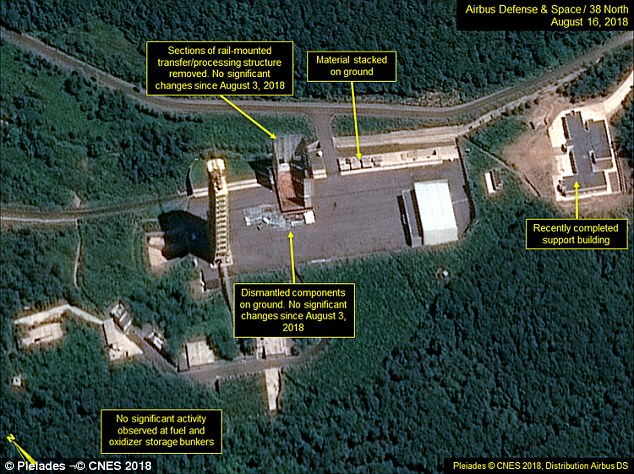 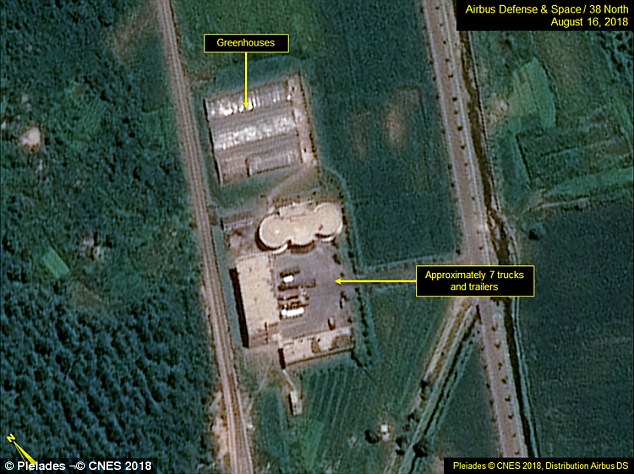 ‘The amount of progress that has been made in the relationships among countries since this time last year is perhaps not something that could have been conceived of last year and yet it has happened,’ Brooks said.

‘But we still have to see earnest action being taken on those matters of great concern like denuclearization. There is still a need for continued pressure so that there’s not a reason or even an ability for North Korea to back up.’

Following a provocative year in weapons development, during which it tested a purported thermonuclear warhead and demonstrated potential capability to strike the U.S. mainland, the North has shifted to a diplomatic approach in 2018.

North Korean leader Kim Jong Un held a historic summit with President Donald Trump in June. They issued aspirations for a nuclear-free Korean Peninsula without describing when or how it would occur.

Post-summit talks aimed at mapping out a denuclearization process got off to a rocky start, with North Korea accusing a senior U.S. delegation led by Secretary of State Mike Pompeo of making unilateral demands for the country to relinquish its arsenal.

North Korea has also been demanding that the United States fast-track discussions on a declaration to formally end the Korean War, which stopped with an armistice and not a peace treaty. 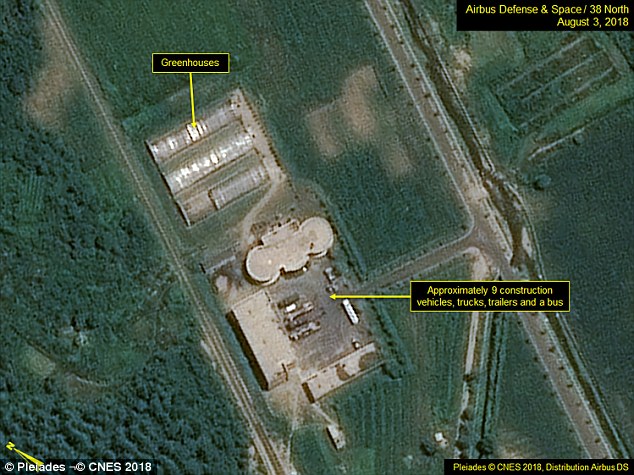 Thousands of North Korean ‘soldier-builders’ in olive green uniforms and bright red hardhats are doing everything from digging ditches to putting up walls on multistory apartment blocks and government buildings in this northern city near the Chinese border.

Samjiyon is one of the main focuses of a massive nationwide construction campaign ahead of North Korea’s 70th anniversary in what leader Kim Jong Un has described as a symbolic battle against anyone who would oppose his country.

The Sept. 9 anniversary is shaping up to be the biggest event since Kim assumed power in late 2011. Along with huge rallies in Pyongyang on the day itself and the revival of North Korea’s trademark mass games at the stadium, Kim has deployed soldiers and ordinary citizens alike to erect buildings, improve roads and work on other infrastructure on a scale unseen in recent years. 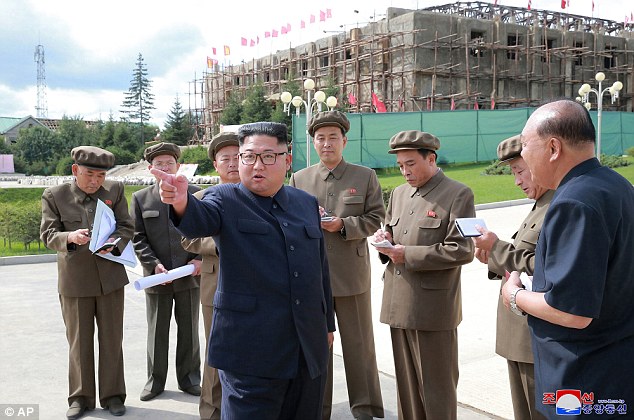 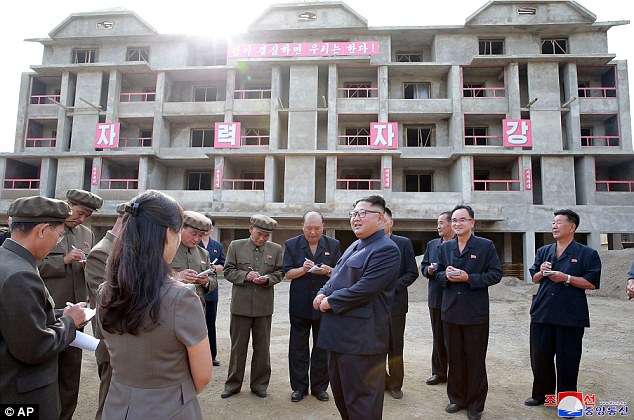 The construction spree is intended to improve living conditions in keeping with one of Kim’s first promises to the nation, that he would bolster the economy so they would no longer need to ‘tighten their belts.’ But it is also a demonstration of the power of his regime in the face of U.S.-backed international sanctions intended to squeeze his economy and force him to abandon his nuclear weapons.

Kim made that political message clear during a visit to Samjiyon with his wife last week, when he was quoted by state media as saying ‘the hostile forces’ persistent sanctions and obstructive moves’ have come as a serious setback, but added the North Korean people have risen to the challenge and are ‘making a history of legendary miracles despite the most difficult conditions.’

Kim said that by ‘showily’ building up Samjiyon, the nation is in effect fighting a symbolic battle against those who would try to stifle its ‘socialist civilization.’

Samjiyon lies at the foot of Mount Paektu, which is closely linked to the Kim family and is considered the spiritual center of the North Korean revolution.

Steamrollers and other heavy equipment are rare, so roadwork is particularly labor-intensive. Work crews spreading out nearly 20 kilometers (10 miles) from the city limits fill potholes with shovelfuls of dirt and flatten surfaces with wooden tools. 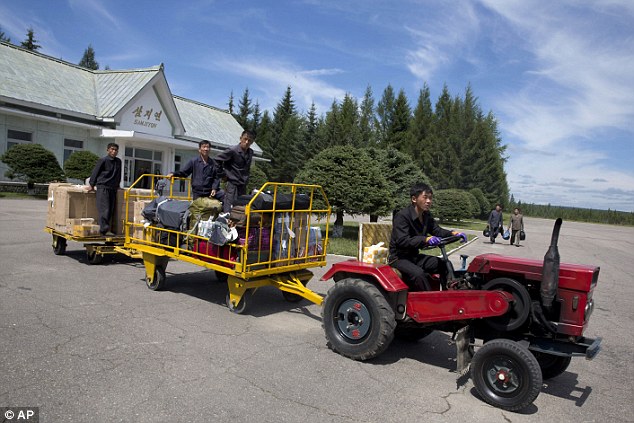 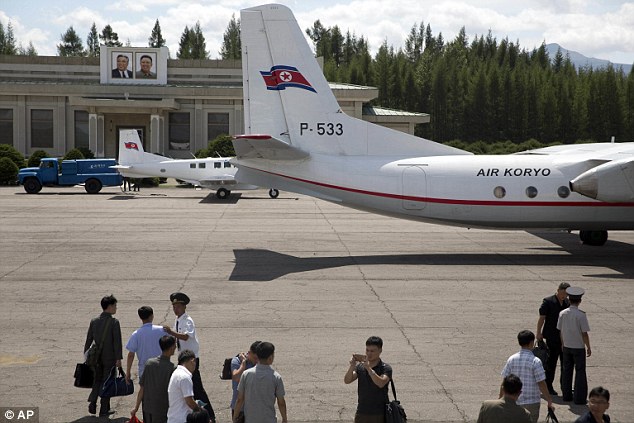 The work has transformed Samjiyon from a relatively sleepy provincial center surrounded by potato farms into a buzzing hub of activity the likes of which would be hard to find anywhere else. The government says it is to be the model for future development projects nationwide. The Associated Press was allowed to view the city on the same day Kim visited, but was not allowed to shoot photos.

One important aspect of the building boom is that much of the work is being done outside of Pyongyang. Under three generations of Kim leadership, the capital has gotten the bulk of funding and is far more developed than the rest of the country, creating a glaring – and potentially destabilizing – gap between the capital and the provinces.

Along with Samjiyon, major construction projects are underway in several other cities – including 20-story high-rise apartments in the eastern port city of Chongjin and extensive infrastructure and tourism-related facilities in Wonsan, another port on the country’s eastern coast. Under Kim, Wonsan has gotten a new airport that officials hope will attract international visitors in the near future. More than a dozen resort hotels are being built near its coastline.

The construction campaign is all the more ambitious considering it comes at a sensitive time for Kim, who has held a series of summits over the past several months with China, South Korea and the United States in an attempt to undermine support for sanctions and establish his position on the global stage as the head of a nuclear power.

His diplomatic gambit appears to be working in many ways. 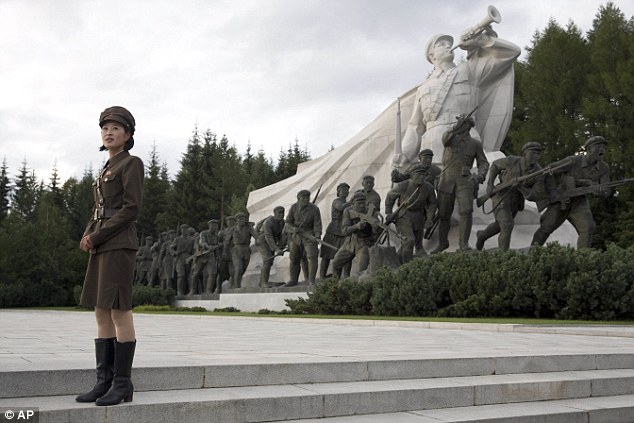 Chinese businesspeople and tourists are once again flowing over the borders – several large tourist groups were in Samjiyon last week – and South Korean officials are seriously considering ways to help the North improve its roads and railways. But doubts are growing over whether Kim has any real intention to meet Washington’s main demand and unilaterally abandon the nuclear weapons he worked so hard to develop over the past five years.

That rift with Washington could significantly complicate Kim’s rapprochement with his neighbors and stifle his efforts to woo the trade and investment he needs to fund his development projects. A crucial indicator of where Kim stands will come soon after the Sept. 9 anniversary when he is scheduled to hold another summit with South Korean President Moon Jae-in, this time in Pyongyang.

Moon, who has been playing a middleman role between Pyongyang and Washington, is under a great deal of pressure to broker progress toward denuclearization. Without tangible progress, he will be hard-pressed to justify going against Washington’s ‘maximum pressure’ policy and easing sanctions any further.

In any event, it appears Kim is ready to forge ahead. Though many improvements will be completed by Sept. 9, it is clear from the construction in Samjiyon that his plans go much further into the future than that. Dozens of buildings are still in the skeletal stages and will likely require several more months to finish.

In the meantime, scenes of Kim giving his on-the-spot guidance to senior officials feverishly taking down his every word in their notebooks has dominated the TV news in the North each day since his visit to Samjiyon. 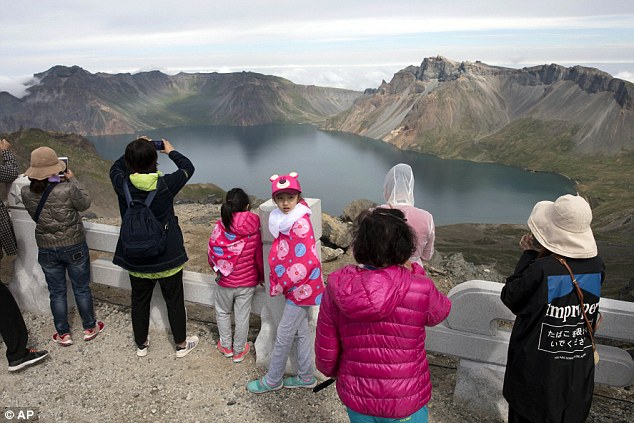