Saudi authorities have released an Iranian supertanker which has been held in Jeddah since May.

The tanker, Happiness 1 was steaming through the Red Sea when it lost all propulsion and steering on April 30, while 43 miles south west of Jeddah.

Iran was forced to appeal to Saudi Arabia for assistance through its permanent delegation at the United Nations in New York. 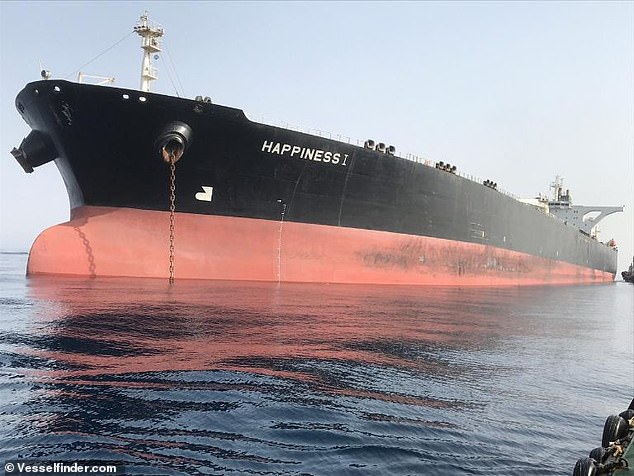 Iranian oil tanker Happiness 1 is being towed home having lost all propulsion and steering when its engine room flooded in the Red Sea on May 30. The vessel was held by Saudi authorities who rescued it due to a row over repair costs

The Saudi coast guard brought the stricken 160,930-tonne super tanker and its 26 crew to Jeddah, where they were held until earlier today.

It is understood, Saudi Arabia refused to release the vessel due to a row over payment.

The vessel and its crew of 24 Iranians and two Bangladeshis were released earlier today.

The MarineTraffic website showed the tanker was heading south from Jeddah along with two ocean-going tugs as it begun its 2,500-mile journey home.

Iranian media claimed the vessel was returning to Iran, through the Gulf of Aden and into the Arabian Sea before entering the Gulf of Oman.

The Mehr news agency reported in early July that Saudi officials were not allowing the ship to leave the port because of a dispute over the payment of repair costs.

Iran and Saudi Arabia are arch-adversaries in the Middle East, backing opposite sides in several regional conflicts.