Giacomo Gobbo, for many immigrants to Australia, was a shining exemplar of what might be achieved by a fine and determined mind within Australia’s multicultural burgeoning.

As Sir James Gobbo, he became a widely respected barrister, Queen’s counsel and, for 16 years, judge of the Supreme Court of Victoria. 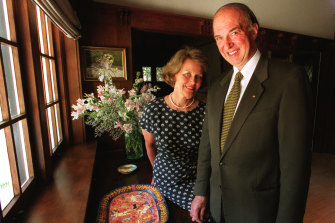 In 1997, he became the first governor of Victoria to come from a non-English-speaking background.

His death at age 90 has been marked by tributes from leading political, legal, church and community figures, and the announcement by Premier Daniel Andrews that Sir James will be accorded a state funeral, to be held on November 16 at St Patrick’s Cathedral.

There was no silver spoon in this man’s childhood. Giacomo “James” Augustine Gobbo was born in Carlton in 1931 amid the devastation of the Great Depression.

His father Antonio, who had emigrated from northern Italy in 1927, was a terrazzo worker – a trade with rapidly shrinking opportunities as the economy collapsed. His mother Regina took in boarders from Melbourne’s Italian community, enclosing the verandah of the family’s terrace home with calico to create sleeping quarters.

By 1935 the Gobbos had returned to Italy. But still restless, they came back to Australia within three years.

Giacomo, aged seven, spoke not a word of English when the family landed back in Australia, though his career in the law and on the vice-regal stage would rely on an unusually elegant grasp of the language, both spoken and written.

In 1939 the Gobbos bought a cafe, the St Kilda Grill Rooms in North Melbourne. With relentless work beginning to grant the family a stable future, young Giacomo’s mother determined that her son had a flair for academic learning and set about persuading him to study hard.

By 1944 he was accepted into Xavier College, from which he graduated to Melbourne University to study law, residing at Newman College.

Awarded the Rhodes Scholarship for 1952 – the first Catholic since 1929 to be so honoured – the young Gobbo vaulted to Oxford University, where he attained a master of arts degree. 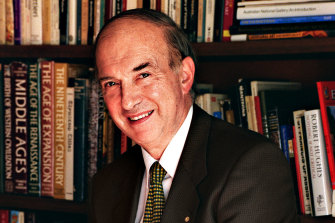 But it wasn’t all books. He also pursued a passion for rowing, which had begun at Xavier. He became president of the Oxford University Boat Club and rowed in the crew that won the 100th Oxford-Cambridge Boat Race.

Back in Australia, his legal career taking off, he married former librarian Shirley Lewis in 1957. They had five children.

After two decades as barrister and Queen’s counsel, Gobbo was appointed to the Supreme Court of Victoria as a judge in 1978 and continued on the bench until 1994.

Along the way, he was honoured with a knighthood in 1982 for services to the community.

Sir James was again honoured in 1993, made a Companion of the Order of Australia for service to the law, multicultural affairs and hospitals. He also became a Knight of Malta.

Mr Kennett said Victoria was “a better place as a result of Sir James Gobbo’s life and contribution.

“He was one of the most genuine of men … I have ever met. He has influenced the lives of so many and set a standard of high achievement and humility rarely seen in our increasingly commercial world where people seem to be increasingly judged on the size of their bank accounts.”

After Sir James retired at the end of 2000, when new premier Steve Bracks announced the new governor would be John Landy, Sir James was made commissioner for Italy for the Victorian government.

Prime Minister Scott Morrison said in a statement on Monday that Sir James was “was rightly proud of his rich Italian heritage and of the multicultural nation he served. In so many ways, Sir James was the father of modern multiculturalism in Australia, which stands as one of his most significant legacies.”

Federal Parliament’s longest-serving MP Kevin Andrews said he was honoured to have served as Sir James’ associate for two years when he was a justice of the Victorian Supreme Court. “He was a wonderful mentor and friend,” Mr Andrews tweeted on Sunday night. “He was a great Australian, always conscious and proud of his Italian heritage.”

Federal Education Minister Alan Tudge described Sir James as “a great advocate of our unique ability to integrate people from around the world into our one great multicultural nation”.