Six West Australians who completed two weeks in quarantine at the now-evacuated Hotel Grand Chancellor in Brisbane before returning home have been forced back into isolation.

The Grand Chancellor was used by the Queensland government for Australians returning from overseas but was evacuated on Wednesday night after six cases of the mutated UK strain of COVID-19 were linked back to one floor. 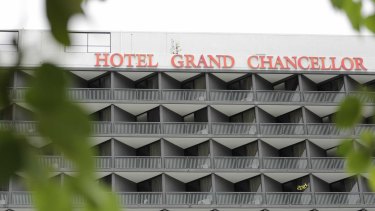 Six cases of the highly contagious UK variant of COVID-19 have been linked to the Hotel Grand Chancellor.Credit:Matt Dennien

States have begun ordering anyone who stayed in the hotel over the past two weeks to go back into 14 days isolation.

WA Premier Mark McGowan confirmed six people had begun a new isolation period in Perth but all had tested negative.

"They're all in home quarantine and their close contacts are being monitored on a daily basis so they'll be further tested," he said.

"Obviously as time goes by we're doing everything we can to make sure the virus doesn't spread into the Western Australian community."

Health Minister Roger Cook said he was confident the risks were low.

"They're certainly isolating but their contacts at this point in time won't be required to isolate, although it is important that we identify them and that they monitor their health situation," he said.

"It was one floor of that hotel and although we can't identify how it moved from one room to another on that same floor it is at this point in time a very low risk."

The UK variant of the virus is between 60 and 70 per cent more contagious than older strains and has overrun health systems there with more than 1500 deaths reported in one day this week.

Queensland authorities still do not know how the UK variant spread across level seven of the Grand Chancellor Hotel, with investigations into everything from flushing toilets to the circulation of airconditioning vents.

The virus has prompted a warning from Queensland Premier Annastacia Palaszczuk for the entire country to rethink its hotel quarantine systems.

"I think we need to immediately look at the way in which we are handling people coming into the country, international arrivals also, looking at the quarantine hotels that they are going into," she said.

Mr Cook said after receiving verbal health advice from the chief health officer, the quarantine period required of people who test positive for the UK variant have been increased.

"Certainly we've received advice that although our hotel quarantine arrangements are suitable, what we will now require patients who are COVID-positive to do is to remain in quarantine for another 14 days from their diagnosis," he said.

On Thursday WA reported two new cases of COVID-19, a man in his 30s and a man in his 40s who are both in hotel quarantine. There are 17 active cases in the state.