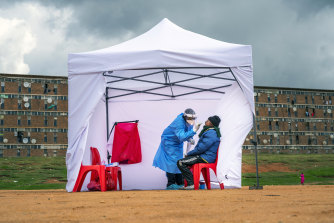 A resident from the Alexandra township gets tested for COVID-19 in Johannesburg, South Africa.Credit:AP

With a population of about 58 million, South Africa has the fifth-highest number of cases in the world, behind the US, Brazil, Russia and India, all countries with significantly higher populations, according to a tally by Johns Hopkins University.

South Africa's hospitals have been stretched to the limit, but the President said in a letter to the nation that the government was working with the "greatest urgency" to deliver adequate supplies of personal protective equipment to areas where shortages have been reported. South African authorities are also working to root out corruption in the purchase and distribution of medical equipment, he said.

South Africa's case fatality rate – the number of deaths as a proportion of confirmed cases – is at 1.6 per cent, significantly lower than the global average, said Ramaphosa.

South Africa also has a younger population than countries in Europe that were hard hit in the pandemic, and the virus kills elderly patients at a far higher rate than younger people.

Contacts being traced from COVID-stricken ship

At least 40 passengers and crew from a luxury cruise liner have tested positive for COVID-19, with authorities still trying to trace a number of passengers from two recent Arctic voyages, public health officials in Norway said on Sunday.

Four crew members on the MS Roald Amundsen were hospitalised on Friday when the ship arrived at the port of Tromsoe, and later diagnosed with the respiratory illness. Tests showed another 32 of the 158 staff were also infected. 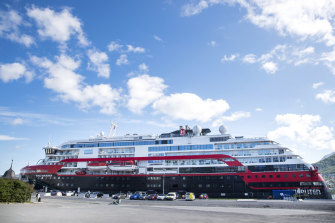 Hurtigruten’s MS Roald Amundsen, docked in Tromso, Norway on Sunday. Authorities are trying to trace passengers who have already left the ship.Credit:AP

While the crew was quarantined on the ship, the 178 passengers who arrived on Friday were allowed to disembark before anyone had been diagnosed, triggering a complex operation to trace them.

So far, four of the combined 387 passengers travelling on the ship on two separate cruises since July 17 have been carrying the virus, the Norwegian Institute of Public Health said.

The Hurtigruten line, owner of the MS Roald Amundsen, in mid-June became the first to return a cruise ship to service following a three-month halt due to the pandemic.

Among the infected crew, 32 were from the Philippines, with the rest Norwegian, French and German, operator Hurtigruten said.

At the start of coronavirus outbreak in early 2020, thousands of passengers became stranded on cruise vessels around the world. With reduced passenger capacity, social distancing and strict rules on hygiene, Hurtigruten aimed to persuade customers to return to the cruise industry.

The MS Roald Amundsen is scheduled to sail around the British Isles in September, docking at ports in England and Scotland.

Stricter controls in the Philippines

The Philippines said on Sunday it would reimpose a stricter lockdown in and around its capital for two weeks from midnight of August 4 as the country struggles to contain coronavirus infections that have jumped to more than 100,000 cases.

The move followed a call on Saturday by 80 local groups representing 80,000 doctors and a million nurses for tighter controls, saying the Philippines was losing the fight against the coronavirus and warning of a collapse in the healthcare system from soaring infections.

Seven Chinese health officials arrived in Hong Kong on Sunday, the first members of a 60-person team that will carry out widespread COVID-19 testing in the territory as it races to halt a third wave of illness.

The initiative marks the first time mainland health officials have assisted Hong Kong in its battle to control the epidemic.

The city has reported around 3500 coronavirus cases and 34 deaths since January, far lower than many other global metropolitan centres, but the daily number of new infections has been in three digits for the past 12 days.

Members of the testing team, co-ordinated by the Chinese government, are mostly from public hospitals in Guangdong province, China's National Health Commission said.

A group of local Hong Kong councillors said on Sunday that some local residents fear China may use their presence as an opportunity to collect DNA samples for surveillance purposes.

The territory's government denied the claims, saying virus testing would only be conducted in the city and samples would not be transported to the mainland.

In June, to widespread criticism in the West, Beijing imposed a security law on the territory to tackle what China defines as secession, subversion and collusion with foreign forces, punishable by up to life in prison.

Following a surge in locally transmitted coronavirus cases in July, the territory introduced curbs including restricting gatherings to two people and mandating face masks in all outdoor public spaces.