‘You smell like a toilet.’ The cruel dig Steve Jobs made to his daughter as he lay dying of cancer and how he once told her ‘you’re getting nothing’ when she asked to have his Porsche after he was done with it, memoir reveals 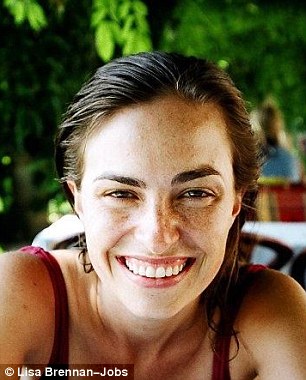 Steve Jobs told his daughter that she smelled ‘like a toilet’ during one of their last meetings together, her new memoir reveals.

The Apple founder made the cruel dig at Lisa Brennan-Jobs as he lay dying of cancer because he smelled the rose facial mist she had sprayed on herself.

In her new book, Small Fry, which is out September 4, Lisa reveals how her billionaire father once turned nasty and told her: ‘You’re getting nothing’ when she asked to have his Porsche when he was done with it.

‘You’re not getting anything, you understand?’ Jobs told her.

Lisa writes that Jobs spoke in ‘such a sour, biting way’ and that he once told ‘I’m one of the most important people you will ever know.’

Her memoir gives unprecedented detail about the troubled relationship with her father which was featured in the 2015 biopic about him with Michael Fassbender in the lead role.

She says that for her father, her very existence was a disappointment and a source of shame. 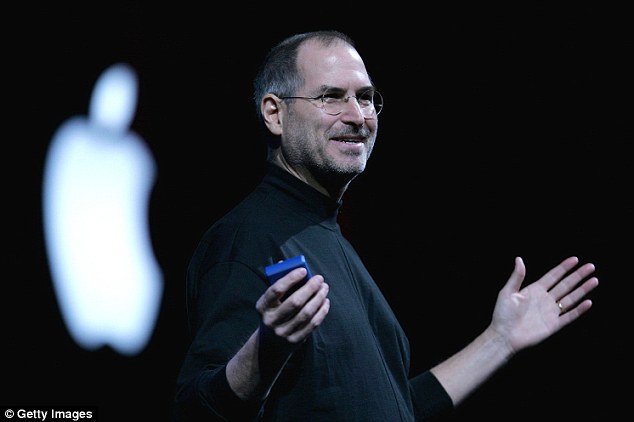 Steve Jobs, who died of pancreatic cancer in 2011, had denied being Lisa’s father and claimed he was ‘sterile and infertile’ 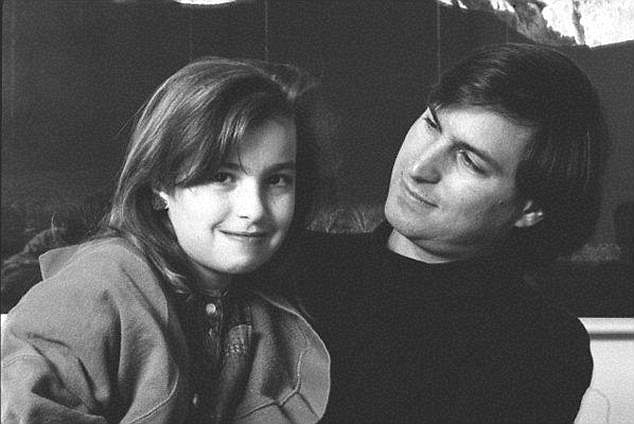 Lisa (pictured with her dad in an undated photo) says that for her father, her very existence was a disappointment and a source of shame

As she puts it, in his eyes she was a ‘blot on a spectacular ascent, as our story did not fit with the narrative of greatness and virtue he might have wanted for himself.’

She writes: ‘My existence ruined his streak. For me, it was the opposite: the closer I was to him, the less I would feel ashamed; he was part of the world, and he would accelerate me into the light.’

Lisa, now 40, was born in 1978 after Jobs had a five-year relationship with her mother Chrisann Brennan which ended when she became pregnant.

Acrimony and a court case followed during which Jobs took a paternity test and still denied that he was Lisa’s father.

Jobs, who died in 2011, even claimed that he was ‘sterile and infertile’ yet went on to have three children with his wife Laurene Powell.

Jobs finally reconciled with Lisa and apologized when she was nine years old, but the wounds of his behavior never really healed and the two had a strained, difficult relationship.

In an excerpt of Small Fry in Vanity Fair magazine, Lisa writes about how she used to tell her school friends: ‘I have a secret, my father is Steve Jobs’. 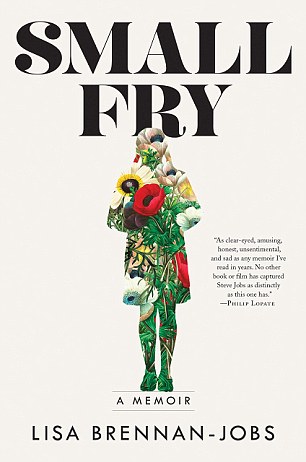 Small Fry, published by Grove Books, will be released  September 4, 2018

She told them that her father had named an early Macintosh computer after her.

She would boast to friends saying: ‘He’s famous. He invented the personal computer. He lives in a mansion and drives a Porsche convertible. He buys a new one every time it gets a scratch’.

‘For a long time I hoped that if I played one role, my father would take the corresponding role,’ she writes.

‘I decided that if I acted like other daughters did, he would join in the lark. We’d pretend together, and in pretending we’d make it real.

‘If I had observed him as he was, or admitted to myself what I saw, I would have known that he would not do this, and that a game of pretend would disgust him’.

During one visit to Jobs’s house Lisa plucked up the courage to ask her father about his Porsche and said: ‘Can I have it when you’re done?’

Jobs replied: ‘Absolutely not’. Lisa writes that, judging by his reaction, she thought the story she’d been told about him replacing it after a scratch wasn’t true.

But worse was to come.

She writes: ‘I wished I could take it back. We pulled up to the house and he turned off the engine. Before I made a move to get out he turned to face me.

‘You’re not getting anything’, he said. ‘You understand? Nothing. You’re getting nothing’.

‘Did he mean about the car, something else, bigger? I didn’t know. His voice hurt – sharp, in my chest. The light was cool in the car, a white light on the roof had lit up when the car turned off. Around us was dark. I had made a terrible mistake and he’d recoiled’. 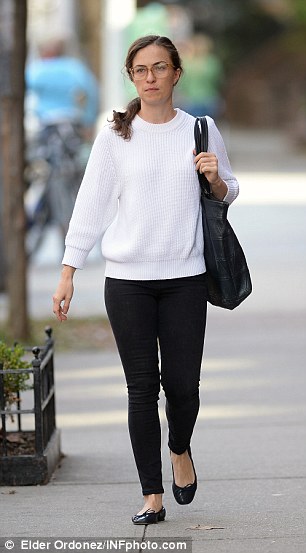 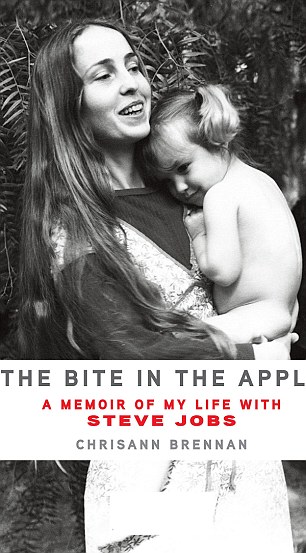 Lisa, now 40, was born in 1978 after Jobs had a five-year relationship with her mother Chrisann Brennan (pictured right) which ended when she became pregnant. Chrisann has also written about her tumultuous relationship with Jobs in her memoir

Describing one of her last visits to her father three months before his death, Lisa writes that he was bizarrely urged to touch his feet by Segyu Rinpoche, a Brazilian Buddhist monk who Jobs had turned to for comfort.

Jobs fell asleep and Lisa walked around the house, thinking to herself that she had ‘given up on the possibility of a grand reconciliation’.

Before saying goodbye she went to the bathroom where she found the rose facial mist that she sprayed on herself. She went in to see her father and told him: ‘I’ll be back soon’.

As she was pulling away Jobs said: ‘Lis?’ She replied: ‘Yeah?’ Jobs said: ‘You smell like a toilet’.

Jobs and Lisa’s mother had met in 1972 at the age of 17 when they were both students at Homestead High School in Cupertino, California.

They split in 1977 when Chrisann became pregnant and when Lisa was born Jobs denied he was the father.

Chrisann supported herself and Lisa by working as a cleaner, a waitress, and a babysitter at a church.

By the time Lisa was seven they had moved 13 times.

In her memoir, Lisa writes that she was forced to take a DNA test in 1980 under the orders of the district attorney of San Mateo County, California, who had sued her father for child support payments. 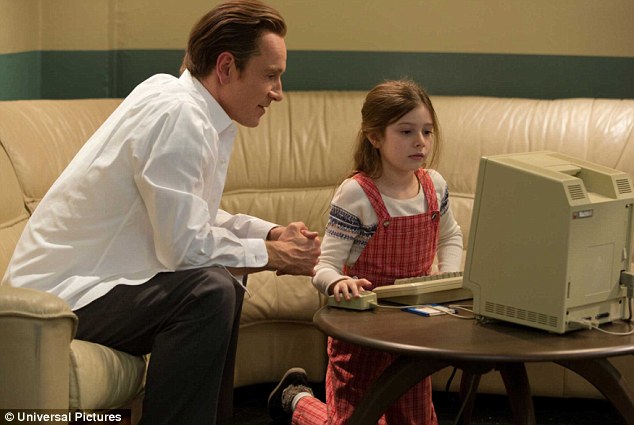 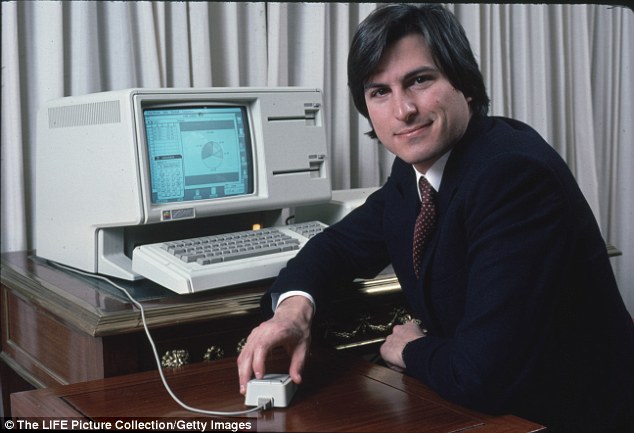 Lisa reveals how Jobs even refused to admit he named the Lisa Macintosh computer after her, telling her, ‘Nope. Sorry kid’. He came clean years later when she was 27 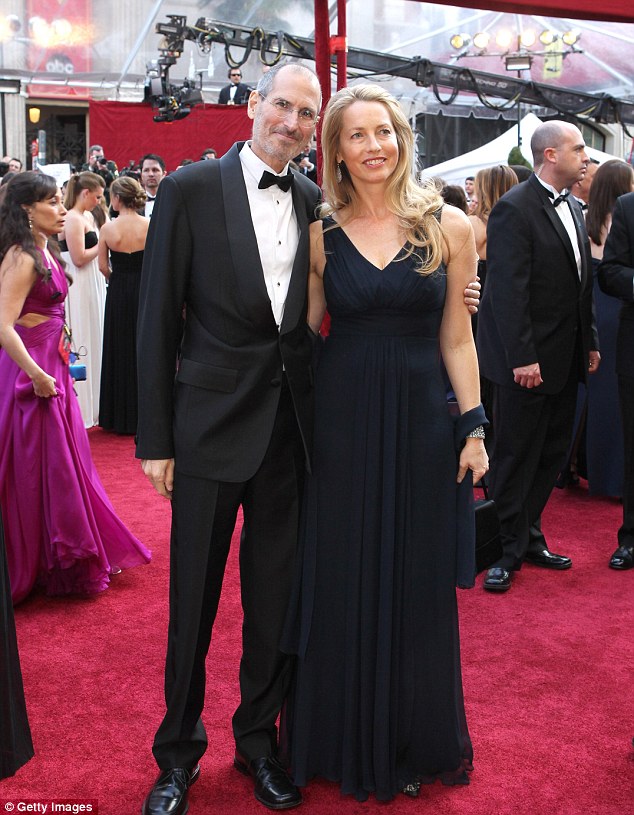 Jobs married Laurene Powell in 1991 and had three kids. The Apple founder allegedly proposed to his wife but only bought her a ring after she moved out

Four days after the case was finished on December 8, 1980, Apple went public and overnight Jobs became worth more than $200 million.

Jobs visited Lisa around that time – she was three years old – and asked her: ‘You know who I am?’ He added in a voice which Chrisann described as being ‘like Darth Vader’: ‘I’m your father’.

Jobs said: ‘I’m one of the most important people you will ever know’.

Starting from the age of seven Jobs would visit Lisa once a month; he turned up in a black convertible Porsche and would go roller skating around the neighborhood with Lisa and Chrisann as they tried to paper over the many cracks in their relationship.

Lisa writes that she ‘anticipated his arrival and thought about him afterwards’ but for the first hour they were together there was a ‘strange blankness.’

She writes: ‘He didn’t talk much. There were long pauses, the thunk and whir of roller skates on pavement. A few times, I felt his eyes on me; when I looked up, he looked away.’

Lisa writes that despite all of this she still felt pride that she was his daughter.

She writes that her connection to him was a ‘magical identity, an extra thing that started to itch and tingle when I felt small, and it was like pressure building inside me, and then I had to find a way to say it’.

Lisa repeatedly tried to get Jobs to tell her that the Lisa Macintosh computer was named after her. After she asked one time he said: ‘Nope. Sorry kid’.

It was only when she was 27 and on holiday at a villa in the South of France owned by U2 singer Bono that Jobs finally came clean.

Over lunch Bono asked Jobs about the early years of Apple and whether or not he named the Lisa after his daughter.

In 2013, two years after Jobs died, Chrisann published her memoir called: ‘The Bite in the Apple: A Memoir of My Life With Steve Jobs’.

In the unflattering book, she claimed that success turned Jobs into a ‘demon’ and that she became the ‘object of his cruelty’.

In 2005 she sent him a letter asking him for $30 million for a trust fund for herself and Lisa as compensation for raising their daughter.

In one letter she wrote: ‘I believe that decency and closure can be achieved through money. It is very simple’.

Jobs ignored her demand and later emails and in a terse reply said: ‘I don’t react well to blackmail. I will have no part in any of this.’

Chrisann was not the only woman who was enraged by Jobs’s unreasonable behavior.

Tina Redse, the first woman he loved, has said that when she found the description of Narcissistic Personality Disorder in a psychiatric manual she diagnosed Jobs as a classic case.

At one point she wrote ‘neglect is a form of abuse’ on the hallway to their bedroom.

Jobs also enraged Laurene Powell by proposing then saying nothing about it for months – only when she moved out did he buy her a ring.

In one interview Walter Isaacson, who wrote Jobs’s official biography, said: ‘He’s not warm and fuzzy. He was very petulant, he was very brittle.

‘He could be very, very mean to people at times.’

Small Fry will hit the stands on September 4, 2018 and is available for pre-order on Amazon