The federal government will arrange for a further 20 international repatriation flights to bring stranded Australians home, following a decision by Emirates to suspend all flights to and from Sydney, Melbourne and Brisbane.

The announcement follows the national cabinet's decision to significantly reduce the cap on international arrivals via commercial flights by 50 per cent until mid-February, following concerns that the hotel quarantine system will be challenged by the more virulent British strain of the coronavirus.

Speaking to reporters on Saturday, Finance Minister Simon Birmingham said 446,000 Australians had been able to return home since March 2020 and the federal government had organised 90 flights to assist. 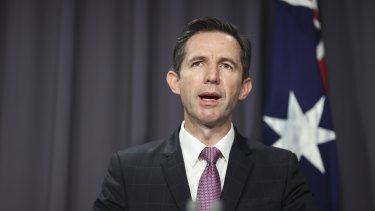 Senator Birmingham acknowledged the border restrictions put in place early last year had made it difficult for many people and said the additional 20 flights over the next couple of months would help.

"These flights will fly from priority areas from around the world, making sure that the Department of Foreign Affairs and Trade off of their intelligence and knowledge of where Australians most need assistance, target those flights," he said.

The passengers will be in addition to the caps on commercial flight passengers. 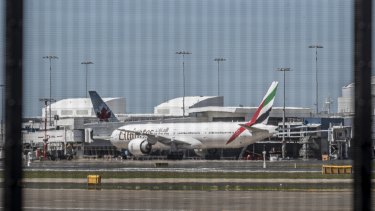 The announcement comes after Emirates pulled out of Australia. Credit:Brook Mitchell

The additional arrivals will be directed to the Howard Springs quarantine facility in the Northern Territory, Canberra and Tasmania and would happen according to strict protocols to keep Australia safe.

The United Arab Emirates carrier was conducting daily flights between Dubai and Sydney and Melbourne and five flights a week to Brisbane, meaning the decision will wipe out 19 flights per week for Australians in Europe and the Middle East who have been waiting months to get home.

The airline only flies Airbus A380s and Boeing 777s – two of the largest modern planes in the industry.

Responding to the decision by Emirates to suspend flights to and from Sydney, Melbourne and Brisbane, Senator Birmingham said it was a commercial decision by the airline and the places under the arrivals cap would be available to other carriers.

Qatar Airways, Etihad Airways, Singapore Airlines and Japan Airlines are still running flights to Australia for people in Europe but the cap reduction has already led to some cancellations and delays.

Stay across the news you need to know related to the pandemic. Sent Monday and Thursday. Sign up here.