India launches world’s biggest covid jab effort to inoculate 300 million of its 1.3 billion people by July – as patients are FUMIGATED while waiting for vaccine

India today launched the world’s biggest covid jab effort to inoculate 300 million of its 1.3 billion people by July – a target which dwarfs the British population by more than four times.

An army of 150,000 specially trained staff have been deployed to dole out the vaccines across 700 districts after several dry runs to improve their tactics.

On day one around 300,000 people, including medics, over-50s and those deemed high-risk, were given their first of two doses. 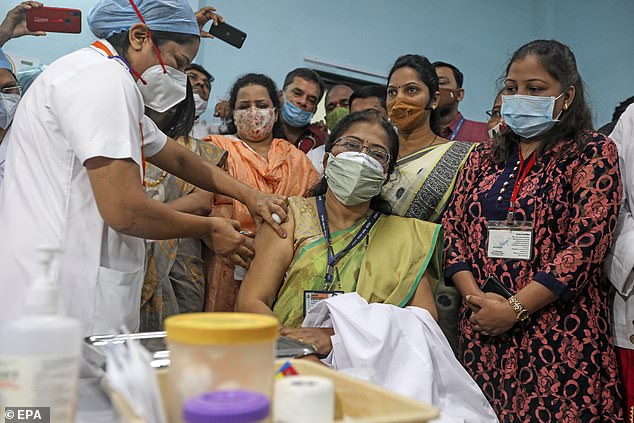 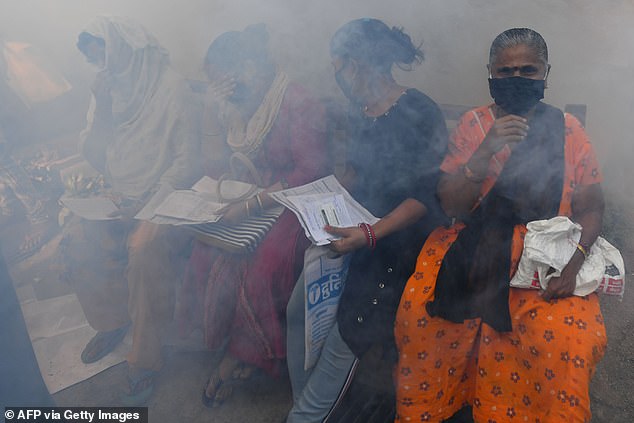 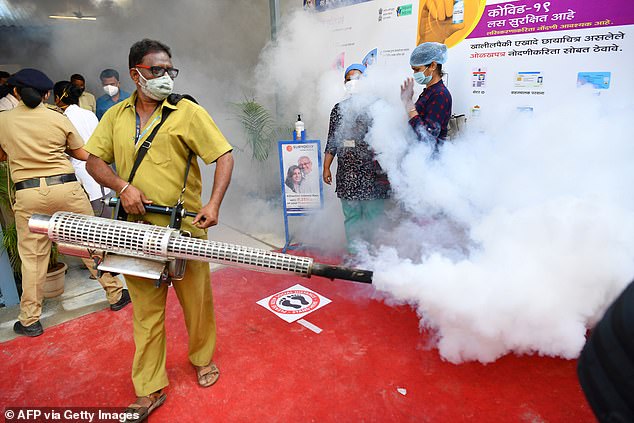 ‘Normally, it takes many years to make a vaccine but in such a short span of time, not one, but two ‘Made in India’ vaccines are ready,’ Modi said.

‘The world has immense faith in India’s scientists and capacity of vaccine production.’

Authorities are drawing on their experience with elections and child immunisation programmes for polio and tuberculosis in rolling out the vaccine.

About 150,000 staff in 700 districts have been specially trained, and India has held several national dry runs involving mock transportation of vaccines.

But in an enormous, impoverished nation with often shoddy transport networks and one of the world’s worst-funded healthcare systems, it is still a daunting undertaking.

Regular child inoculations are a ‘much smaller game’ and vaccinating against Covid-19 will be ‘deeply challenging’, said Satyajit Rath from the National Institute of Immunology.

Both vaccines approved so far need to be kept refrigerated at all times, and others being developed will need to be stored at ultra-low temperatures too.

To account for this, India has readied tens of thousands of refrigeration tools – including 45,000 ice-lined refrigerators, 41,000 deep freezers and 300 solar refrigerators.

They will be sorely needed when India’s scorching summer rolls around.

But in one recent exercise in rural Uttar Pradesh a health worker was pictured transporting boxes of dummy vials on his bicycle.

There are also concerns about plans to manage the entire process digitally via India’s own app, CoWIN – of which there are already several fake versions.

During one recent practice in IT hub Bangalore, workers at one health centre had to use a cellphone hotspot to go online because their network was down.

Authorities also need to make sure that vaccine doses do not ‘go missing’ and end up being sold on India’s large black market for medicines.

More than 150,000 Indians have died from Covid-19 and the economy is one of the worst-hit worldwide, with millions losing their livelihoods.

New infection rates have fallen sharply in recent months but experts are concerned a new wave might hit, fuelled by a string of recent mass religious festivals. 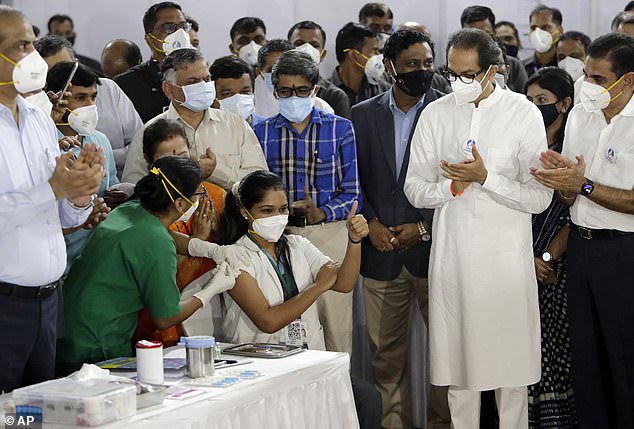 Madhura Patil, a health worker, gestures as she receives COVID-19 vaccine in the presence of Uddhav Thackeray, standing in white dress, Chief Minister of Maharashtra State in Mumbai 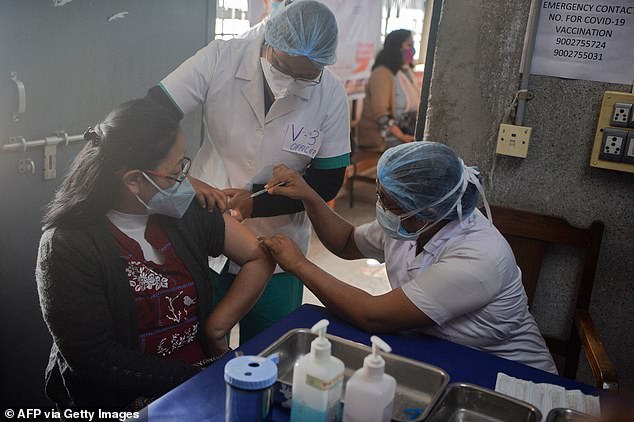 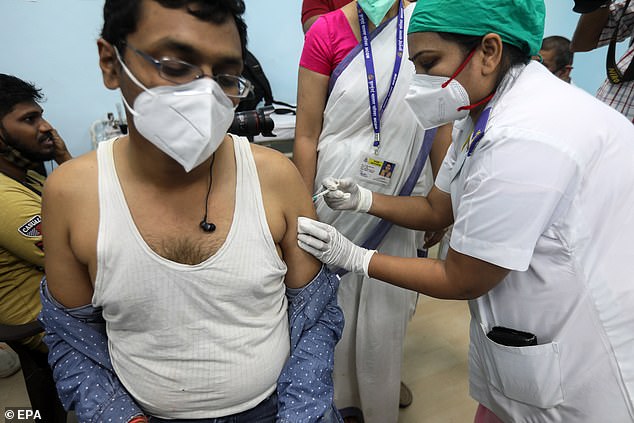 A patient gets the first dose of a Covid-19 vaccine shot, manufactured by Serum Institute of India, inside Vaccination Centre at Rajawadi Hospital in Mumbai 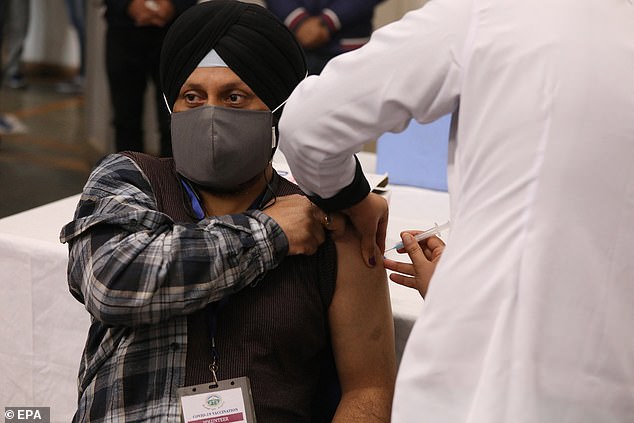 A man receives his first of two jabs on Saturday 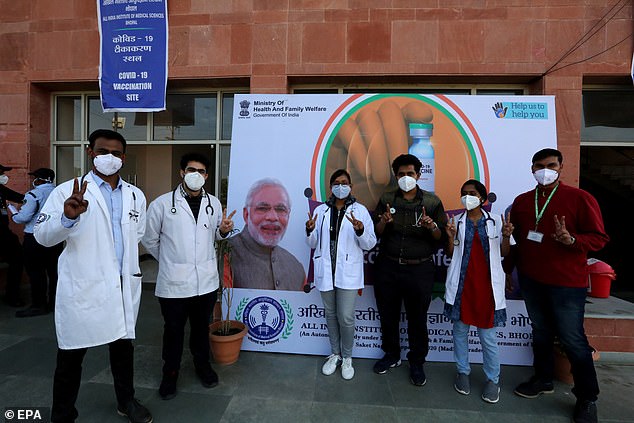 And as in other countries, there is scepticism about the vaccine, fuelled by a torrent of hoaxes and baseless rumours online about the virus.

For example, multiple Facebook and Twitter posts shared hundreds of times – debunked by AFP Fact Check – claimed no vegetarian had died from Covid.

Others accused India’s Muslim minority of deliberately spreading the virus with hashtags like ‘#CoronaJihad’, or denounced the pandemic as a cover for a plan to implant trackable microchips.

‘I would rather wait and watch and see how it goes with the frontline workers who are being vaccinated first,’ banker Sushma Ali, 54, told AFP.

Anecdotal evidence suggests that approval of Indian giant Bharat Biotech’s vaccine Covaxin without data from Phase 3 human trials – as well as the death of a trial participant – has further eroded trust in the inoculation drive. 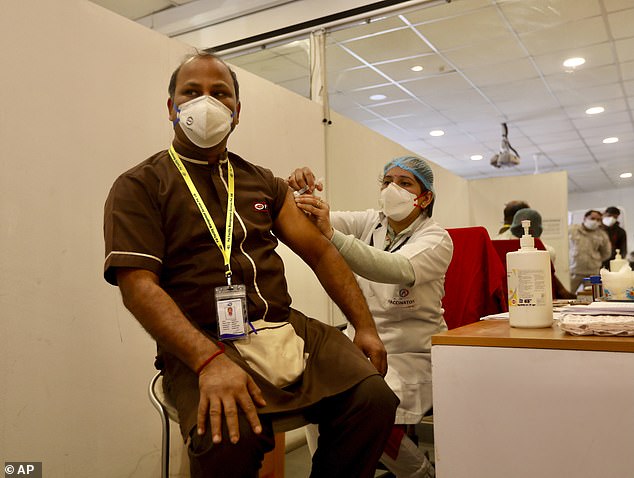 A health worker, left, receives a COVID-19 vaccine at a private Hospital in New Delhi, India 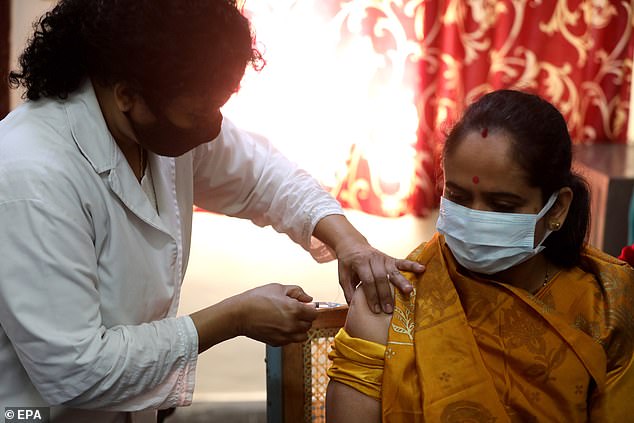 A patient gets the first dose at Jai Prakash Narayan Hospital in Bhopal, Saturday 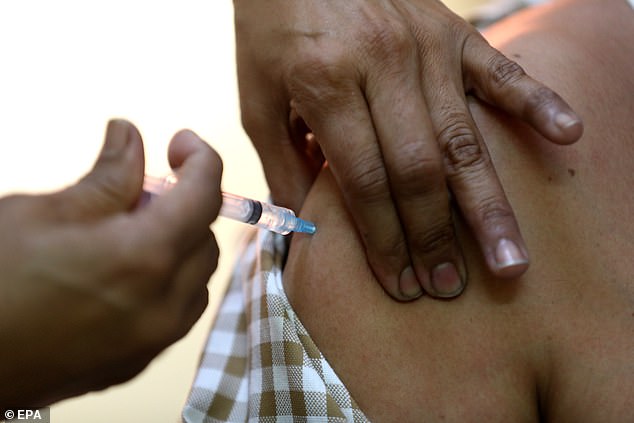 A beneficiary gets the first dose of a Covid-19 vaccine shot, manufactured by Serum Institute of India, inside Vaccination Centre at calling Jai Prakash Narayan Hospital in Bhopal, India 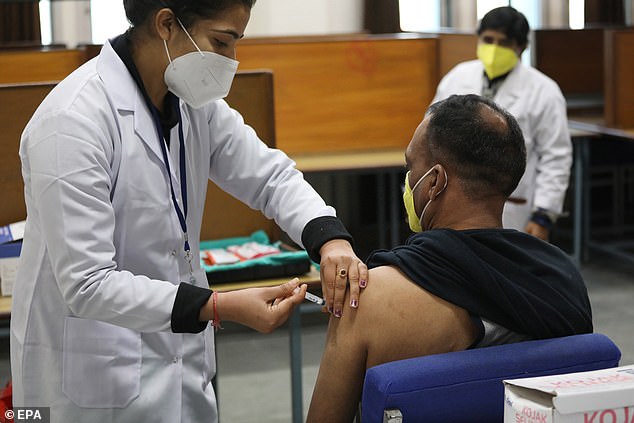 With Covaxin still in ‘trial mode’, Indians being given the vaccine on Saturday were being asked to sign consent forms.

The other jab to be given approval is Covishield, a version of AstraZeneca and Oxford University’s shot made by India’s Serum Institute, the world’s largest vaccine manufacturer.

‘I think it is all very fishy,’ said housewife Prerna Srivastava, 41. ‘Let the politicians get the vaccine first.’

‘The problem is that no one trusts this government,’ echoed father-of-five Liaquat Ali, 51, in Mumbai.

‘I have no idea when I or my family will get the vaccine, it will take at least a year, since this is a huge country. Eventually everyone will get it but the rich will get it first.’