Washington: South Africa's teachers were at an all-too-familiar impasse. In July, novel coronavirus cases were on the rise, as was government pressure to reopen schools. Educators concerned about safety pushed back.

As negotiations faltered, the country's largest teachers union threatened to strike unless the start date was delayed. 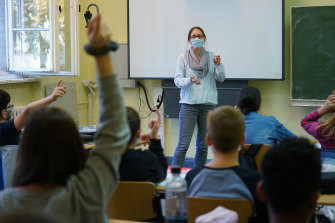 Teacher Julia Rakow wears a protective face mask as she leads a class in the origins of German poetry at Sophie-Charlotte Gymnasium high school in Berlin, Germany earlier this month. Credit:Getty Images

"The employer is always more powerful," Mugwena Maluleke, the general secretary of the South African Democratic Teachers Union, said. "To balance that inherently unequal relationship, there has to be a strike, to break the deadlock and go back to the table as equal partners."

This time, the strike was averted. The government agreed to delay reopening and to a framework for relocating teachers and student from schools that could not meet precautionary criteria, Maluleke said.

From picket lines, to Zoom calls, and even jail cells, the pandemic has thrust teachers unions to the forefront of the debate over education in the age of coronavirus. How to safely reopen schools has become a central question, with school closures affecting well over a billion students, according to the United Nations, in addition to economies and daily life for working families.

Around the world, there has been "a lot of brinkmanship" with governments, said David Edwards, the general secretary of Education International, a Brussels-based international federation of teachers unions. "Teachers unions are trying to find a way to get their kids safely back to school."

During the pandemic, most near-strikes never came to pass, said Edwards. When strikes proceeded, questions around reopening were rarely the only impetus, with the pandemic bringing to the forefront pre-existing grievances. 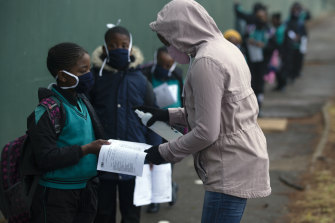 Students go through the regular morning checks on their arrival at the Melpark Primary School in Johannesburg, earlier this month. Credit:AP

Public sector teachers unions around the world vary widely in role and makeup, shaped in part by local regulations, state-labor relations and the climate for political dissent. But a common thread ties many of them together: opposition to policies that have eroded public education, said Ellen David Friedman of Labour Notes, a Detroit-based grass roots labor organisation.

"We are now at a crisis moment where all over the world people are realising the centrality of public education," she said. "Teachers unions are the last line of defence."

Edwards said he has observed three trends among his organisation's global affiliates.

In places with "high trust, high dialogue" – including Argentina, New Zealand and Scandinavian countries – teachers "haven't needed to resort to industrial action," he said. Instead, they have been in continuous talks with policymakers over when and how to reopen schools, and related issues like sick pay and overtime.

In Britain, France, Germany and Greece, among other countries in Europe, some unions have been very vocal in opposition to official plans.

In countries with "a history of lack of dialogue and consultation with the government," teachers have been more likely to threaten or resort to strikes, he said.

South Africa's SADTU is aligned with the country's ruling party, African National Congress (ANC), but also has a history of confrontation and playing a role in national politics. In Burkina Faso and Mali, teachers were striking for better pay when the virus arrived and added to concerns. In Zimbabwe, already in a period of political flux, teachers unions successfully sued to prevent schools restarting in June. 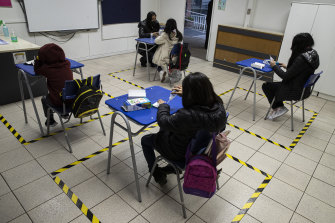 Tape marks each person’s space to assure social distancing at a public school that has been repurposed as a daycare for minors with working parents in Santiago, Chile.Credit:AP

Then there are countries, including Brazil, Chile and the Philippines, where teachers have been "really butting heads with a government that is also pushing forward labor reforms taking away a lot of their rights," said Edwards. In some cases, governments have moved to label teachers as "essential" workers to mandate they return to classrooms.

The 1.7 million-member American Federation of Teachers has authorised unions nationwide to strike if their demands, including billions of dollars in emergency federal funding to ensure schools are safely equipped, are not met.

For Jordan's independent teachers union, the pandemic has been a bust.

In July and August, Jordanian authorities arrested around 1000 teachers as it cracked down on the country's largest independent trade union. The 140,000-member body had been leading waves of anti-government protests spurred by a pay freeze. By summer's end, Jordanian authorities shut the Jordan Teachers' Syndicate headquarters and dismissed and replaced its elected leadership.

The conflict preceded the pandemic: Independent unionising in Jordan is rare, as the government seeks to co-opt any opposition. But the independent teachers union was a byproduct of the Arab Spring, a series of protests and uprising that swept the region around 2011, and last year it held the country's longest public-sector strike over demands for higher pay, among others. The government caved – then reneged.

This spring, without consultation, the government froze salary raises for public sector workers, teachers included, as the virus-hit economy contracted. Teachers collectively took to the streets. The state, using its extensive emergency powers, responded with force, alongside media gag orders and criminal proceedings.

Elsewhere, tensions have built without yet coming to a head. In Madrid, the epicentre of Spain's outbreak, teachers union, unions representing teachers and others say a strike is possible if the regional government does not meet demands for more clarity – such as what safety guidelines, teacher protections and classroom restrictions will be required – as students return to the classroom.

In Denmark, in contrast, "co-operation between teachers, the unions and local authorities" led to smooth reopenings, Dorte Lange, vice president of the Danish Union of Teachers, told NPR in August.

"We were able as teachers' trade unions to have a close cooperation with our government and with our employers," Lange said. "And they listened to our worries, and they took them into consideration."