Squirrels are like human parkour athletes when it comes to jumping from one place to another at speed, a new study shows.

Researchers in California filmed squirrel movements as the creatures worked their way around a homemade outdoor obstacle course.

The adorable critters invent ‘parkour-like’ maneuvers as they go to achieve particularly difficult landings, according to the findings.

They can expertly reorient their bodies to push off vertical surfaces during tricky jumps between branches in the quest for nuts, the study shows.

The athletic and dangerous art of parkour involves running, jumping, climbing and quadrupedalism (using all four limbs) while moving through various terrain. 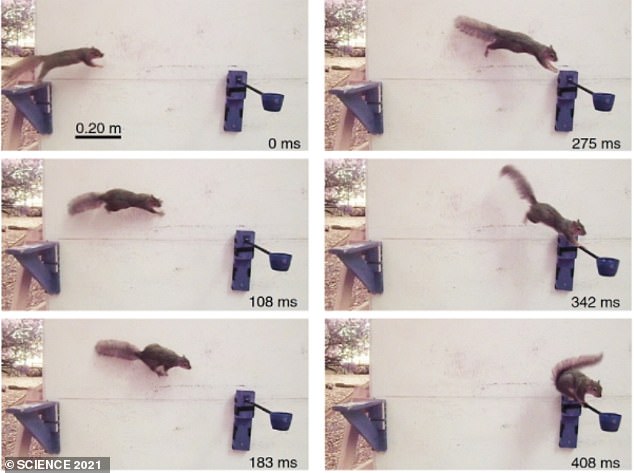 THE ART OF PARKOUR

Originally termed Art du Deplacement, it was founded in France in the 1980s by a group of nine men.

It involves running, jumping, climbing and quadrupedalism (using all four limbs) while moving through various terrain.

According to professional parkour athlete Lorena Abreu, parkour is more functional and efficient than ‘freerunning’, which is more about creative flips and trips, although the two terms are used interchangeability.

Understanding how squirrels learn the limits of their agility could help build robots with better control that can nimbly move through varied landscapes, according to the scientists.

This could help search the rubble of a collapsed building in search of survivors or to quickly access an environmental threat.

‘As a model organism to understand the biological limits of balance and agility, I would argue that squirrels are second to none,’ said study leader Nathaniel Hunt, a former doctoral student at the University of California, Berkeley.

‘If we try to understand how squirrels do this, then we may discover general principles of high performance locomotion in the canopy and other complex terrains that apply to the movements of other animals and robots.’

Hunt and his team report a wide repertoire of agile landing maneuvers in the squirrels, as well as adaptive ‘parkour’ behaviours that allow the animals to perform challenging leaps.

In its quest to take a nut from a researcher’s hand, one squirrel is seen springing onto a the wall in a parkour-like fashion before launching itself once more.

In a slow motion replay, the squirrel looks like it’s defying gravity as it ‘sticks’ to the vertical surface for a split second.

The creatures can perform corrective adjustments ‘on-the-fly’ even if they’ve misjudged the situation, according to Hunt.

‘If they leap into the air with too much speed or too little speed, they can use a variety of landing maneuvers to compensate,’ he said.

‘If they jump too far, they roll forward around the branch. If they jump short, they will land with their front legs and swing underneath before pulling themselves up on top of the perch.

‘This combination of adaptive planning behaviours, learning control and reactive stabilising maneuvers helps them move quickly through the branches without falling.’

Squirrels spend most of their time high in the trees – an unpredictable environment that requires them to nimbly navigate a tangled maze of branches to travel, nest and avoid predators.

However, it isn’t well understood how squirrels learn to gauge and adjust their movements in split-second timing, while making potentially life-threatening decisions.

They watched as the wild squirrels jumped between simulated branches and across gaps of various distances while being enticed with nuts. 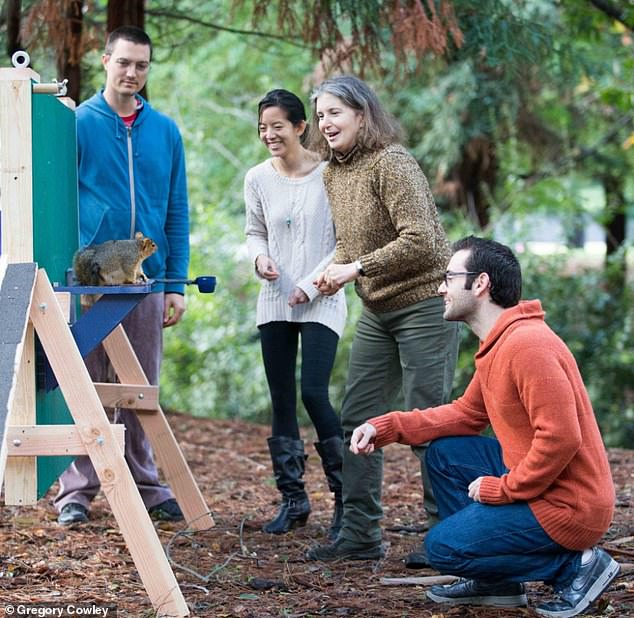 Compliance is a term used in physics and the science of motion.

It refers to the property of a material of undergoing elastic deformation or change in volume when subjected to an applied force.

Materials with low compliance have have good resistance.

Over a series of experiments, the authors discovered that leaping squirrels quickly learned to modify their jumping behaviour over repeated jumps.

As expected, the flimsier or more compliant the branch from which squirrels had to leap, the more cautious they were.

‘We found that free-ranging fox squirrels (Sciurus niger) leaping across unfamiliar, simulated branches decided where to launch by balancing a trade-off between gap distance and branch-bending compliance,’ say the authors in their paper.

The compliance of the branch was six times more critical than the gap distance in deciding whether to jump, they found.

This may be because squirrels know that their sharp claws will save them if they miscalculate a jump.

Their claws are so failproof, Hunt said, that none of the squirrels ever fell, despite wobbly leaps and landings that went shy or too far of the mark.

‘They’re not always going to have their best performance – they just have to be good enough,’ Hunt said. 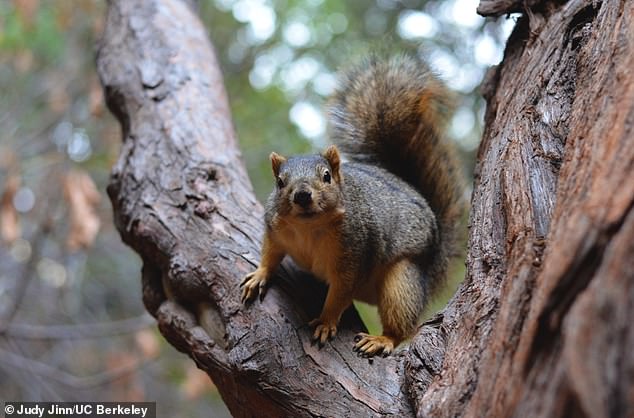 For squirrels navigating their tree-tops, mistakes can result in fatal falls, so they have to constantly consider trade-offs between branch bendiness and the distance between branches

‘They have redundancy, so, if they miss, they don’t hit their center of mass right on the landing perch, they’re amazing at being able to grab onto it.

Altogether, the findings demonstrate a ‘synergy’ between biomechanical energy management and trial-and-error learning that determines the animal’s navigation through canopy.

‘Just as movement in the real world requires flexibility and creativity, researchers studying natural locomotion must be as ingenious as their natural animal subjects,’ write Karen Adolph and Jesse Young in a related Perspective.

‘The trick is to capture movement in all its complexity while retaining sufficient experimental control and measurement fidelity. The study of Hunt et al. is a beautiful example.’

The study, entitled ‘Acrobatic squirrels learn to leap and land on tree branches without falling’, has been published in the journal Science.

Squirrels that have good neighbours live longer because they spend less time defending their territory and more time gathering food and raising pups, a 2020 study revealed.

Everybody needs good neighbours – and for North American red squirrels, having friends next door from year-to-year improves the odds of survival and reproduction.

UK experts studying squirrels in the Yukon, Canada, found that keeping the same neighbours was so beneficial it outweighed the drawbacks of getting a year older.

Squirrels that live in adjacent territories in successive years appear to grow to trust each other, meaning that they end up spending less time defending their territory.

This, in turn, frees up more time to gather food and raise young.

In contrast, living near relatives did seem to not improve the red squirrel’s survival rates – but this could just be due to the study’s sample area.

Read more: Squirrels survive longer when they grow to trust their neighbours