Earlier this week, The Age spoke to five VCE students about their experiences this year and hopes for results day. On Thursday, we witnessed them receiving their ATARs and making plans for the future.

Maanya is now rethinking her plans after blitzing the VCE with an ATAR of 99.6, including a perfect score in legal studies.

“That’s … wow. I didn’t expect anything like that,” the Fintona Girls’ School graduate said. 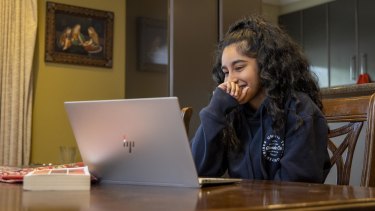 Maanya’s first choice for 2022 is a commerce/law degree at Monash University.

“I think I needed about a 97 or a 98 for my course,” she said. “I was relying on the fact that I would get into one course and wouldn’t have to make a decision. But now I have to decide.”

Her father, Dr Ajay Kapoor, said he would grin all day at his daughter’s achievement. Her mother’s response: “Out of this world.”

After a turbulent two years, Laurence has managed to end his high school journey on a high, achieving an ATAR of 99.75, a result that will set him up well for 2022.

He wants to study medicine at Monash University, following in the footsteps of his mother, who is an obstetrician. 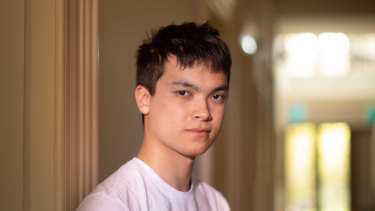 “These past few years have cemented how much doctors are needed and I just want to be a part of that,” he said.

“As much as you tell yourself that it isn’t the be-all and end-all, it is some sort of culmination of your time at school, so it is just relieving to know that I got about what I wanted.”

Opening her results at 7am, she broke out in a beaming smile. 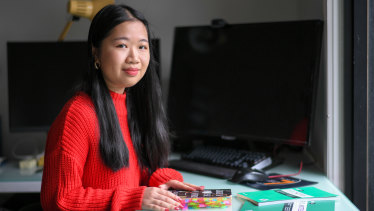 Victoria surpassed her goal, achieving an ATAR of 97.90.

“I’m just so relieved, so happy. I don’t believe what I am seeing right now.”

After an uncertain and challenging two years, the closure felt strangely foreign to Victoria.

“At times [the VCE] felt like an endless tunnel. It feels strange to have finally finished,” she said.

Preimi Raveendiran was up at 5.30am baking doughnuts to distract herself from her thoughts about what was to come on Thursday morning.

But she needn’t have worried. Preimi achieved an ATAR of 95.75, an effort the 18-year-old said she was proud of after a “messy” year. 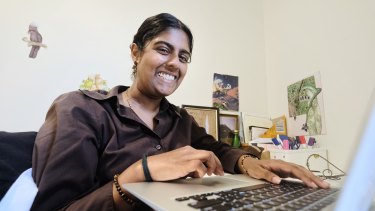 “It was just an unexpected year. Effort, emotions, everything just kept fluctuating, I tried to push through.”

The University High School graduate was not surprised at her score, as she used grade calculators throughout the year to track what her final results might be.

Preimi has been offered early acceptance into a Bachelor of Laws at Australian National University in Canberra.

Thomas Carr College student Mia Bellet said she was “feeling good” about her ATAR of 84.60 after opening her VCE results at 7am this morning.

Mia said her results “fit perfectly” with her 2022 plans to enrol in a Bachelor of Communications at RMIT, which requires an ATAR of 80 or above. 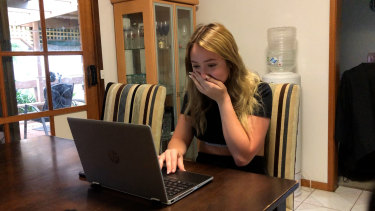 Mia cried tears of joy when she saw her raw study score of 40 for English literature. “That was my goal,” she said, adding that it was her “best subject”.

Mia described her year of COVID-19 restrictions and remote learning as tough and said she was feeling “really great” to have it behind her.