There are limits to Tiger Woods’ ability to work miracles. Somewhere. There have to be, right?

Woods won’t win the PGA Championship. He might not ever win a tournament again. But he’s staying in the fight long after so many others would have quit.

Fifteen months after a devastating car wreck that nearly cost him his leg, six weeks after his return to competitive golf at Augusta, one day after a round at the PGA Championship that started hot but stalled late, Woods fought through one of the tougher rounds of his career to make the cut with a stroke to spare.

One shot over the cut line with seven difficult holes to play, a visibly pained Woods carved up the last stretch of Southern Hills, playing the final stretch at -2 to give himself breathing room — and some extra rest — heading into the weekend.

Throughout Woods’ career, through swing changes and caddie changes and trophies and scandals, what’s remained consistent is his tenacity. He simply doesn’t give up in the face of injury, battling through ailments and woes that would have ended the tournaments — or careers — of other players. From the 2008 U.S. Open he won on a broken leg to the 2019 Masters he won after multiple knee and back surgeries to this week, Woods has always shown a monomaniacal determination to continue his career on his own terms.

“I’m not going to be playing a lot of tournaments going forward,” Woods said. “They’re going to be the biggest tournaments. I want to be able to play the major championships. I’ve always loved playing them.”

Playing alongside Rory McIlroy, who was seeing his Thursday lead slip away, and Jordan Spieth, who was struggling to find any kind of form, Woods was fighting his own private battles late Friday afternoon. Playing with zero margin for error, he grimaced throughout the afternoon, particularly late in the round as he approached the toughest holes on the course.

The turning point for Woods came after the 11th, where he doubled the short par 3 to fall to +5, one over the cut line with just seven holes remaining. But the next three holes were a master class in strategic, nervy golf — Woods rolled in two 14-plus-foot putts to save pars on 12 and 14, and took advantage of the last par 5 on the course, the 13th, to gain a stroke and get back on the high side of the cut line.

Woods overcooked his approach on the 15th, ending up in one of Southern Hills’ treacherous, gritty bunkers. But again, Woods found a touch that so many other players have lacked in the bunkers, flicking the approach to within three feet of the hole. One hole later, he unveiled his finest iron shot of the week, dropping his approach to within four feet of the cup for a birdie attempt. He drained it with authority, giving himself a one-shot cushion going into the final two holes.

On 17, Woods again got shaky on approach, flying the green and landing in the fringe. But once again, Woods pitched out of real trouble and rolled in a knee-knocker of a par putt, then clenched his jaw in pain as he walked off the green.

That left him with one hole left, and he made the 18th — one of the hardest on the entire course — look routine, with a straightforward drive-approach-two-putt. He walked off the course weary but satisfied. The mountains he conquers may not be as high these days, but he’s still driving forward, step by limping step.

“Coming back here to a place that I’ve had success on, to play against the best players in the world, that’s what we all want to be able to do,” said Woods, who won the 2007 PGA Championship at Southern Hills. “Fortunately enough, I’m able to somehow do it. I’ve had a great PT staff that have put Humpty-Dumpty back together.” 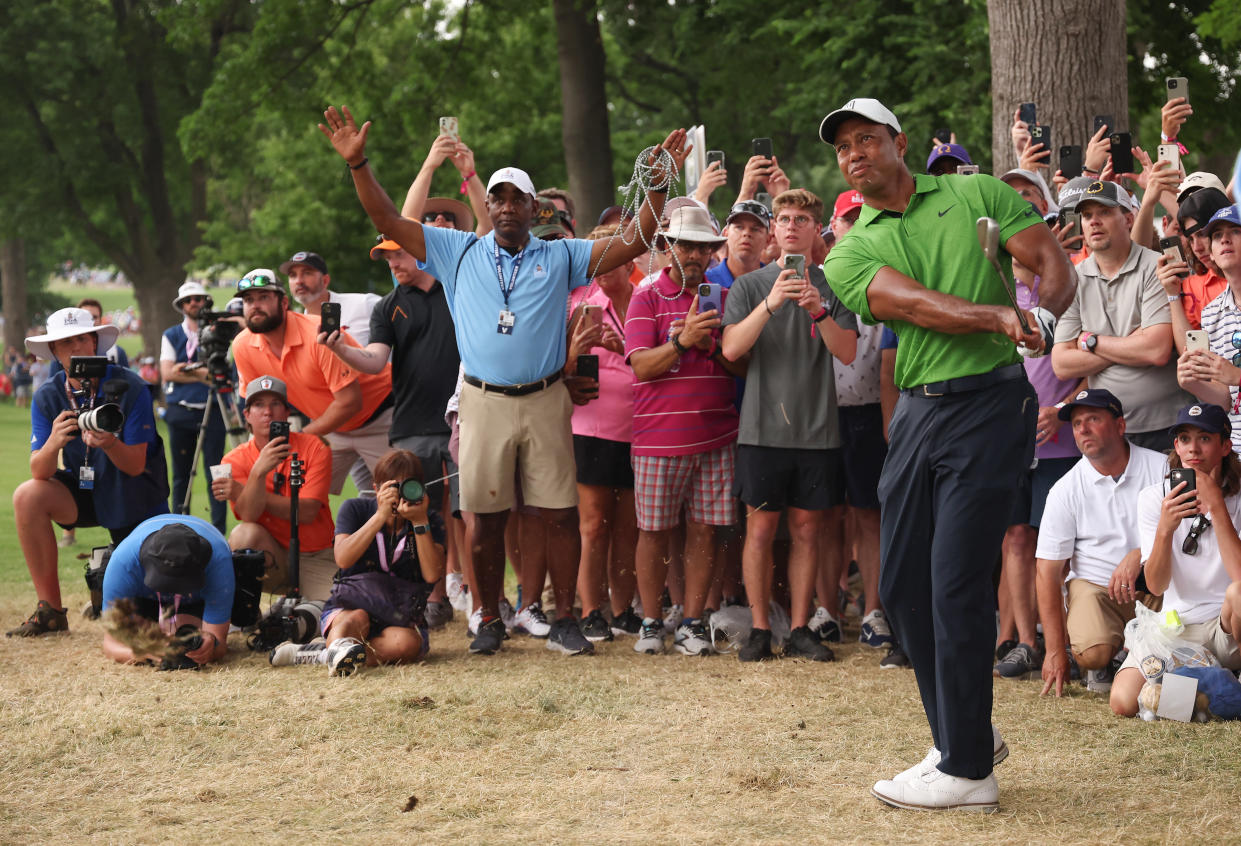