Donald Trump insisted Friday that the only way he will lose the presidential election in November is if Democrats cheat through mass mail-in ballot measures implemented in light of in-person voting concerns due to the coronavirus pandemic.

‘That’s the only way we’re going to lose, is if there’s mischief,’ Trump told a crowd of ultra-loyalists at a rally in Newport News, Virginia. ‘And it’ll have to be on a big scale. So be careful.’

‘And we do want a very friendly transition,’ he assured. ‘But we don’t want to be cheated and be stupid and say ‘Oh let’s transition.’ Well we’ll go and we’ll do a transition and we’ll know that there were thousands and thousands of ballots that made a difference through cheating. We’re not going to stand for it.’

The president was forced to affirm there would be a peaceful transition of power if Joe Biden wins in November after refusing to answer a direct question on the matter earlier this week during a White House press conference.

Trump has often railed against mail-in voting, as several states have taken measures to send out ballots to all registered voters in the midst of the global health crisis. He claims the alternative voting option will cause more instances of fraud and will disproportionately benefit Democrats.

He has also insinuated the election will not be legitimate if mass mail-in voting is implemented.

‘This is a disaster waiting to happen,’ Trump said of mail-in voting. ‘And the only hope we have really, other than going through a long, unbelievable litigation in the end after it’s over. Because we’re going to win. We’re not going to lose this, unless they cheat – that’s the way I look at it.’ 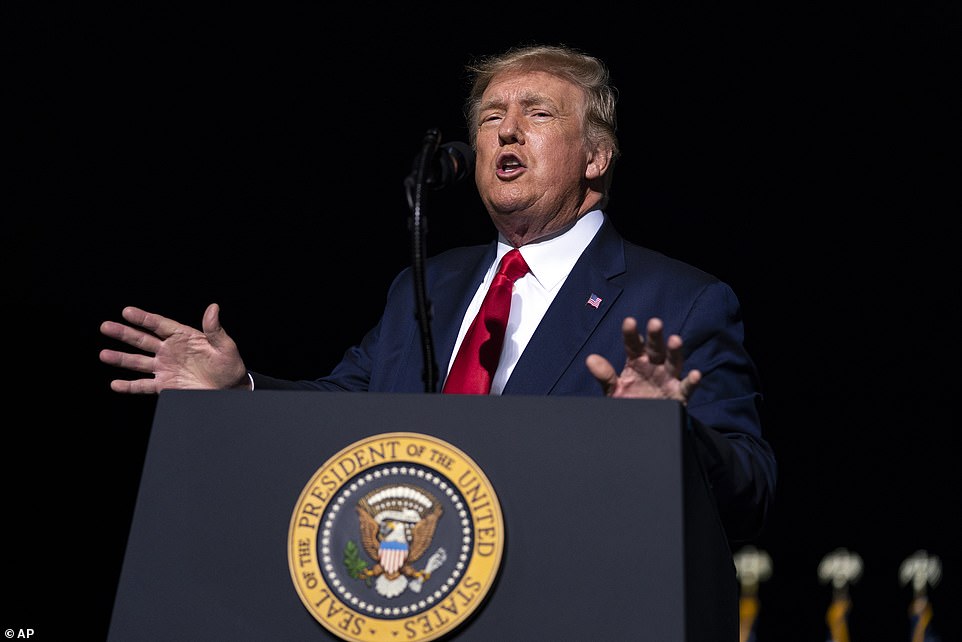 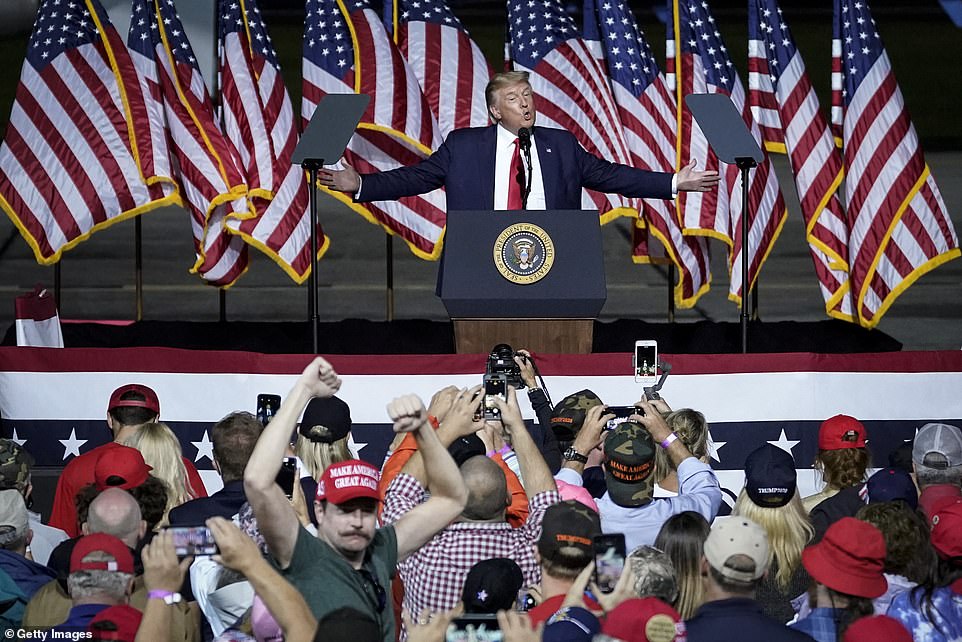 ‘That’s the only way we’re going to lose, is if there’s mischief. And it’ll have to be on a big scale. So be careful,’ Trump warned an ultra-loyalists crowd at a rally in Newport News, Virginia 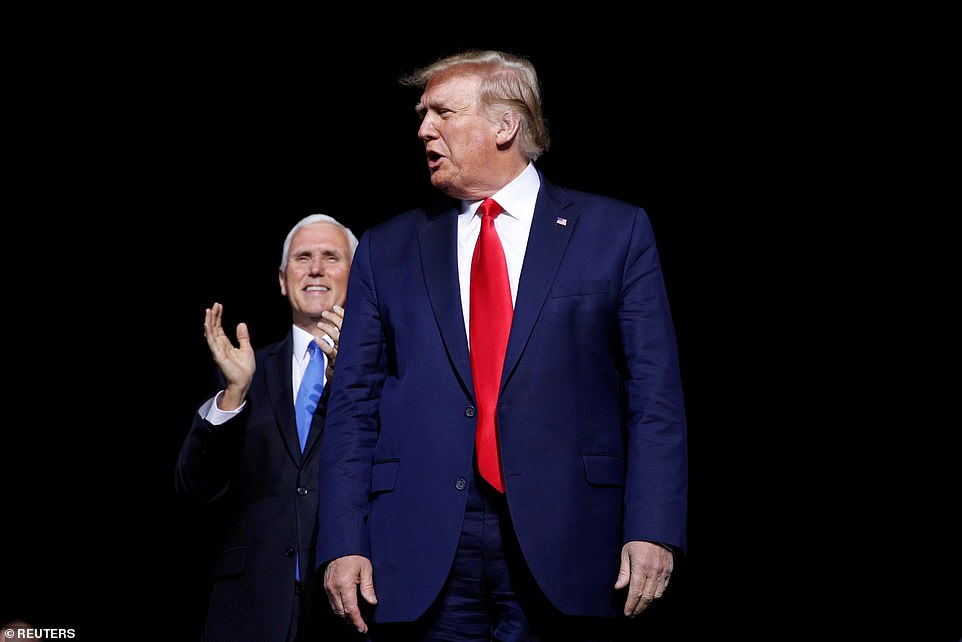 He warned his supporters against harvesting, where those delivering the ballots try to sway voters one way or the other, and urged them to report any suspicious activity or potential sabotage.

‘If you see anything, you just have to report it and everything. We’re all watching,’ he said.

President Trump was asked during a press briefing Wednesday evening if he would commit to a peaceful transfer of power after the November election – and declined to do so.

‘Well, we’ll have to see what happens,’ Trump said.

It was a similar comment to those he made in 2016 when asked similar questions.

‘Win lose or draw in this election will you commit here today for a peaceful transferal of power after the election?’ Trump was asked at the top of his press briefing.

‘Get rid of the ballots and you’ll have a very peaceful – there won’t be a transfer frankly, there’ll be a continuation,’ the president continued, in a likely reference to mail-in ballots.

He continued: ‘The ballots are out of control. You know if. And you know who knows it better than anybody else, the Democrats,’ he said.

This caused many Republican lawmakers to come to the defense of U.S. election integrity, ensuring there will will a ‘peaceful’ and ‘orderly’ transition no matter who the victor is.

Biden was at a loss for words when asked how he felt about the president’s comments.

‘What country are we in?’ the former vice president queried to reporters.

‘I’m being facetious,’ he clarified. ‘I said, what country are we in? Look, he says the most irrational things. I don’t know what to say.’

The president made the comment as some of his fiercest critics have accused him of making moves toward authoritarianism. Biden said this summer trump will ‘try to steal’ but said he is convinced the military ‘will escort him from the White House with great dispatch.’ 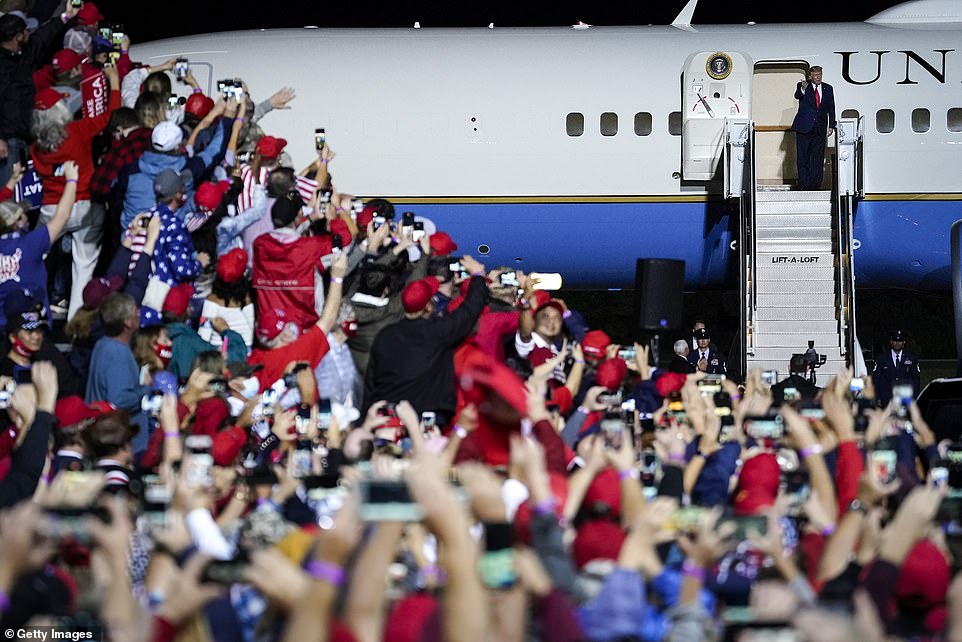 Thousands donning Trump insignia gathered for an outdoor rally on the tarmac of the New News/Williamsburg International Airport in Virginia Friday evening.

Rain cleared out before the president’s arrival as a brisk wind welcoming the first week of fall prevailed throughout the night as Trump spoke just 38 days before Election Day.

Many attendees wore face coverings with Trump’s campaign logo or slogan plastered across, while others did not comply with Centers for Disease Control recommendations, and several had masks pulled below their chins for the duration of the rally.

The overall theme of the night? Fill that seat!

Crowd members encouraged Trump in the form of blue signs with white lettering and verbal chants to nominate a conservative Supreme Court Justice to fill liberal Justice Ruth Bader Ginsburg’s seat, which was left vacant with her death last Friday.

Earlier in the day, reports emerged that the president will nominate Federal Judge Amy Coney Barrett to replace Ginsburg, who lied in repose at the Supreme Court and Capitol this week.

Ginsburg died at 87-years-old due to complications from pancreatic cancer.

Trump has promoted filling the seat before the election, further suggesting he will question the outcome in November and is expecting a potential Supreme Court battle over the ultimate victor.

By getting his nominee through – a seemingly simple task with a Republican Senate majority – Trump wants to further ensure a conservative majority on the highest U.S. court, as well.

Virginia is the furthest southern state on the East Coast that voted for Hillary Clinton in 2016 – with all the other southern states voting red.

Trump lost the state by a more than 5 per cent margin, with Clinton earning 49.8 per cent compared to his 44.4 per cent.

Polls taken in Virginia show Biden winning in November somewhere between five and 14 per cent.

The president admitted he did not pay much attention to Virginia in 2016, claiming his advisors said it was a lost cause to the left. But after a marginal loss, Trump believes he could win over the Old Dominion state this time around.