Staycation bookings have soared in the past 24 hours following the announcement that travellers returning from France will have to quarantine.

One company in charge of two of the biggest holiday cottage websites in Britain saw its traffic suddenly increase by 25 per cent yesterday, according to the Financial Times.

And only 60 homes of the 19,000 Awaze offer were still available in August – with more than half in Scotland and intended for groups larger than 20.

Henrik Kjellberg, the company’s chief executive, told the Financial Times: ‘We now have friends of friends of staff calling, saying do you have anything left because we were due to go to France.’

He added that many bookings were also placed for the October half term.On 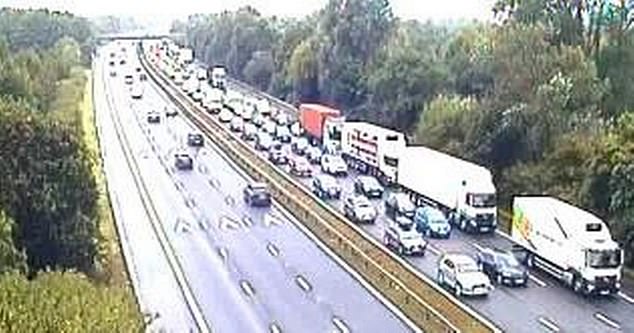 Major roads into Devon and Cornwall were brought to a standstill as eager sunseekers flock to the Britain’s coast for weekend getaways. Pictured: Delays on the M5

Hoseasons, one of Awaze’s websites, saw a 233 per cent increase in bookings for October compared to last year.

The prices across the company were also up 18 per cent for August against the previous year’s figures.

Private jet bookings also rose as Britons scrambled to get home to avoid having to quarantine for two weeks.

The surge in demand came after it was revealed on Thursday that travellers returning from countries including France, the Netherlands, Monaco and Malta would have to self-isolate.

Alain Leboursier, head of sales at broker LunaJets, claimed that bookings between France and the UK were ‘completely booming’.

‘Every time there is another quarantine or lockdown it is insane,’ he said.

PrivateFly revealed it received three times the number of inquiries for private jets out of the countries recently added to the UK’s quarantine list than the previous day.

And National Express also reported a ‘significant increase’ in searches for Devon and Cornwall after the new travel measures were announced.