Ukrainians are celebrating their first Christmases in the UK amid hopes for peace and being reunited with their loved ones back home in 2023.

Despite usually celebrating Christmas on January 7 – as determined by the Orthodox Church – Kateryna Chebizhak, 34, and her seven-year-old son Kolya, are planning on spending December 25 with friends who live near them in Enfield, North London.

‘We have friends here that live just next door and we will meet to celebrate’, the telephone interpreter said.

‘I have some presents for Kolya and we will have a nice walk, we might do some arts and crafts and play Uno.’ 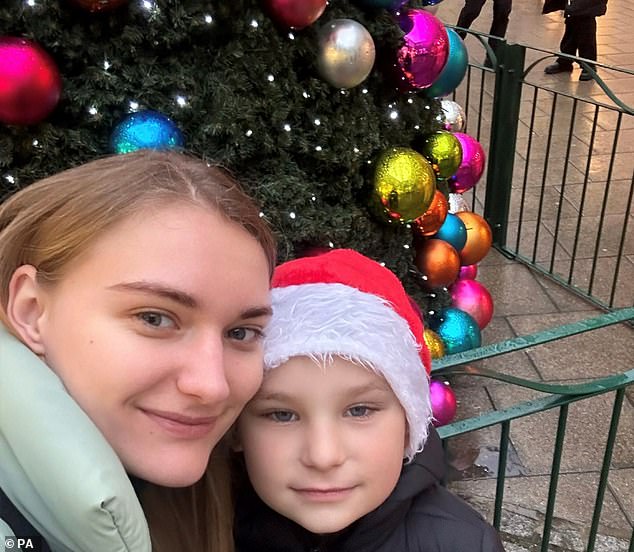 Kateryna Chebizhak (left), 34, and her seven-year-old son Kolya (right), are planning on spending December 25 with friends who live near them in Enfield, North London 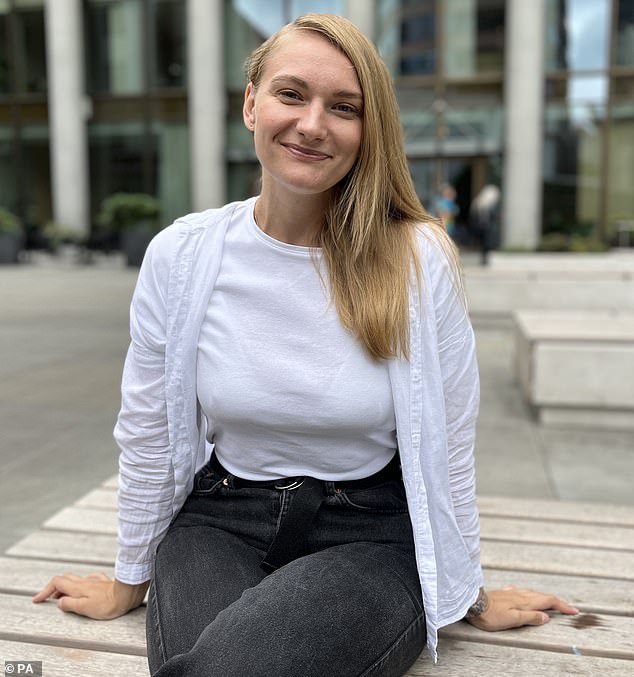 Ms Chebizhak and her son came to the UK in April after fleeing Kyiv. This Christmas is bittersweet for the pair as they cannot be with their family, who remain in Ukraine.

The pair came to the UK in April after fleeing Kyiv, following short stays in Poland and Germany.

Ms Chebizhak said when she told her son that in the UK children usually receive Christmas presents on December 25, he began making a list.

‘Usually in Ukraine, we just get presents under the Christmas Tree in the New Year, but [in the UK] it works differently’, she said.

‘Now’s he waiting for his two presents and he’s really excited.

‘As it is the school holidays, he has been writing letters to Santa Claus.’

This festive season is also shadowed with sadness for many Ukrainians in the UK.

Ms Chebizhak would usually spend Christmas with her family back in her home country.

‘Usually we have traditions where my mum (Tetiana) will always make 12 dishes which symbolise the 12 months of the year and we would make a wish on Christmas Eve and go to bed and it should come true’, she said.

Ms Chebizhak added that her parents, who remain in Ukraine, are doing fine but this year her mother has not put up a Christmas tree due to the ongoing war.

‘My sister Anna also used to live not too far from them and she also left to go to Greece with her two children, so they are alone and she doesn’t have any grandchildren nearby’, she added. 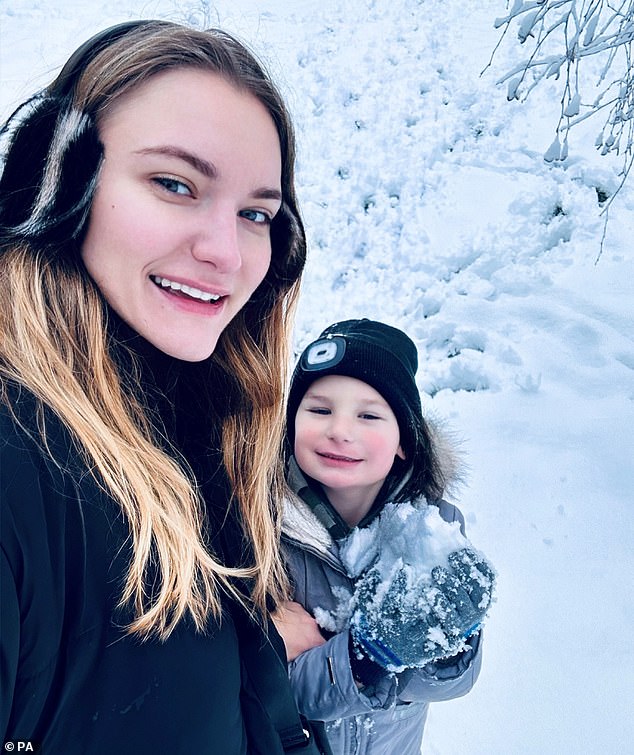 Ms said that Ukrainian children usually get their presents under the Christmas Tree in the New Year, but this year Kolya will open his gifts from Santa on Christmas Day

‘My mum and dad might sit down together and watch some movies or listen to the national anthem of Ukraine and we’ll have a call, but they are coping and doing great despite it not being a good situation.’

As the pair look forward to 2023, Ms Chebizhak said she ‘dreams of peace in our country’.

‘We really hope the war’s over and we can return to see Kolya’s dad as he misses him very much and is still in the Vinnytska region in Ukraine.

Ms Chebizhak also has plans to do an interpretation and translation course to fulfil her dream of becoming a fully qualified interpreter, thanks to public donations made through a crowdfunder set up by platform Beam, which is supporting Ukrainian refugees into jobs and homes.

‘We are so thankful for all the kindness and support, which means I moved into my own place in November and can do my interpretation course next year’, she said.

‘Kolya is also looking forward to continuing with school and his football classes.

Olha Komarnytska who lives in Birmingham with her children – Mia, 15, and Volodymyr, 13 – are also set to experience their first Christmas in the UK, alongside their host family.

They arrived in the UK from western Ukraine in May of this year. 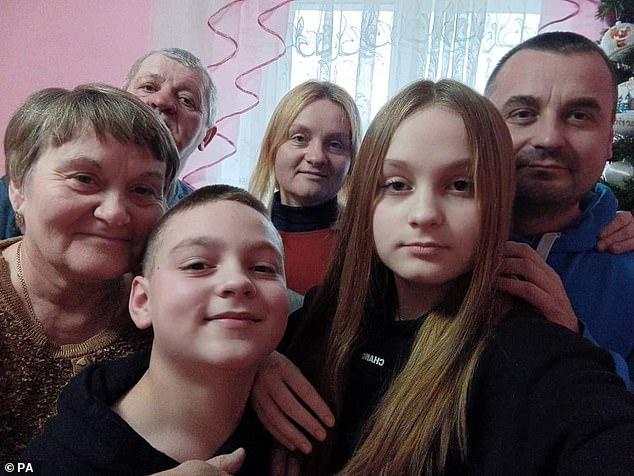 Olha Komarnytska and her family came to the UK in May. They will experience their first Christmas in the UK with their host family in Birmingham. Pictured: Vasyl (back left), Olha (back middle), Taras (back right), Anna (front left), Volodymyr (front middle) and Mia (front right)

The 42-year-old cleaner said that on December 25, the group will go to church together, followed by a Christmas dinner, which will include traditional British and Ukrainian food staples.

‘I plan to make cabbage with rice, meat carrot and onions and a Ukrainian salad with potato, carrot, meat, onions and cucumber,’ she added.

The family have already embraced the Christmas spirit by attending a party hosted by Centrala, an art space in Birmingham dedicated to promoting Central and Eastern European art and culture, on December 19 – Saint Nicholas Day.

‘It was amazing and all the children there were very happy – they received a lot of presents and they saw Santa and heard Ukrainian music’, she said.

Much of the family will be absent from the dinner however.

Ms Komarnytska’s husband Taras, her mother and father, Anna and Vasyl and brothers Dmytro and Vasyl all remain in Ukraine. 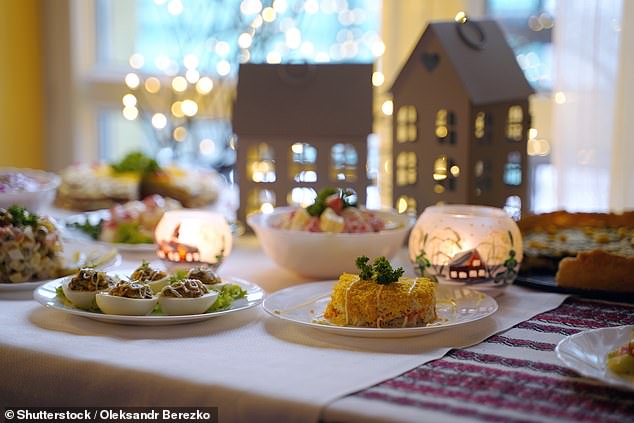 Ms Komarnytska said her family and their hosts will have a Christmas dinner on the big day, which will include traditional British and Ukrainian food staples. File image of traditional Ukrainian Christmas food 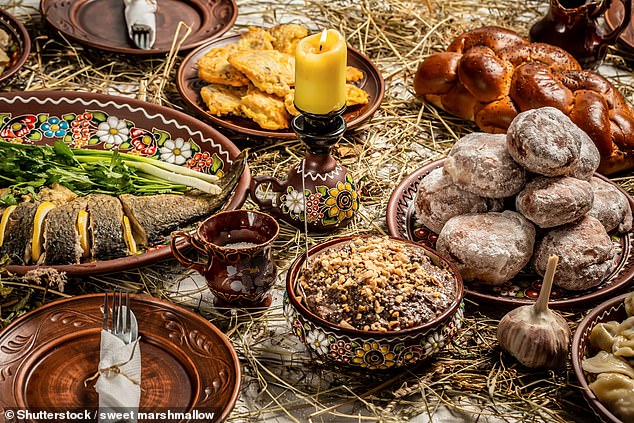 The most significant of Ukrainian Christmas dishes is Kutia (pictured front middle), which is made from boiled wheat and seasoned with honey, poppy seeds, nuts and dried fruits. File image

‘It’s not good, we are not happy – but the situation is very bad because of the war happening in Ukraine and there is a bad situation with electricity where many don’t have any.’

As for her hopes for 2023, Ms Komarnytska said she will be ‘happy if I am in Ukraine’.

‘I want to come back to my family and spend time with my family.

‘It’s very important for me because my children miss their dad, grandma and grandpapa and their friends.

‘I think next Christmas we will celebrate in Ukraine, but we will always remember how lovely and helpful those in the UK have been to Ukrainians.’