Kyiv: Hundreds of people have been evacuated to the Ukrainian city of Kharkiv from the nearby village of Ruska Lozava that had been under Russian occupation for more than a month.

Almost half the village has escaped on buses, in shrapnel-ridden cars or on foot after fierce battles saw Russian troops pushed back and Ukrainian forces take full control of the village, according to the Kharkiv regional governor. 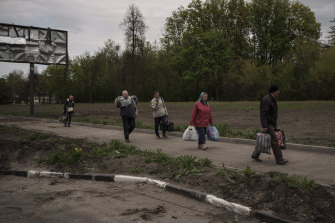 People fleeing the village of Ruska Lozova arrive at a screening point in Kharkiv.Credit:AP Photo/Felipe Dana

The evacuation occurred as Ukrainian President Volodymyr Zelensky accused Russia of trying to humiliate the United Nations by raining missiles on Kyiv during a visit to the city by the UN chief, a deadly attack that shattered weeks of relative calm in the capital.

Ukraine’s forces, meanwhile, fought to hold off Russian attempts to advance in the south and east, Zelensky reported. And UN-backed efforts to arrange safe passage for residents trapped in the ruins of Mariupol continued. Numerous previous attempts to evacuate civilians have fallen through.

Russia pounded targets all over Ukraine on Friday (AEST), hitting a residential high-rise and another building in Kyiv just as life seemed to be getting a little closer to normal. US-funded broadcaster Radio Free Europe/Radio Liberty said one of its journalists was killed.

Separately, a former US Marine was killed while fighting alongside Ukrainian forces, relatives said in what would be the war’s first known death of an American in combat. The US has not confirmed the report. At least two other foreigners fighting on the Ukrainian side, one from Britain and the other from Denmark, have also been killed.

In Ruska Lozava, troops appeared to raise the blue and yellow Ukrainian flag over the government building in the centre of the village in a video posted by the Azov battalion, although fighting continues on the outskirts.

Upon arrival to Kharkiv less than 20 kilometres away, those who fled have described to Associated Press reporters the dire conditions they faced while living in basements with little water and food and no electricity.

“We were hiding in the basement, it was horror. The basement was shaking from the explosions, we were screaming, we were crying and we were praying to god,” said Ludmila Bocharnikova.

In an apparent reference to the attack in Kyiv, Russia’s military said it had destroyed “production buildings” at the Artem defence factory. 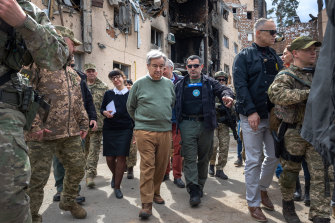 The bombardment came barely an hour after Zelensky held a news conference with UN Secretary-General António Guterres, who toured some of the destruction in and around Kyiv and condemned attacks on civilians.

“This says a lot about Russia’s true attitude toward global institutions, about attempts of the Russian leadership to humiliate the UN and everything the organisation represents,” Zelensky said in his nightly video address to the nation. “Therefore, it requires a correspondingly powerful response.”

The strikes were the boldest Russian attack on the capital since Moscow’s forces retreated weeks ago following their failure to take the city. Russia is now pushing into the Donbas, the country’s eastern industrial region, which the Kremlin says is its main objective. 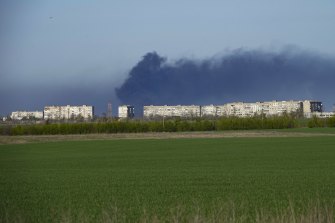 Smoke rises from the Metallurgical Combine Azovstal in Mariupol.Credit:AP Photo

Volodymyr Fesenko, a Ukrainian political analyst and head of the Kyiv-based Penta Centre think tank, said the Kyiv attack carried a message: “Russia is sending a clear signal about its intention to continue the war despite the international pressure.”

Getting a full picture of the unfolding battle in the east has been difficult because airstrikes and artillery barrages have made it extremely dangerous for reporters to move around. Both Ukraine and the Moscow-backed rebels fighting in the east also have introduced tight restrictions on reporting from the combat zone.

But so far, Russia’s troops and the separatist forces appear to have made only minor gains, and Britain’s Defence Ministry said those have been achieved at significant cost to the Kremlin’s forces.

One aim of Guterres’ visit was to secure the evacuation of people from the gutted southern port of Mariupol.

About 100,000 people are believed trapped in the city with little water, food, heat or electricity. An estimated 2000 Ukrainian defenders and 1000 civilians were holed up at a shattered steel plant in the last major stronghold of resistance in the city.

Ukrainian authorities are cracking down on anyone suspected of aiding Russian troops under laws enacted by Ukraine’s parliament and signed by Zelensky after the February 24 invasion.

Offenders face up to 15 years in prison for acts of collaborating with the invaders or showing public support for them.

Not all Ukrainians oppose the invasion, and pro-Moscow sentiment is more common among Russian-speaking residents of the Donbas, an industrial region in the east.