A respected university lecturer died after taking a prescription drug overdose and then telling his neighbour ‘I’ve done something silly’, an inquest heard.

Stephen Harding, 64, died in hospital in May fives days after suffering a cardiac arrest at his home in Cardiff.

The inquest hearing at Pontypridd Coroners’ Court on Tuesday heard Mr Harding, a former professor at Nihon University in Japan, had struggled with mental health problems and had taken a number of similar overdoses in the months leading up to his death.

A coroner heard he was in chronic pain, primarily in his hands, due to a history of alcohol abuse. 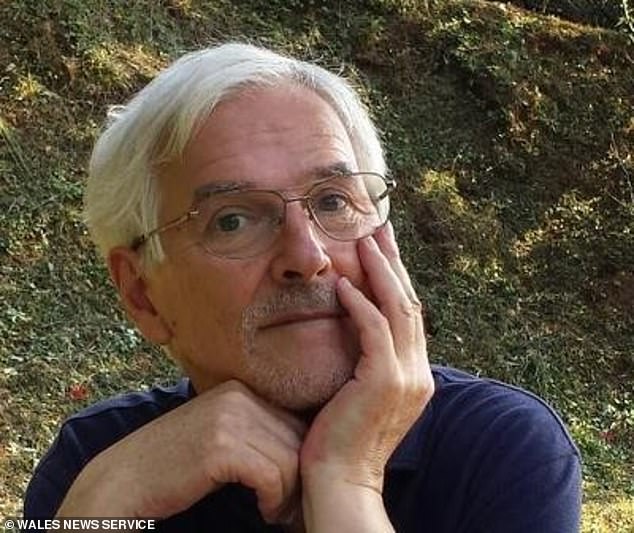 Stephen Harding, pictured, died after taking an overdose of prescription pills, an inquest heard, but told a neighbour he had ‘done something silly’

It meant he had to retire in 2015 and move back to the UK after spending 30 years in Japan.

Mr Harding took overdoses in April, the inquest heard, and was treated in hospital but discharged himself on May 11.

Two days later, on May 13, he threatened to take another overdose and was ‘showing signs of being suicidal’.

In a statement read out to the court registered mental health nurse Tina Taki said Harding was voicing suicidal plans to take an overdose due to the pain in his hands, legs, shoulders and neck, during a mental health assessment on May 13.

She said: ‘He appeared calm and relaxed during the assessment.’

Williams Adams, practice development nurse at the Cardiff and Vale University Health Board, said Mr Harding did not present as someone who was suicidal, following another assessment on May 14, after he told staff he ‘wanted help’.

He said: ‘There wasn’t the intent there to take another overdose. We didn’t feel like he met the criteria for admission and at the time he was quite calm and quite willing to engage.

‘He said at the time he didn’t feel that bad but the more anxious he became the more pain he was in.’

Paramedics were called to his flat at around 5.15pm on May 21 after receiving reports that a man was lying on the floor confused and unable to move.

A neighbour told the emergency services that Mr Harding had told him he had ‘done something silly’ before he had collapsed.

They found Mr Harding lying on his side but he quickly went into a respiratory cardiac arrest.

The inquest heard paramedics administered CPR to get Mr Harding’s heart going again and once he was more stable he was transferred to University Hospital Wales, Cardiff, and sent to the Intensive Care Unit (ICU).

It was believed that Mr Harding had taken an overdose of antidepressants, which he had previously taken overdoses of on two separate occasions.

While in hospital it was discovered that Mr Harding had suffered a hypoxic brain injury and his organs started to fail.

His treatment transitioned to end-of-life care and he died at 2.18am on May 26.

A post-mortem examination was carried out and his cause of death was given as multiple organ failure due to an out of hospital cardiac arrest due to self-poisoning with antidepressants.

In a statement read out to the inquest Dr Hywel Roberts of the University Hospital of Wales said it was ‘overwhelmingly likely’ that Mr Harding’s death was due to a suicide attempt by self-poisoning.

In reaching a narrative conclusion assistant coroner David Regan said: ‘There had been a history of self-ingestion of medication, at least on two occasions, and an ECG identified the use of [antidepressants]. It’s more likely than not Mr Harding took an overdose.

‘He had sought assistance in the aftermath of taking the overdose but it’s not clear how long he waited. Access to him could be obtained easily by the emergency services.

For confidential support in the UK, call the Samaritans on 116123 or visit a local Samaritans branch, see samaritans.org for details.