Home » World News » Unseen photographs of The Beatles before fame to sell for £10,000

Previously unseen photographs of The Beatles taken on a seaside tour before the group became world famous and a signed UNDERWEAR sleeve ‘stolen’ from their hotel bedroom are set to sell at auction for £10,000

Previously unseen photographs of The Beatles pictured weeks before they became world famous – plus a ‘stolen’ underwear sign – are set to fetch almost £10,000 at an upcoming auction.

The iconic collection of images were taken during the band’s six-day-tour at seaside town Weston-Super-Mare, Somerset, by superfan Sandra Woodruff back in 1963 before the Fab Four became a global success.

The megafan broke into the group’s hotel room at The Royal Pier Hotel with her friends and snapped pictures with them and later picturing them on the beach with fans.

The iconic collection of images were taken during a six-day-tour at seaside town Weston-Super-Mare, Somerset, by superfan Sandra Woodruff back in 1963 before the band became a global success. The memorabilia is set to go for more than £10,000 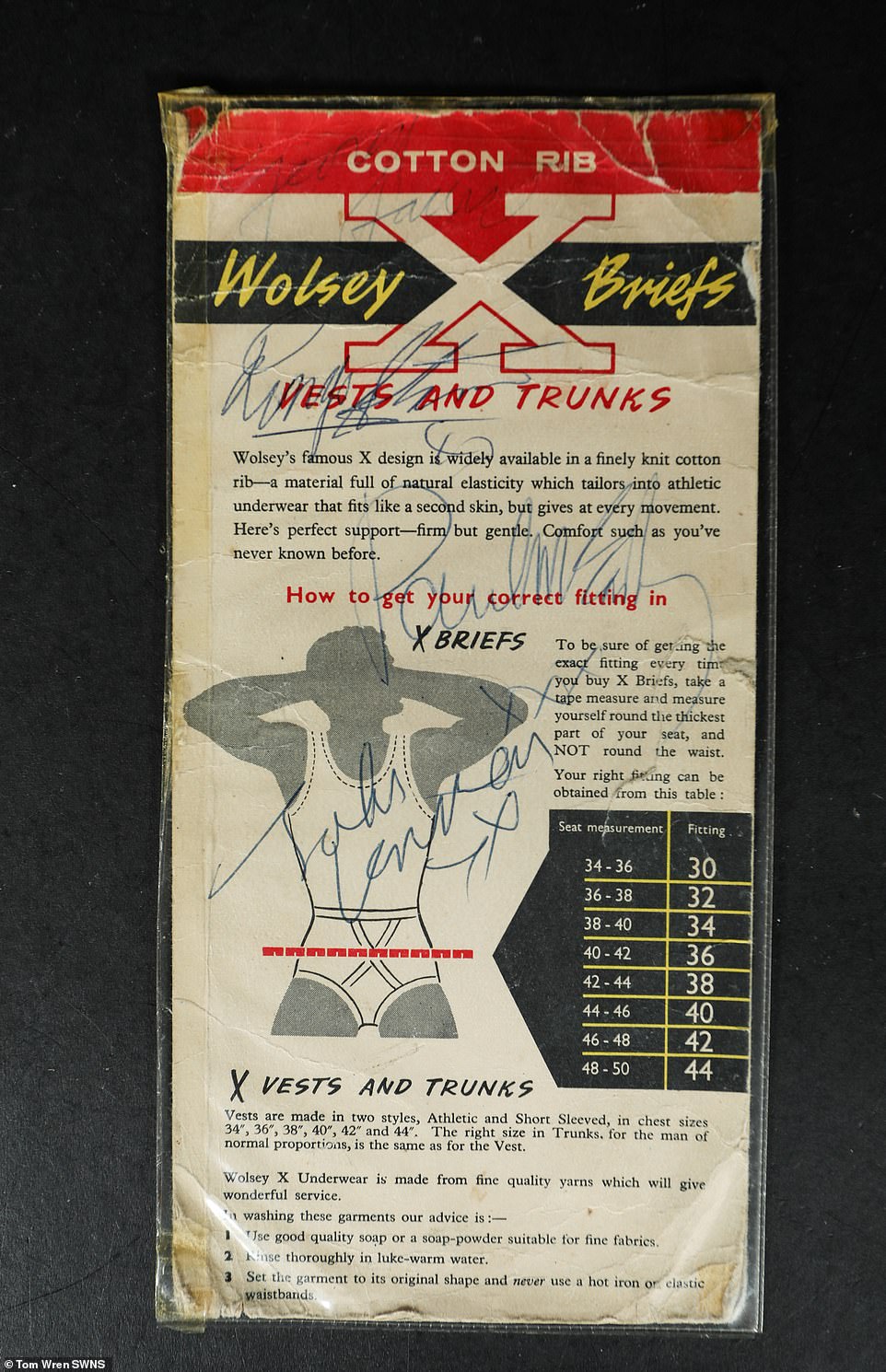 The collection features a signed cardboard sleeve advertising men’s underwear sign (pictured) that Ms Woodruff had ‘stolen’ from the rock band’s hotel bedroom during their six-day tour. The superfan spent two days outside the hotel before getting her souvenir card, and other photographs, signed by her idols

Also included in the auction lot is a memo Ms Woodruff had written about her invasion of the band’s bedroom nearly 60 years ago.

She reveals how she and her friends were directed to The Beatle’s room – number 49 – by rival band Gerry And The Pacemakers.

Ms Woodruff added: ‘The room was open, so we went in. No-one was there, the wardrobe was open with a Bible on one of the two beds, a letter for George on the dressing table and record cover with John’s name on – so it must have been John & George’s bedroom.

‘I took big card label from one of a pile of Wolsey Cotton Rib X Briefs. We nearly got the police called on us because we went up there!’

The Beatle’s admirer also had her camera with her and took several photographs of the band signing autographs and chatting to fans.

Other snaps show The Beatles posing on rocks alongside Birkbeck Pier for a famous publicity photograph taken at the time. 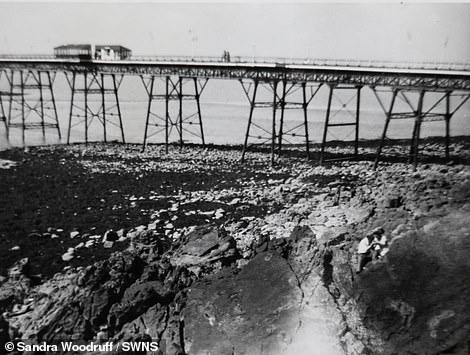 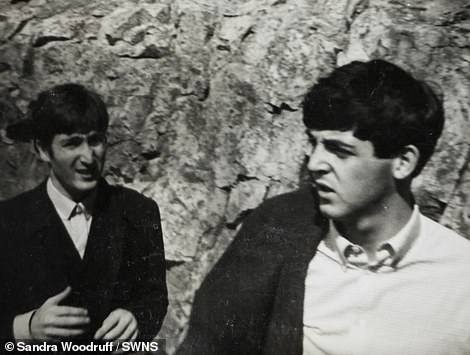 The superfan also took snaps to show The Beatles alongside Birkbeck Pier, showcasing what the band looked like before they reached their global success. The selection of images are set to go to auction on 27 May 2022 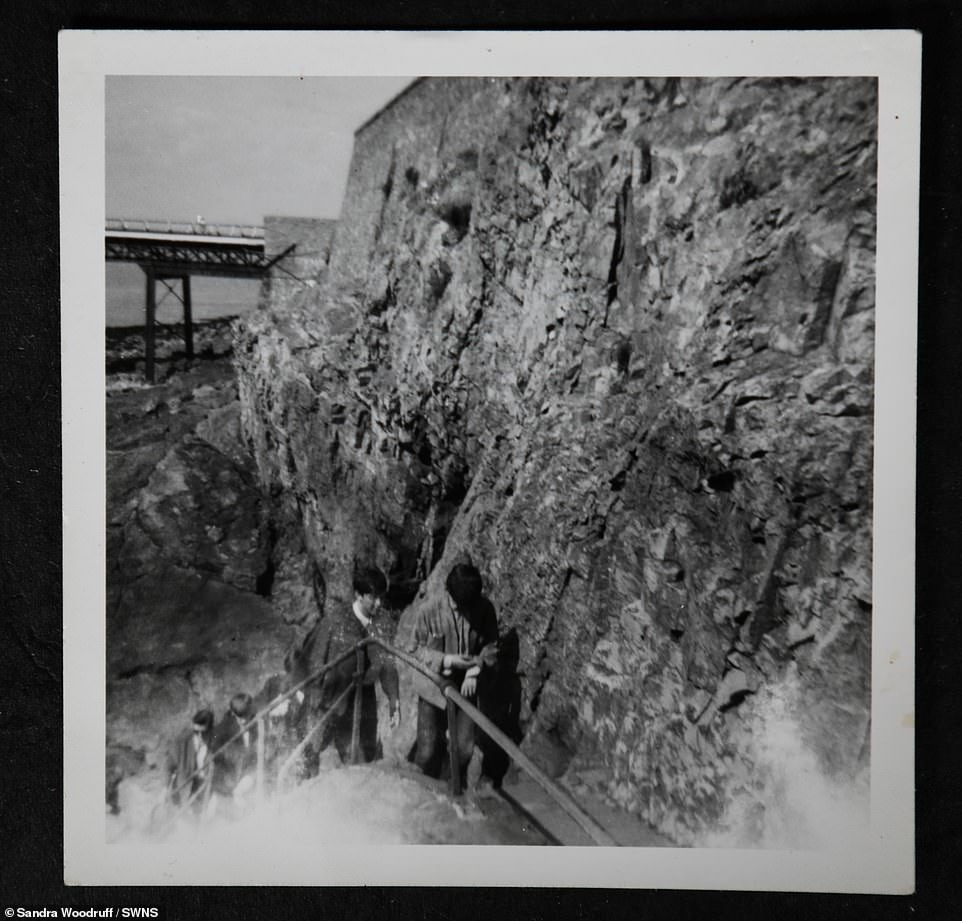 During her two days in Weston, Ms Woodruff was able to meet the band several times, and took several photographs of them on the beach, and meeting fans

Ms Woodruff and her friends then spent two days outside the hotel before getting her souvenir card, and other photographs, signed by her idols.

Auctioneer Andrew Stowe says the important images show what the Beatles were like before they achieved global fame. 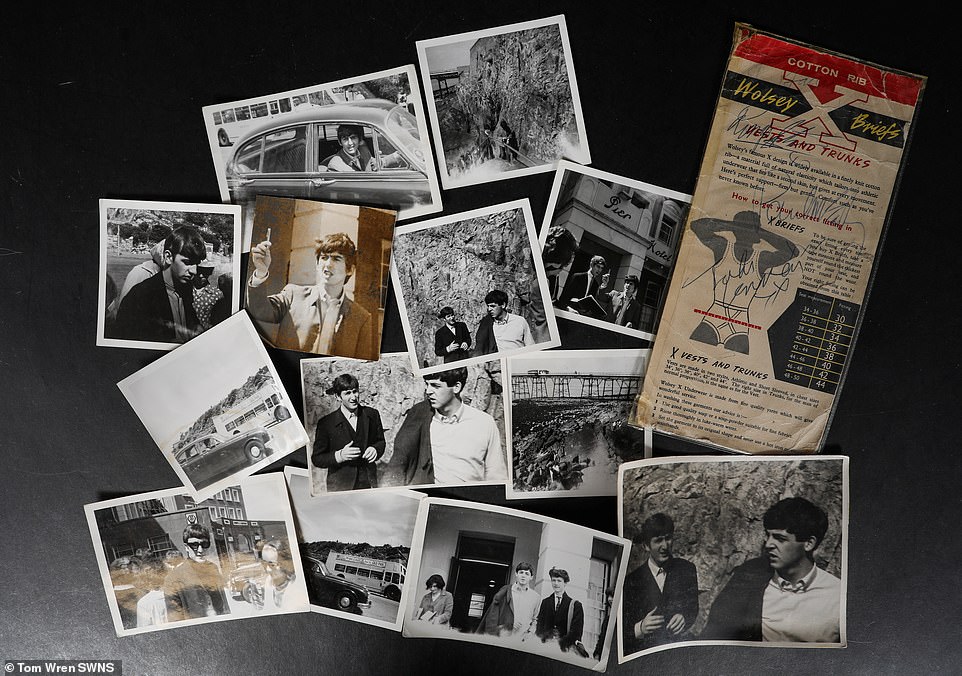 The collection will be sold at East Bristol Auctions and is expected to fetch more than £10,000. It includes the ‘stolen’ cardboard sleeve that Ms Woodruff and her friends managed to get signed by camping outside the superstars’ hotel

He said: ‘Here we see The Beatles just weeks before they were to become the most famous band on the planet, happily chatting to fans, signing autographs and generally having fun.

‘Their lives would never quite be the same. Seeing their young faces is really touching – nobody could have predicted how important those four young men would become!

‘It’s a unique collection, and the underwear label in particular is one of the best pieces of Beatles memorabilia I have ever come across.

‘Not only does it come with a fantastic story, but it’s also signed by all four members. It is the ultimate representation of Beatle-mania.’

The Sandra Woodruff collection goes under the hammer at East Bristol Auctions on 27 May 2022.

The full catalogue went live today (13 May 2022) and can be viewed on their website www.eastbristol.co.uk.