What they DON’T tell you before you escape to the country: Tempted to flee the city (and coronavirus) for a rural idyll? Don’t start house-hunting until you’ve read this hilarious A-Z from one writer who did just that

Last summer there was an unprecedented exodus from Britain’s cities as urbanites, fed up with lockdown and freed from the office, sold up and started a new life in the country.

Searches for properties in villages and small towns tripled on property websites, with larger, detached houses particularly popular. Sales in some areas are up almost 80 per cent on last year.

But it’s only now, as temperatures drop and sunshine gives way to storms, that the realities of rural life truly begin to emerge.

Here, Tom Rawstorne, who 15 years ago swapped a London terrace for a rambling period property in the Kent countryside, gives his insights into the not-so-good-life of mud, mice and marauding ghouls… 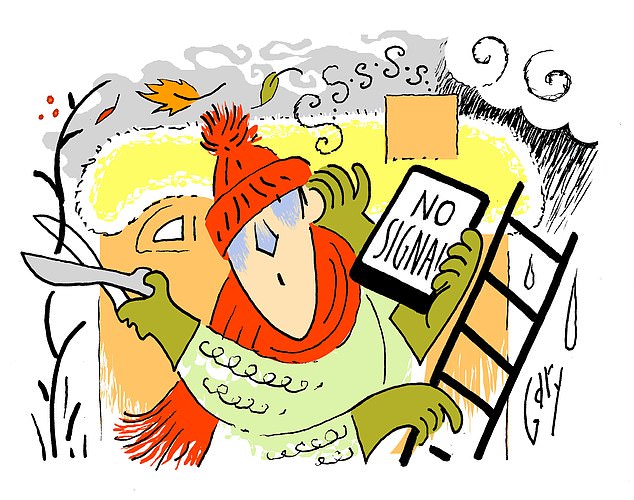 Here, Tom Rawstorne, who 15 years ago swapped a London terrace for a rambling period property in the Kent countryside

A is for Aga. And Aga Khan. The former is the reason you fell in love with the kitchen in your new house. The latter is how rich you have to be to own one — something that will have dawned on you the moment you opened your first gas bill. From here on in, you will try to convince yourself that your range does lots of exciting things a normal cooker can’t — for example, you can dry your pants on top of it. A bit like a radiator. Oh, and it makes good toast.

B is for ‘I’m bored’. After a Swallows-and-Amazons summer, the children now refuse to venture outdoors, complaining that it’s too cold and wet and ‘there’s nothing to do in the country’. Your attempts to amuse them by making conker animals end with them watching Netflix while you stab yourself in the hand with a skewer.

C is for Cummings. You moved out of the city to get more space. But you’re not alone. Sought-after rural locations in Britain are being targeted by Boris Johnson and his loony sidekick, who have launched an ‘algorithm’ to encourage a splurge of housebuilding. Nothing ruins a good bracing walk like spotting an orange planning notice pinned to a fence-post half a mile from your house, announcing a new 300-home development by Bovis Homes.

D is for DFL, or Down From London, a derogatory term used by locals everywhere to deride incomers and the city ways they bring to their new home. A recently moved friend and his family recall walking carefully through a field of cows, only to be accosted by a furious red-faced farmer shouting: ‘Look at you wandering about in your fancy London wellies.’

E is for Edward Scissorhands, the nickname my wife gave me after our first year in the country, on account of the fact that I seemed to spend every waking hour cutting back overgrown trees, hedges, shrubs or grass. Sit down for half an hour to enjoy the summer flowers and by the autumn you won’t be able to find your front door in all the greenery.

F is for Fudge, the chocolate labrador puppy you bought the minute you moved in. Great fun in July, less so with the arrival of the autumn rains. Now you find yourselves staring through condensation-streaked windows, mumbling ‘It’s like the Somme out there’ and eventually drawing lots to decide who takes the now obese dog for a walk in ankle-deep mud. 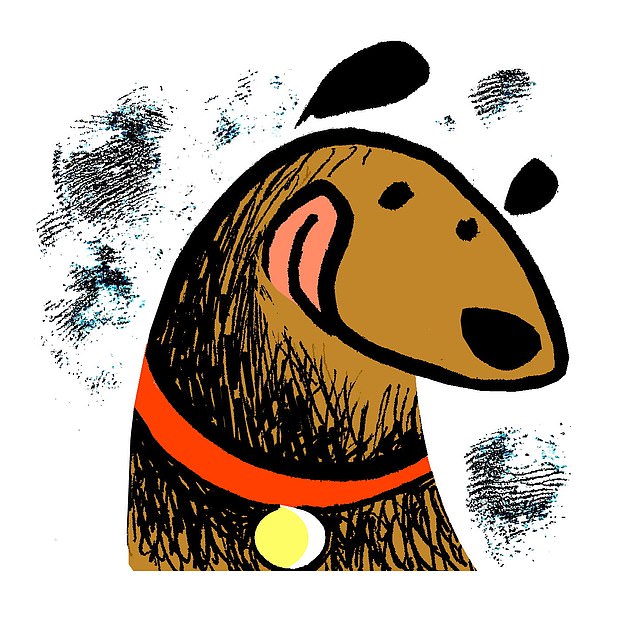 F is for Fudge, the chocolate labrador puppy you bought the minute you moved in. Great fun in July, less so with the arrival of the autumn rains

G is for gun. I once fired a warning shot from my bedroom window at a squirrel, wearing only underpants (me, not the squirrel). I don’t know who was more shocked, the squirrel or my wife, who was taking a relaxing bath at the time and has never forgiven me for the near-heart attack it gave her. But let your guard down at any moment and your house will instantly be infested with furry critters (see R is for Rodents).

H is for ‘Hey Siri’, the first words you now utter into your smartphone whenever you stumble out of your front door after about 6pm. As in, ‘Hey Siri, turn on the bloody torch.’

I is for insulation — of the personal sort. City houses and flats have fewer exterior walls and smaller roofs than detached or semi-detached houses, which means they are warmer and much less draughty. From September onwards, my wife’s bedtime get-up — bedsocks and multiple layers — would put Scott of the Antarctic to shame.

J is for joke. The broadband seemed fine when you viewed the property — but that’s only because the vendor had bribed all his neighbours to log off during your visit. On the day you moved in, you discovered that when all your children are on their devices, it takes an hour to send a one-line email to the office. The next four years will be spent googling ‘how much is satellite broadband’ and telling your children to ‘look it up in the encyclopaedia’.

K is for kit. Ladders, hedge trimmers, strimmers, rakes, lawnmowers. The shed where you imagined you’d spend the autumn fine-tuning home-made damson gin is so packed with gardening and home-maintenance gear that opening the door should come with a health warning.

L is for last train. Your only trip back to the city for a post-lockdown reunion with friends ended in disaster — and a £120 taxi fare —after you missed the last train home. Every subsequent visit will now be marred by you continually looking at your watch and mumbling: ‘Sorry, I really have to go…’

M is for ‘man the lifeboats’, the thought that crossed your mind after waking to discover that, following the latest series of downpours, the harmless little brook bubbling through the bottom of your garden has been transformed into a raging torrent.

N is for night-time visitors. As well as the dog, you now also own several hens. Not only will it take you five years to recoup the cost of the designer coop but, as the nights draw in, you realise that their presence in the garden acts like a tethered goat to the county’s predators. I’ve lost chickens to foxes and badgers — and even had a couple of chicks beheaded by a rat. Which kind of puts you off your morning scrambled egg.

O is for ‘Oh… thank you,’ which will be the slightly quizzical response you give to at least half the strange rural-themed gifts you receive this Christmas. From hedgehog-shaped boot-scrapers to specialist potato-picking gardening forks, your rural relocation is a gifting open goal that none of your relatives will pass up on.

P is for Poirot. When the water freezes or the lights fuse, you’ll need a detective with Hercule’s deductive powers to work out how your weirdly wired, paradoxically plumbed old house works. My advice: find the mains stopcock now, or risk spending the coldest day of the year waving a metal detector around the periphery of your property, desperately looking for it.

Q is for Audi Q8 or some other gargantuan 4×4 that you have to swerve around on the school run (it’s much too far to walk, of course). With the ever-darker nights, driving down unlit, narrow country lanes becomes even more of a gamble. Do you hold your line and lose your wing mirror, or swerve into the gaping pothole beside the verge, taking out yet another tyre?

R is for rodents. Your house is a magnet for everything small and furry. The minute the temperature dips, every mouse, rat and squirrel in the vicinity will move out of its summer lodgings and into your walls, under your floors and into your roof-spaces. Scratch, scratch, scratch, they’ll go, timing their activity to catch your attention just as you are dropping off to sleep. By April you’ll be looking like Jack Nicholson in The Shining, with a cupboard full of traps and poisons to match.

S is for sssssssss, the noise the logs you bought from the man whose card you found in the village shop make when you put them in the wood-burner. Where people in your old life swapped recommendations for restaurants, now the hot ticket is someone who sells wood that isn’t so wet you could wring it out.

T is for Tier Three. Even if you are subjected to the top tier of official coronavirus restrictions this winter, chances are you won’t notice it. Because, as will already have become apparent, there are no neighbourhood casinos to close, while even in the best of times it’s a struggle to find a country pub that will take a food order after 8.30pm.

U is for Uber. Or, to be precise, no Uber. Because by now you will have discovered that there’s only one local taxi firm — and that to book a pick-up on a Friday or Saturday night involves giving them a full month’s notice.

Woe betide you if your plans ever change at the last minute. One friend who failed to show up for his lift found himself blackballed by a local firm, and was left with no option but to send an effusive email of apology before they would deign to accept a booking from him again.

V is for V-shaped recovery. Or not. Having outbid two rivals to buy your new property, you read a growing number of news stories warning of a forthcoming house-price crash and are filled with horror.

W is for wellies, of which there are now so many in your house that you have finally understood why they are the only type of footwear to which rich people dedicate an entire room — the boot-room.

X is for excuses: everything, from the postcode not being recognised to your house sign being ‘obscured’ by a bush, that van drivers will use to explain why your latest delivery has been taken not to your home but back to the depot or sorting office.

Y is for yikes. With Halloween approaching, it may not just be your head hitting the exposed beams that goes bump in the night. Soon after we moved in, my wife answered the door to an elderly Dutchman enquiring after the previous owner. As he turned to leave, he asked: ‘Have you seen it?’ ‘It?’ my wife replied. ‘The ghost. The Roman centurion who walks the landing.’ Cue a winter hiding under the bedclothes at every creak.

Z is for zero, which is the number of regrets you will ultimately have for swapping the city for the country, just so long as you can see the problems for what they really are — minor inconveniences to either overcome or ignore. Get an outdoor tap to hose off your muddy dog, build yourself a Scandi-style log pile and — once you’ve blocked up the mouse holes — sit back and enjoy a glass of damson gin in front of a roaring fire. 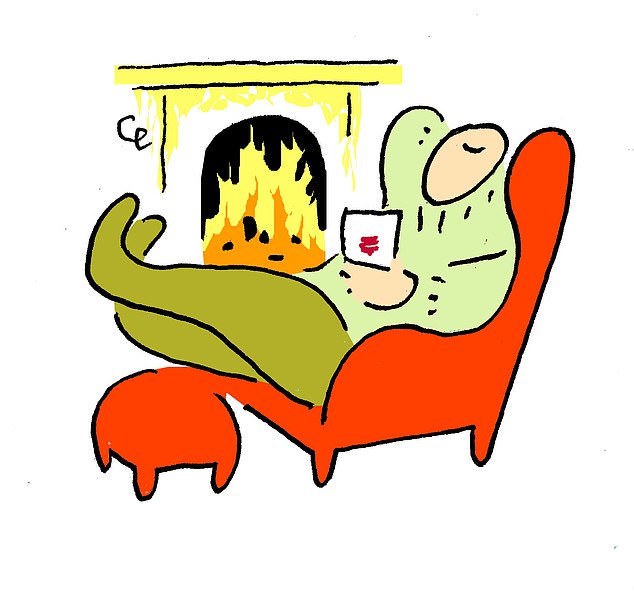 Z is for zero, which is the number of regrets you will ultimately have for swapping the city for the country, just so long as you can see the problems for what they really are — minor inconveniences to either overcome or ignore