South Dakota worker fired by online marketing firm CEO who posted ‘crying selfie’ on LinkedIn is SWAMPED with job offers: Ex-boss says ‘every single nasty comment was worth it’ 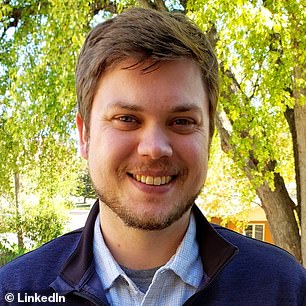 Noah Smith was one of the two employees let go by Wallake. He has now been inundated with job offers

A South Dakota marketing expert who was fired by the ‘Crying CEO’ has been inundated with job offers, his former boss has said.

Noah Smith was let go by HyperSocial, and last week the CEO, Braden Wallake, posted a lengthy explanation on LinkedIn of how devastated he was.

It later emerged HyperSocial had only eliminated two people from the company, and Wallake himself only dismissed one: Smith was given the bad news by Wallake’s girlfriend, Emily Chucta, the chief operations officer.

Wallake was mocked mercilessly online for the gushing post, in which he declared his love for his employees and said he had never felt so low. The post went viral, with 10,000 comments and over 52,000 reactions. Braden Wallake posted a tearful photo to LinkedIn last Tuesday, telling of his devastation at having to get rid of employees 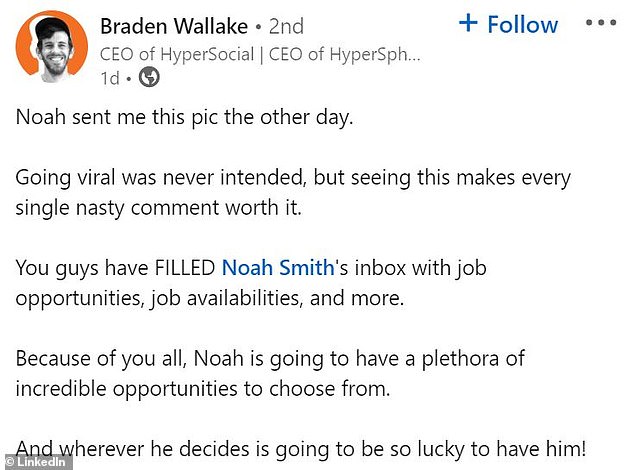 On Monday, Wallake said that the ridicule and infamy had been worth it, because Smith had been approached by multiple people offering potential new jobs.

‘Noah sent me this pic the other day,’ Wallake wrote on LinkedIn, attaching a screenshot of Smith’s LinkedIn inbox, full of people messaging about work.

‘Going viral was never intended, but seeing this makes every single nasty comment worth it.

‘Because of you all, Noah is going to have a plethora of incredible opportunities to choose from.

‘And wherever he decides is going to be so lucky to have him!’

Wallake said that he didn’t regret posting the photo of him crying and the heartfelt message – but he did regret how some people had cynically reacted.

He told PR Week he had also received many messages of support.

Asked why he didn’t delete the post, he replied: ‘The reason is because I am getting countless messages from other business owners saying, ‘love this, been there, worst feeling, right there with you.

‘There is a lot of good that has come from this post, but I am trying to not sit there reading the negative [comments].’

Wallake, who founded Hyper Social in 2016, first hit the headline last Tuesday with his initial post.

‘I know it isn’t professional to tell my employees that I love them,’ he said.

‘But from the bottom of my heart, I hope they know how much I do.’

He added: ‘I can’t think of a lower moment than this.’ 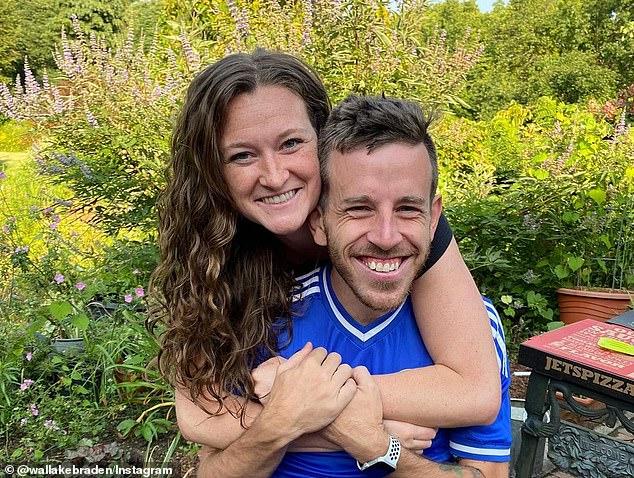 Wallake is pictured with his girlfriend Emily Chucta, the chief operations officer, with whom he was living and working in a branded camper van traveling the US before returning to Ohio 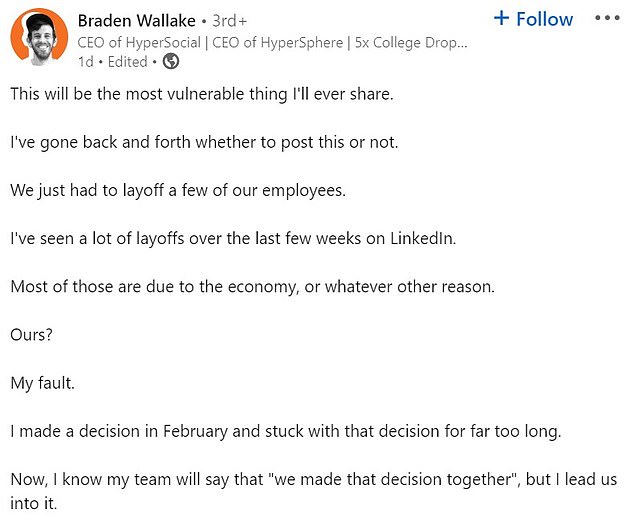 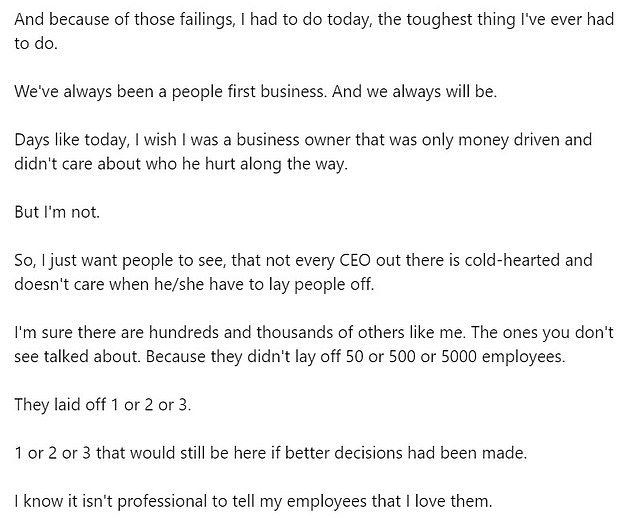 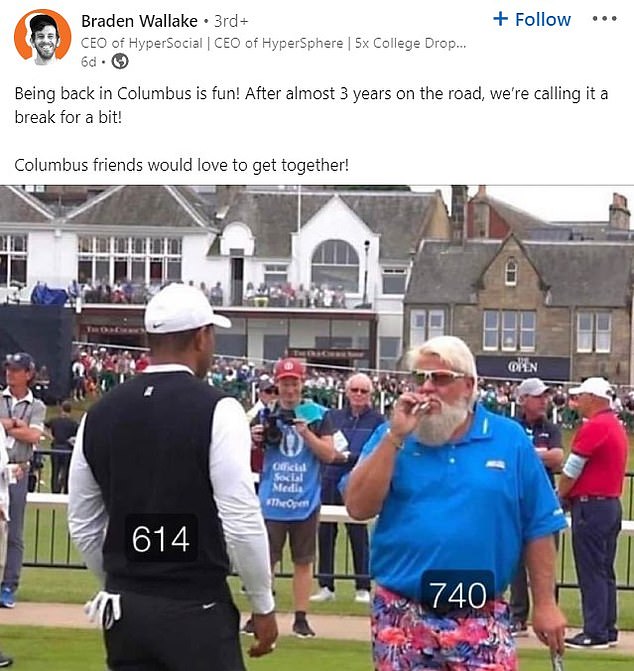 Wallake and his girlfriend were living out of van, but he announced that they just returned to Columbus, Ohio and are taking a break

Wallake and Chucta have spent the last three years traveling in a branded camper van and working remotely.

He announced on LinkedIn at the end of July that they had returned home to Columbus, Ohio.

Wallake had been to visit Smith in Sioux Falls last month.

‘The best part about living out of a van as a business owner,’ he wrote.

‘When your employees are all completely remote, you get to visit them!

‘We are heading to Chicago and decided Friday that we were going to stop into Noah Smith’s house and work for a couple of days in Sioux Falls!’

Wallake told Motherboard that both of the laid-off employees were ‘over-the-top nice’ about it and ‘assured’ him and Chucta that they were ‘going to be okay.’

He said he decided to make the LinkedIn post several hours later.

‘I was just sitting here at my desk, just kind of crying, I guess, and decided to make the post because I have seen a lot on LinkedIn recently of how awful business owners and CEOs are for laying off their employees and that they’re laying off employees while they’re getting their third house in the Bahamas or wherever,’ Wallake said.

Responding to comments on the post, Wallake said that he had stopped taking a salary, in order to avoid laying off staff.

He was previously taking $250 a week.

He told Motherboard that he had previously taken no pay after he rebranded the company in 2019, and only started taking a paycheck last year.

Yet as recently as two months ago, he was still taking on more staff.

‘I’m hiring,’ he posted on LinkedIn. 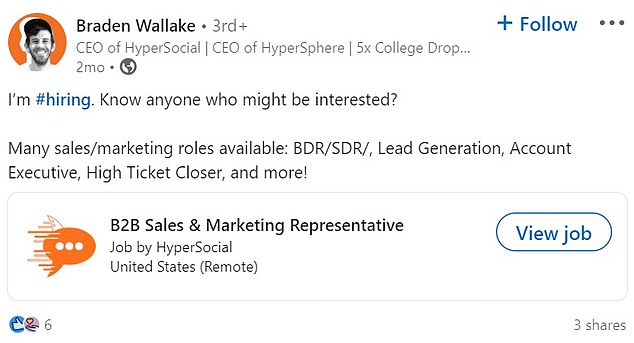 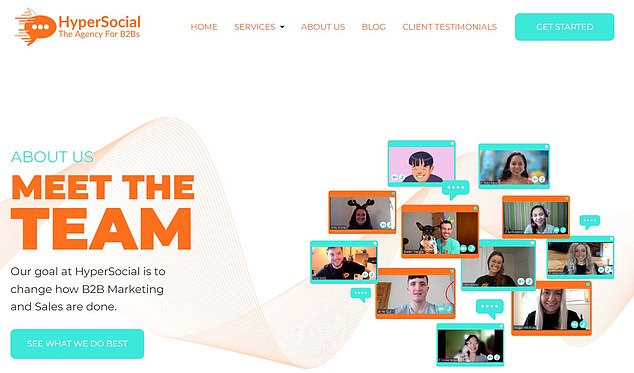 Wallake and Chucta were traveling the United States, living and working remotely from the vehicle 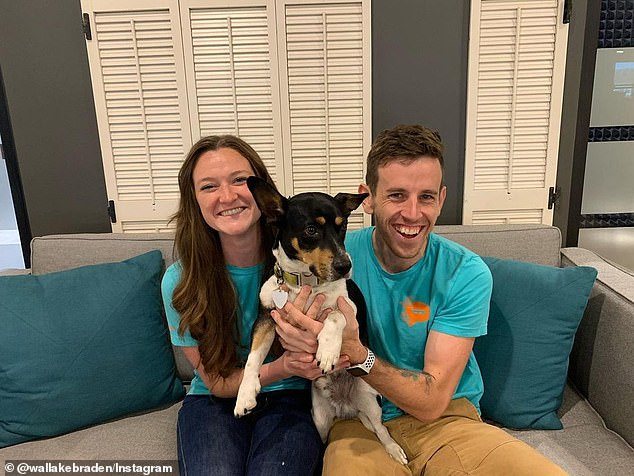 Wallake and Chucta are pictured with their dog, Roscoe 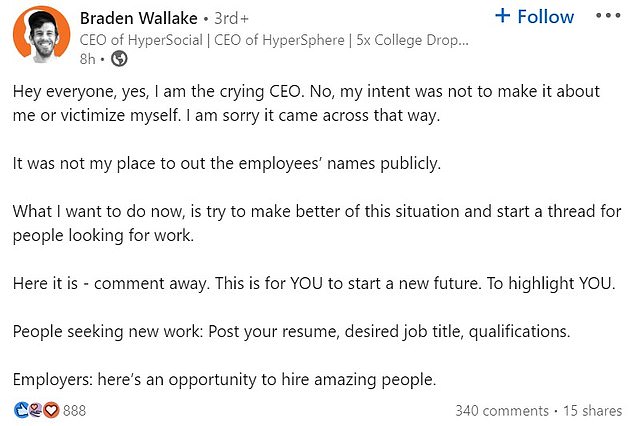 He said he never intended to downplay the emotions felt by those let go, but wanted to share his feelings.

‘This was a low time in my life,’ he told Motherboard.

‘[I] was not attempting to compare my low time to the laid off employees low time, because theirs is much worse.

‘But just to simply share the journey that I am going through personally as a business owner in the current world.’

Others accused Wallake of being too weak to run a company, or seeking sly self-promotion.

His company specializes in promotion on LinkedIn.

One of their areas of expertise is ‘LinkedIn outreach services’.

‘Need more sales activity for your B2B business? With our process, we take cold outreach and turn them into warm conversations with powerful, customized messaging,’ their website states.

His posts include: ‘5 Tips for LinkedIn to Optimize Your Presence,’ ‘Best Practices for Responding on LinkedIn,’ ‘8 LinkedIn Secrets Most Business Owners Don’t Know,’ ‘Is LinkedIn a Waste of Time?’ and ‘6 LinkedIn Business Page Mistakes Every Entrepreneur Should Avoid.’

‘Can’t believe my eyes. Do you really think you’re having a worse time that those you let go? Come on dude,’ said one.

Another commented incredulously: ‘You fired people and took a picture of yourself crying and hit post?’ 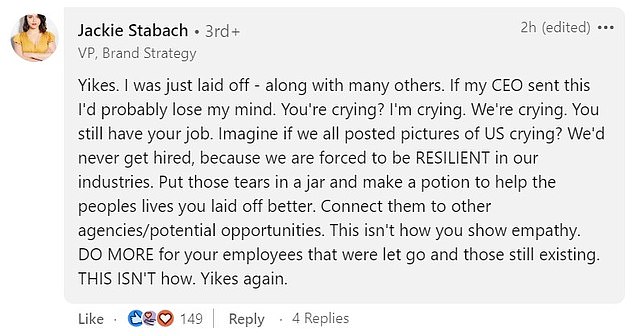 ‘Did this guy actually just post a selfie of… crying? I mean seriously, does he not have a clue how anyone with an IQ above 100 is going to see this as the most ridiculous trash posted on LinkedIn for the day (maybe week? month?? all year???).

‘This fake self-pity self-attention self-focus self-less self-junk cluttering LinkedIn has got to stop. Is there a STUPID button we can click to hide this kind of vomit?’

And Jackie Stabach, a VP of brand strategy, accused him of self pity.

‘Yikes. I was just laid off – along with many others. If my CEO sent this I’d probably lose my mind. You’re crying? I’m crying. We’re crying.

‘You still have your job. Imagine if we all posted pictures of US crying? We’d never get hired, because we are forced to be RESILIENT in our industries.

‘Put those tears in a jar and make a potion to help the peoples lives you laid off better. Connect them to other agencies/potential opportunities.

‘This isn’t how you show empathy. DO MORE for your employees that were let go and those still existing. THIS ISN’T how. Yikes again.’

Others were more supportive, praising Wallake for being open with his emotions and showing his humanity.

Wallake answered questions posted online, and said he hoped it helped some – even if it saw him being mocked.

When one person noted he was being accused of self promotion, Wallake replied: ‘It’s how people help themselves feel better I think.

‘It’s much easier to assume I’m being disingenuous with this post rather than try and get to know me and learn the actual truth of whether this post was an attention grab or came from the heart.’

He added: ‘I’ve laughed at people on other social media platforms who have posted pictures of themselves crying. And then I did it.

‘I have no doubt this post can be a useful tool to either keep those employees or help them find better positions.’

He told one commentator: ‘I do not regret the post. I regret how it was received.’