The World Health Organisation (WHO) has declared that the coronavirus epidemic in China now constitutes a public health emergency of international concern.

Tedros Adhanom Ghebreyesus, WHO director-general, announced on Thursday local time the decision after a meeting of its Emergency Committee, an independent panel of experts, amid mounting evidence of the virus spreading to some 18 countries. 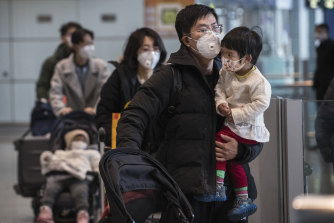 Passengers wear protective masks as they walk in the arrivals area at Beijing Capital Airport.Credit:Getty Images

"Let me be clear, this declaration is not a vote of no confidence in China," he said.

"Our greatest concern is the potential for the virus to spread to countries with weaker health systems," he added.

The WHO panel, chaired by Didier Houssin of France, is composed of 16 independent experts.

Twice last week the experts had decided not to declare an emergency while they sought more information from China and awaited evidence of confirmed person-to-person spread of the virus in other countries, so as to meet their criteria for a global emergency.

The declaration of a global emergency triggers recommendations to all countries aimed at preventing or reducing cross-border spread of disease, while avoiding unnecessary interference with trade and travel.

It covers temporary recommendations for national health authorities worldwide, which include stepping up their monitoring, preparedness and containment measures.

Although the WHO has no legal authority to sanction countries, it could ask governments to provide scientific justification for any travel or trade restrictions that they impose in the event of an international emergency.

There are nine confirmed cases in Australia – three in Victoria, four in NSW and two in Queensland.

Foreign Minister Marise Payne said on Wednesday morning that updated travel advice on the Smartraveller website now advised Australians to "reconsider your need to travel to China overall", and "do not travel to Hubei Province", the epicentre of the virus outbreak.