PANICKED Brits are scrambling to delay their getaways to Greece over fears the country could soon be added to the UK quarantine list.

The holiday hotspot has seen a relatively small recent spike in coronavirus cases, likely due at least in part to increased testing. 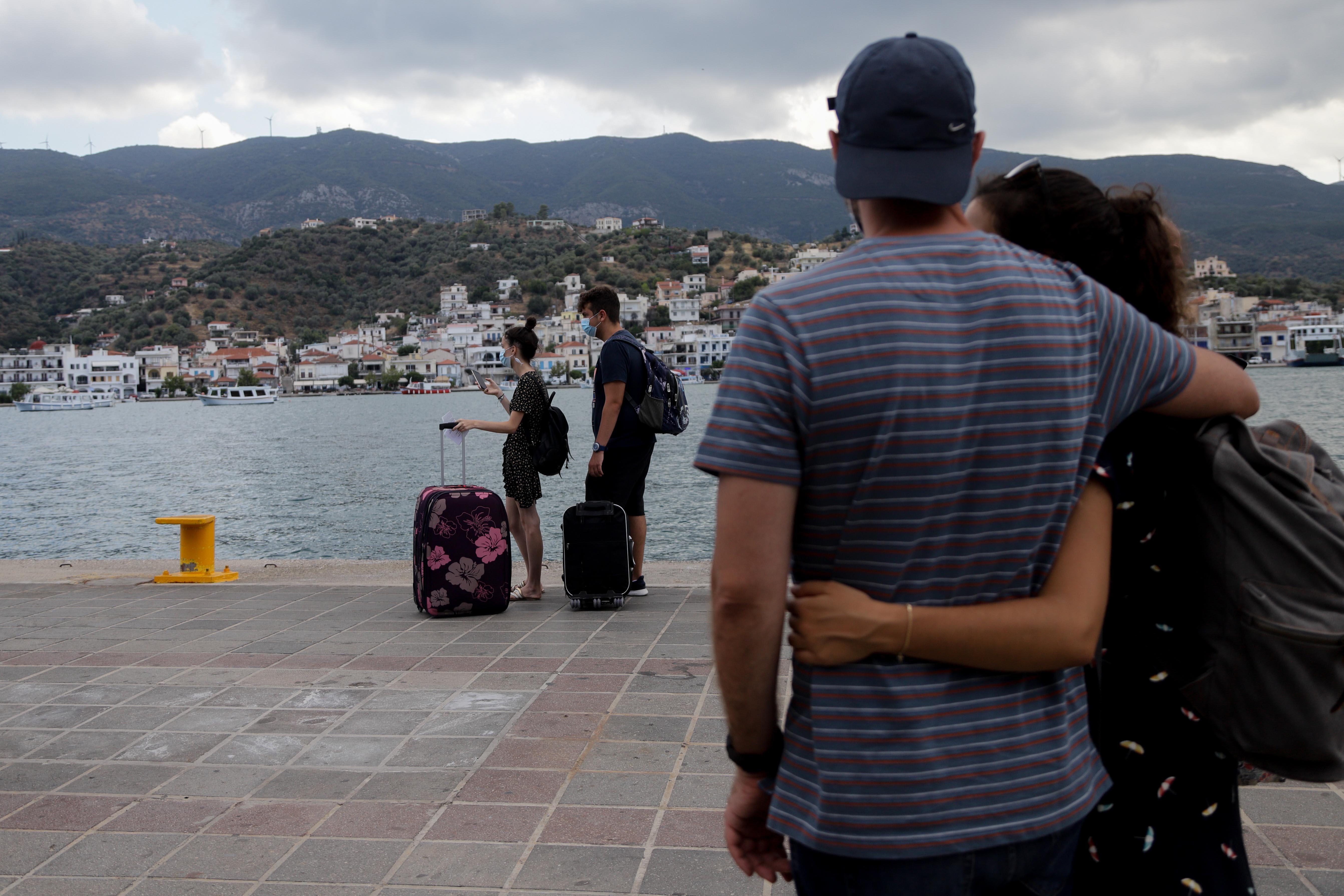 The number of cases in the tourist nation is now the highest since the beginning of the pandemic.

On Saturday Grant Shapps revealed anything above 20 cases per 100,000 for a period of seven days or more will likely lead to a country being added to the list.

Greece is now at 21.2 – after crossing the 20 threshold on Saturday.

The rise has been enough to worry authorities there, who brought in a raft of new measures this week including a curfew on bars and restaurants.

And it appears to have also spooked some Brits into calling off or delaying their trips, fearing they could be forced to quarantine on their return.

Other are waiting for Greece to be put on the list before scrapping their breaks in the sun – despite some insisting it is "safer than England."

One wrote: “Think I'm putting it back to next year now it's such a risk this year.

“I can't risk not getting paid from my work if it changed to quarantine.”

Another said: “Had the same problem but swapped the flights for same time next year and the cottage owners were happy for us to change as well.

“Should be more like normal Greece and we'll be able to enjoy it fully then, fingers crossed.”

A third posted: “Was ready to book a holiday to Greece flying out this weekend today, caught the news last minute luckily.

“I can see the UK putting it on the quarantine list now too.”

And another said: “We had Parga and Paxos booked for early September, now postponed to September 2021, but if the situation changes we will go for a week somewhere else in Greece earlier in the year.

“It is hard not to go but if we all stay safe better times should come sooner.”

Others said they were holding off cancelling but were anxiously hanging on for news in case the country was suddenly moved from the UK's “safe” list like Spain was last month.

One wrote: “I’m the same. I've got flights to Crete first week in September and a bit worried it will be headed towards UK ban / lockdown with current news.”

Another said: “I'm in the same dilemma as you. Booked to go to Skopelos next month, but don't know what to do.”

And one posted: “I’m same, go three weeks yesterday. If Boris does quarantine I ain’t booking another hol this year – that’ll be the second one gone.”

Others, however, were more upbeat, insisting they would push ahead with their well deserved breaks regardless.

And several Brits out in Greece now wrote that the country felt “safer than England” and was just “taking the virus seriously”. 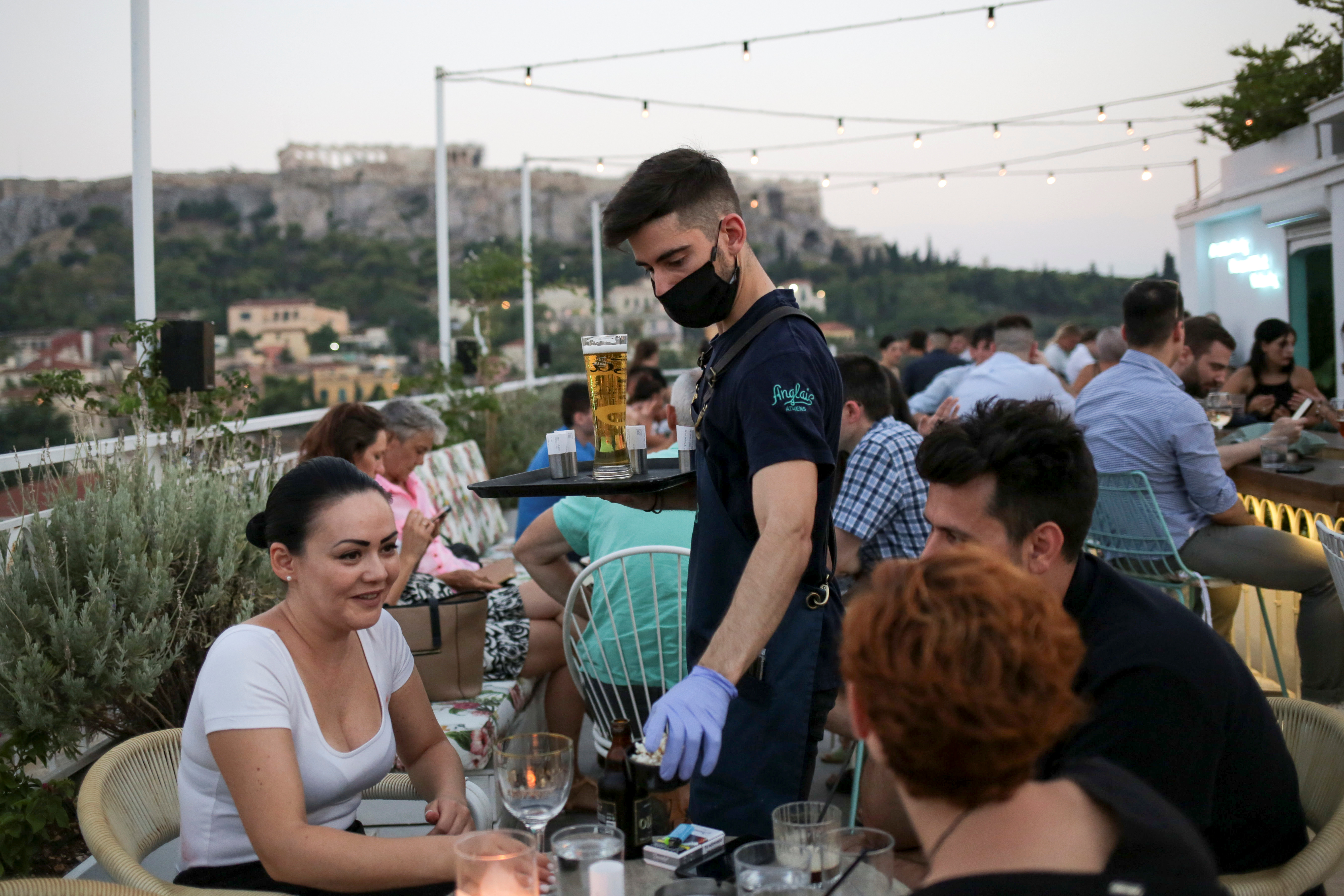 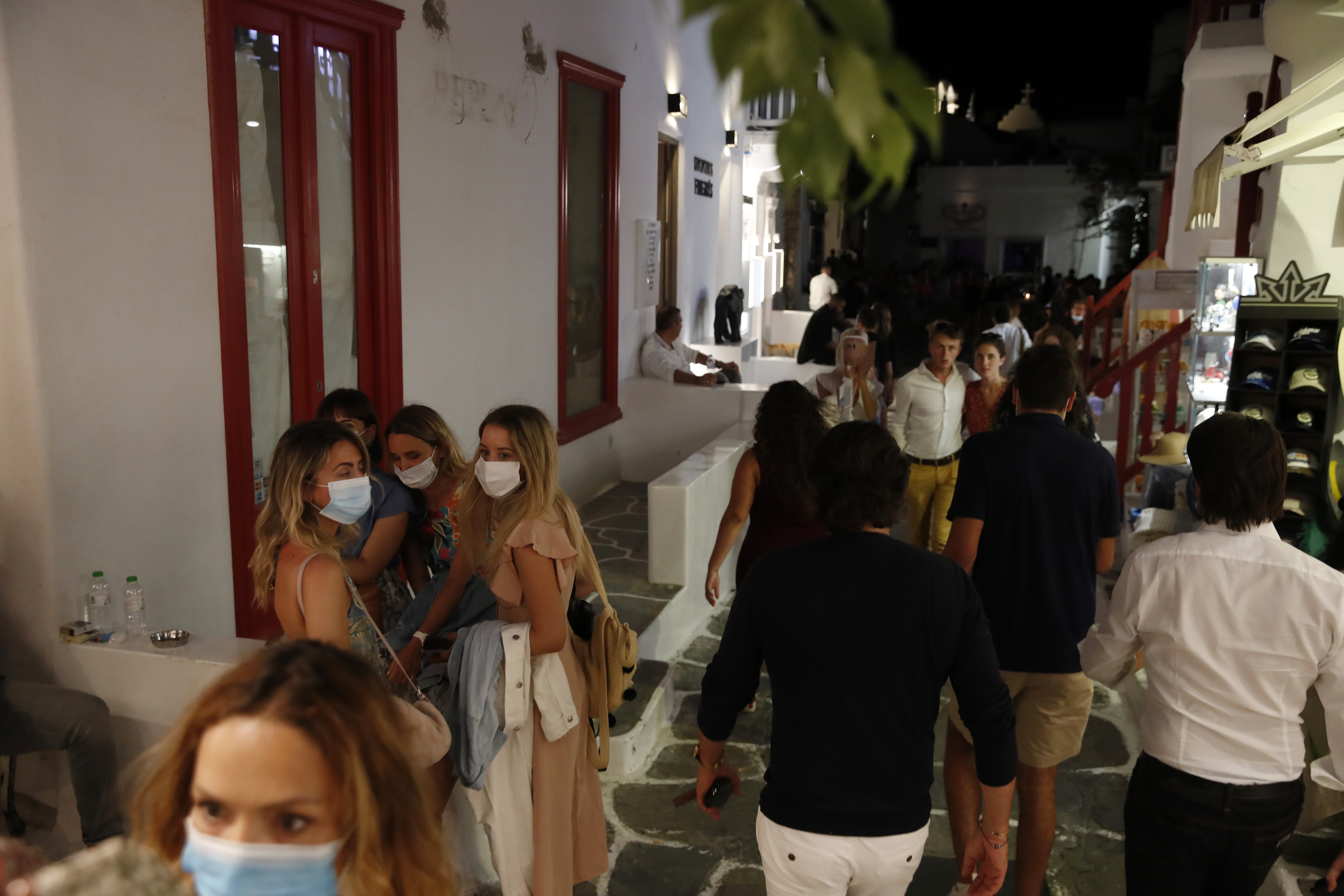 Greece has fared relatively well against Covid-19 compared to some of its Mediterranean neighbours, with a total of just 228 deaths.

But the country has seen a recent rise in new infections that has left authorities there concerned.

The rise is likely down to increased testing, but it was enough to spur the Greek government into action. 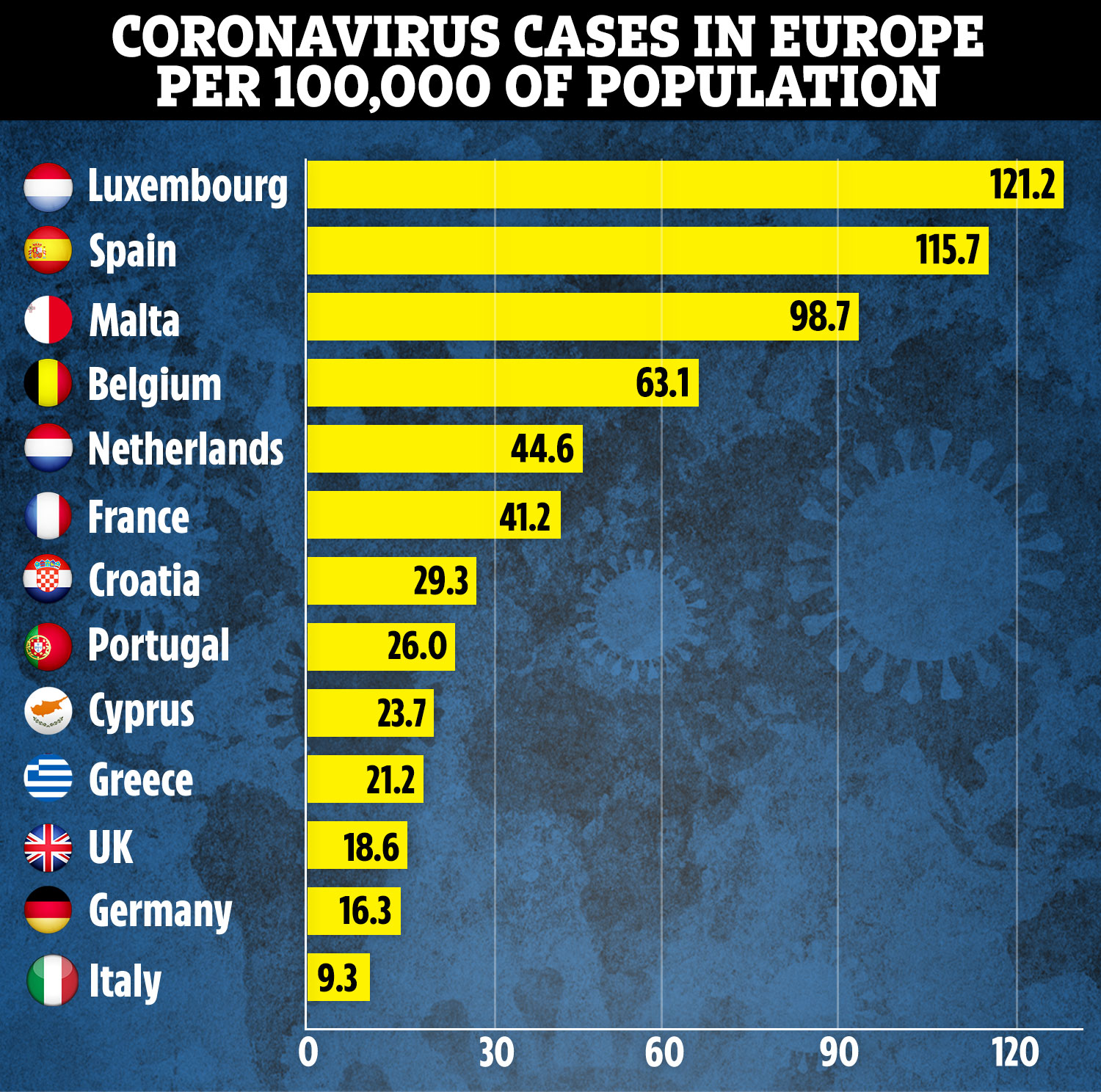 Athens has announced a string of new measures to curb the spread – ordering a night time curfew for bars, restaurants and cafes in some of the country's most popular holiday resorts.

Boozers and eateries in Mykonos, Santorini, Corfu, Rhodes, Zante and Crete must close at midnight, and cannot reopen until 7am under the new rules.

The cities of Thessaloniki, Larissa, Volos and Katerini are also affected, with the curfew lasting until at least August 23.

Every public event where people are standing, such as concerts and performances, is also being suspended throughout the country. 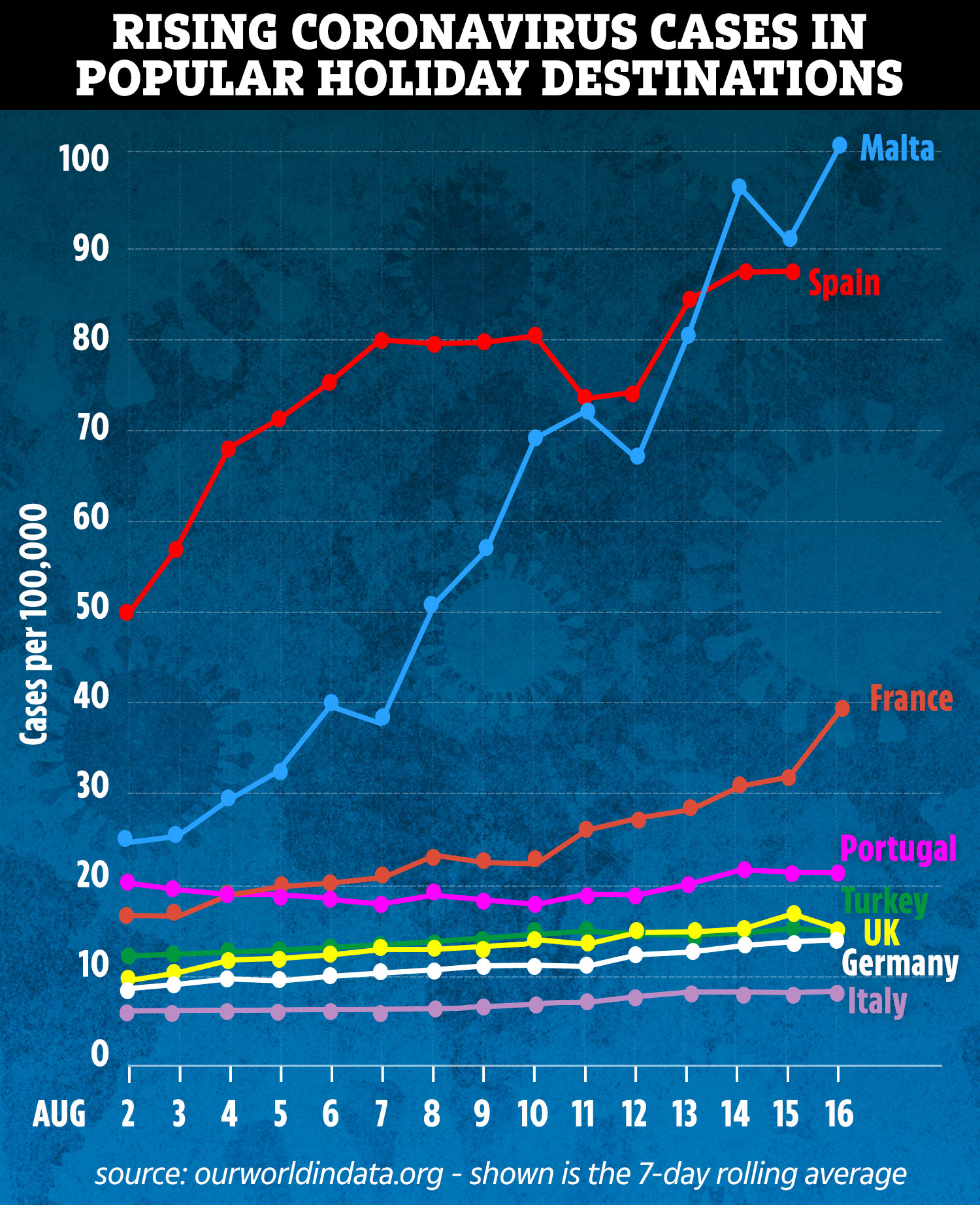 And those arriving in Greece across its land borders, as well as those flying in from several European countries, will have to provide proof of a negative coronavirus test before being allowed in.

The test must be performed up to 72 hours before entering the country, and Greek citizens are also obliged to present a test.

Visitors from the UK are currently exempt from this requirement.

Gkikas Magiorkinis, an assistant professor of hygiene and epidemiology at Athens University and one of the country’s top infectious disease experts, said this week that Greece was at a crossroads in its battle against the disease.

He told the Guardian: “We can say that Greece has formally entered a second wave of the epidemic.

“This is the point that we could win or lose the battle.”

Magiorkinis added that cases could surge to 350 a day if the “dramatic increase” continued unabated.

In response to the recent spike, the southern Italian region of Puglia announced residents will have to self-isolate for 14 days if they have travelled to Greece.

It came after a number of recent infections were traced back to returning holidaymakers.

The latest news comes after thousands of Brits gambled on Greece in a last-ditch bid for a summer holiday after Spain was put on the UK's quarantine list last month.

Crete, Corfu and Santorini overtook Barcelona, Ibiza and Malaga in the top 10 most sought after routes compared to this time last year, data from bookings website Skyscanner showed. 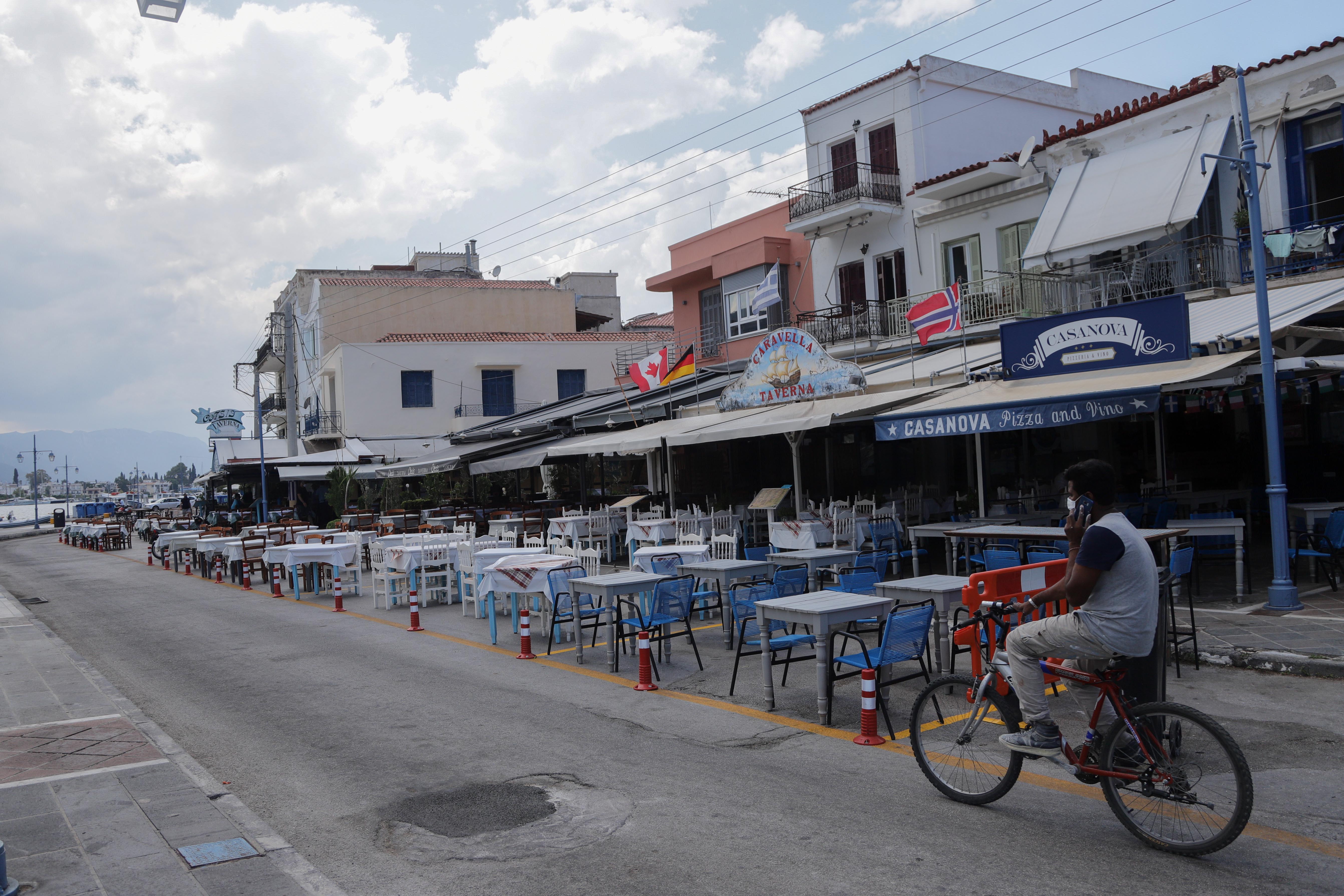