Home » World News » ‘Yes, yes we’re out again!’: Dance floors light up as Melbourne gets its groove back

Shortly after 7pm on Friday, four joyous songs into Sunshine and Disco Faith Choir's first set, a sole reveller at The Night Cat in Fitzroy rose from their seat and stirred a pre-pandemic memory – an act only months ago that had been unthinkable and, only days ago, illegal.

From behind the decks and psychedelic gowns of her band, DJ Sunshine saw fleeting uncertainty in the seated crowd, conditioned for masks and Zoom parties through two lockdowns and an eight-month ban on group dancing. 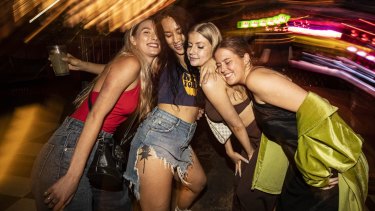 Katheine Bird (far left) with friends dancing the night away at the nightclub Pawn and Co in Greville street Prahran.Credit:Meredith O’Shea

"This person stood up to dance and everyone just looked at them. Then they all stood up. And it was just so exciting," the veteran DJ said after Friday's show, the first dance event at The Night Cat since venues were given permission to reopen their dance floors last week.

"It was almost like they couldn't believe it. I mean, it's all just happened in the last week. Up on stage you can feel the emotion of the crowd. People are looking around: 'Yes, yes, we're out again'.

"From then on, it was just in sync and a real party energy."

Similar scenes were playing out on reopened dance floors in bars and clubs across Melbourne. 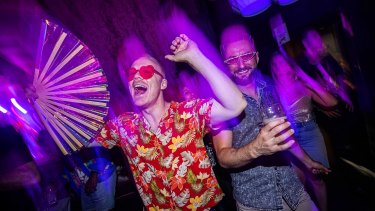 David Butler and Dan Gariepy keeping cool while dancing at the Night Cat in Fitzroy.Credit:Meredith O’Shea

On Chapel and Brunswick streets, lines formed outside the doors. Taxi drivers, struggling since March, were again unloading dressed-up party-goers.

The scene was familiar, but different. QR codes for contact tracing purposes greeted people at clubs' doors and only a maximum of 50 people were allowed onto even the biggest dance floors.

For most of the late-night crowd on Friday, these were small matters.

"Having all this built up energy and not being able to express yourself for so long has been really hard. Dancing is a release. It's engaging," said Katherine Bird, motioning to another dancer at South Yarra's Pawn and Co.

"This girl here, I've never met her before in my life. We were just dancing and she was kind of dancing over there and we looked at each other and it was just 'come over here'."

The relaxation of the rules don't mean the end of financial trouble for the night-time economy, which before the pandemic was worth more than $3.5 billion in the City of Melbourne council area alone.

Pawn and Co general manager Michael Clarke-Tokely said he could normally allow 380 people in the club at any one time. For the foreseeable future, that number is just 128.

Security and bar staff have to double as health officers to ensure people are following COVID-safe rules, he said. Then there is the problem of finding staff at all amongst a workforce depleted of backpackers and international students. 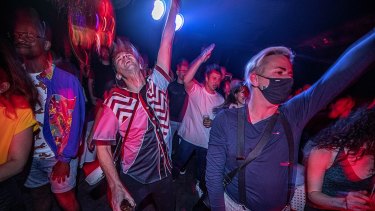 Lance and Luke dance at The Night Cat. Luke still wears his mask as a precaution. Credit:Meredith O’Shea

Mr Clarke-Tokely was working 70-80 hours a week to fill the void.

But people were dancing again, he said, and that was a start.

"There's obviously an underbelly to the nightclub world but there's this beautiful positive energy as well, and that's what keeps people coming back," he said.

"It gives them a release. It breaks up people's week and life a little bit. You've spent your money, your girlfriend's dumped you, but there's a point in the night where you can throw your hands in the air and none of that matters, even if it's just for a few seconds."

At the end of each day, we’ll send you the most important breaking news headlines, evening entertainment ideas and a long read to enjoy.  Sign up here.